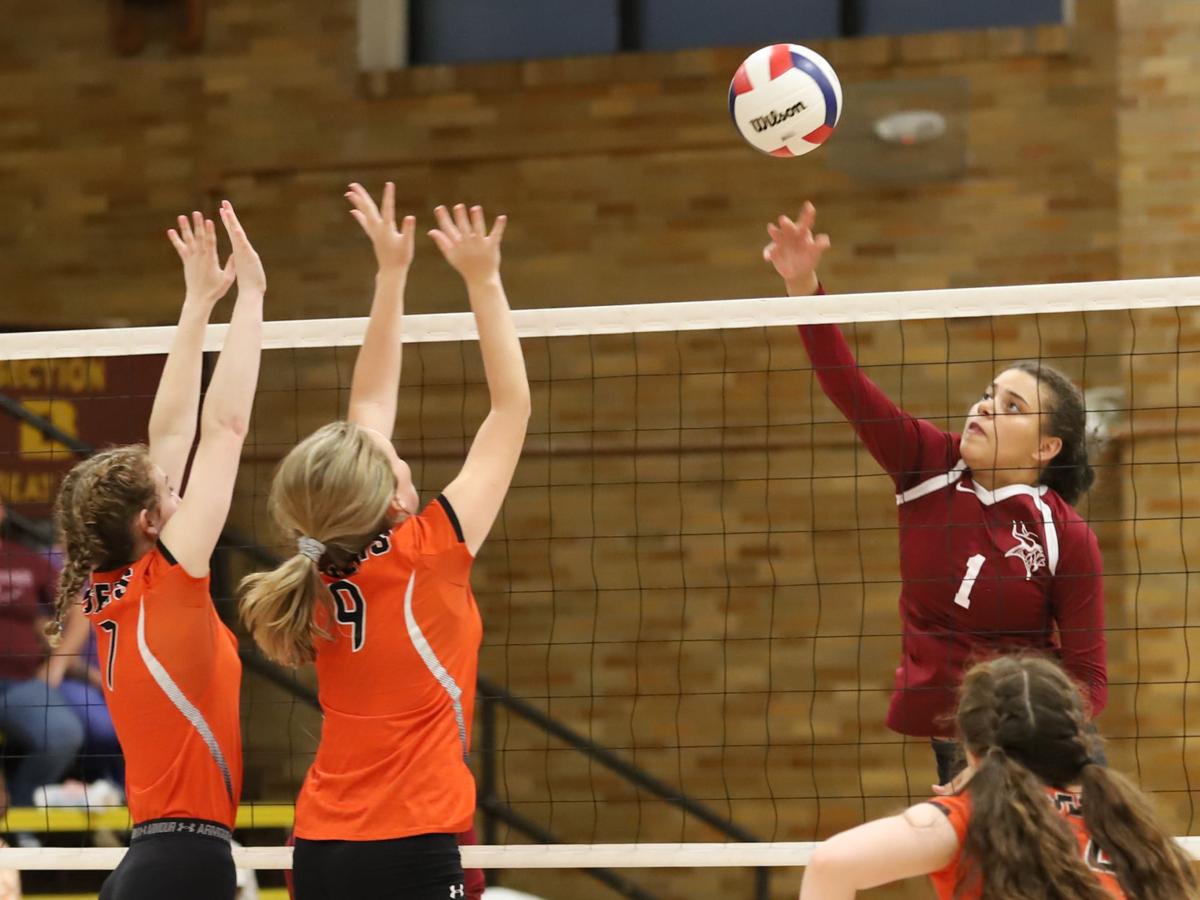 Danville’s Talia Clemons (1) attempts to hit the ball past the block of Westville’s Maizy Lawnicki (7) and Chloe Brant (9) during the first set of Wednesday’s match at Danville High School. The Tigers rallied to beat the Vikings 19-25, 25-20, 25-18. 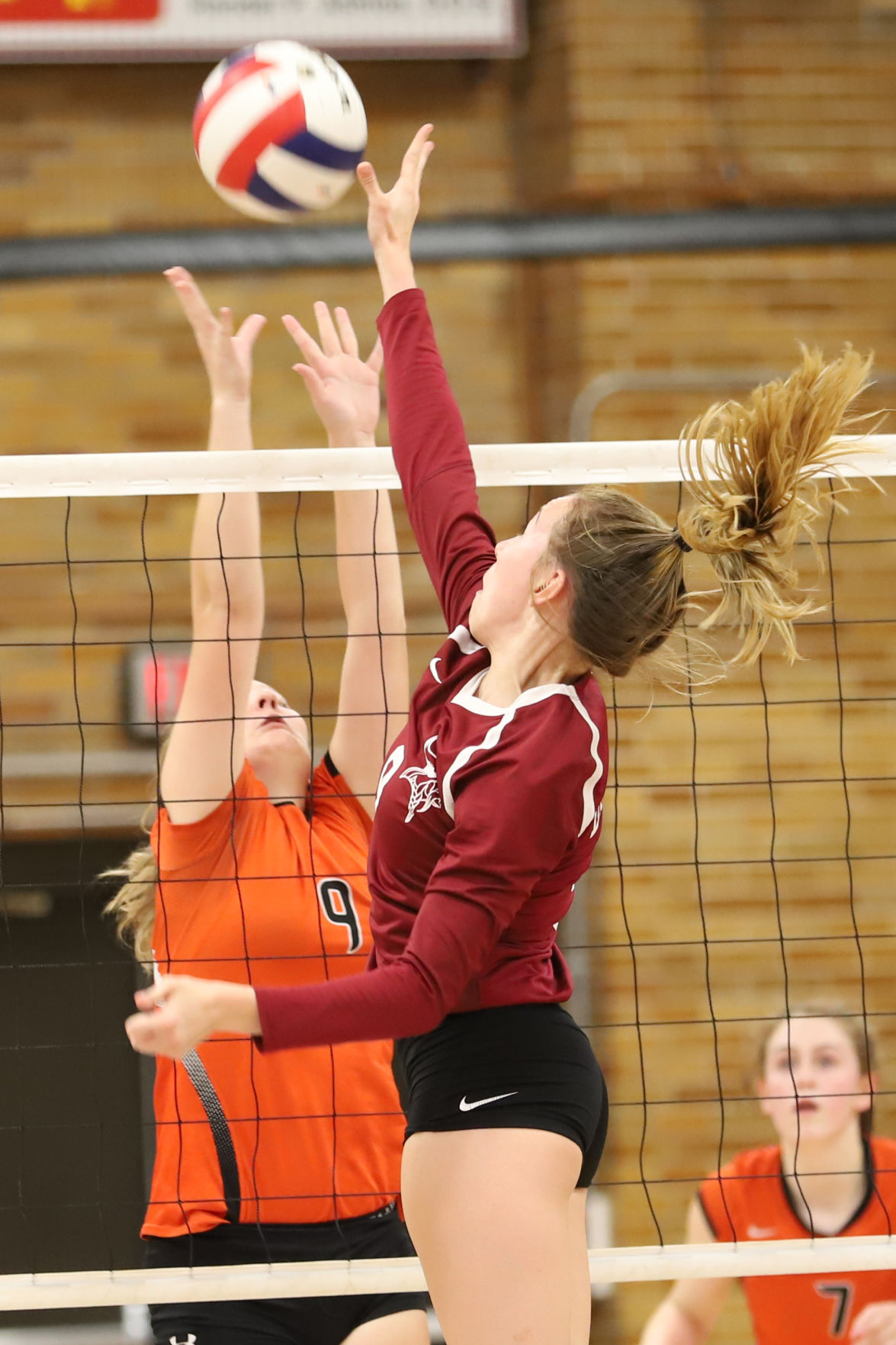 Danville’s Talia Clemons (1) attempts to hit the ball past the block of Westville’s Maizy Lawnicki (7) and Chloe Brant (9) during the first set of Wednesday’s match at Danville High School. The Tigers rallied to beat the Vikings 19-25, 25-20, 25-18.

DANVILLE — Westville coach Carla Wheeler is just two matches into her career with the Tigers, and her team is already testing her health.

For the second night in a row, Westville rallied after dropping the first set to pull out a three-set victory. This time it was against the Danville Vikings as the Tigers claimed a 19-25, 25-20, 25-18 triumph.

“I think they want to give me a heart attack,’’ Wheeler said. “We are definitely comeback kids and we will own it.’’

Wheeler, who admittedly acknowledges that she hadn’t see her team play before taking the job, says it seems like in both matches that her girls just turned it on after losing the first set.

“It’s like we are an engine and we just need to get warmed up,’’ she said. “Once we do, we get in sync and we’re good

“Tonight, everything just came into place after that first set. They were communicating better and they played with a little more confidence.’’

The opposite was true for Danville.

The Vikings, who had 10 kills and three blocks in the opening set, struggled with numerous hitting errors and passing mistakes in the final two sets.

“Our communication dropped off and our aggressiveness dropped over,’’ said Danville coach Amber Galleguillos. “We stopped controlling the game and we started participating rather than initiating.’’

In the third and decisive set, Westville and Danville traded the lead four times before the Tigers took it for good on back-to-back kills from sophomore Jasmyn Meeker, who had four of her game-high nine kills in the final set.

“She has really been an unexpected surprise,’’ Wheeler said. “I really thought she was going to be a setter only for me, but she has been an all-around good player.’’

Danville was never never able to get closer than two points (17-15) for the rest of the set.

“We graduated five senior from last year’s team and this is almost a brand new team coming into varsity,’’ Galleguillos said. “We have to get them into the mindset that they are now the big show. We need them to be aggressive and be comfortable with being aggressive.’’

Savanna Rudy, who had a team-high eight kills, along with Hallee Thomas, who had 21 assists, and Kaitlyn Loewenstein are the only players with significant varsity experience for the Vikings.

“This is a big year for development,’’ Galleguillos said. “We need to develop speed and we need to develop a connection between our setter and the hitters, so that when we run quicks, we are not having the misfires that we’ve had. We also need better communication in the back row.’’

And how does Danville (0-2) move forward?

Wheeler is hoping that her Tigers are able to capitalize on the momentum of back-to-back three-set victories to open the season.

“I will take three-set victories every time,’’ she said. “It’s almost like we have to get mad to play our best volleyball.

“These girls have the skill, they just need to rely on it.’’

Sorry, there are no recent results for popular articles.