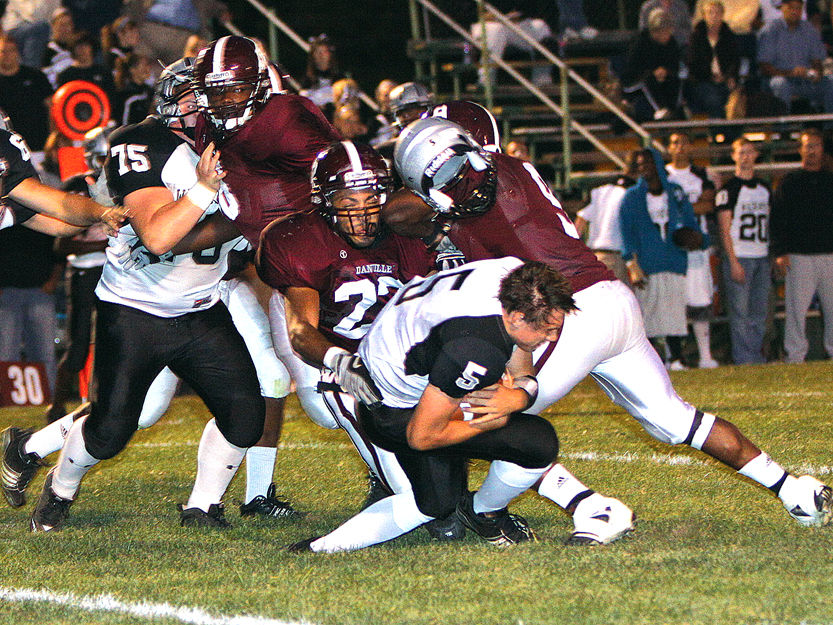 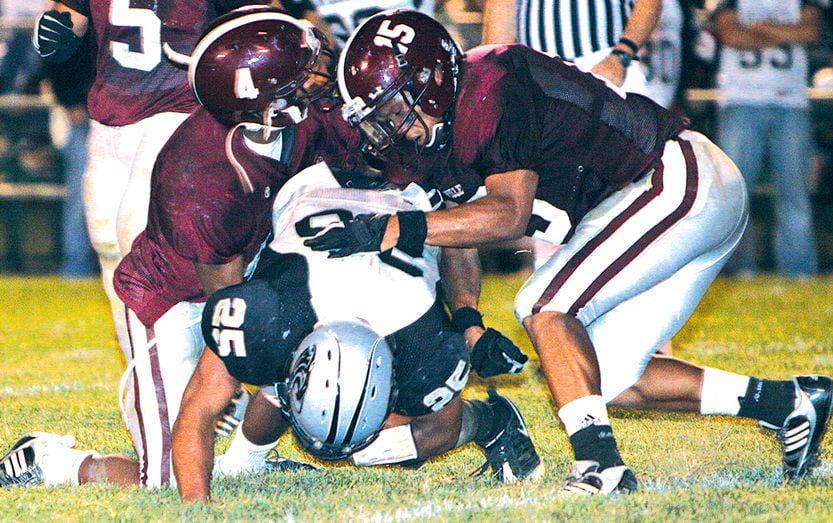 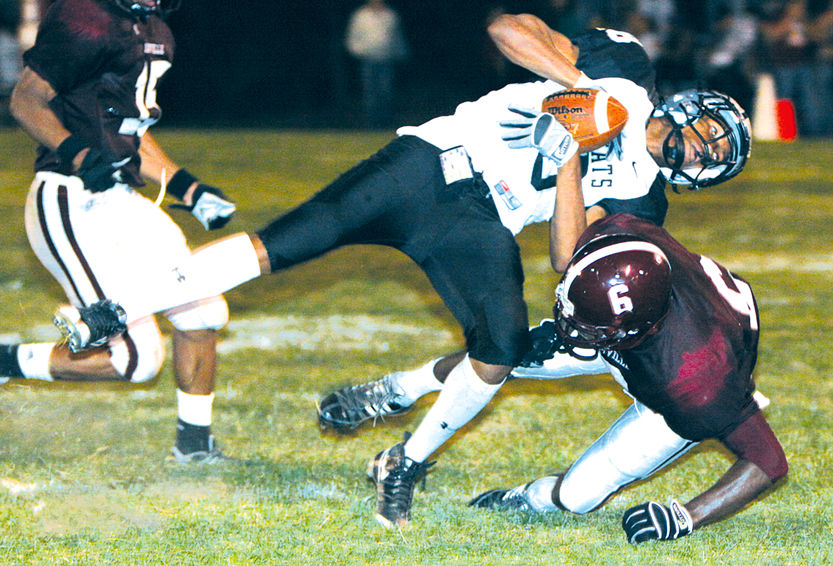 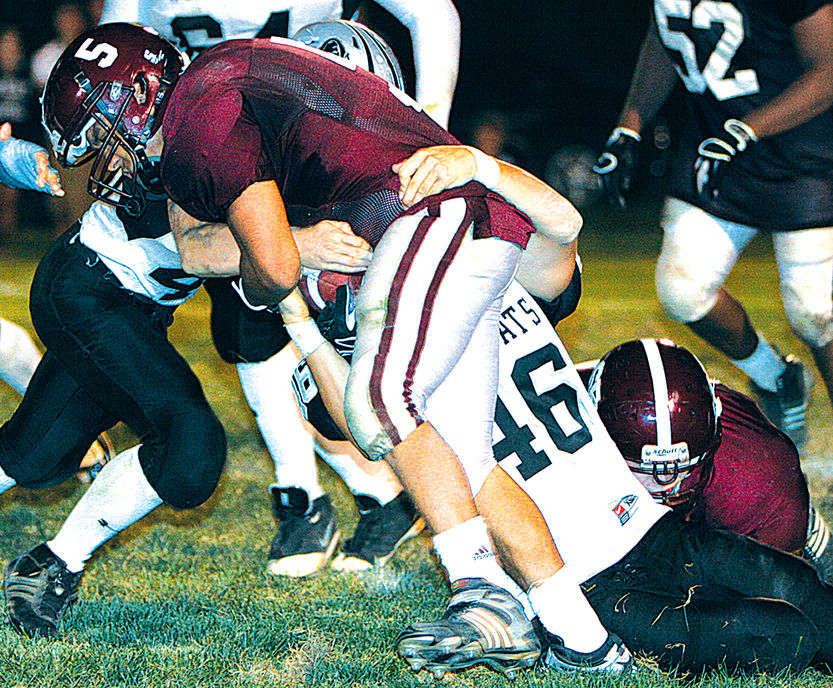 There is no doubt that the Danville defensive unit earned the game ball from Friday’s 26-0 victory over Normal West at Ned Whitesell Field. Not only did the Vikings pitch their first shutout of the season, they also forced eight turnovers — four fumbles and four interceptions — in the Big 12 contest with the Wildcats. Danville junior safety Eddie Clark was the main villain of Normal West’s offense as he had three fumble recoveries and two interceptions. “We just came out and played hard,’’ said Clark, who returned one of his three fumble recoveries 40 yards for a second-quarter touchdown. “We did what our coaches told us to do. “As a defense, you want to create turnovers and make stops.’’ That’s exactly what the Danville defense did on Friday night. Normal West had the ball for 12 possessions, four ended with interceptions, two ended with fumbles, five ended with punts and the last possession ended as time expired. “We found a way to stop them every time,’’ said Danville senior linebacker Quintin Brown “Not letting them score is a big thing for the defense.’’ Not only did the Vikings (4-0) keep the Wildcats out of the end zone, but the Danville defensive unit turned two of Normal West’s eight turnovers into touchdowns. “It’s has been our Achilles heel,’’ Normal West coach Darren Hess said of his team’s turnovers. “We’re inexperience in some spots and that has been getting us about every week. “Against great football teams like Danville, you are not going to be able to do that.’’ Clark had the 40-yard fumble return in the second quarter and linebacker Derrick Cunningham had a 29-yard interception return in the third quarter. It’s the third straight game for the Vikings to have an interception return for a touchdown. “I think both the shutout and the eight turnovers sound pretty good,’’ Cunningham said. “But, I think the shutout sends a message that we are trying to prove that we are one of the best defenses in the Big 12 Conference.’’ And Cunningham pointed out that Danville’s defense scored just as many points (12) as did the Vikings offense. “Defense saved the day,’’ said the senior wide receiver. “Actually, the defense won the game.’’ And, according to Danville coach B.J. Luke, that is going to happen during a football season. “You are going to have games where one segment of the team will pick up the other segment,’’ he said. “We still made a couple big plays on offense. “But defense ruled the day, making plays, making turnovers. They really kind of dominated the game.’’ Normal West was held to just 226 yards of offense and senior running back Jamarr Simon just missed in his attempt for a fourth consecutive 100-yard game. Simon was held to 99 yards on 21 attempts. “The neat thing to see was the hitting,’’ Luke said. “It was extreme and we want to be known as a hard-hitting team. “We want teams to know that when they come to play Danville, you better bring your helmet, because it’s going to be a tough game.’’ Both of Danville’s offensive touchdowns came on scoring strikes from quarterback Malcolm Anderson to wide receiver Clowzell Adams. The first one, a 39-yard toss, gave Danville a 7-0 lead just three minutes into the second quarter, and the second one, a 31-yard pass, made it 26-0 in the fourth quarter. “Defensively, we played well, but we gave up a big play in the second quarter and one in the fourth,’’ Hess said. “As Danville went through their growing pains a few years ago, we are doing that right now. “I appreciate how they play. They play it the right way, they are very physical and their athletes make plays. You can see their maturity where ours is a little lacking.’’ Those two plays accounted for 70 of the Vikings 194 yards of total offense and it left the Danville offense a little upset. “If it wasn’t for our defense tonight, we wouldn’t have gotten this ‘W’,” Danville senior guard Alex Janssen said. “We think that we have such a good offense, but we are not playing not even close to as good as we can play. “It might have been blocking. It might have been running. It might have been passing. It just wasn’t clicking and it needs to start.’’ Luke admitted things were still a little choppy with his team’s offense. “We still have time to get that cleaned up,’’ he said. “We are just searching for that consistency. “It’s like shooting baskets. There are games that you are really hot, and tonight, we were just a little off.’’ With the victory on Friday night, the Vikings remain undefeated in the Big 12 Conference play. Decatur MacArthur can join Danville at 4-0 in league action with a win today over Decatur Eisenhower. Those are the next two teams on the Vikings schedule as Danville travels to Eisenhower next Friday for a 7 p.m. contest.