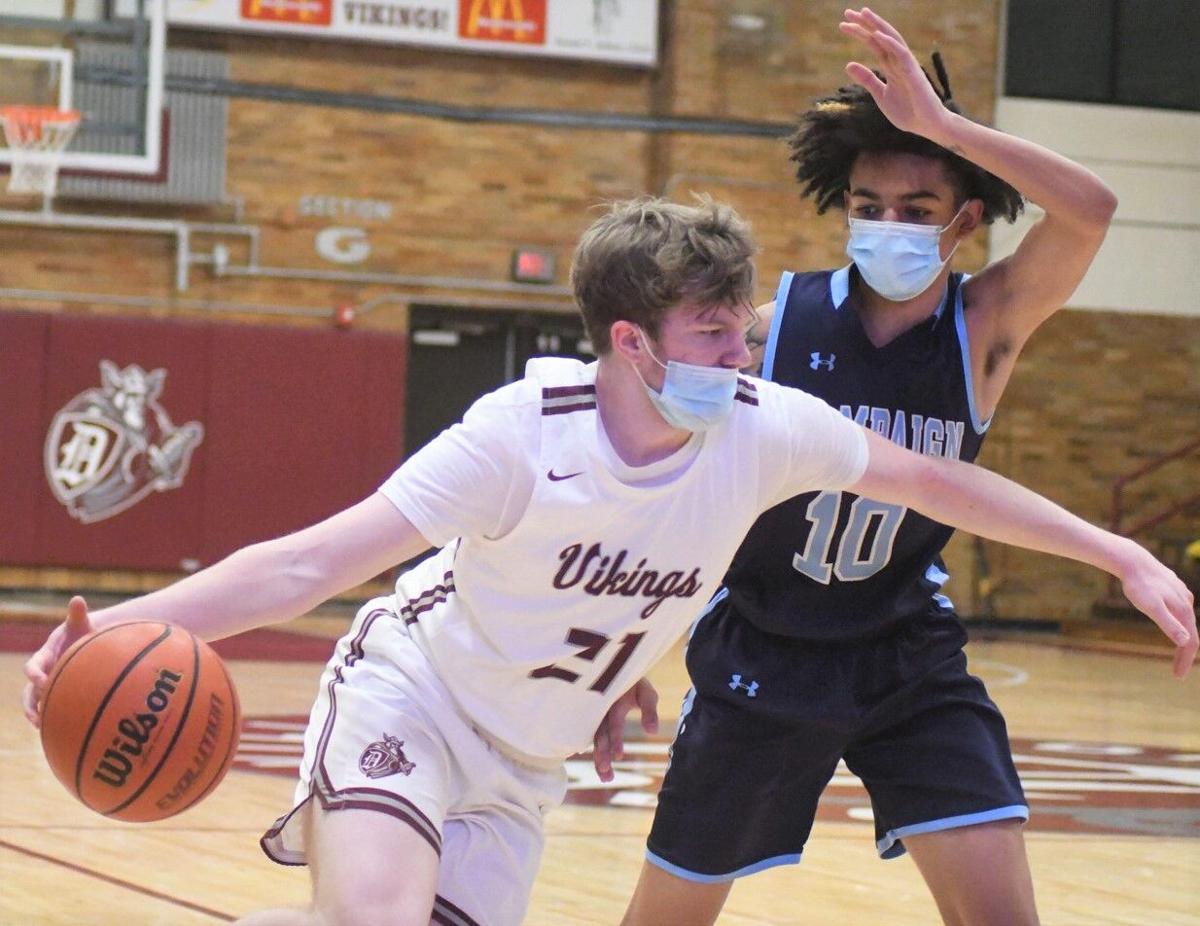 Danville’s Jonathan Ireland drives the ball past Champaign Centennial’s Deontrae Warren in the second half of Tuesday night’s game at Danville. Ireland had a career-high 13 points as the Vikings beat the Chargers 59-49. 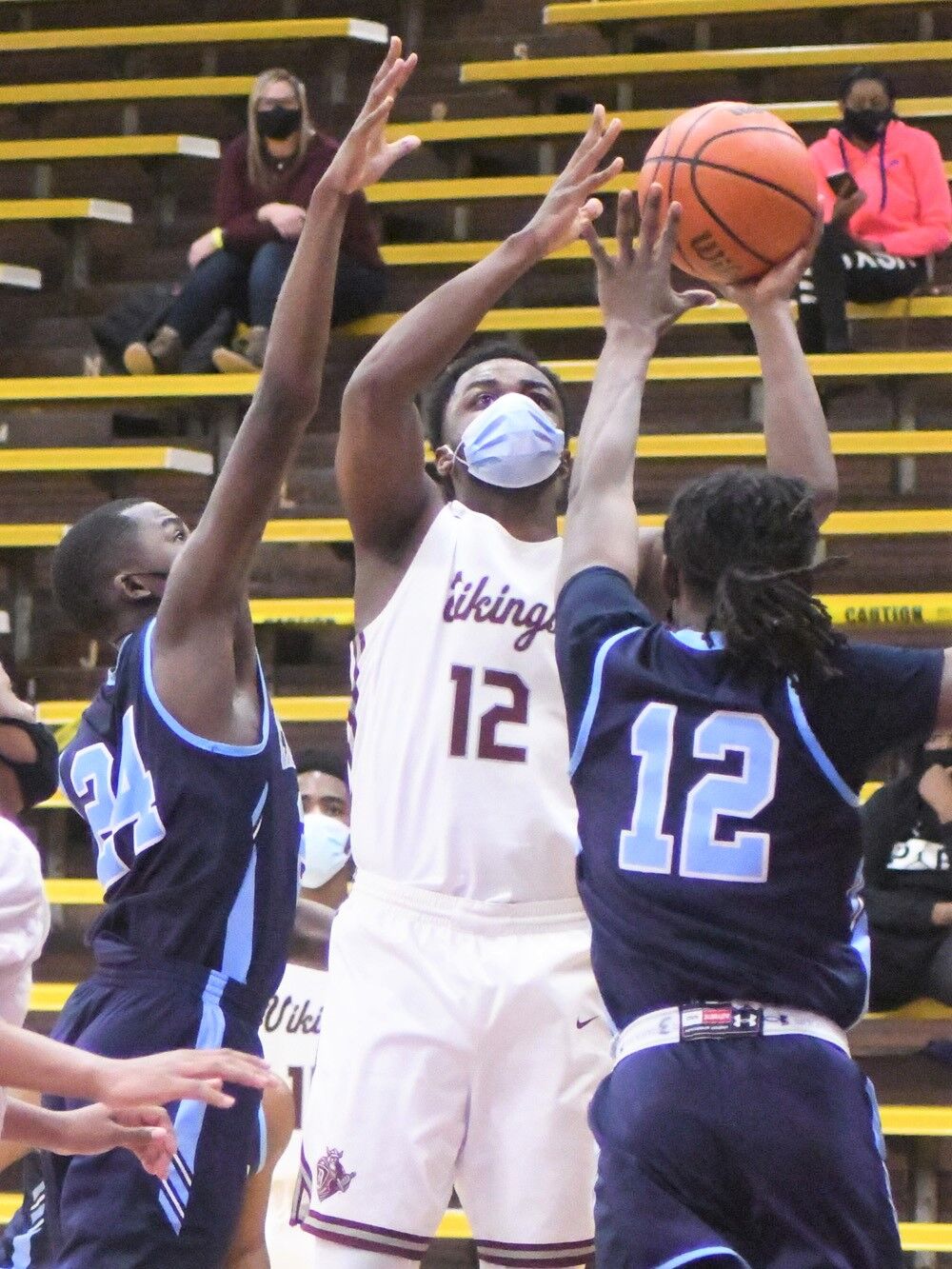 Danville’s Nathanael Hoskins shoots for the basket between Champaign Centennial’s David Laby and Conley Dee during the second half. Hoskins ended up with a team-high 16 points.

Danville’s Jonathan Ireland drives the ball past Champaign Centennial’s Deontrae Warren in the second half of Tuesday night’s game at Danville. Ireland had a career-high 13 points as the Vikings beat the Chargers 59-49.

Danville’s Nathanael Hoskins shoots for the basket between Champaign Centennial’s David Laby and Conley Dee during the second half. Hoskins ended up with a team-high 16 points.

DANVILLE — After a quick start, the Danville boys basketball team faced the grind on Tuesday.

With Champaign Centennial focusing much of their defense to stopping seniors Tevin Smith and Nathaniel Hoskins, it was time for the younger players to step up and shine.

With big contributions from underclassmen, the Vikings found a way to win with a 59-49 win over the Chargers.

“Centennial is a tough team to play and coach (Tim) Lavin does a great job with them,” Danville head coach Durrell Robinson said. “They won’t beat themselves and you have to stay focused for the whole 32 minutes of the game. My guys did a good job responding and made plays when they needed to.”

The game didn’t seem like it would end up to be a grind at the start of the game, when the Vikings hit three straight 3-pointers to take a 9-0 lead with about two minutes gone in the first quarter.

“It’s a game of runs and we came out real hot and making shots,” Hoskins said. “We started to get a little laid back after starting so hot and that is what got them to come back and we have to get ourselves together and realize that it is a long game.”

But the Chargers would use defense and their inside play to get close and would only be down 16-14 when the quarter ended.

“It’s a gift and a curse. You have a strong start and hit 3’s to start the game and then we fall in love with the shot,” Robinson said. “You also get a sense that you are making it easy, but it is not. I compare the Big 12 to the Big Ten. No one is going to be a walk-through game. Everyone is going to be competitive you have to bring your hat to every game.”

The second quarter was a quick, but slow affair as Danville outscored Champaign Central 8-4 to take a 24-18 halftime lead.

“Every time we play Centennial, it is a grind it out game,” Hoskins said. “In the second quarter, both teams seemed very sluggish and we just have to get past that and play hard.”

In the third quarter, junior Jonathan Ireland led the way with eight points of his career-high 13 points as the Vikings continued to keep the lead.

“They were leaving me open, so I would go to where they can see me when they were driving and I took some shots and they were going in today,” Ireland said. “It was a pretty good game overall. We have a lot of firepower off the bench and when people like O’Shawn (Jones-Winslow) starts, they find a way to get open. Martez (Rhodes) is also open and he can hit shots as well. We have a good shooting team and we can hit from anywhere.”

“They are putting in a lot of minutes and making some good plays,” Hoskins said. “Johnny is doing a good job the last few games in getting a handle of the rhythm of things and knocking down shots. When they focus on us, it takes the pressure off of them and they can go ahead and they can make those open shots.”

Centennial continued to make things close, but Hoskins scored nine of his 16 points in the fourth to clinch the game.

Michael Moore ended up with 10 points, while Smith had nine, Rhodes had six and Emersen Davis added five points.

“Tevin is going to attract a lot of attention because he is one of the top players in the state, so a lot of teams are going to focus on him,” Robinson said. “I am proud of him because he did other things like rebounding and defense and showing that he is a complete player.

“We have two great seniors in Tevin and Nathaniel and we have seniors like Michael Moore that stepped up, but we have these younger guys that as the season has gone on, they are getting more repetitions and are gaining more confidence and that is going to be a building block because those seniors are not going to be around forever, so we need other guys that need to step up and maintain and keep elevating the program.”

Deontrae Warren led the Chargers with 10 points, while Jack Young Jr. had nine and Travis Makabu and Jaylen Bryson each added eight.

The Vikings are 5-1 and will start a tough stretch on Friday with a home game against Normal West. That will be followed by Saturday’s game against Peoria Manual, Champaign Central on Monday, Rantoul next Tuesday and Peoria Notre Dame next Thursday.

“I just keep saying that it’s the pandemic season,” Robinson said. “I am happy that the guys got a chance to play this year and we are taking everything we are given and we are blessed to play.”

“Friday is going to be tough with Normal West,” Ireland said. “Manual lost their top player, but they still have talent, so it will be a tough game As long as we play good defense and shoot well, we should be good.”

The Danville junior varsity team also had to grind out a win, beating Centennial 53-51. Javion Smith led the Vikings with 19.