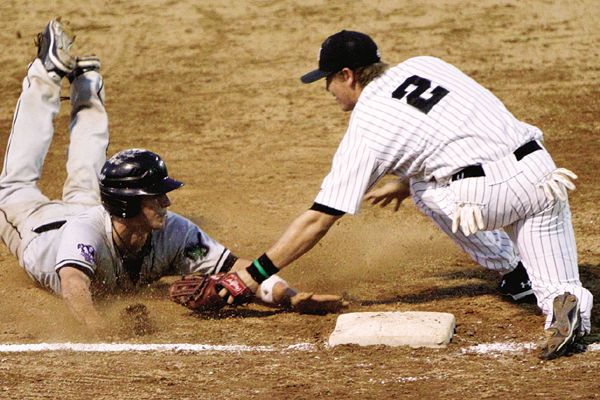 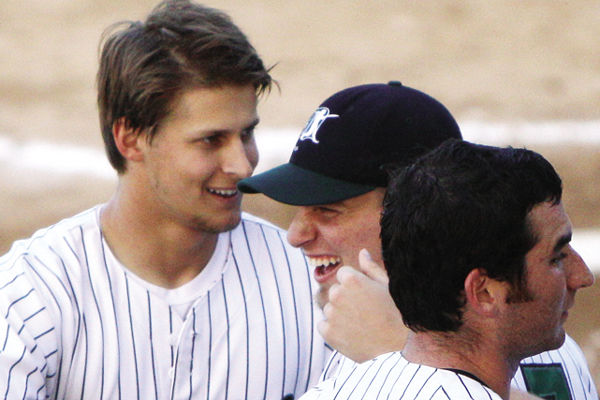 Ryan Van Amburg, left, gets congratulations from Donavan Drake (with hat) and Jason Nappi after his three-run home run, which gave the Dans all the runs they needed in a 3-1 win over the Dragons.

Ryan Van Amburg, left, gets congratulations from Donavan Drake (with hat) and Jason Nappi after his three-run home run, which gave the Dans all the runs they needed in a 3-1 win over the Dragons.

Living in Meridian, Idaho, Glenn and Joann Van Amburg have not had many opportunities to see their grandson, Danville Dans left fielder Ryan Van Amburg, play collegiate baseball. On Thursday night at Danville Stadium, Glenn and Joann had the perfect seats as Ryan belted a game-winning 3-run homer in the fourth inning as the Dans beat the DuPage Dragons 3-1. Not only was it the first home run of the season for Van Amburg, a sophomore-to-be from Pepperdine, but the three RBIs were also his first of the season with the Dans. “It felt pretty good to make contact like that,’’ Van Amburg said. “And, it is kind of special considering that my grandparents are here along with my mom (Barbara) and my dad (Keith). “This is the first time that my grandparents have been able to see me play collegiate baseball.’’ Van Amburg’s blast over the left-field fence came on the first pitch he saw from DuPage starter Steve Sabatino after popping out in the second inning. “He got me an inside fastball on that first at-bat,’’ Van Amburg said. “I was sitting on that exact pitch when I went up there the second time, and sure enough, he threw me that pitch.’’ While his grandparents and mom just got into town this week, Ryan’s father, Keith, has seen nearly every game to start the year. A week ago, his dad saw something while Ryan was hitting in the cage. “He noticed that I was pulling off the ball,’’ Ryan said. “Ever since then, I’ve been working on staying closed on the ball and I feel like I’m hitting the ball better.’’ While Van Amburg came up with the big hit, the hottest batter in the Danville lineup is first baseman Dabo Worthington. He had three of his team’s four hits on Wednesday, with a second-inning single, a fourth-inning double and sixth-inning double. Worthington leads the Dans with 18 hits and his batting average (.462) is the best in the Prospect League. “Dabo is having a great approach this season,’’ Danville manager Pete Paciorek said. “He goes up to the plate with a plan and he is executing that plan. “It’s nice to have him in the middle of our lineup and swinging the bat like he has done.’’ While Worthington and Van Amburg took care of the offense on Thursday night, right-hander Matt Smith tossed six shutout innings to get his second win. The 6-foot-3 senior-to-be from St. Leo University in Florida wasn’t so sure it was going to be a good night for him when he warmed up. “I didn’t feel right in the bullpen,’’ he said. “I was just hoping that I could go out there and battle my way through four or five innings.’’ Instead, he had the longest outing of any Danville pitcher, allowing just two hits in six innings, while throwing an unofficial 75 pitches. “Matt isn’t a pitcher that is going to throw 90 mph and blow it past everyone,’’ Paciorek said. “He is a guy that attacks the strike zone. He has confidence in what he is going to throw and that is going to take him a long ways.’’ Smith acknowledged that Thursday’s weather — hot and humid — was more to his liking. “This was more like a spring day in Florida than those winter days we’ve been having,’’ he said with a smile. With back-to-back wins, the Dans are now 6-6 with a pair of home games this weekend against the Springfield Sliders. Former St. Louis Cardinal slugger Jack Clark is the manager of the Sliders, while former Redbird hurler Danny Cox is their pitching coach. Both tonight’s game and Saturday’s game begin at 6:30 p.m. Note — Former Danville Dan infielder Denny Duron (2006) signed a contract this week with the Texas Rangers. Duron, who played collegiately at Pepperdine, will report to the Rangers short-season Class A team in Spokane, Wash.