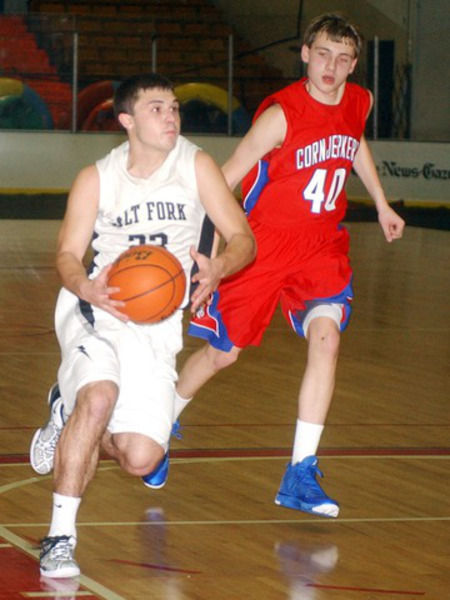 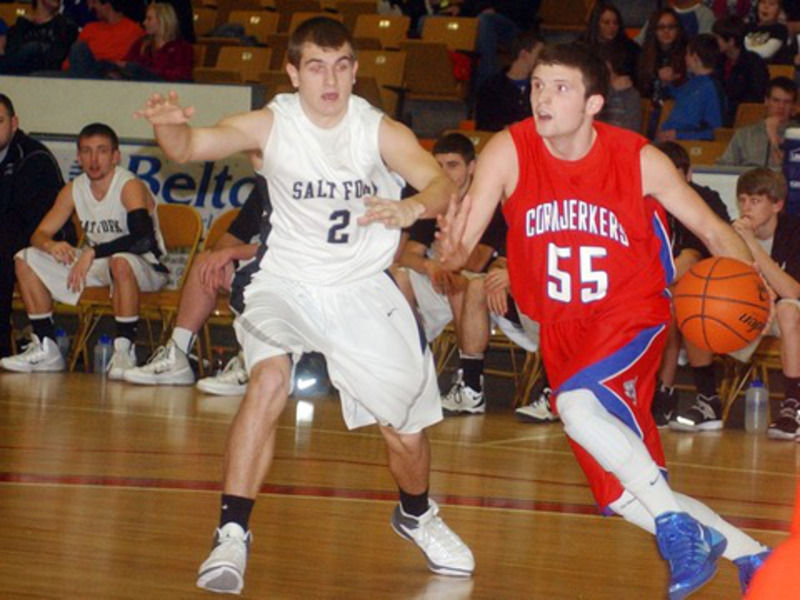 DANVILLE — After a slow start that saw Hoopeston Area take a 22-21 halftime lead, the Salt Fork basketball team came back with the right offense and defense to get a 46-36 win over the Cornjerkers in Saturday’s third place game at the Vermilion County Tournament.

At the three minute mark of the third quarter Hoopeston Area guard Brennan Crose (seven points) hit a jumper to give the Cornjerkers a 31-28 lead. That was the last field goal the Cornjerkers would make until the 1:34 mark of the fourth quarter by Bryce Leigh (six points) when he made a 15-foot jump shot from the left elbow.

During that span, the Storm went on a 15-1 run led by senior Cole Taylor (14 points, 11 rebounds) with good board work and a strong defensive presence to lead 43-32.

“Coach said we needed to step up our defense in the second half and I feel we did that as a team,” Taylor said.

The Cornjerkers couldn’t get many shots to fall in the second half as the Salt Fork Storm defense tightened up.

“I thought we did a good job of defending in the second half and we rebounded the ball really well tonight,” Salt Fork coach Andrew Johnson said.

The Cornjerkers got within seven late in the game but could get no closer as the Storm stretched the lead back out to ten.

“Moving forward we are going to look to get our offense on track and keep improving our defense,” Johnson said.

The backboards were very lopsided as the Storm held a 32-18 advantage.

“As a team we have been in a shooting slump as of late and Coach Johnson said we need to hit the boards more and get some easy putbacks and tonight I think we did that,” Taylor said.

As the game began, both teams were shooting the ball well — especially Hoopeston Area — who was 6-of-9 from the floor for 67 percent and an early first quarter lead of 12-9.

With good defense and some easy putbacks by the Storm’s Max Stutsman (11 points, nine rebounds) and Ross Learnard (13 points, five rebounds) they were able to keep the game close in the first half.

“We need to improve offensively, we have been a little stale with it lately, but it was good to see better production tonight from different players,” Johnson said.

The Cornjerkers kept their hot shooting going in the second quarter and finished the half shooting 10-for-17 for 59 percent, but only led the Storm 22-21.

of Williamsport,Judy N. Clawson, 76, died June 30, 2020 at Williamsport Nursing & Rehabilitations. Cremation requested and there will be a family memorial service at a later date. Shelby Funeral Home is assisting the family.

DANVILLE - Melvin D. Huffman passed this life on July 2, 2020 at his home. Mel was born on September 26, 1937 the son of Forrest L. and Luciene (Claypool) Huffman in Danville, IL. He married Joan Talbert on June 29, 1974 and she survives of Danville. Survivors include his wife of 46 years, J…