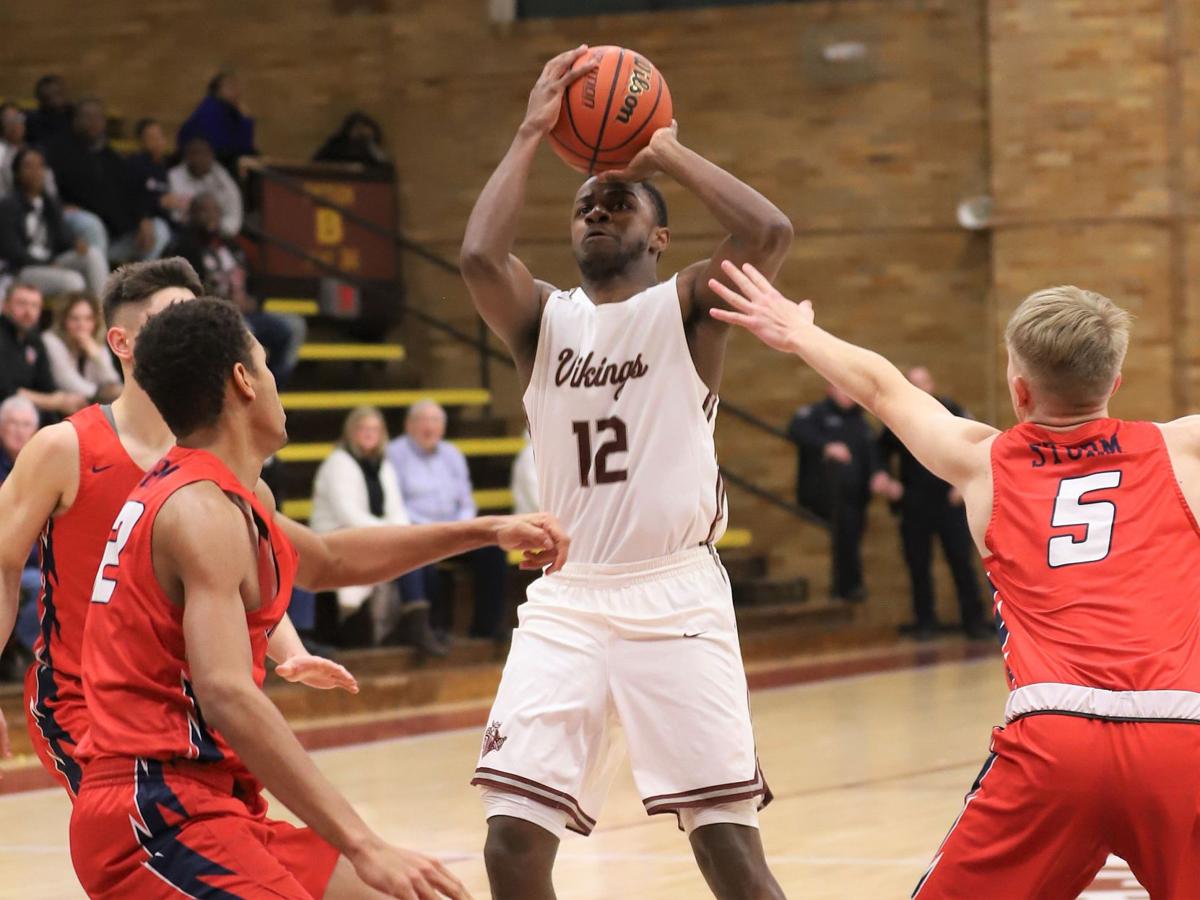 Danville Viking junior Nathanael Hoskins shoots over a host of South Elgin Storm players in the first half of the Watch Fire Shootout game Saturday at Danville High School. 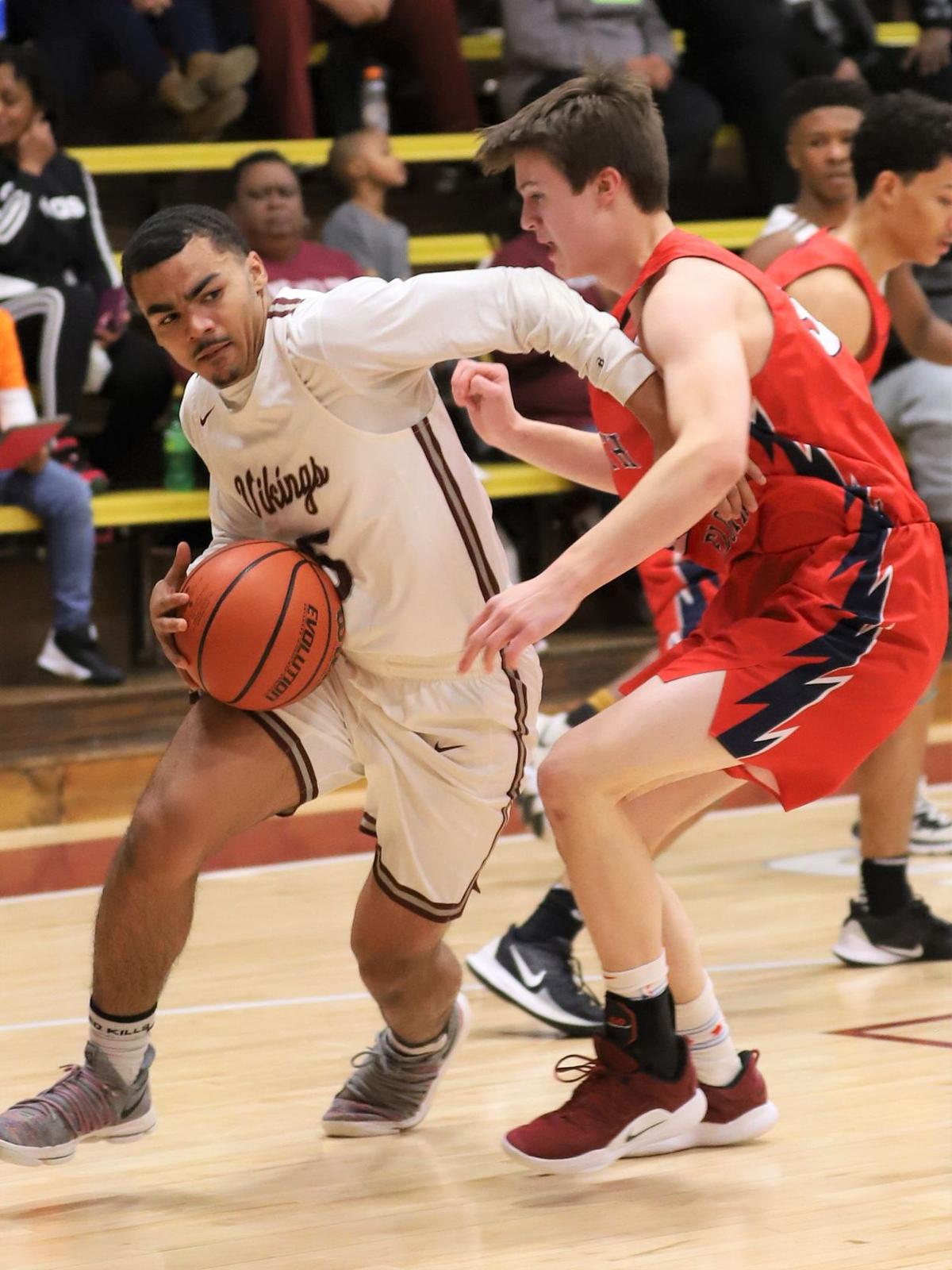 Danville Viking junior Nathanael Hoskins shoots over a host of South Elgin Storm players in the first half of the Watch Fire Shootout game Saturday at Danville High School.

DANVILLE — The inaugural Watchfire Shootout occurred on Saturday, February 14th at Danville High School. The tournament consisted of five games. The Danville Vikings played in the final game of the shootout against the South Elgin Storm in a Class 4A boys basketball contest. Danville came into the game at 13-14 overall and 4-5 in league play. South Elgin came in at 11-16 and 7-8 in the league.

The Vikings jumped out to a quick lead. Robert Stroud got the scoring going for Danville. An Iggy First free throw, a Nathanael Hoskins two-point basket, and a Devin Miles basket through contact put the Vikings up 9-0 early.

In the first quarter, baskets by John Aaron Wafford, Dylan Marquis, and a three-pointer from Jacob Pettineo pulled South Elgin within four points. A three from Hoskins and a basket from Martez Rhodes put Danville up by nine at the end of the first quarter, 16-7.

Danville coach, Durrell Robinson, credited his pressure defense for the fast start. “We got after it. We rotated very well. We dictated with our defense and sped them up. They’re a disciplined team, but they’re young and we took advantage of our speed and capitalized early.”

Danville extended its lead by four in the second quarter. Hoskins followed a hoop by Rhodes with two made free throws, and Delray Crowder added a bucket for the Vikings.

Drew Cwik was the primary contributor for South Elgin in the second quarter with five points, while Jacob Pettineo led the Storm in first-half scoring with six points. First led Danville with six second-quarter points, with Miles adding four points in the quarter, as Daville took a comfortable 32-19 lead into halftime.

To start the second half, South Elgin’s Lane Mcvicar hit a three-pointer, but on the next Danville possession Hoskins followed that up with a three-pointer of his own. Miles then knocked down a three for the Vikings, and that put him at the 16 point mark for the game.

Lane Mcvicar, Wafford, and Kendis Wiley all got buckets for the Storm as they cut the Viking lead to 41-30. Hoskins responded for the Vikings knocking down another three-pointer. Wiley would go onto to make a basket and then convert one of two free-throw attempts.

Miles and Hoskins immediately started the fourth quarter scoring for the Vikings. Wyatt Steurer scored a basket for the Storm and with 5:48 remaining, the Vikings led 50-35. Miles scored again for Danville and then Pettineo knocked down a three-point shot for the Storm. Wiley’s subsequent two-pointer cut the Storm’s deficit to 12. Hoskins made four free throws down the stretch for Danville in the final minutes of the game as the Vikings closed out a 66-47 victory over the South Elgin Storm.

Robinson noted he’s pleased with the progress his team has made. “We’re sharing the ball on offense. We’re doing a better job of trusting each other. As the season’s been going, we’ve been growing together.”

Wiley was the leading scorer for the Storm with 11 points with Pettineo adding nine points and Mcvicar with seven.

Miles and Hoskins combined had 44 of the 66 points for the Vikings, as they each scored 22 points.

Regarding the performance by Miles and Hoskins, Robinson said, “They’re returning starters and with Tevin Smith being out, they’ve emerged the way I wanted them to as far as leadership. They’ve been great, and it’s good to see them gain more confidence as the season goes along.”

In the first game of the day, Bismarck-Henning/Rossville-Alvin defeated Rantoul 66-43.

Drew Reifsteck had 27 points for the Blue Devils, while Elijah Tidwell had 12 points and Avery McConkey and Kaj Stanford each had nine points.

The Blue Devils will return to Vermilion Valley Conference action on Tuesday against Salt Fork.

67, of Westville, died Apr. 2, 2020 at OSF Sacred Heart Medical Center, Danville. His services will be private. Burial will be in Sts. Peter & Paul Cemetery. Sunset-Urbas Funeral Chapel of Westville assisted the family.