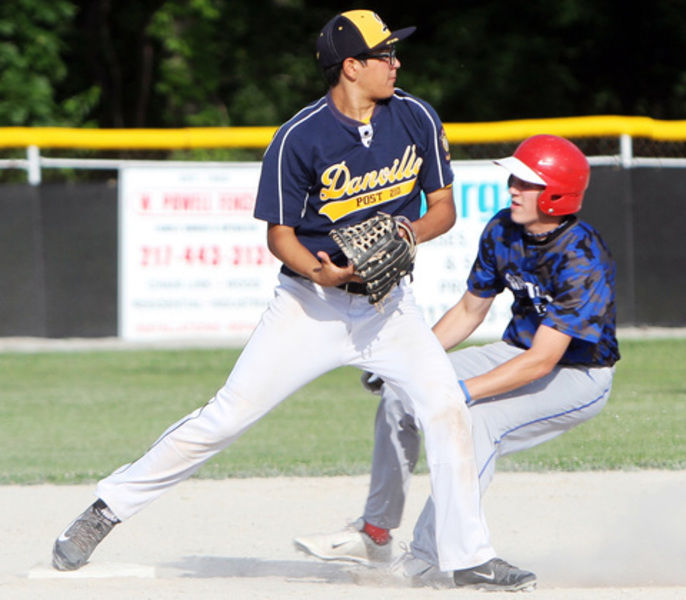 Post 210 shortstop Mark Strebin gets the out at second on Dustin Lard of Post 287 during a double play attempt in the first inning Friday at Larry G. Phillips Memorial Field in Tilton. 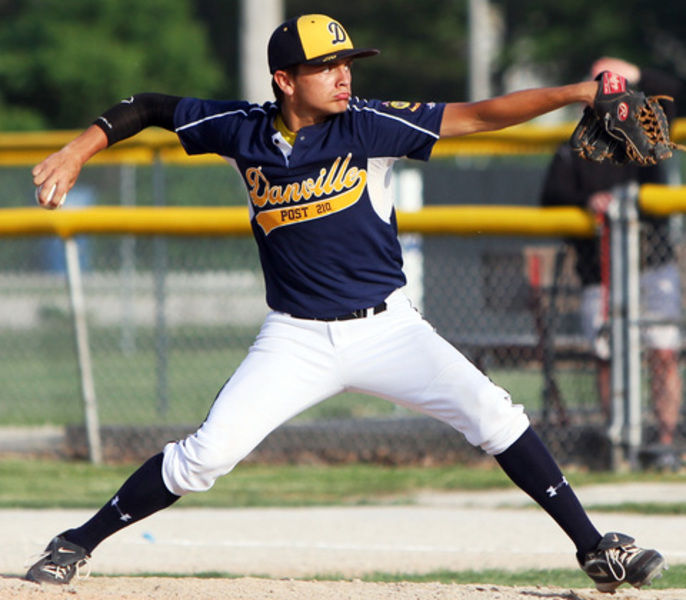 Post 210 shortstop Mark Strebin gets the out at second on Dustin Lard of Post 287 during a double play attempt in the first inning Friday at Larry G. Phillips Memorial Field in Tilton.

TILTON — The Danville Post 210 Speakers have only played 12 innings of baseball so far this season but manager Allan Shepherd says that things are already clicking for his club. The Speakers took down Rantoul Post 287 in seven innings on Friday night at Tilton’s Carl Gruber Sports Complex, 11-1.

“For only playing 12 innings so far, this team is already playing together,” Shepherd said. “It usually takes my teams until July before we really start gelling but they’re picking each other up and executing. “

It took one trip through the order on Friday night for Danville to get the bats going but once they finally jumped on Rantoul starting pitcher Kolton Vermillion, the runs came in bunches.

The Speakers scored used a two-RBI double from Austin Calhoun to lead the charge in the four-run third inning. They followed that inning up with a five-run outing in the fourth highlighted by an Aidan Berg double, taking a commanding 10-1 lead after four innings.

Austin West was a large part of the Speaker offense during those two innings. The Danville High School product had a hit and scored a run in each inning while also driving in a run in the third. He finished the day driving in the game-clinching run in the sixth on an RBI double.

West says that Shepherd was persistent about a game plan for attacking Vermillion and the Rantoul pitching staff.

“Our coach was telling us to be disciplined at the plate to make sure we worked his pitch-count up to where he would get into his own head.”

Westville product Dillon Turner was another difference-maker for the Speakers. He threw all seven innings for Danville. Turner, who walked the first batter in the game, didn’t walk another batter until the seventh inning. He finished the day allowing just the one run on five hits, striking out six, and walking two.

“He wasn’t worried about striking everybody out and blowing everybody away,” said Shepherd. “He trusted his defense behind him and threw a phenomenal game.”

Danville knew they were going to get Rantoul’s best on the mound Friday night in Vermillion. The recent graduate of Rantoul Township High School and former Armstrong-Potomac standout is headed to Heartland Community College in the fall on a full scholarship to pitch for the Hawks.

“We got Vermilion, which is what we wanted. Part of playing for Danville is that you get everybody’s best (pitcher),” said Shepherd. “We wanted him, we hit well and we executed.”

Six different Danville players recorded multiple hits on the day. West was the leading hitter, finishing 3-for-4 at the plate driving in two runs and scoring two of his own. Calhoun was 2 for 4 and scored three runs while driving in two more.

The Speakers will look to continue the hot streak today when they play a doubleheader at Mattoon beginning at 10 a.m.