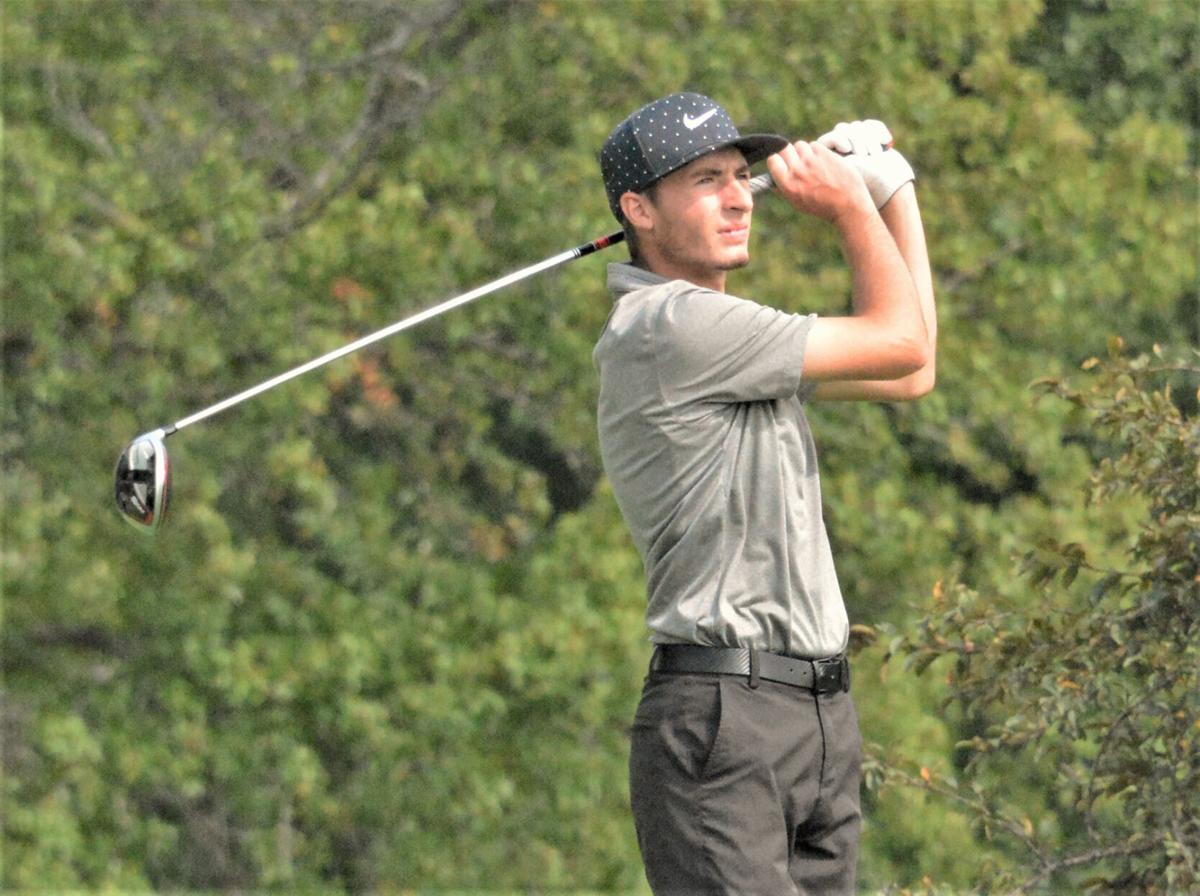 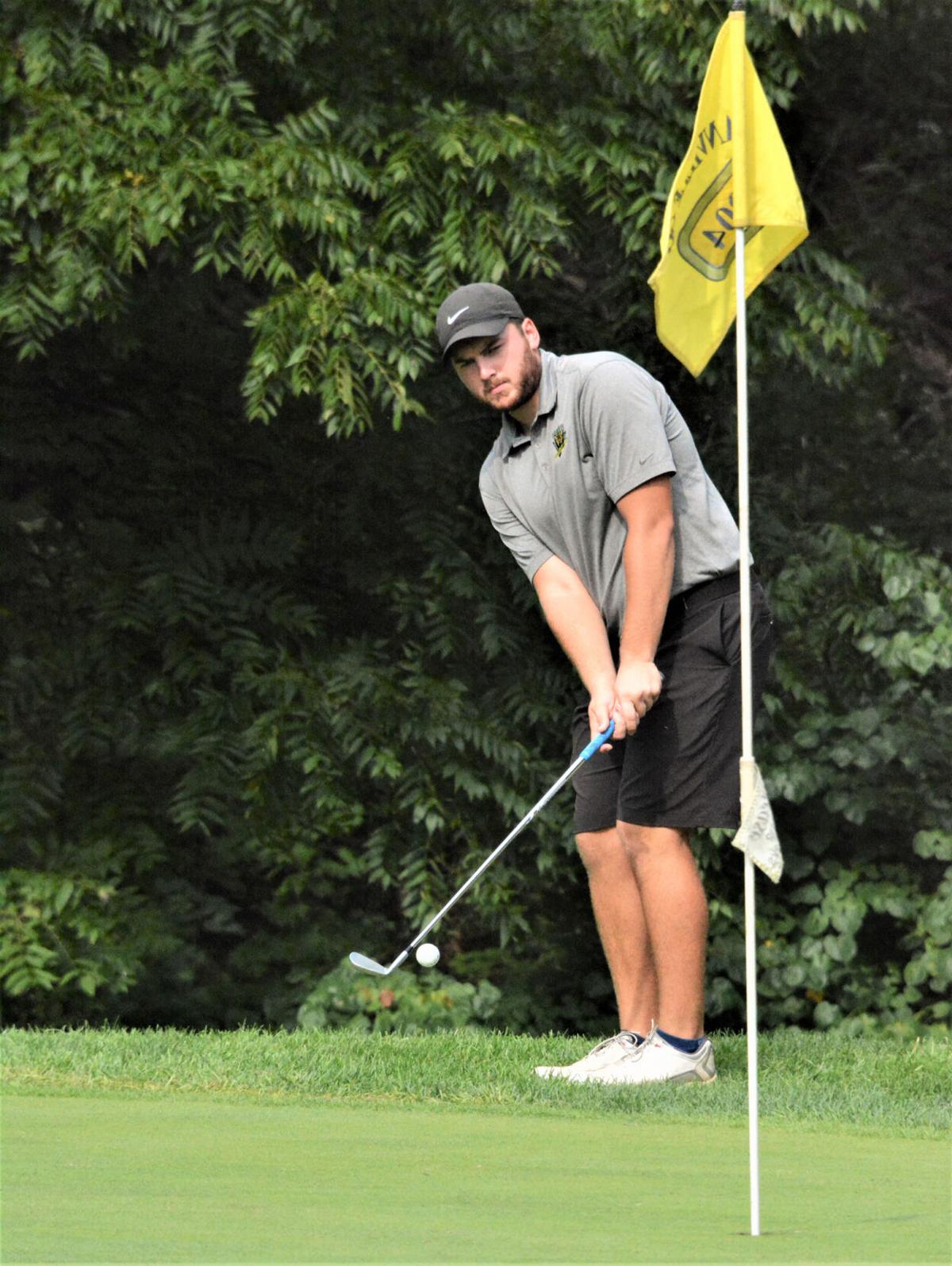 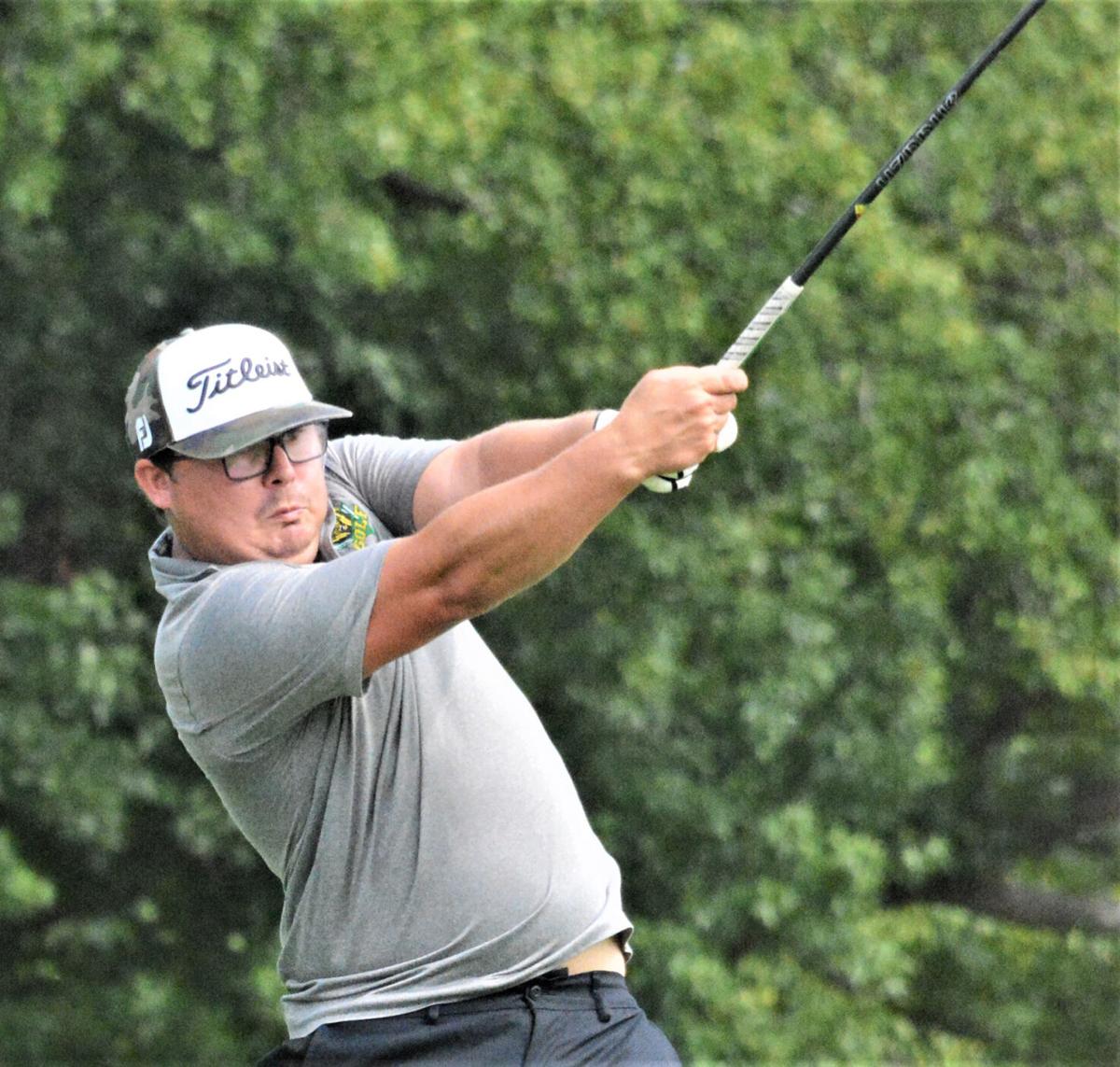 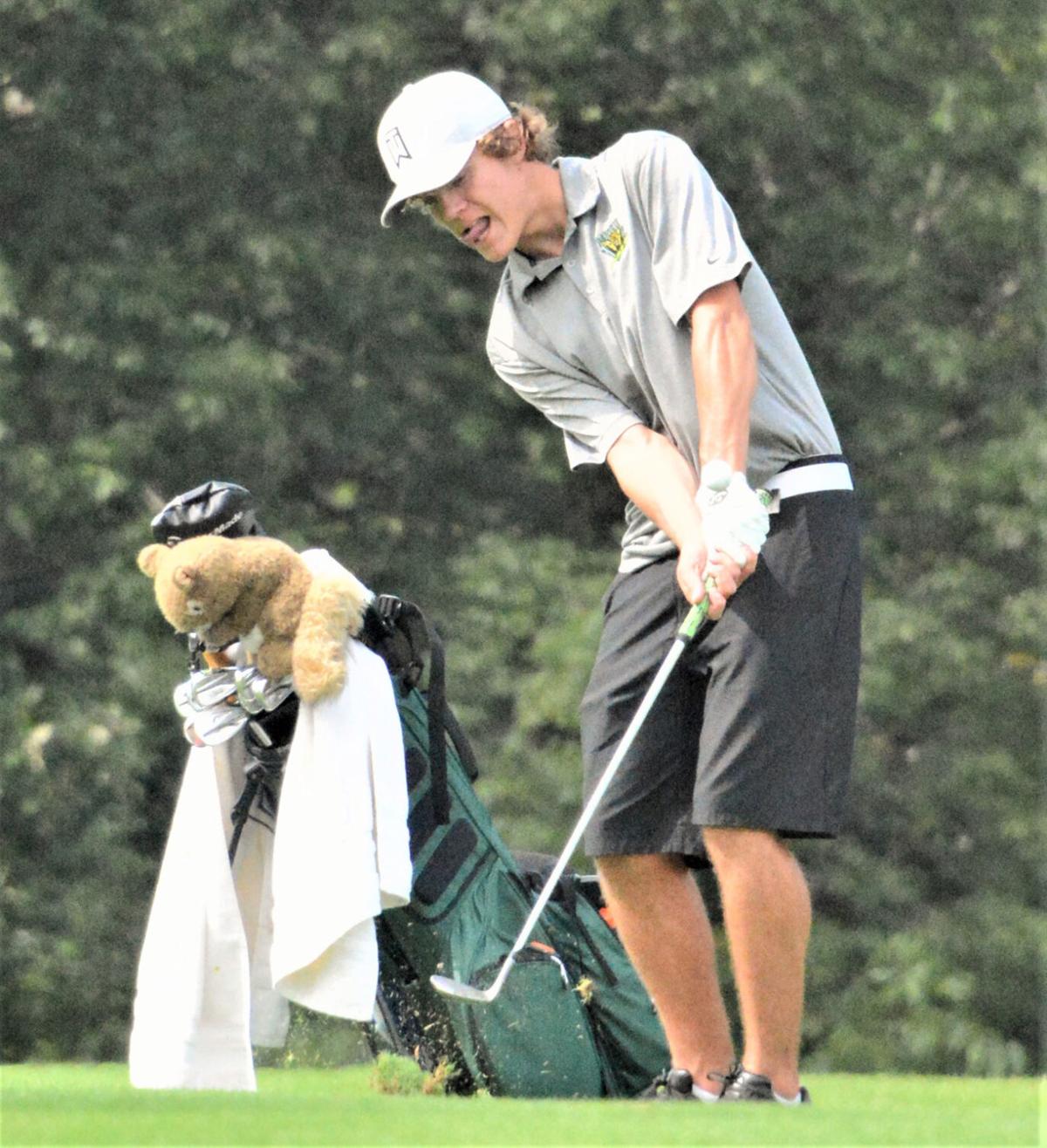 DACC freshman Lukas Ball hits a wedge shot into the ninth hole on Wednesday during the Danville Invitational at Danville Country Club. 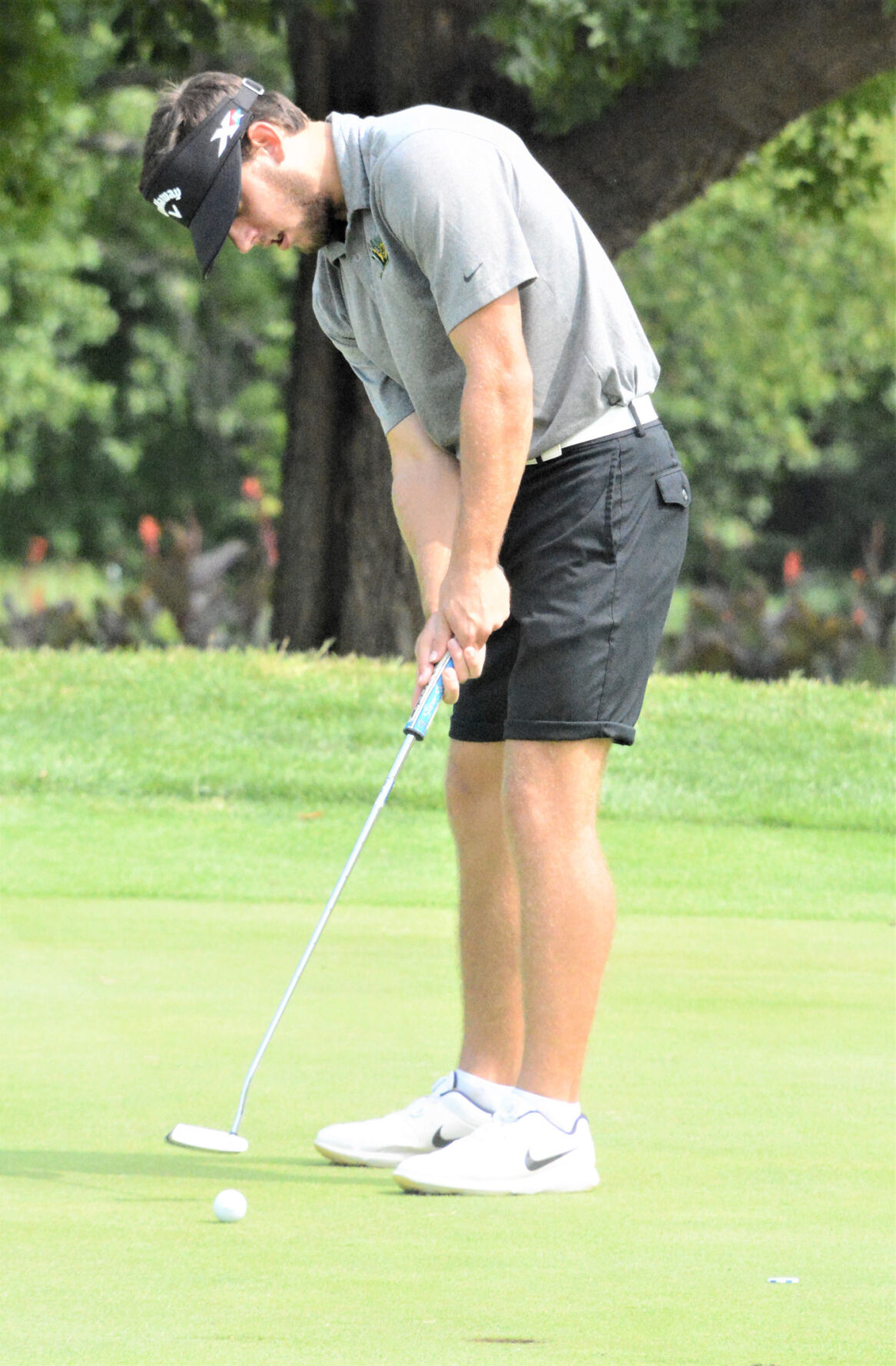 DACC sophomore Rylan Wolfe hits a putt on the ninth green during Wednesday’s Danville Invitational at the Danville Country Club.

DACC freshman Lukas Ball hits a wedge shot into the ninth hole on Wednesday during the Danville Invitational at Danville Country Club.

DACC sophomore Rylan Wolfe hits a putt on the ninth green during Wednesday’s Danville Invitational at the Danville Country Club.

DANVILLE — There’s an old adage in golf that states “you drive for show and putt for dough.’’

The Danville Area Community College men’s golf team learned the meaning of this statement the hard way on Wednesday afternoon in the Danville Invitational at the Danville Country Club.

The Jaguars finished two shots behind the Lincoln Trail Statesmen (613-615) for the title in the four-team event, with Vincennes (637) taking third and St. Mary of the Woods (638) placing fourth.

“We didn’t finish it off,’’ said DACC coach Terry French, whose team trailed by 10 shots (305-315) after Wednesday’s first-round. “We just need more work on our wedge game and our putting game. It’s the same thing that I’ve preached about during my entire coaching career. That’s where the game is at.

“We had too many 3-putts and this is our home course. We shouldn’t be doing that. We should know where all the breaks are at and everything associated with these greens.’’

French acknowledged that playing the first home event since the program was restarted a year ago isn’t always easy.

“It’s actually harder in your home event, because everyone expects you to play well,’’ he said. “We’re disappointed, but I’m still proud of my guys. For a beginning program, we are doing very well.’’

But, it wasn’t just the coach that was upset with Wednesday’s results.

Sophomore Logan Richardson, who earned an individual second-place finish with a two-round score of 150, echoed his coach’s statements.

“There is so much that we left out there as a team,’’ Richardson said. “I know that I can do better than that, and I know that my teammates can do better. We all know that, but you can’t change what has already happened.’’

It was a double-edged sword for Richardson, the former standout at Tri-County.

He left the course on Wednesday not only thinking about what could have been for his team, but Richardson’s rounds of 77 in the morning and 73 in the afternoon were filled with opportunities for a lower score.

“I probably have never driven the ball better than I did today and my iron game was solid,’’ he said. “I hit most of the fairways and most of the greens today. But when I didn’t hit the green, that’s when it really got me.

“In the second round, everything was there but I missed so many putts that were within 10-15 feet. You have to make those if you want to win a tournament like this.’’

And just how good can this DACC team play at the Danville Country Club.

“Less than a week ago for the Gary Estes Scholarship tournament, we shot 299 as a team if you add up those scores,’’ said French, noting that Richardson won that honor with a two-round score of 147. “We will get back to work and take care of those things.’’

Next up for the DACC men’s golf team is the Illinois Valley Fall Invitational on Sept. 21 and 22.

“I think we can be tough to beat,’’ Richardson said. “Today, we just played average golf. If we play up to our abilities, we are capable of breaking par.’’

French was pleased with the school’s first-ever tournament at the Danville Country Club.

“We heard nothing but great things about this course,’’ said French passing all of the credit to the Danville Country Club staff including golf director Neil Moore and course superintendent Paul Sermersheim. “They do a fantastic job with this course.’’

French is hoping in a post-pandemic season that the Danville Invitational can attract at least twice as many teams as the four that played on Wednesday.