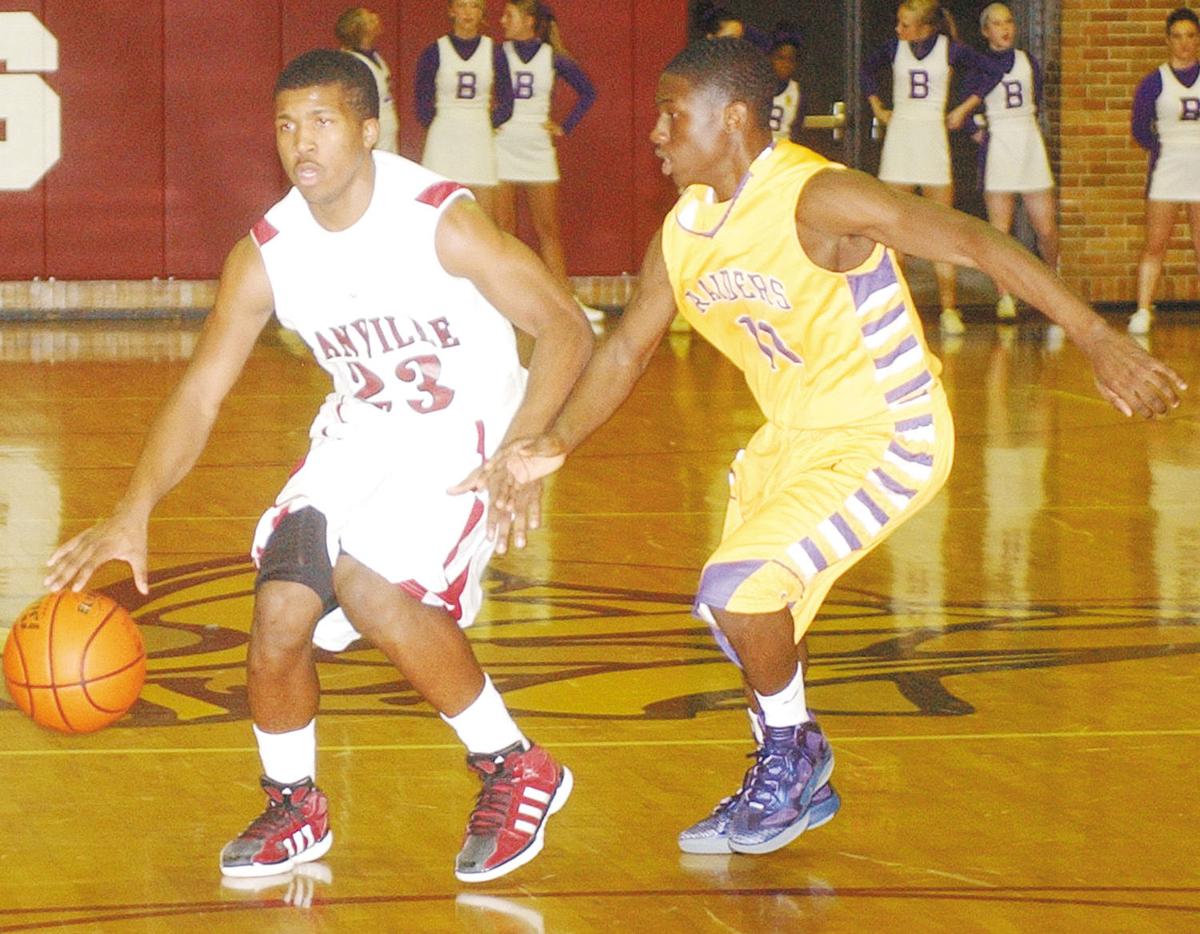 Danville's Dennis Hightower drives the ball on the court followed by Bloomington's Antonio Sims during Danville's 76-71 win at home. Hightower had 24 points to lead the Vikings. 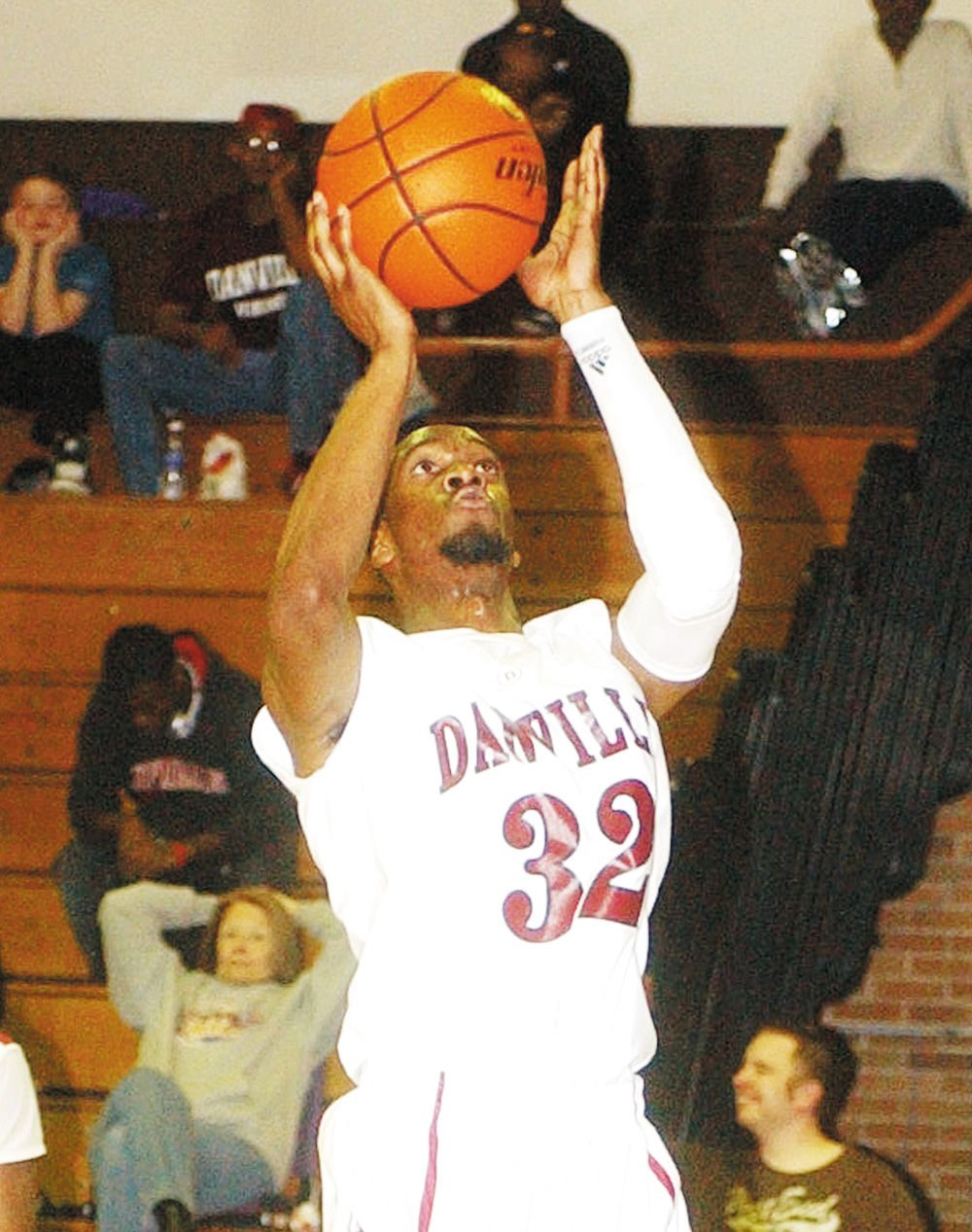 Danville's Jaron Cunningham aims for the basket during the game. Cunningham had 21 points

Danville's Dennis Hightower drives the ball on the court followed by Bloomington's Antonio Sims during Danville's 76-71 win at home. Hightower had 24 points to lead the Vikings.

Danville's Jaron Cunningham aims for the basket during the game. Cunningham had 21 points

The final regular season home game for seniors Dennis Hightower and Jaron Cunningham was a memorable one as the Danville Vikings jumped out to a big early lead and finally took control in the final minutes in a 76-71 win over the Bloomington Purple Raiders.

Hightower led the Vikings with a game-high 24 points and Cunningham added 21 points.

The win moves Danville to 7-18 overall and 6-6 in the Big 12 Conference and gives the Vikings a chance to end the season with a winning conference record and some momentum heading into the postseason.

“We still lack a signature win, but the way we have struggled at times this season, any win is a good win,” said Danville coach Gary Tidwell. “Bloomington has played a brutal schedule and is certainly much better than their record (2-23) would indicate. We have been playing better as of late and you always want to being playing your best at the end of the year and even more so when you’re hosting the regional.”

Hightower hit a 3-pointer to start the game as the Vikings jumped out to a quick 17-6 lead. Bloomington would close the margin to 17-12, but the Vikings were able to bounce back and ended the first period up 26-17.

The Vikings would be held scoreless for the first four minutes of the second quarter allowing the Purple Raiders to take a 27-26 lead.

A break away dunk by Cunningham would turn the momentum back to Danville.

“We were a little stagnant in the second quarter with Dennis slowed by foul trouble,” Tidwell said. “Anytime you can make a highlight reel play like Jaron did it energizes your team and the crowd and it did give us some energy. Jaron has had several plays like that for us over the last four years and I was happy for him to have a big moment like that on senior night.”

Cunningham would finish the first half with 10 points as the Vikings took a 35-29 lead into half-time.

Bloomington would start the second half on an 8-0 run to take a 37-35 lead, but sparked by Hightower and Trent Sherfield, the Vikings once again bounced back and ended the period with a 50-47 lead. Sherfield would finish with eight points.

“Trent had some good moments for us and has been solid on defense all year,” Tidwell said. “Anything he can add on offense is a bonus given his defensive play and he did a nice job offensively tonight.”

Bloomington would tie the game for the final time at 59-59 with just under four minutes to go, but could get no closer than three points the rest of the way. Hightower would score 19 of his points in the second half and Cunningham 11.

“Dennis and Jaron have both had great high school careers,” Tidwell said. “They have both been solid all four years and have given us good numbers. We had a lot of good intensity early, but when Dennis went out we lost that.

“We are still an inexperienced team at a lot of positions and the young guys need to learn from a game like tonight that when you play hard on defense a lot of things will go well for you as a team.”

The Vikings wrap up the regular season next Friday at Champaign Central.

“We have a chance to get a nice win on the road and build some momentum for the regional,” Tidwell said. “It’s important for our guys to stay optimistic and build confidence on the court and we saw some good things tonight especially the way our perimeter guys got the ball inside to Jaron. I think that’s the best job they have done getting him the ball in the post all year. “