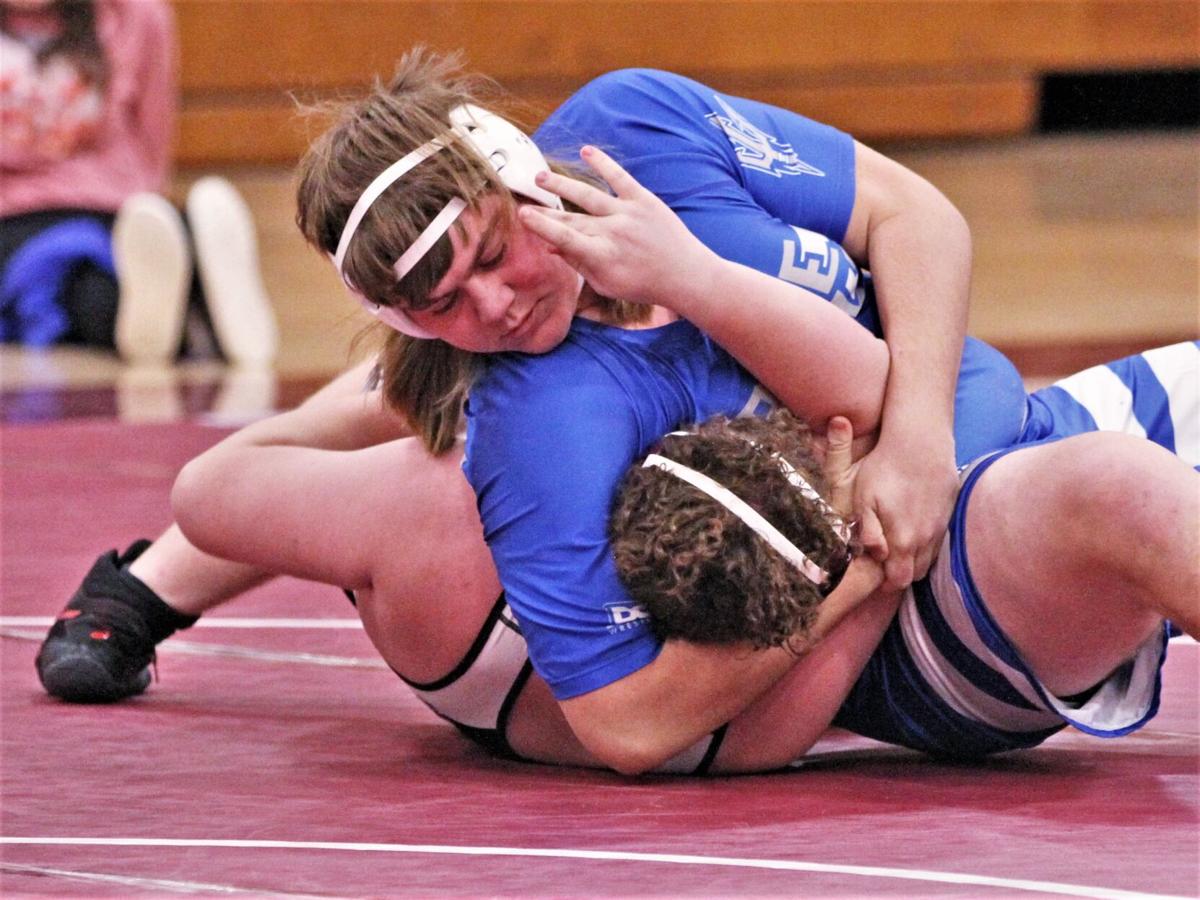 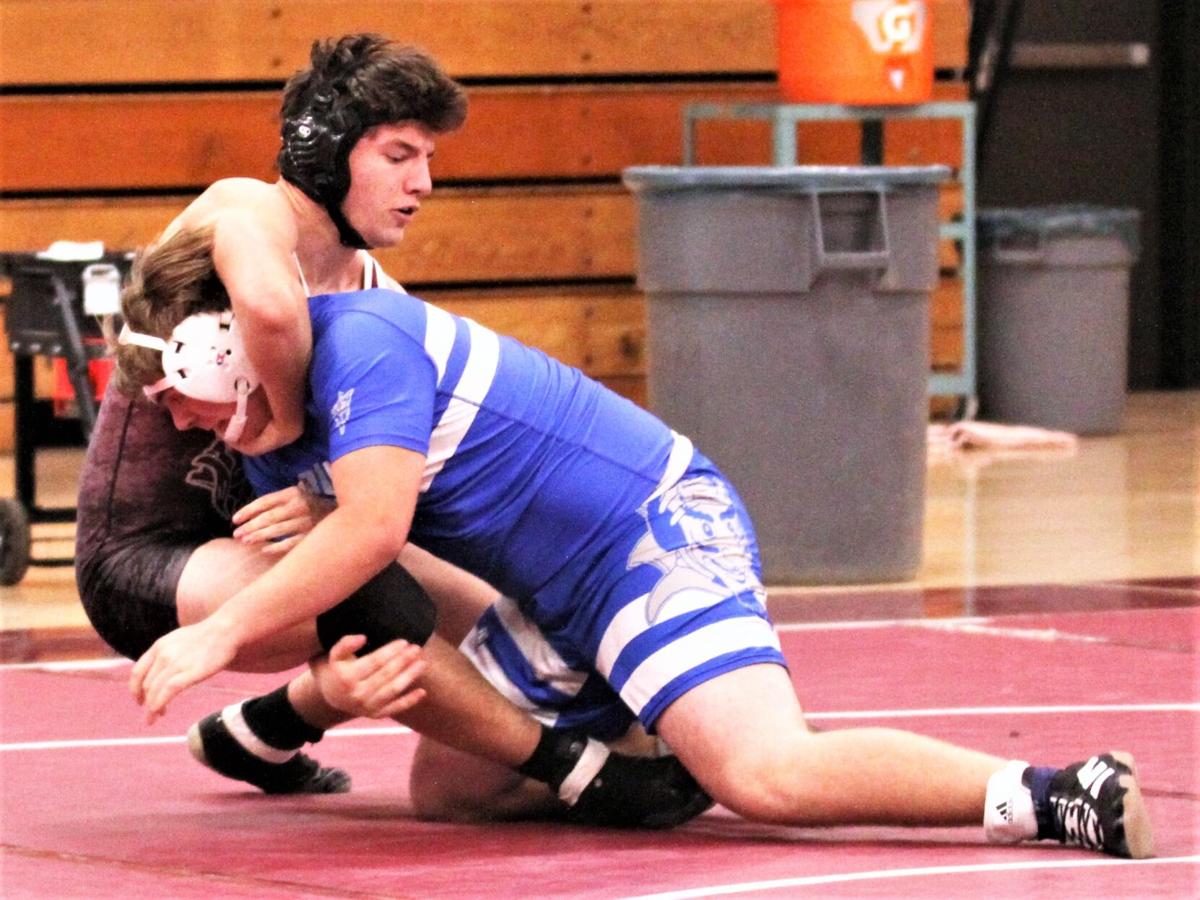 Danville junior Calvin Hempel defends against a takedown attempt by Bismarck-Henning/Rossville-Alvin/Armstrong-Potomac ‘s Nathanael Gnaden during the 220-pound match at Tuesday’s dual. Hempel defeated Gnaden with a pin in the third period. 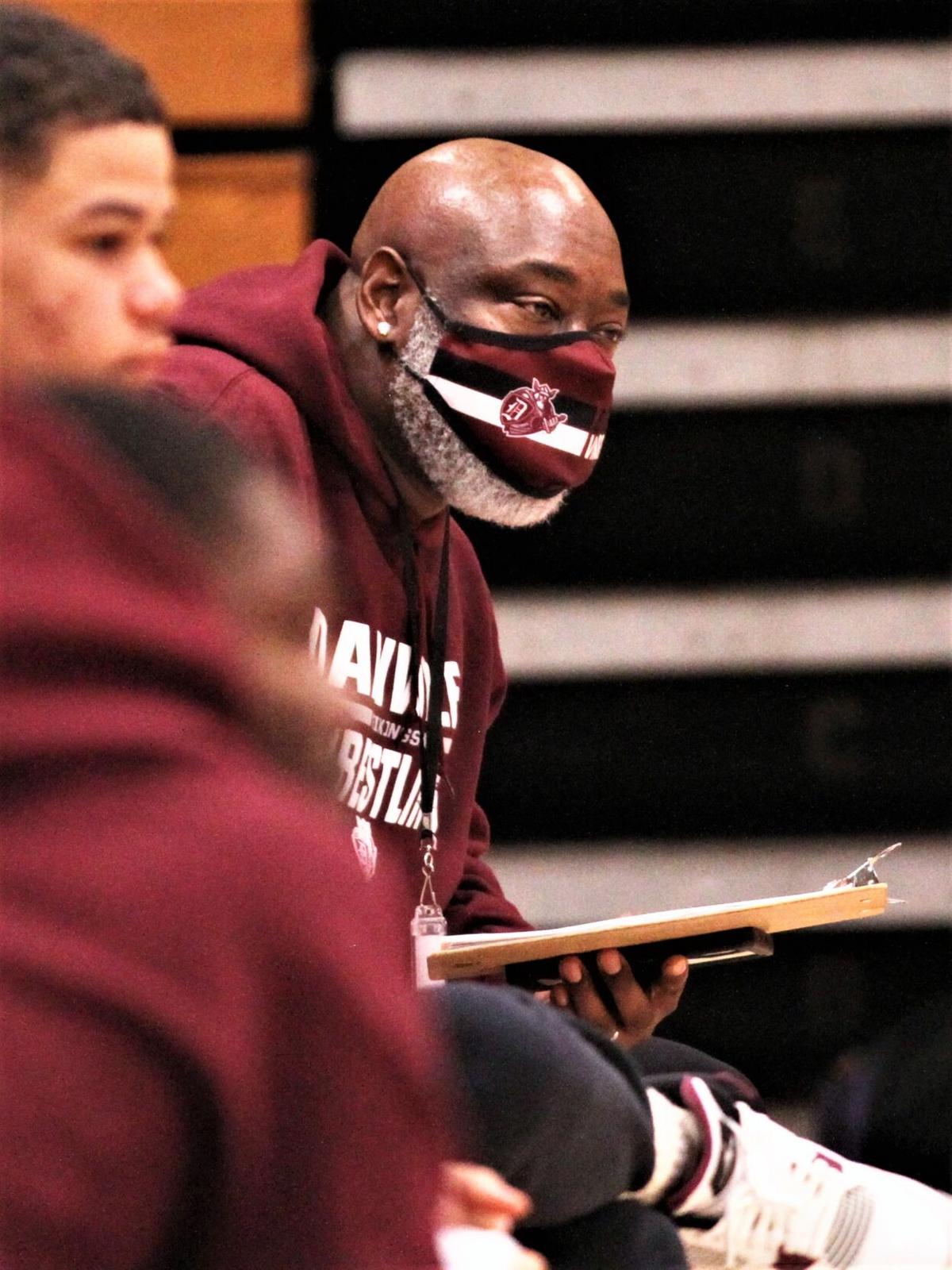 Danville first-year wrestling coach Marcus Forrest watches his team wrestle against Bismarck-Henning/Rossville-Alvin/Armstrong-Potomac on Tuesday night. It was the season opener for the Vikings under their new head coach.

Danville junior Calvin Hempel defends against a takedown attempt by Bismarck-Henning/Rossville-Alvin/Armstrong-Potomac ‘s Nathanael Gnaden during the 220-pound match at Tuesday’s dual. Hempel defeated Gnaden with a pin in the third period.

Danville first-year wrestling coach Marcus Forrest watches his team wrestle against Bismarck-Henning/Rossville-Alvin/Armstrong-Potomac on Tuesday night. It was the season opener for the Vikings under their new head coach.

DANVILLE — All sports were forced to deal with changes with the COVID-19 pandemic, but no sport had more issues last season than wrestling.

Bismarck-Henning/Rossville-Alvin/Armstrong-Potomac junior heavyweight Hunter Wilson was able to turn the abbreviated summer wrestling season as a jumpstart into this year.

Wilson improved to 9-0 this season with his 8th pin as the Blue Devils defeated the Danville Vikings 42-36 in a dual meet Tuesday night at Danville High.

“Hunter has really came out strong this season,’’ Bis-Henn/Ross-Al/AP coach Andy Head said. “He has a completely different mentality. He had a little bit of success at the end of last season. He started deep in our depth chart, but at the end of the year, he really caught fire and started winning some matches. He made a pretty deep run in the IWCA sectionals.

“He came into this season with that the same mentality from the first day. He is ready to win every match rather than just hoping he can be competitive.’’

Wilson was one of two Blue Devil wrestlers to pick up wins by pin on Tuesday. Logan Hughes, a sophomore, sealed the victory for BHRAAP (4-5) with his pin at 145 pounds.

“We came out a little flat, but we really wrestled better on the back end,’’ Head said. “We have put together a pretty good young team. We are mostly freshmen and sophomores, so I think we have a really bright future.’’

On the other side of the mat on Tuesday night, the Danville Vikings were making their season debut under first-year coach Marcus Forrest.

The Vikings football coach is beginning a new endeavor and he has brought a number of his football players into the program.

“Wrestling is different than football but also similar in a lot of ways,’’ Forrest said. “I talked with (former Danville standout) Justin March and he said that half the players that he ran into in the NFL had been high school wrestlers. It was good for me to understand how they correlate with each other, like some of the movements.

“As a school and as a program, I feel that we need to get better at competing. In football, you have 11 guys with everyone doing their job. In wrestling, it’s one-on-one with another person. You have to be able to think and figure it out on your own. You can’t blame someone else for not blocking, or running the right route.’’

While Danville didn’t win the dual, the Vikings actually won five of the seven matches that were contested on Tuesday night as the Blue Devils picked up five wins by forfeit.

“If we can get more of those weights filled in, we can be a more competitive team,’’ Forrest said.

That’s would be a welcomed change for Danville junior Calvin Hempel. The 220-pounder was one of five wrestlers for Vikings to pick up a win by pin in their season-opening match.

“We were a little rusty and for our new kids, your first experience isn’t always going to be pretty,’’ Hempel said. “We all fought and did what we could do, but we just came out on the wrong side of the scoreboard.

”Having a lot of new kids this year is exciting and for those of us returning, we’re looking forward to the team aspect of competition.’’

Hempel, who is a two-way starter on the football team, appreciates having Coach Forrest leading the wrestling program.

”There is always going to a hole on our team without coach (Terrance) Tetter,’’ said Hempel as coach Tetter passed away a year ago. “Coach Forrest isn’t the most experienced wrestling coach, but he helps a lot with the athletic side and with life advice.

”It helps that we have coach Cruz (Perez) for wrestling help.’’

These obituaries were received by 5 p.m. Thursday: