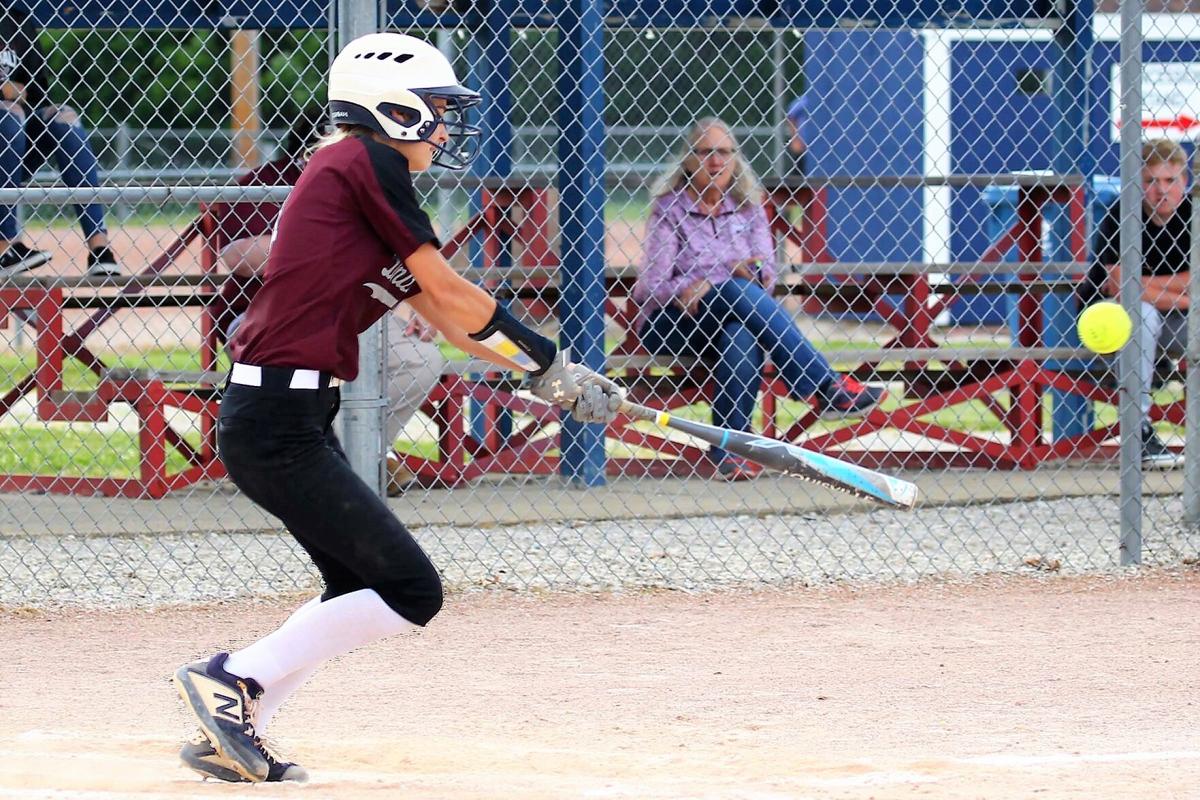 Allie Thurston of Danville had four RBIs on the day during an IHSA Class 3A regional semifinal on Wednesday. Rantoul defeated Danville 7-6. 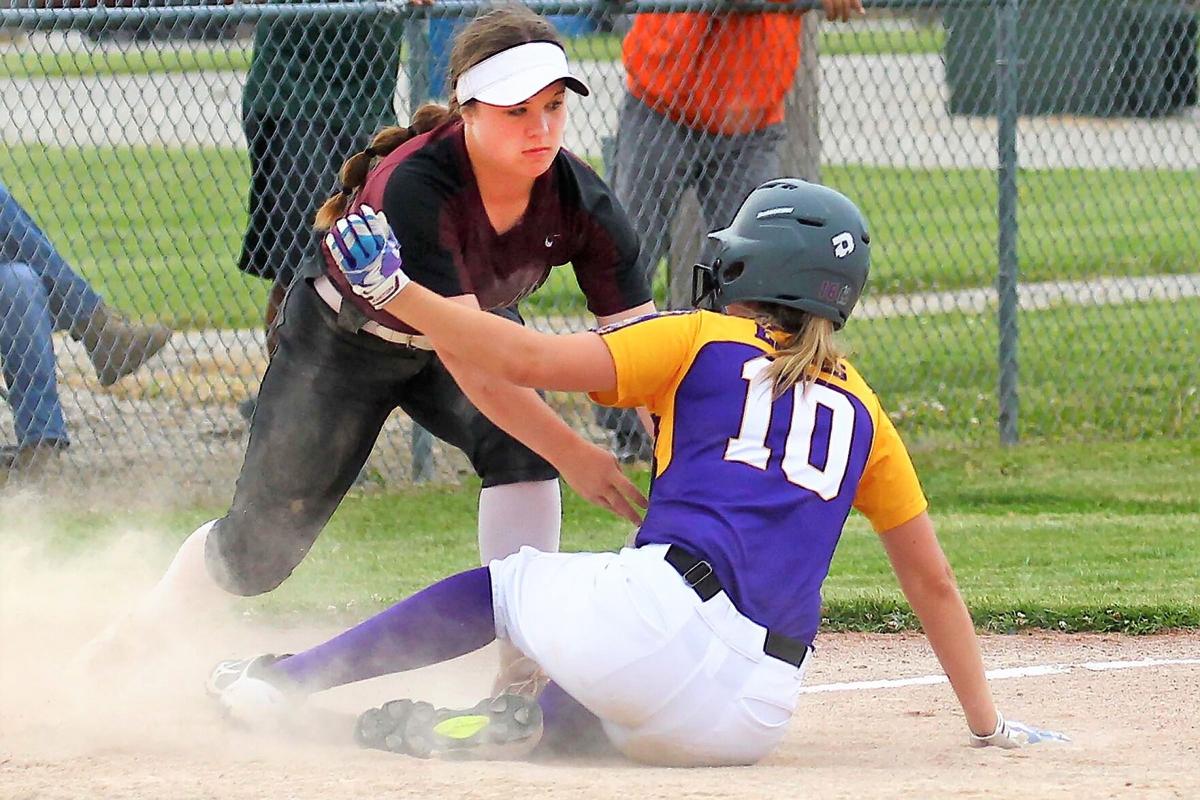 Eve Jessup of Danville tags out Madison Palmer of Rantoul at third base to end the fifth inning. 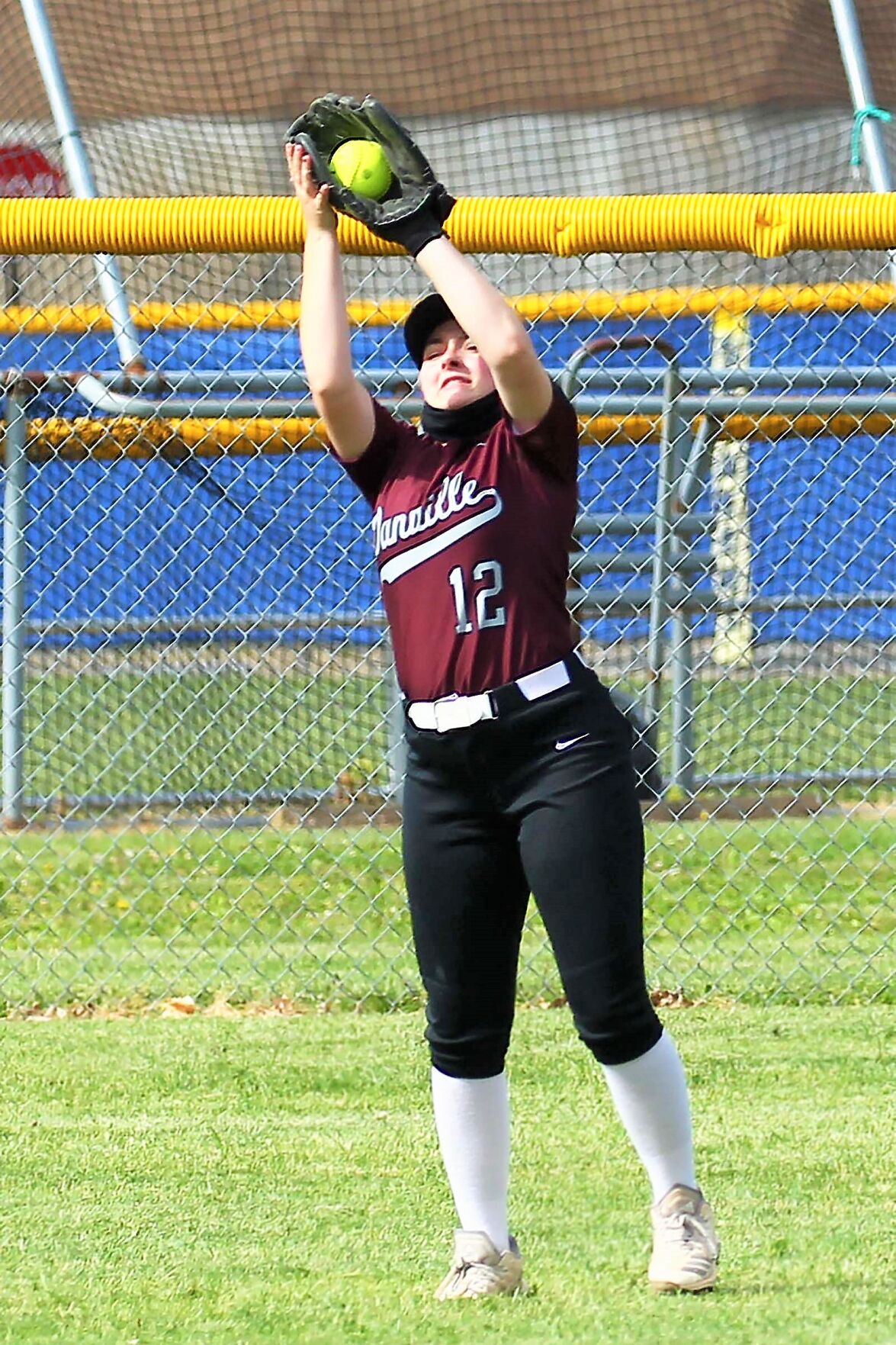 Ciera Beith of Danville makes one of several catches in centerfield.

Allie Thurston of Danville had four RBIs on the day during an IHSA Class 3A regional semifinal on Wednesday. Rantoul defeated Danville 7-6.

Eve Jessup of Danville tags out Madison Palmer of Rantoul at third base to end the fifth inning.

Ciera Beith of Danville makes one of several catches in centerfield.

TILTON – The Danville softball team saw its season come to an end when the Vikings fell to Rantoul in a Class 3A Regional semifinal.

The teams traded the lead throughout the game, but in the end the Eagles came out on top 7-6 on a seventh inning solo home run.

Both teams got on the scoreboard early as each notched a run in the first inning.

Batting first, Rantoul used a double by Kianna Berlatsky and a single by Madison Palmer to push a run across.

Danville answered in their half as Savanna Rudy led off with a walk, reached third on two passed balls and scored on a single by Allie Thurston that made it 1-1.

The Eagles threatened in the second, getting runners on first and second, but Vikings pitcher Saige Keller got the third out when the next batter lined out to Cierra Beith, the centerfielder.

Beith and Danville shortstop Karli Johnson seemed to be the focal points of the Rantoul offense as both players repeatedly had to make difficult plays at their positions.

Pitchers dominated in the next two-and-a-half innings as both teams only managed to put one runner aboard combined and she never moved past first base.

Things changed in the fifth inning as the game came alive for both squads.

In the top of the inning, the Eagles opened with two looping singles that dropped just in front of diving Viking outfielders.

A passed ball and a sacrifice fly followed that gave Rantoul a run with the next batter grounding to first baseman Emmalee Trover for the second out but also the second score of the inning.

The ensuing batter hit a short fly ball to center for a single that Beith dove for, but could not quite reach, but after another single, the Eagles became too aggressive and had a runner tagged out trying to steal third to end the inning at 3-1.

“We told them a couple of weeks ago to go for a ball and get it,” Corey Pullin, the Danville head coach said about the Beith dive. “Getting aggressive on those kinds of plays has won some games and kept us in others recently.”

Danville took the lead back in the bottom of the fifth as a walk to Rudy, a single by Keller and Johnson being hit by a pitch loaded the bases.

Thurston doubled in all three baserunners to put the Vikings up 4-3, but the next two batters were outs to end the inning.

Aggressiveness paid off for Rantoul as well as, after a single and a walk, Berlatsky lined a ball into center that allowed the two baserunners to score and eventually Berlatsky as well as Danville’s throws were just a little late trying to cut down each runner.

That made the score 6-4 in favor of the visitors going into the bottom of the sixth, but again Danville responded to adversity.

Using an error that got a baserunner aboard, Rudy followed up with a walk and Keller doubled to right field that sent the two Vikings across the plate to tie the contest at 6-6 going into the seventh.

Rantoul pitcher Emily Curtis led off for the Eagles and she smashed a ball just to the left of the scoreboard and well beyond the centerfield fence to put her team up 7-6.

The next three batters all popped up so Danville came to bat in the bottom of seventh trailing by a run.

Thurston walked to open the frame, but after a strikeout, she was caught trying to steal second.

Beith followed with a double to center, but, with two outs, the next batter lined out to the Eagle right fielder to end the game with the Vikings still a run shy.

“It was a good game both ways,” Pullin said. “We took the lead and so did they. We battled back and that’s all you can ask. We hit balls at them and theirs just missed us.”

Pullin singled out his three seniors (Rudy, Mayce Osborn and Ariana Appleman) for their leadership and also the work they did for the team off the field such as being in charge of the phone chain.

He also pointed out what he said was more important, namely that all three girls are academically solid and members of the National Honor Society.

With the loss, Danville ends the season with a record of 7-9.