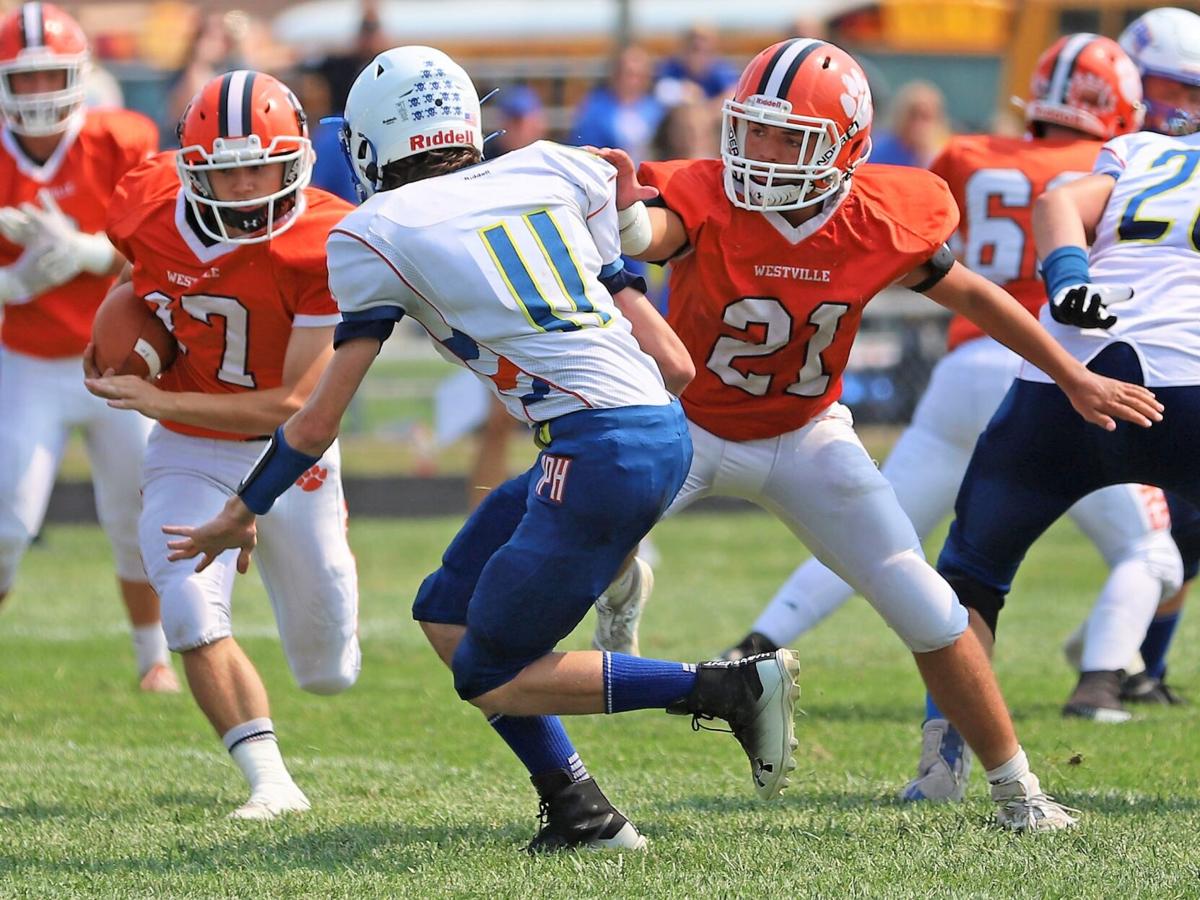 Westville running back Houston Bryant runs the ball while line backer Will Terry moves in to protect him from Oblong/Hutsonville/Palestine defensive back Johnathan McPherson during an early season game in Catlin. The Tigers will host Salt Fork on Saturday, this time at the newly-renovated Memorial Stadium. 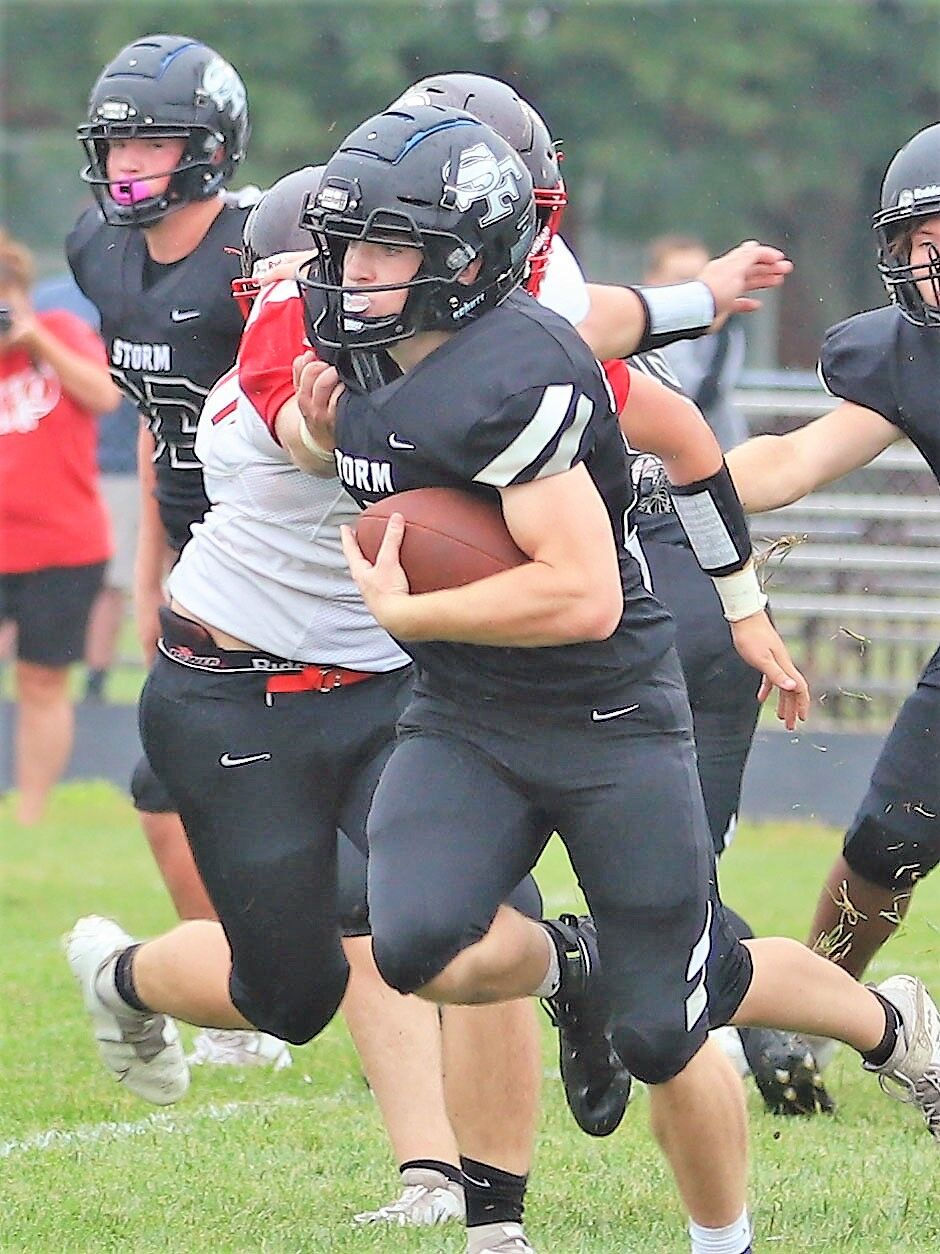 Salt Fork junior running back Ben Jessup runs the ball during the first half of an early-season game against the Momence Redskins Saturday in Catlin.

Westville running back Houston Bryant runs the ball while line backer Will Terry moves in to protect him from Oblong/Hutsonville/Palestine defensive back Johnathan McPherson during an early season game in Catlin. The Tigers will host Salt Fork on Saturday, this time at the newly-renovated Memorial Stadium.

Salt Fork junior running back Ben Jessup runs the ball during the first half of an early-season game against the Momence Redskins Saturday in Catlin.

WESTVILLE — While IHSA playoffs start later this month, it is never too early for a preview.

Salt Fork and Westville will play today at 1 p.m. at the newly renovated Memorial Stadium in a game between two of the top teams in the Vermilion Valley Conference South Division.

“You have both teams with one loss and I think it will be another well-attended game with an exciting atmosphere,” Westville coach Guy Goodlove said. “It is a great place to watch a game and it will be the type of atmosphere if you make the playoffs. That is what we expect: Great crowds and a great game.”

The Tigers are coming off the opening game at the renovated stadium, a 16-14 win over Oakwood.

“It was everything that we imagined opening night to be,” Goodlove said. “It was a night that you will always remember and the great thing about it was that we got the W against a very good Oakwood team. It just all came together that night and it is something that the kids will remember forever. It was an exciting game for the fans. All the momentum and buildup for the game all came through.”

For the Storm, they are coming off a wild 54-41 loss to VVC South leader Bismarck-Henning/Rossville-Alvin.

“It was a very exciting game,” Salt Fork coach Joe Hageman said. “I thought in the first half we won the turnover battle, we caused a fumble and had an interception and got out to an early lead. In the second half, they recovered three onside kicks and that won them the turnover battle. It was an exciting game and it made the difference on the scoreboard.”

Hageman said that how the team responds to the defeat will go a long way in today’s game.

It’s going to be interesting, I am real curious to see how the kids respond to that loss,” Hageman said. “We had a good week a practice and we talk about not worrying about opponents and worry about getting better. If you look at our schedule, we talked about the South being very competitive and we have three games in a row with good teams and Westville is next on the list and we are going to have to be ready because it will be a back and forth game and a turnover here or someone taking an opportunity here will win the game.”

Goodlove said that the Storm’s speed will be a problem with running backs Ben Jessup, Ethan McClain and Ethan Davis.

“They are very, very fast and any time they touch the ball — whether it is Jessup or McClain or Davis — they have the ability to score from anywhere on the football field and we will have our hands full,” Goodlove said. “We will have to keep them in front of us and inside of us and if we don’t it will be along night for us. It can’t be one guy making the tackle, we are going to have to gang tackle them all night long. They are so difficult to get a solid hit in and so difficult to tackle.”

How Goodlove wants to combat that is to not give that group much time at all on the field and it starts with his offensive line.

“I like to build my teams about the offensive line. Most of my kids have been starting since they were freshmen and a few of them are seniors,” Goodlove said. “We like to call it the heart of the team and if the heart is beating properly then we will have success running the football. We work heard on it, have a lot of pride in it and we like to think that our line makes us go and as long as we have the ball, that means the other team can’t get on the field.

“Westville has a lot of good size up front and they do a good job of executing their scheme,” Hageman said. “They will try to control the line of scrimmage and run the ball. We watched them against Oakwood and they were very good at that.”

With second place in the division on the line with three weeks left in the regular season, the chance to have a playoff-type game at this point is appealing to both teams.

“I am sure they want to rebound from the Bismarck game and when we face Salt Fork, they always play well against us,” Goodlove said. “Whether they won or lost doesn’t matter, they are going to play good football and we have to make sure we match their energy and effort and take care of the ball themselves.

“We have the Saturday game, the 1 p.m. start at their new facility and we are going to play a team that is a borderline 2-3A team that is going to the playoffs, Hageman said. “So I think it is a real challenge for our kids to respond to the situation and to play a really good team back to back. It has a playoff feel to it.”

Summary — The Blue Devils has scored at least 35 points a game, while the Buffaloes has scored a total of 20 points for the season.