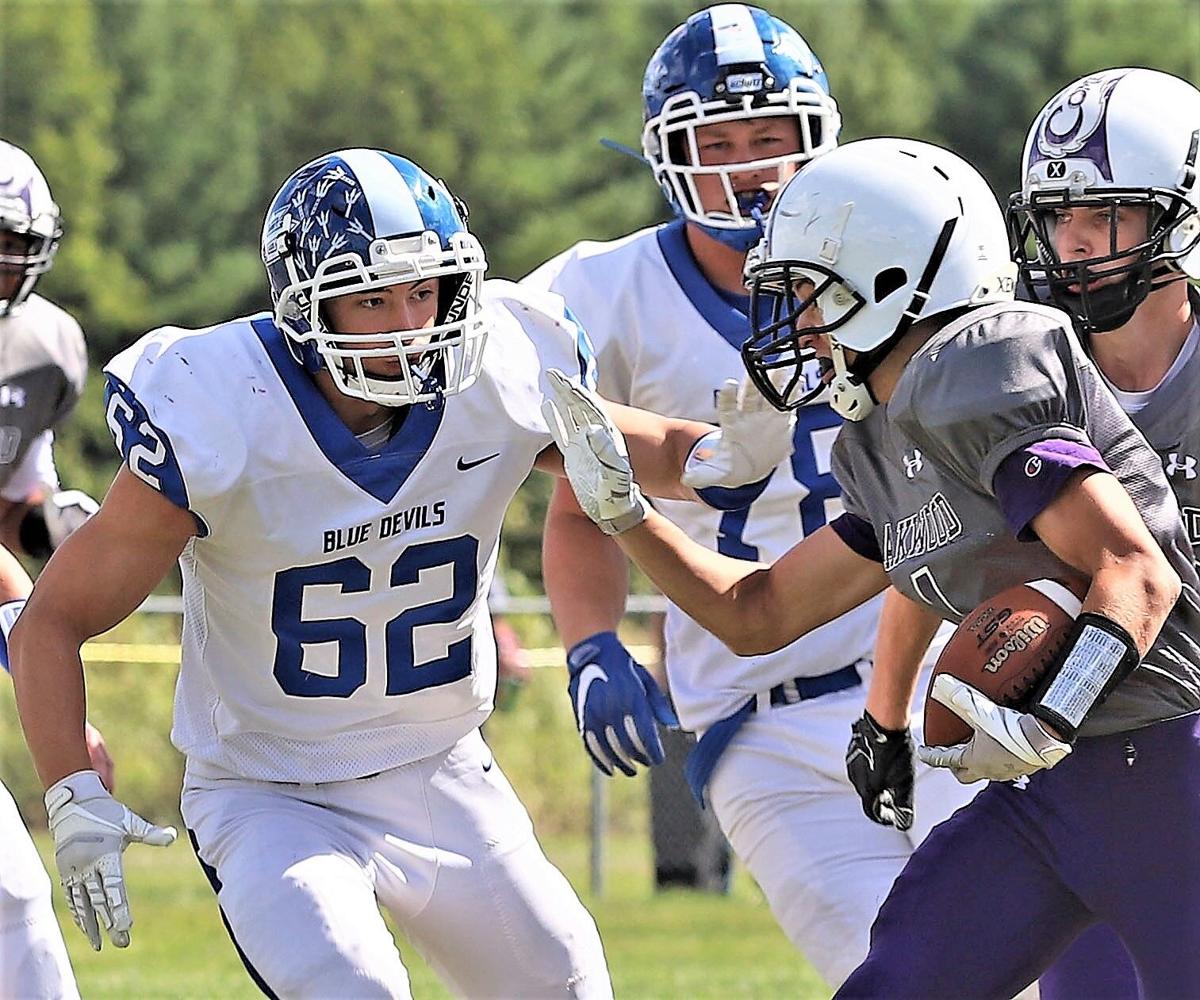 Oakwood running back Gaven Clouse reaches out to defend himself from Bismarck-Henning Rossville-Alvin linebacker Tucker Schultz during the first half of their Vermilion Valley Conference game in Oakwood earlier this season. The Blue Devils will face Westville on Friday. 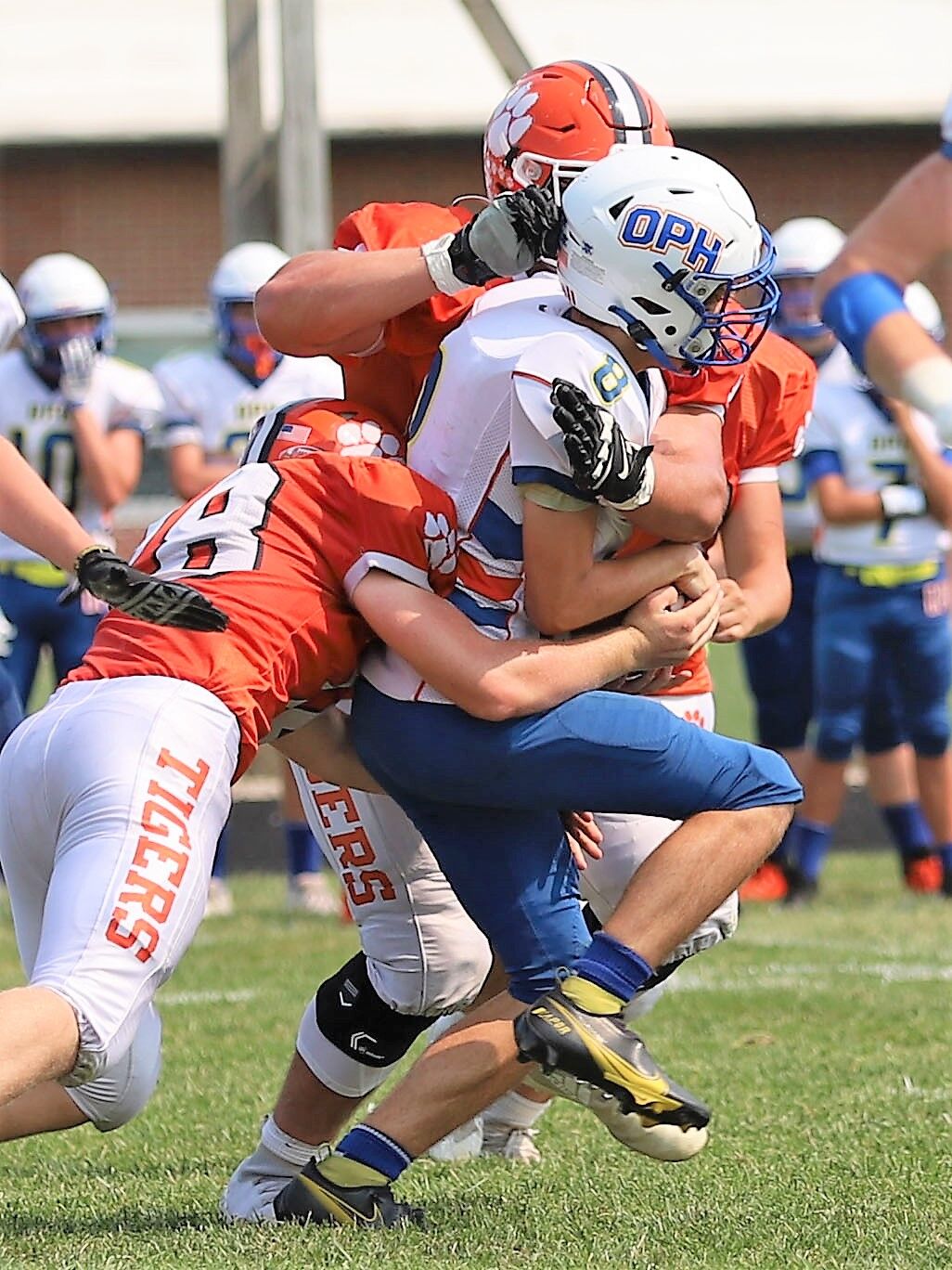 Oakwood running back Gaven Clouse reaches out to defend himself from Bismarck-Henning Rossville-Alvin linebacker Tucker Schultz during the first half of their Vermilion Valley Conference game in Oakwood earlier this season. The Blue Devils will face Westville on Friday.

WESTVILLE — While rivalries with teams can go for a very long time, a rivalry with a certain class can only go so far.

The senior classes for Bismarck-Henning/Rossville-Alvin and Westville football teams have seen a lot of each other with them first starting as kids in youth football.

“This group that I have and the group of seniors that they have had had a long standing rivalry,” BHRA coach Mark Dodd said. “In eighth grade, they played in the Youth League Super Bowl and they played each other in the freshman game and it was the most hard-hitting and intense freshman games I have ever seen and I think that is how it has built. There are two great senior classes trying to see who the top dog is.”

“It doesn’t seem that long ago, sitting on the sideline seeing youth varsity football and seeing them go at it,” Westville coach Guy Goodlove said. “It was competitive back then and we hope it will be on Friday, These two classes know each other very well. Watching them in youth football, you knew this would happen because they were two of the better classes. It is going to make for an exciting game.”

In Friday’s game between the Blue Devils and Tigers, there will be more than class pride at stake, there will be the Vermilion Valley Conference South title at stake as well. But Goodlove added another stake that is major.

“We are not only playing the best team in the area in Bismarck, and not only playing for the VVC championship. We are playing for an opportunity at maybe having our first playoff game at home and that’s important,” Goodlove said. “I said to them ‘If we don’t win this game, you may not get the opportunity to play at the new field.’ It is not just against the best team and the No. 5 team in the state, it is for the conference title and to host the first game.”

“Once we got back in to the VVC south, we get into our normal rivalries to win the VVC South and we had a great game with Salt Fork a couple of weeks ago and I expect the same kind of intensity for this game,” Dodd said. “The kids know each other and they compete against each other and we have a lot of respect for what they do and of course coach Goodlove has won a lot of games doing things his way and it has always been a fun rivalry and a good game late in the season for two good teams.”

BHRA is 7-0 and 5-0 in the VVC and is coming off a 58-12 win over Georgetown-Ridge Farm/Chrisman. Dodd commended the Buffaloes on their fight during the game and season.

“They are in a unique situation, but I will give them credit,” Dodd said. “They show up every Friday and they play and they compete and it fills up our schedule. It would have been easier to bow out, cancel the season and play JV, and leave us all in a loop, but they haven’t done that. I commend them for it and I think they are getting respect for what they are doing.”

“I thought we played our best football of the season, especially defensively,” Goodlove said. “Salt fork’s speed is great with Jessup and McClain and for us to be able to contain those two was great. Salt fork is well-coached but coming out of the Bismarck game, they were banged up and were without their starting lineman and fullback, so that made a difference and it didn’t help them.”

After dealing with the Storm’s run game, Goodlove said the team will focus on the passing game for BHRA, especially wide receiver Mason Hackman.

“I have been coaching since 1987 and Hackman is as good as receiver I have seen in two-way football,” Goodlove said. “Every game that we have on film, no one has had a shot of stopping, so we know the challenge we have to go on Friday night and we are going to do our best to contain him.”

The game will be the third straight at the renovated Memorial Stadium and while both want different outcomes, Goodlove and Dodd know that Friday’s game will be memorable.

“We’ve had some barn burners there and games that we should have gotten beat, we have won and games I thought we should have won, we lost,” Dodd said. “I think for the last 15 years at Bismarck, this is the most intense, long-standing rivalry because we are both pretty good and it is near the end of the season. It will be a hostile environment and we like that because it gets us into the game and it will be a game they will remember for the rest of their lives.”

“We have been on the road so long, it is nice to have three consecutive home games and I couldn’t think of three bigger games,” Goodlove said. “If I had to pick three home games, Oakwood, Salt Fork and Bismarck would have been the teams I would have picked. Like the first two games, we expect a good game, but this is for the conference championship and we expect it to be a great atmosphere.”

Summary — Someone’s 0 has to go as both teams are trying to get their first VVC win of the season. The Comets have had bad luck for most of the season, including last week’s overtime loss to Hoopeston Area/Armstrong-Potomac, while the Buffaloes have not had much offense, even though Rylan Mosier scored twice in a 58-12 loss to Bismarck-Henning/Rossville-Alvin last week. The game will also have a ceremony naming the Oakwood football field after former coach Marty McFarland, who was the winningest coach in program history.

Summary — The Storm has lost two in a row, but to the two top teams in the VVC South. They will try to rebound against the Cornjerkers, who are one win away from five wins and a playoff berth. Hoopeston Area has not been in the playoffs since 1993 and has two chances to break that streak.

Summary — The hot Patriots have put themselves into second place in the WRC and hope to avoid a cool down against the just as hot Falcons. North Vermillion has won its last three of four, while Seeger has won the last four of five.

Summary — The Trojans have poured on the points during the season and has a good chance to end the regular season on a high note against the Panthers, who has not beaten Covington in 12 years. Also, quarterback Alan Karrfalt can add to his 2,652 passing yards this season, the top total in Indiana according to MaxPreps.

Summary — The Mustangs have lost their last three and facing a Wolves’ team that is trying to clinch the Wabash River Conference is a tough way to end the regular season. Parke Heritage have won four of its last five games as has scored at least 28 points in those wins.