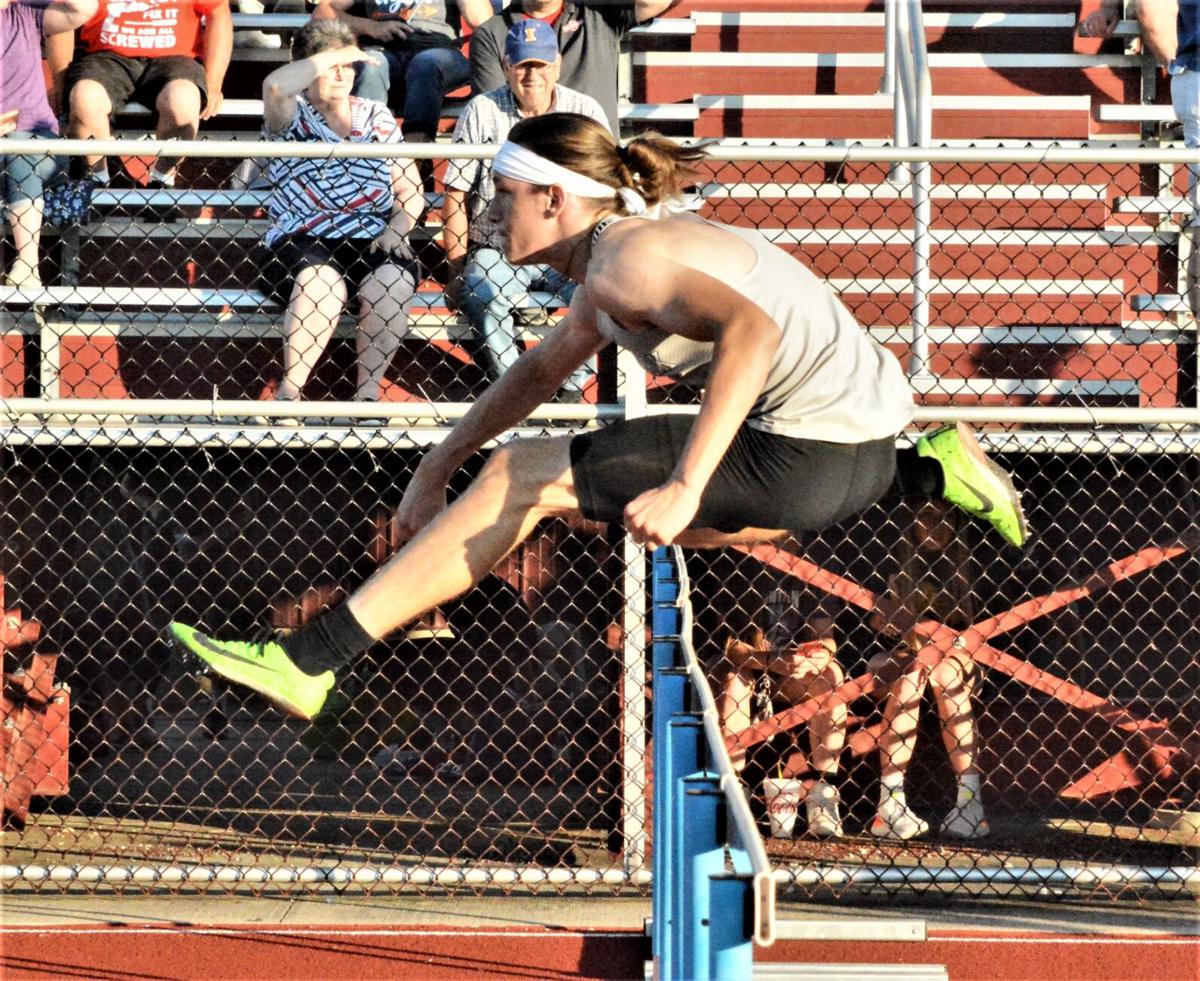 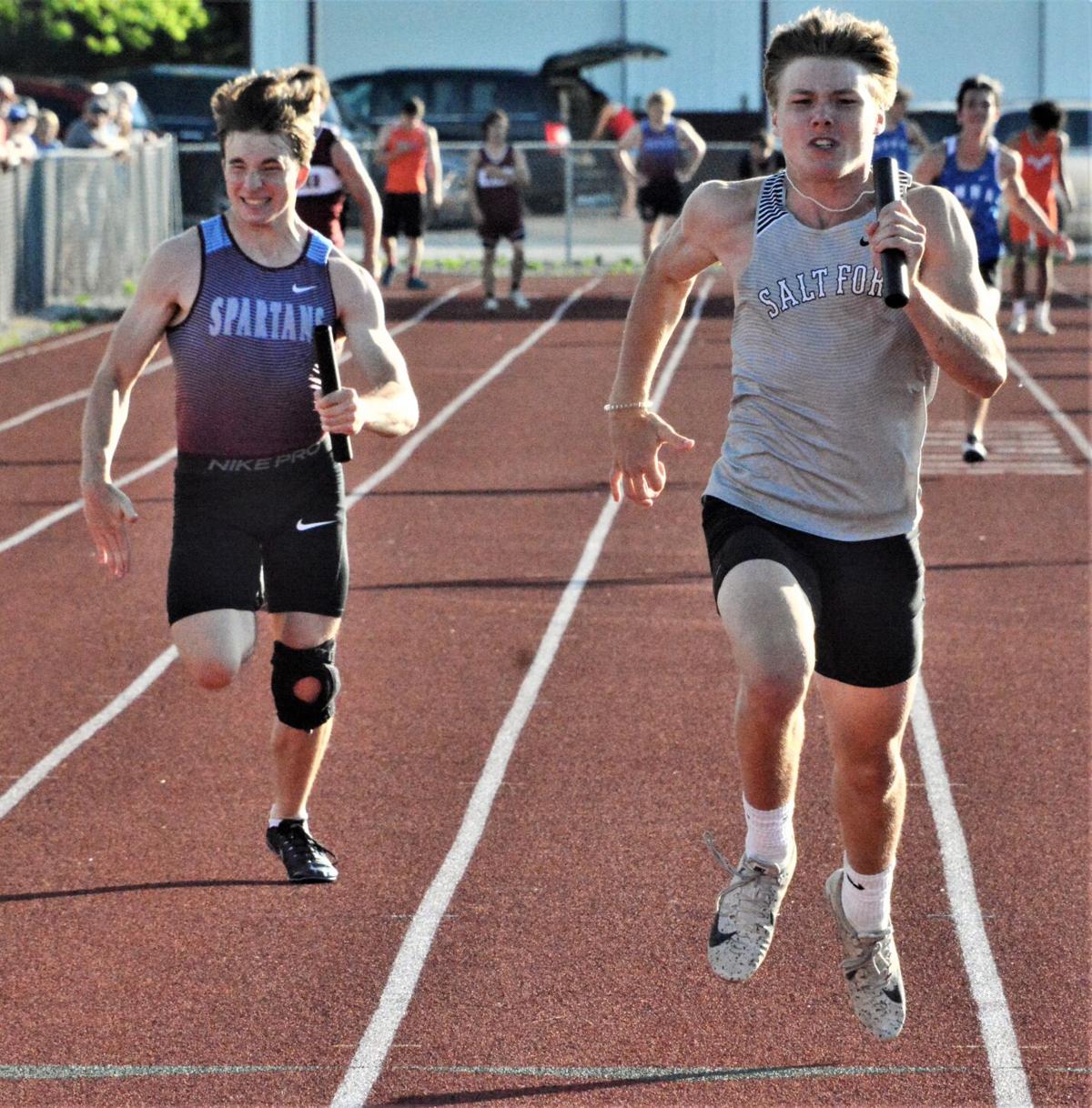 Salt Fork senior Tate Johnson, right, sprints for the finish line ahead of St. Joseph-Ogden’s Aidan McCorkle, left, in the 400-meter relay during Wednesday’s IHSA Class 1A sectional meet at St. Joseph-Ogden High School. The Storm won the event in a school-record time of 43.25 seconds.

Salt Fork senior Tate Johnson, right, sprints for the finish line ahead of St. Joseph-Ogden’s Aidan McCorkle, left, in the 400-meter relay during Wednesday’s IHSA Class 1A sectional meet at St. Joseph-Ogden High School. The Storm won the event in a school-record time of 43.25 seconds.

But then the COVID-19 Pandemic hit and his Storm didn’t get the opportunity to show how the program had helped them progress.

On Wednesday night in the 2021 IHSA Class 1A sectional meet at St. Joseph-Ogden High School, Salt Fork’s speed in the sprint relay events was on full display.

The Storm set a new school record in the 400-meter relay with a state-wide best time of 43.25 seconds.

“My sophomore year, I was on that 4-by-1 that set the school record in prelims,’’ said Salt Fork senior Tate Johnson. “I didn’t think it would ever be broken and, here we are and we broke it.’’

And this group with Johnson running the anchor along with sophomores Ben Jessup, Nathan Kirby and Ethan McLain, didn’t just break the record, they smashed it by 0.56 seconds. The old record was 43.81 seconds.

How did this foursome run so much faster than the group of Johnson, Max Branigan, Dawson Rogers and Caine Wilson?

“It’s our speed training program. It really helping us a lot,’’ Johnson said. “It’s something we have worked with every day. We know that we are faster and we still want to be faster next week.

Salt Fork’s group of Jessup, Kirby, McLain and Johnson actually came into the sectional meet with a little concern.

In their last meet before the sectional, the team dropped the baton.

“I told them that was their one time,’’ Surprenant said. “I thought we might get under 43 seconds, because we are so much better when we have someone on our shoulders.’’

St. Joseph-Ogden, who took second in the 400 relay and won the 800 relay, was the team pushing Salt Fork in both races.

“We wanted to win the 4-by-2, but honestly, I’m just glad we are going to state after missing state qualifying two years ago,’’ Johnson said. “I really wanted to go to state this year in more than one event.’’

Johnson will actually be competing in three events at next week’s IHSA Class 1A state meet.

The senior started his night with an amazing victory in the triple jump over his sophomore teammate Dylan Diaz.

“Tate had his steps too far and he had to adjust on the fly,’’ said Surprenant, noting that Johnson was in 4th place with just one jump remaining.

“My first three jumps were not the greatest,’’ Johnson admitted. “I had one last jump, so I had to do something.’’

Johnson acknowledged that jump gave him the momentum he needed for his two anchor legs in the 400 and 800 relay events.

“You can be fast, but you have to have the right mindset,’’ he said. “That jump built my confidence and I just knew we were going to run a good race.’’

While Johnson advanced to state in three events for the Storm, Kirby made it in four events as he added the 110 hurdles and 300 hurdles to the two relay events.

“That was definitely the goal coming into today,’’ said Kirby, who won the 110 hurdle title with a personal-best time of 15.22 seconds.

“I felt pretty smooth, but there are still some things that I can fix to get a better time,’’ he said.

And what are those?

“Being faster over the hurdle,’’ he said. “I ran a clean race, but I just need to get lower to the hurdle.’’

Also advancing to state for the Storm is sophomore Garrett Taylor, who was second in the shot put and the discus events on Wednesday.

Bismarck-Henning/Rossville-Alvin junior Eli Mojonnier qualified for state in two events as he won both the 800-meter (2:01.54) and the 1,600-meter races (4:35.32). Mojonnier was going for a third event but in the 1,600 relay he tripped, running the anchor leg and wasn’t able to finish.

Thankfully, it appeared that he avoided a serious injury as he did a full cool-down after the meet.

Joining Mojonnier at state will be the BHRA 3,200-meter relay team.

Georgetown-Ridge Farm/Chrisman had a pair of individuals punch their tickets for state as well on Wednesday. Junior Karson Lewsander was first in the high jump with a personal best 1.85 meters, while junior Jace Bina took second in the long jump.

Hoopeston Area senior Justin Jones qualified for state in both the 100 and 200 races. Jones had a personal best time of 22.99 seconds in the 200.

St. Joseph-Ogden won the team title with 147 points, while Salt Fork was second with 90.

“I anticipated that,’’ Surprenant said. “St. Joe was solid in every event tonight. We were more concerned with getting the most people to state.’’