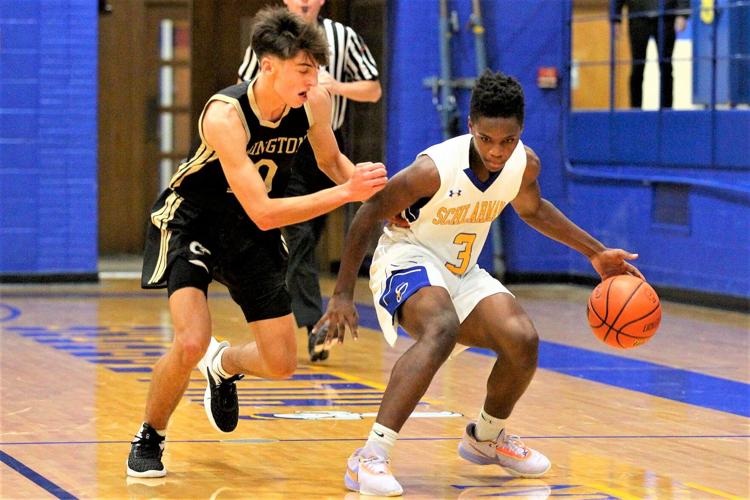 Schlarman Academy freshman Jerrius Atkinson attempts to dribble around Covington junior Coye Ferguson during the second quarter of Monday’s game in the Topper Classic. Ferguson had 17 points and 13 rebounds as the Trojans beat the Hilltoppers 62-47. 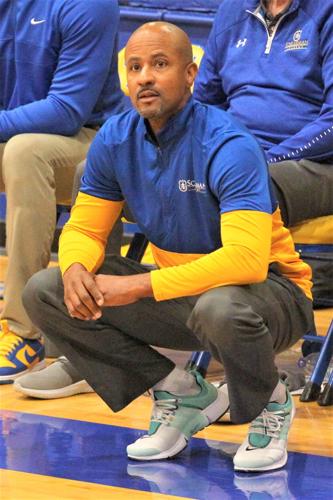 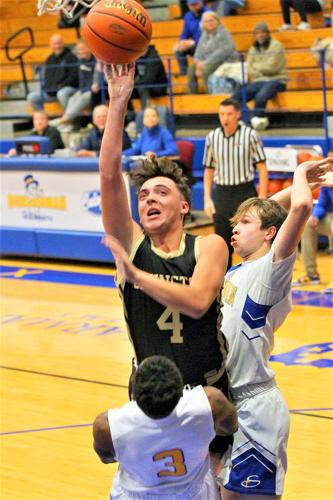 Covington senior Karver Fye crashes into Schlarman Academy freshman Jerrius Atkinson on a drive to the basket in the first quarter of Monday’s game. 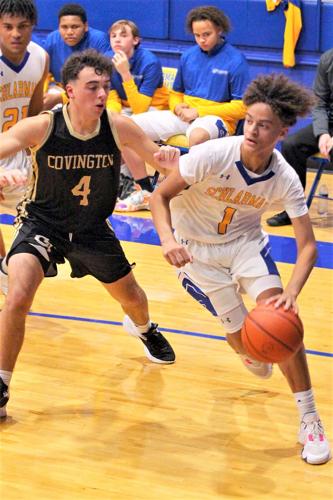 Schlarman Academy freshman Keison Peoples drive around Covington senior Karver Fye in the second half of Monday’s game. Peoples had a game-high 21 points in a losing effort as the Trojans defeated the Hilltoppers 62-47.

Schlarman Academy freshman Jerrius Atkinson attempts to dribble around Covington junior Coye Ferguson during the second quarter of Monday’s game in the Topper Classic. Ferguson had 17 points and 13 rebounds as the Trojans beat the Hilltoppers 62-47.

Covington senior Karver Fye crashes into Schlarman Academy freshman Jerrius Atkinson on a drive to the basket in the first quarter of Monday’s game.

Schlarman Academy freshman Keison Peoples drive around Covington senior Karver Fye in the second half of Monday’s game. Peoples had a game-high 21 points in a losing effort as the Trojans defeated the Hilltoppers 62-47.

DANVILLE — Experience is a relative term in high school athletics as Monday’s second game in the Topper Classic proved.

Both teams saw areas with positive play and areas that needed improvement for their young squads.

“It was fun, but we are still young and we have a lot of problems to solve,’’ said Keller, the only returning starter for the Trojans, who had three seniors and two juniors in their starting lineup.

“We have some athletes that are willing to compete, but they have to learn to compete at the varsity level — it’s a big difference than junior high,’’ said Peoples. “I’m glad they accept the challenge against a very good, mature Covington team.’’

How can that be?

Simple, the Hilltoppers had two freshmen, two sophomores and a senior — their only senior — in the Monday’s starting lineup.

“There is a lot of learning and a lot of teaching that we are going to need,’’ said Peoples, who won back-to-back state titles with the Schlarman Academy girls basketball team in 2018 and 2019. “We have to be patient with these young men.

“I am appreciative of their effort, but we still have a long ways to go.’’

Keller admitted that the other four starters for the Trojans (1-0) spent parts of Monday’s game getting their nerves out of the way.

“Being the only returning starter, it’s fun because I’ve already been through it and they are going through it now,’’ he said. “I have to make sure that I keep my play up, so that I can help them step up to being a starting varsity player.’’

Keller was able to do that as he dished out a game-high six assists to go along with his 20 points — 11 of those coming in the second half.

“Duncan is doing everything that we ask of him,’’ Covington coach Adam Morgan said. “He is guy that we are leaning on early. We need him leadership and he is getting better at seeing the floor and dishing to his teammates.

“Most of our guys were JV players last year and playing varsity is just a different speed. It’s hard to even mimic in practice. We will keep getting better as we’ve only had 11 practices so far this season. We are kind of learning on the fly.’’

That was also the case for the Hilltoppers, who seemingly would have stretches of good and bad basketball.

“Consistency is going to be our biggest challenge right now,’’ Peoples said. “Taking care of the ball, staying composed, not getting too excited with offensive runs and defensive runs, just playing consistent and being poised. When you are not able to do that, it is a sign of immaturity.’’

Covington built leads of 17-8 and 22-14 in the first half before Schlarman scored nine of the final 12 points in the second quarter to close within 25-23 at halftime.

“You want them to compete and they did,’’ Keith Peoples said. “That’s a great sign for a first game.’’

The Schlarman second-quarter run was also a result of some breakdowns with the Covington defense.

“It seemed like they were able to drive it down the lane anytime they wanted to,’’ said Keller. “When we were driving, they were doing a good job of stepping and taking those charges.

“We needed to do a better job with our helpside defense and start stepping in to take those charges as well.’’

In the second half, the Trojans did just that and it fueled a 9-2 run that gave Covington a double-digit lead that it would never relinquish.

“Once we figure that out and talk a little better, I think we will be solid defensively,’’ Morgan said.

Covington junior Coye Ferguson played a important role in his team’s strong second half surge as he pulled down 10 of his game-high 13 rebounds in the game’s final 16 minutes to go along with 17 points.

“He is playing a new position this year,’’ Morgan said. “He is more of a post player this year because he can get up above the rim. We are not a big team, but if we can keep him jumping that high and grabbing those rebounds it will definitely help us offset some of our height issues.’’

Joining Keller and Ferguson in double figures for Covington was senior Karver Fye with 10 points, while Schlarman got 10 points from sophomore Jerry Reed, while freshman Jerrius Atkinson had 8 to go along with a team-high nine rebounds.

Covington’s next game in the Topper Classic is Tuesday night against Paris. Tipoff is set for 6 p.m. (Central). While Schlarman is idle until 7:30 p.m. Friday when the Hilltoppers will play Paris.