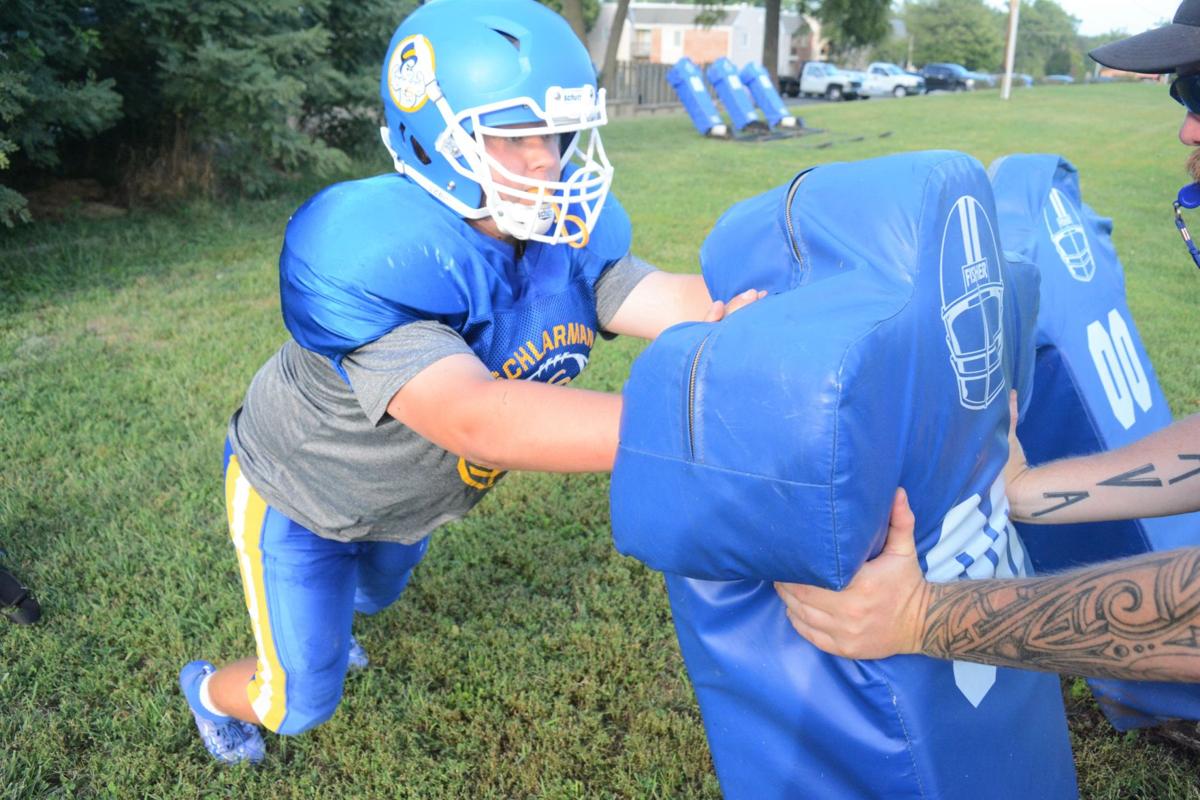 Schlarman Academy’s Quenton Pratt pushes on the sled during Tuesday’s practice at the school. Pratt, who was born deaf, plays on the offensive and defensive lines for the Hilltoppers, who will host the Milford/Cissna Park Bearcats this Friday night at Drummy Field. 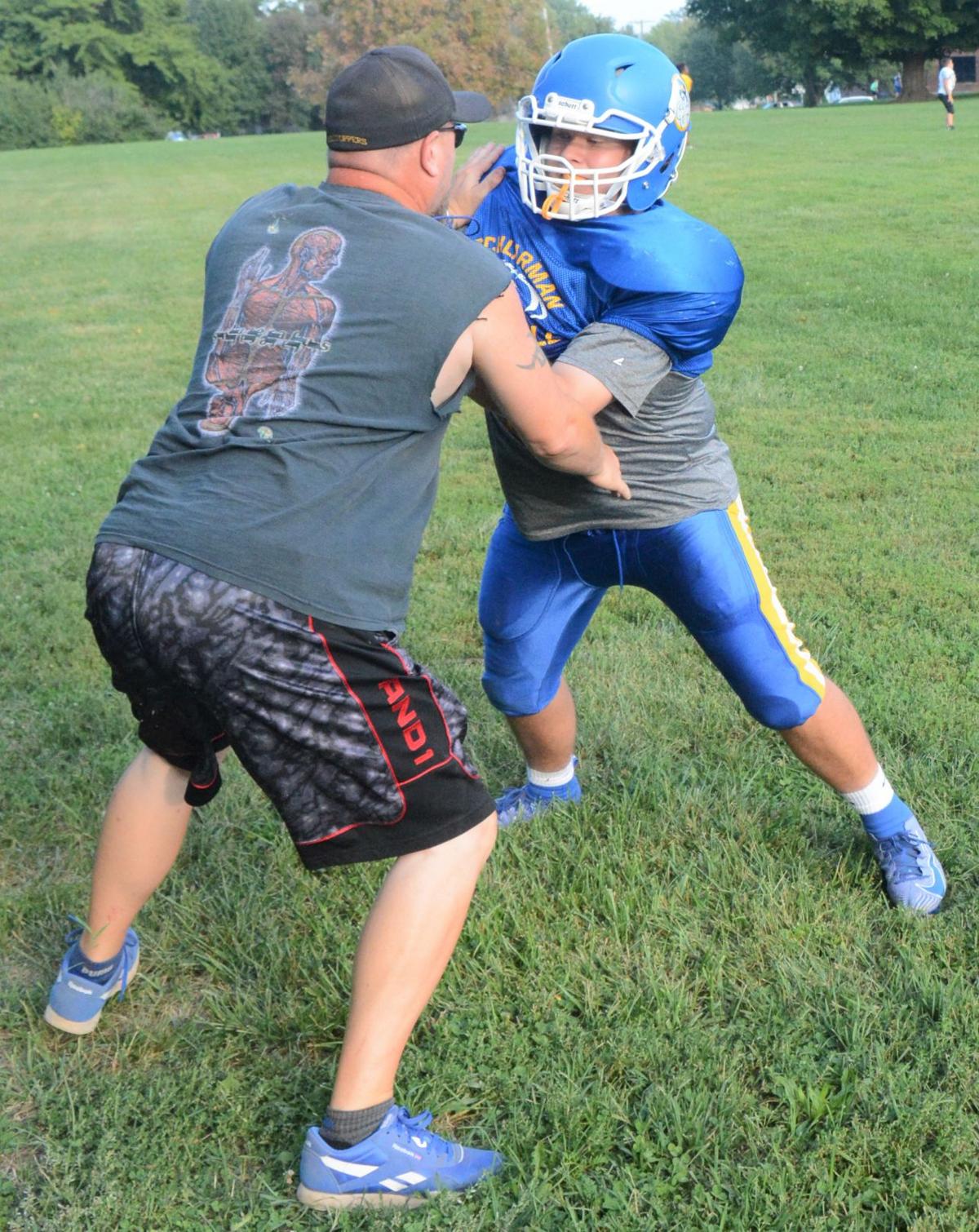 Schlarman Academy lineman Quenton Pratt participates in a drill with Schlarman line coach Jason Dixon. Dixon and Chad Harden have helped Pratt in his lone season with the Hilltoppers.

Schlarman Academy’s Quenton Pratt pushes on the sled during Tuesday’s practice at the school. Pratt, who was born deaf, plays on the offensive and defensive lines for the Hilltoppers, who will host the Milford/Cissna Park Bearcats this Friday night at Drummy Field.

Schlarman Academy lineman Quenton Pratt participates in a drill with Schlarman line coach Jason Dixon. Dixon and Chad Harden have helped Pratt in his lone season with the Hilltoppers.

DANVILLE — Quenton Pratt is enjoying a season full of new challenges and successes as a lineman for the Schlarman Academy football team.

But challenges are something that Pratt is more than used to.

The senior was born deaf, but parents Amy and Chris Pratt had made sure that life would be normal for Quenton by getting him cochlear implants.

“He went to Carle’s echo, a special school for kids to learn to talk and at 2, he was implanted on the left ear and when he was three and implanted in the other one,” Amy Pratt said. “We have always treated him as a normal child. There are times we forget he’s deaf honestly. He talks well, reads lips well and his implants work well. We just encouraged him to be as normal as possible.”

But when it came to football, the family held back on Quenton participating until this season, when the Hilltoppers started their own team in 8-man football.

“Last year, I didn’t want to play and I got a chance to play now and I like it,” Quenton said. “I wish I would have done it since I was little. My mom thought it was a problem and I didn’t think it would be, but things have been going well.”

“A few times, he had mentioned football and we said it would be dangerous because of the implants because they are mounted to his skull,” Amy Pratt said. “I was apprehensive because yes, he is big but this is something that he has never done. Between the coaches’ help and his endurance, it has been amazing. This is one more thing that is not going to hold him back in life.”

When he finally got on the field, he not only found help with head coach Matthew Blurton, but also with line coaches Jason Dixon and Chad Harden

“He has taken up to everything like a sponge. He learns everything you teach him. Every week you see him be better as a player,” Blurton said. “I knew him for a few years, so I know about the implants were in and there were obstacles that we had to get over but you wouldn’t even know he was deaf now. A lot of it was the QB’s cadence, He plays offensive line and we have to make sure the QB gets his cadence louder than usual. But on defense, he doesn’t worry about cadences, he watches the ball and it has helped him a lot on defensive line.”

With the implants, they have a tendency to fall off during games and that is when Quenton steps off the field and get them fixed.

What has helped Quenton on the field is what a lot of players use as motivation — the past.

“Since he has been out there, you see a different Quenton than what I have known for the past 3-4 years,” Dixon said. “I’ve known him as the quiet type and once he got out here, he’s just been a great player.”

Technique helps in getting that anger out and Dixon has especially been great in helping with that technique.

“Coaching him has been fun, it is challenging. With first year players, you don’t have any bad habits to break. You can teach them the right way of the game,” Dixon said. “With Quenton it is different, because you have to talk at an elevated voice and when we see him take his helmet off, he is not being lazy, he is fixing his implant. The first week with helmets was difficult because there is non-stop action and we have a player taking his helmet off and you have to remind yourself about the implants.

“He’s a great kid and a great addition to the team,” Harden said. “There have been challenges with the implants and the coaching staff learning the difference with the hearing, but it has not been that big of a deal at all. He works hard and has improved every week.”

“Everyone has been treating me right. They realize that I am struggling, but they are working with me and helping me out and learning new stuff,” Quenton said. “They work with me and they work around my problems. They talk louder and these (the implants) fall out during practice and they know I have to go out and fix them.”

With the season getting into the middle part along with a big game Friday against defending Illinois 8-man champions Milford/Cissna-Park, Quenton said there are many more chances to make his senior year the best of his young life.

“I think it is fun getting under the lights and showing what I have, I never knew I was able to do this until I started to do it,” Quenton said.

“He is one heck of a player, I am glad he came out and his parents let him come out,” Dixon said. “He’s a pleasure to have on the team, and he is able to get the inner beast out. That is what I like about him.”