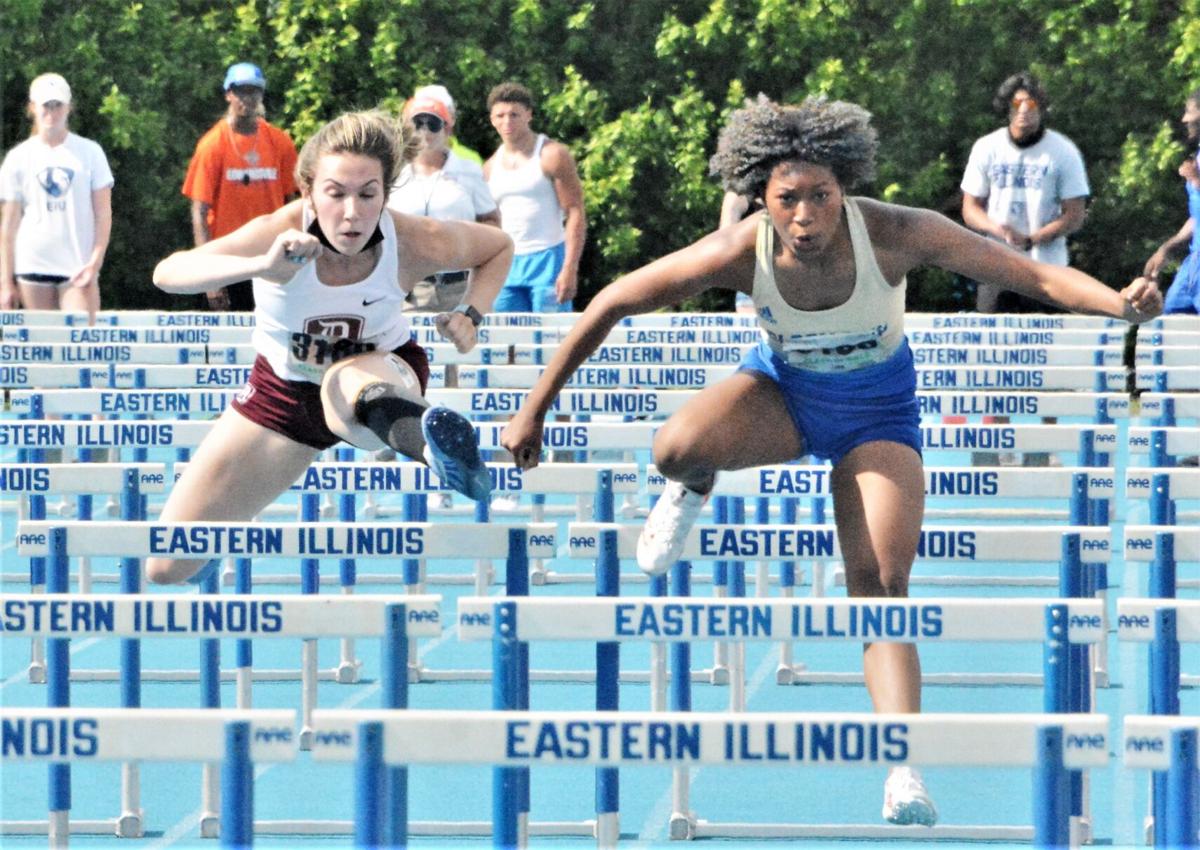 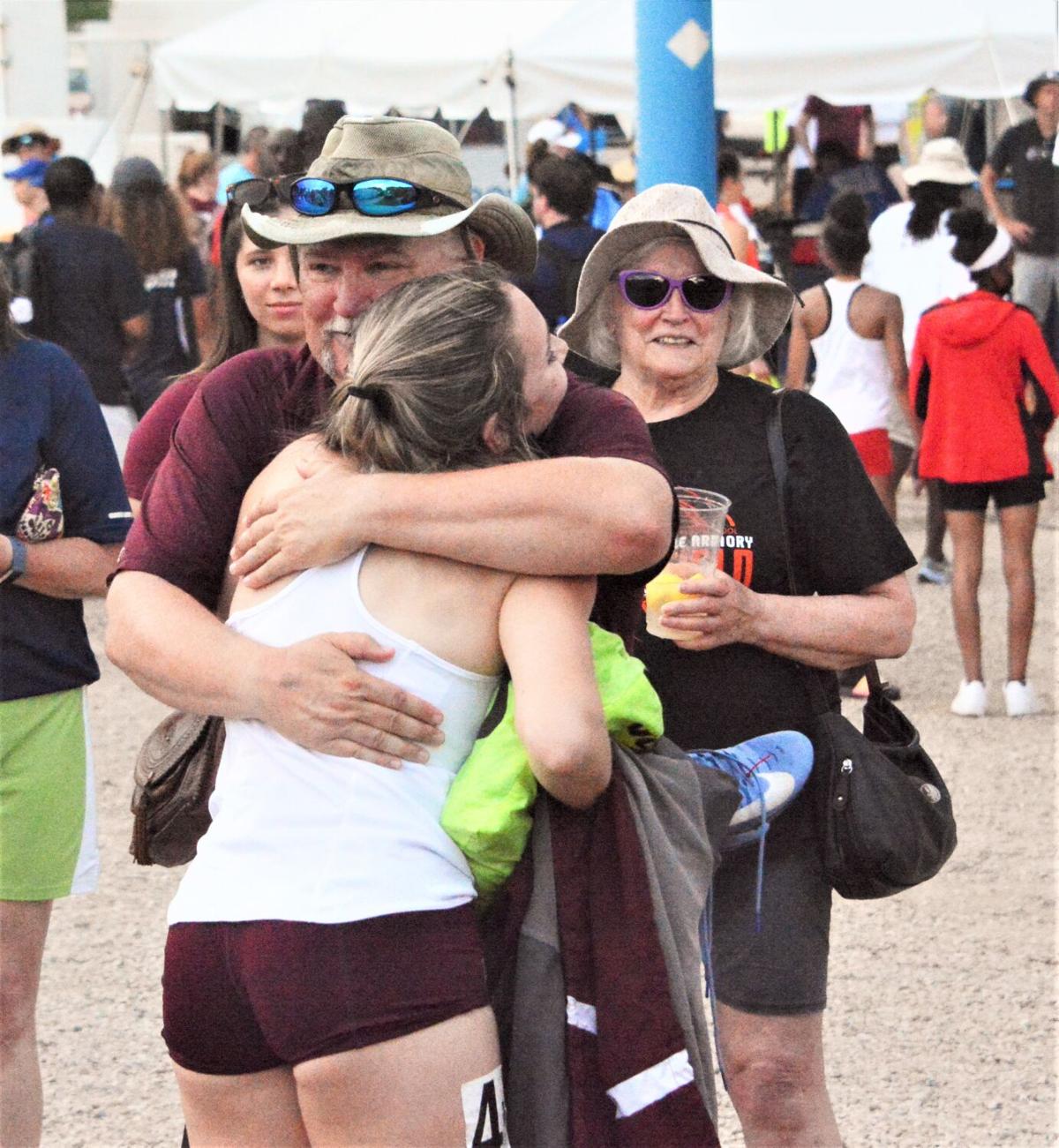 Danville senior Hallee Thomas gets a congratulatory hug from her father, Mitch Thomas, after placing second in the 300 meter hurdles at Saturday’s IHSA Class 3A state track meet at O’Brien Field in Charleston. Victoria Spagnola just barely edged out Thomas for the title. Spagnola’s time was 43.98 seconds while Thomas clocked in at 44.02.

Danville senior Hallee Thomas gets a congratulatory hug from her father, Mitch Thomas, after placing second in the 300 meter hurdles at Saturday’s IHSA Class 3A state track meet at O’Brien Field in Charleston. Victoria Spagnola just barely edged out Thomas for the title. Spagnola’s time was 43.98 seconds while Thomas clocked in at 44.02.

CHARLESTON — Nearly all of the greatest athletes in Danville High School history are immortalized with their photo on the walls of the clocktower entrance.

Danville senior Hallee Thomas walked past those photos thousands of times during her high school career. Her goal was to see her photo up there someday.

On Saturday afternoon, Thomas just barely missed becoming the sixth state champion in school history as Victoria Spagnola of West Aurora edged her by four-thousandths of a second for the state championship in the 300-meter hurdles at the IHSA Class 3A State Track and Field Meet at O’Brien Field on the campus of Eastern Illinois University.

“It was awesome. It was the best race that I could have ever asked for,’’ said Thomas, whose time of 44.02 seconds was a personal best. “The only thing that could have been better was maybe getting her at the end.

“I’m just so grateful to go out like that.’’

As close as it was, did Thomas even think for a second that she might have won?

“I knew I was a teeny bit behind her,’’ she admitted. “I thought I might have had her going into the last hurdle, but she sneaked by me.’’

And while she won’t go onto the wall as a state champion, the runner-up finish has earned Thomas a spot on the wall alongside of the other top athletes in school history.

Not bad for someone that hadn’t ever qualified for the state meet in the 300 hurdles before this season.

So, what was the difference this season for Thomas?

“Running cross country,’’ said Thomas. “As much as I hate to admit it, my coaches were right about that one. I definitely had a better base than before and I trained harder in the offseason that I ever had before.’’

Where her training from cross country helped the most was in the final half of the race.

With two hurdles and about 75 meters remaining, it looked like Thomas had a slight lead but Spagnola, a senior, retook the lead and won the race with her personal best time of 43.98 seconds.

The second-place finish for Thomas came just about an hour after she placed fifth in the 100-meter hurdles with a time of 14.90 seconds. It was a race that Thomas admittedly thought she should have done better.

“I was hoping that I would go a little bit faster because my seed time was a lot quicker,’’ said Thomas, whose personal best of 14.66 seconds came in last week’s sectional meet at O’Fallon. “In between the hurdles, I wasn’t as fast as I am usually and my lead leg was out in front of me too much.’’

But even with those miniscule flaws in her technique, Thomas was still very pleased to secure her first-ever state medal after failing to reach the state finals during her freshman and sophomore seasons.

And it won’t be the last time that she runs on the track at O’Brien Field in Charleston.

Earlier this year, Thomas signed a National Letter of Intent to run track for the Eastern Illinois University Panthers.

“It’s really special to end my high school career on the same track that I’m going to call home for the next four years,’’ said Thomas, who spent Friday reminiscing about her years at the Wayland-Young Athletic Complex in Danville. “I took a photo and posted it to Twitter.’’

And while that photo will always be a memory on social media, there is another photo that Thomas and everyone else will see when they enter the clocktower entrance at Danville High School. It will be her photo with all of the Danville greats.