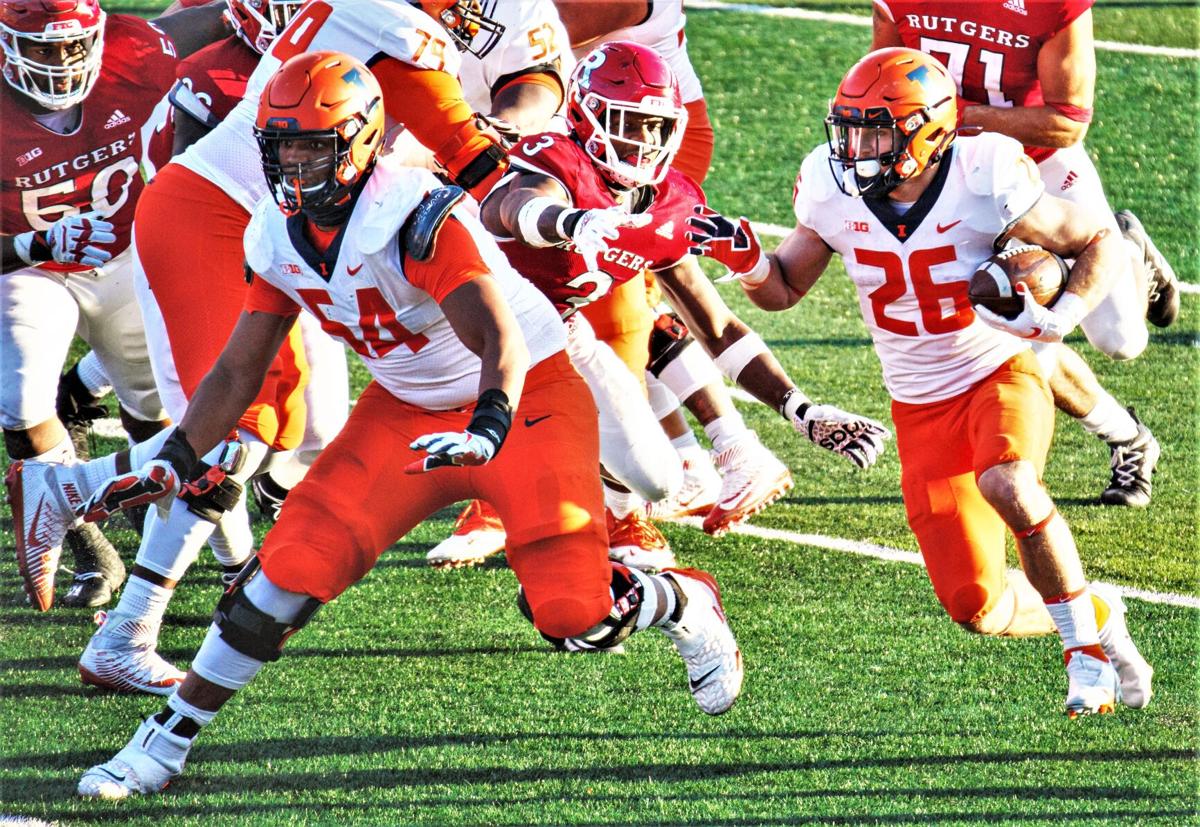 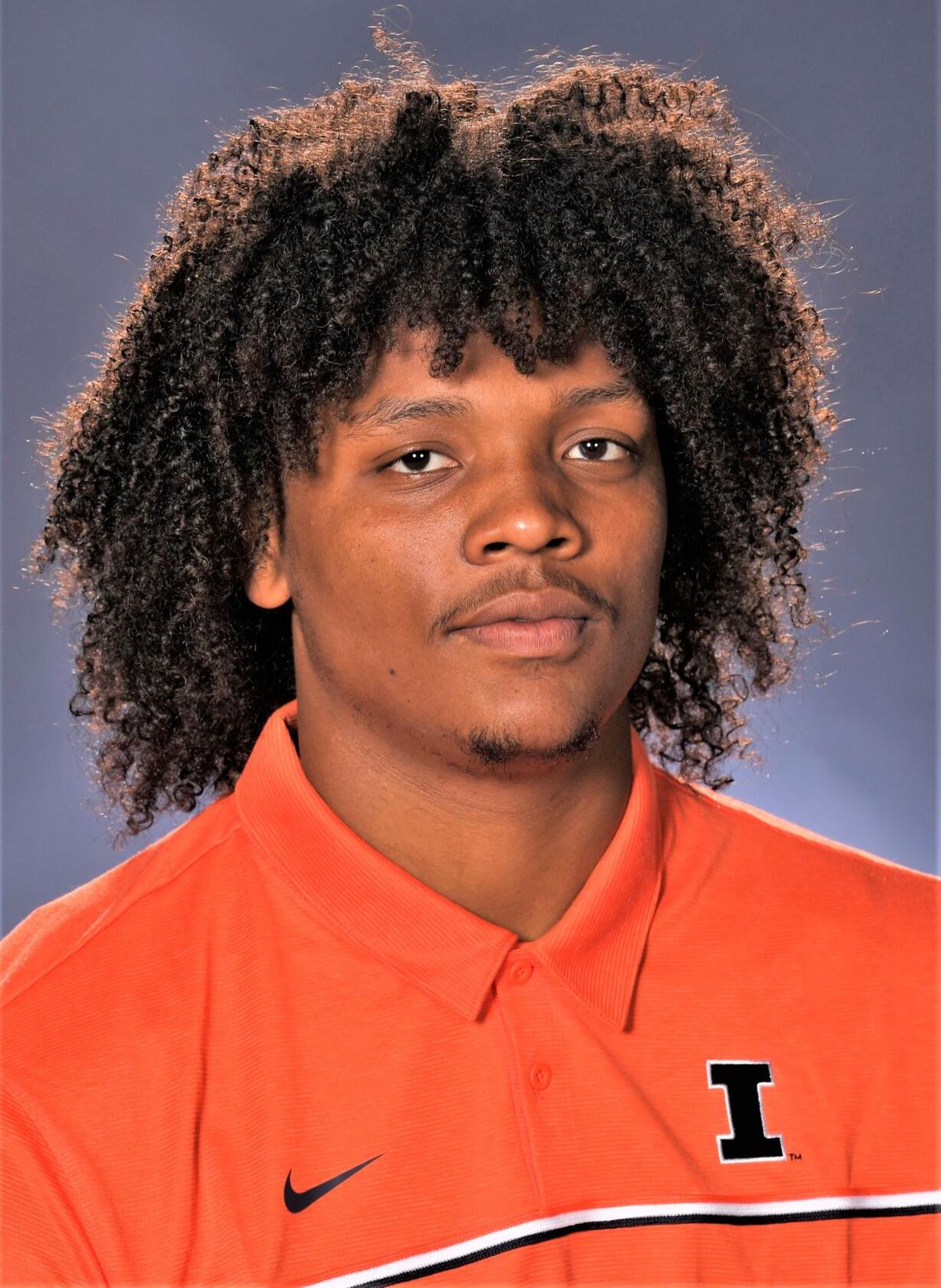 CHAMPAIGN — Older brothers have a way of toughening up their younger siblings.

Former Danville standout Julian Pearl is definitely a product of that education. Tayvion Johnson, who is seven years older, and Avery Pearl Jr., who is four years older, had the task of taking care of their younger brother during the summer.

“Every summer, I would stay with my brothers. We would go through football and basketball camps,’’ said Julian on Tuesday. “In the mornings, it would be like 6 a.m. for football camp and then in the afternoon it was basketball camp. We would get home like at 5 p.m. That was every summer until they graduated.’’

And they didn’t just helped get Julian to these camps.

“There was a lot of roughhousing,’’ Julian added. “I think it helped me out, to have more of an edge to me.’’

Maybe it was all of that time with his older brothers that paid dividends when Pearl was thrust into Saturday’s Big Ten Conference contest for the Illinois Fighting Illini when senior tackle Alex Palczewski went down with an apparent leg injury.

Pearl played 77 snaps in the 23-20 victory over Rutgers and helped Illinois rush for a season-best 338 yards.

“It was a new feeling at this level,’’ said Pearl, who had only played a handful of snaps in his first two seasons with the Fighting Illini. “It’s something that you have to be ready for, but you hate that it had to happen like that.

“I kept thinking about how I had to do better and that I had big shoes to fill at the moment … I knew the other guys on the line didn’t have trouble, so I had to play to their level.’’

The reviews from his peers and the coaching staff were all positive.

“He stepped in and we were able to keep our offense going,’’ said head coach Lovie Smith.

“Julian Pearl stepped right in and I thought did a really good job for his first extensive playing in a crucial situation,’’ according to offensive coordinator Rod Smith.

“Coming in during the middle of the game is super tough position to be thrust into,’’ said senior center Doug Kramer, who was returning to the field after missing two weeks because of COVID-19 contact tracing protocols. “I thought he handle it extremely well. I think you saw some of the things that Pearl does well, especially in the run game because we ran the ball quite a lot.’’

Not bad for a guy who originally thought he would follow older brother, Tayvion Johnson, onto the basketball court rather than his older brother, Avery Pearl Jr., onto the football field. Both Johnson and Pearl played collegiately at Augustana College in Rock Island.

“I was getting mail and I realized all this mail was from football teams and not one basketball letter,’’ said Pearl, who played both football and basketball for the Vikings, along with being a thrower on the track team. “I finally came to the conclusion that basketball was probably not going to work out for me. I just bought into football. I decided to be a team guy. Wherever they needed me at, wherever they could use me, I will go and give my best effort to it.

“It was definitely an easy decision. I do love basketball, but I understood at the time it’s not going to take me where I want to be.’’

That was never more evident than during his senior season with the Vikings when Pearl, who had been playing tight end and defensive end, was moved to an offensive tackle position.

“What I loved about him was he was a big athlete,’’ said Lovie Smith. “When a guy can play basketball that big, you think that you have something there. We recruited him as a defensive linemen.

“Every defensive linemen we recruit, if they can’t play there the next stop is the offensive line.’’

Sure enough after his freshman season at Illinois, Pearl was making the switch.

“I thought they were doing to move me to 3-tech (defensive tackle) or something,’’ Pearl said. “I ended up going to the o-line and it’s been the best move for me, honestly.’’

Pearl acknowledges that life as an offensive lineman is totally different.

“For defensive line, it’s a lot about knowing your job and what you have to do — your direct assignment,’’ he said. “But at tackle, we have to read the whole defensive scheme. I have learned to read the safety, do all my reads and communicate with all of my linemen — cause everything I see affects all of the linemen.’’

Both Lovie Smith and Rod Smith have confidence in Pearl moving forward this season.

“It’s a just a matter of him putting it all together,’’ said Rod Smith. “His best football is still ahead of him. He was thrown in.

“It was good to see him perform like he did.’’

So, does anything change this week as Pearl prepares for possibly his first collegiate start if Palczewski isn’t able to play?

“Not a lot has changed,’’ he said. “We prepare ourselves, the 1s and 2s, for anything that happens. A couple weeks ago, some guys got COVID and they (coaches) put the emphasis on this is college football and you have to be ready at all times.

“The difference for me is my mindset … I have to stay on edge.’’

That’s something his older brothers have already taught him to do.