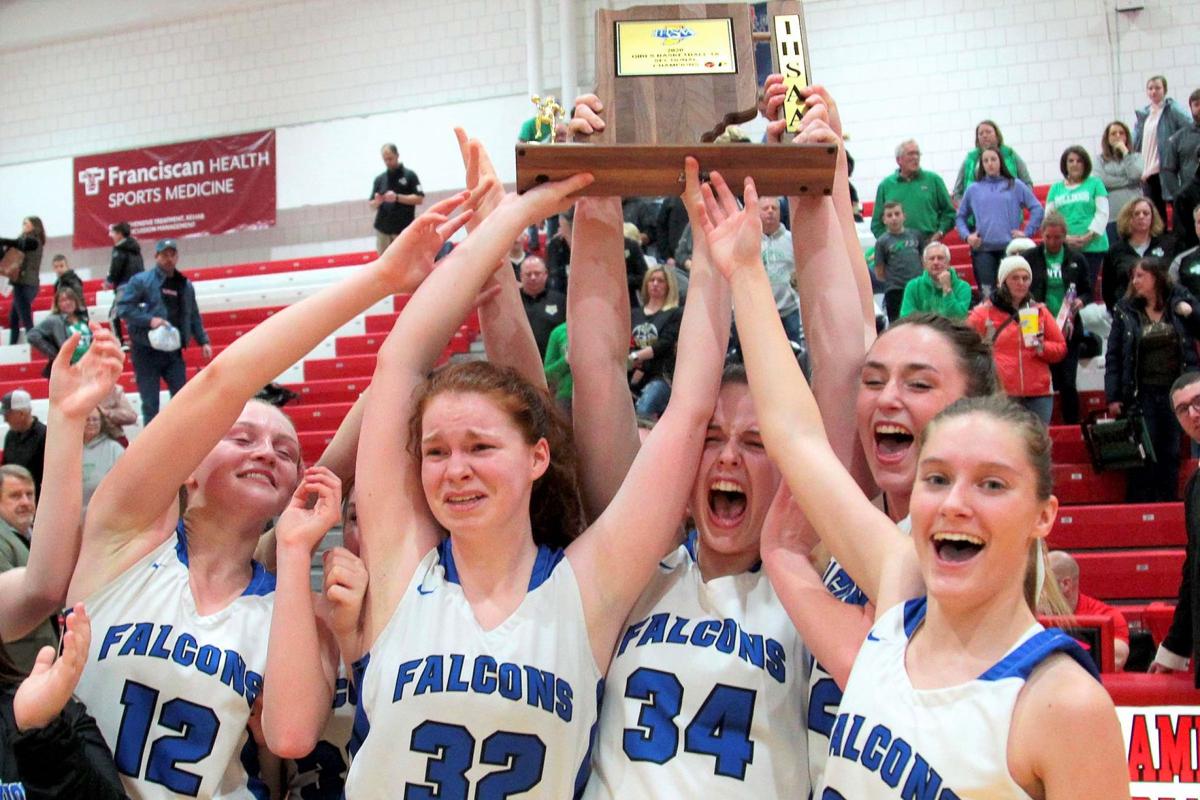 Members of the North Vermillion basketball team hold up the sectional trophy on Saturday in Attica,Ind. North Vermillion defeated Clinton Central 49-43 to win the Sectional 54 championship. 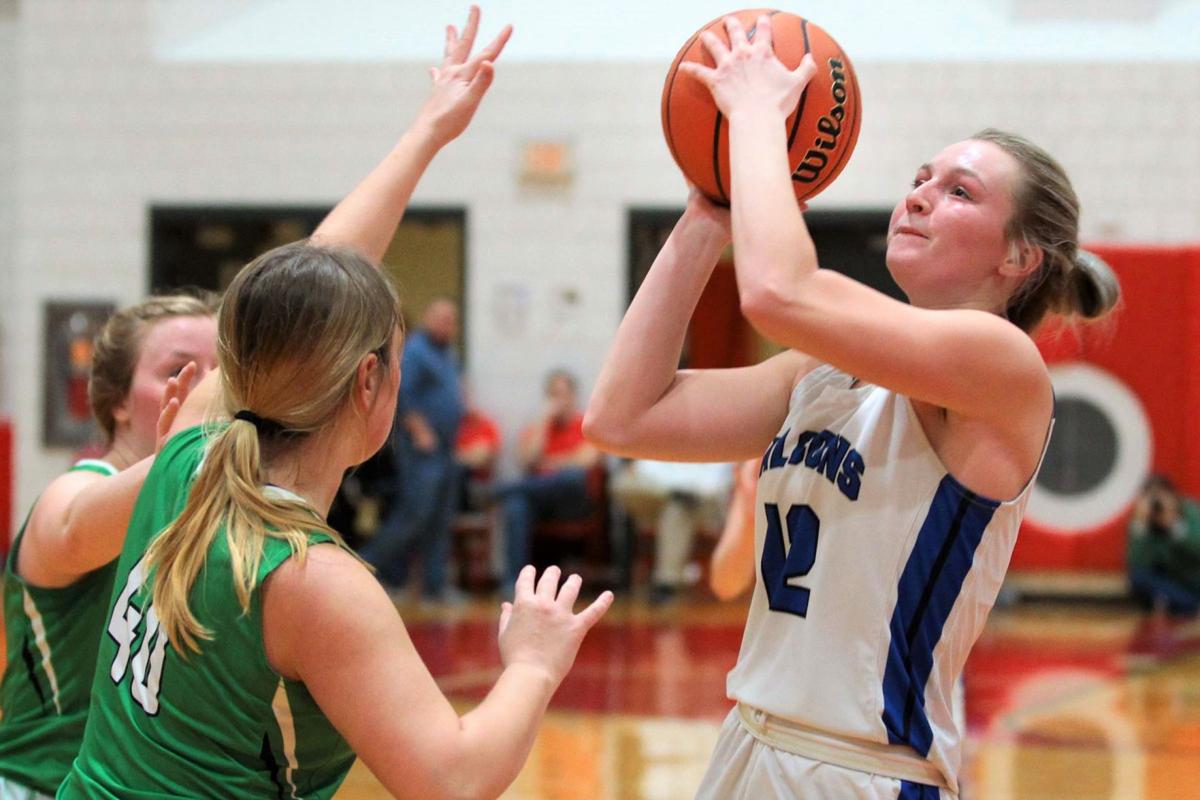 Ava Martin of North Vermillion shoots over Cassidi Jenkins of Clinton Central for two of her game-high 16 points.

Members of the North Vermillion basketball team hold up the sectional trophy on Saturday in Attica,Ind. North Vermillion defeated Clinton Central 49-43 to win the Sectional 54 championship.

Ava Martin of North Vermillion shoots over Cassidi Jenkins of Clinton Central for two of her game-high 16 points.

ATTICA, Ind. – For the second game in a row in sectional play, the North Vermillion girls’ basketball team found itself trailing late in the fourth quarter only to come back and win the contest.

The Falcons trailed Clinton Central by four points going into the fourth quarter and were down one with 2:59 to go before rallying for a 49-43 win.

It was a ragged game with both teams committing numerous turnovers against a strong defense by the opponent, many of the turnovers being unforced.

“I think their trapping defense made us hesitate,” Hannah Ellis, a senior post player for the Falcons said. “We knew what we were supposed to do, but they were very quick and made it hard to pass, so we hesitated and that led to them getting in the passing lane.”

North Vermillion took a 13-10 lead into the second quarter on the Bulldogs, but Clinton Central tied the game at 17-all with three minutes left in the half and then took the lead.

A 7-0 spurt in about one minute of game time lead to a 24-17 score, but the Falcons got one last basket, a lay-up by Ava Martin off a pass from Brianna West to trail 24-19 at the halftime intermission.

Martin got things going for North Vermillion as the third quarter began, hitting another lay-up also thanks to another assist by West.

Clinton Central followed with a three-pointer and then the Falcons edged closer getting two free throws by Ellis and a basket by Rylee Dowers from an assist by McKenzie Crowder to get within two at 27-25.

In that third period, it seemed whenever the Falcons got close, the Bulldogs found free throws or a three-pointer to pull away again.

After a pair of Clinton Central free throws, Martin got a pass from Ellis for a lay-up that closed the gap to one again at 28-27, only to see the Bulldogs hit another trey.

With 1:26 to go in the third period, Clinton Central made yet another trey with Dowers responding with two made free throws to bring North Vermillion within four, 36-32, going into the fourth quarter.

That period opened with Crowder hitting an open Dowers for a trey and then Martin, who had been attacking the basket with putbacks after rebounds, hit a free throw to tie the contest at 36-all with about six minutes to play.

“That my number one priority – getting rebounds,” Martin said. “We were all shooting okay, but my job is to rebound and score when we miss.”

Clinton Central went up by one on a free throw, but Ellis matched her before Crowder broke free on a fast break for a 39-37 score in favor of North Vermillion.

The Bulldogs took the lead right back on a free throw and another basket at that aforementioned 2:59 mark, but Martin scored inside and then Crowder found West free under the basket and the Falcons were on top 43-40.

Clinton Central had a couple of chances to close the gap, but the best they could muster was one free throw before Crowder made a pair of them for a 45-41 score with 44 seconds left.

Mark Switzer, the Falcon head coach, said he gave his team an offense to attack the Clinton Central trap, but that there were times when the team did not use it.

“The girls were supposed to cut to the middle, but they quit doing it,” he said. “They kept passing the ball around the outside and eventually the defense figured that out and forced a turnover.”

Switzer noted that for the last six or seven games his team has been up and down and he said he reminded his squad of that.

“Last night we did not play a very good game,” he declared, “but tonight we looked better. We’re still not where we should be, but we’re improving.”

According to Falcon Athletic Director Martin Brown, with the win, North Vermillion advances to play Blue River Valley in the opening game of the Tri-Central Regional at 10 a.m. Eastern time next Saturday.

James H. Mariage, 83, of Georgetown, passed away Wednesday, February 19, 2020, at Pleasant Meadows in Chrisman. Per his wishes, he will be cremated, with private family burial at Forest Park Cemetery in Georgetown. James was born December 5, 1936, in Taylorville, Ill., to Henry and Dora Evel…

Eugene Donald Fritsch was born March 25, 1928, to John H. Fritsch and Mary (Marie) B. (Kopf) in Danville, Ill. Gene passed away Tuesday, February 18, 2020, at Colonial Manor, where he had been a resident for 16 months. Gene was a baptized, confirmed, life-long member of Trinity Lutheran Chur…