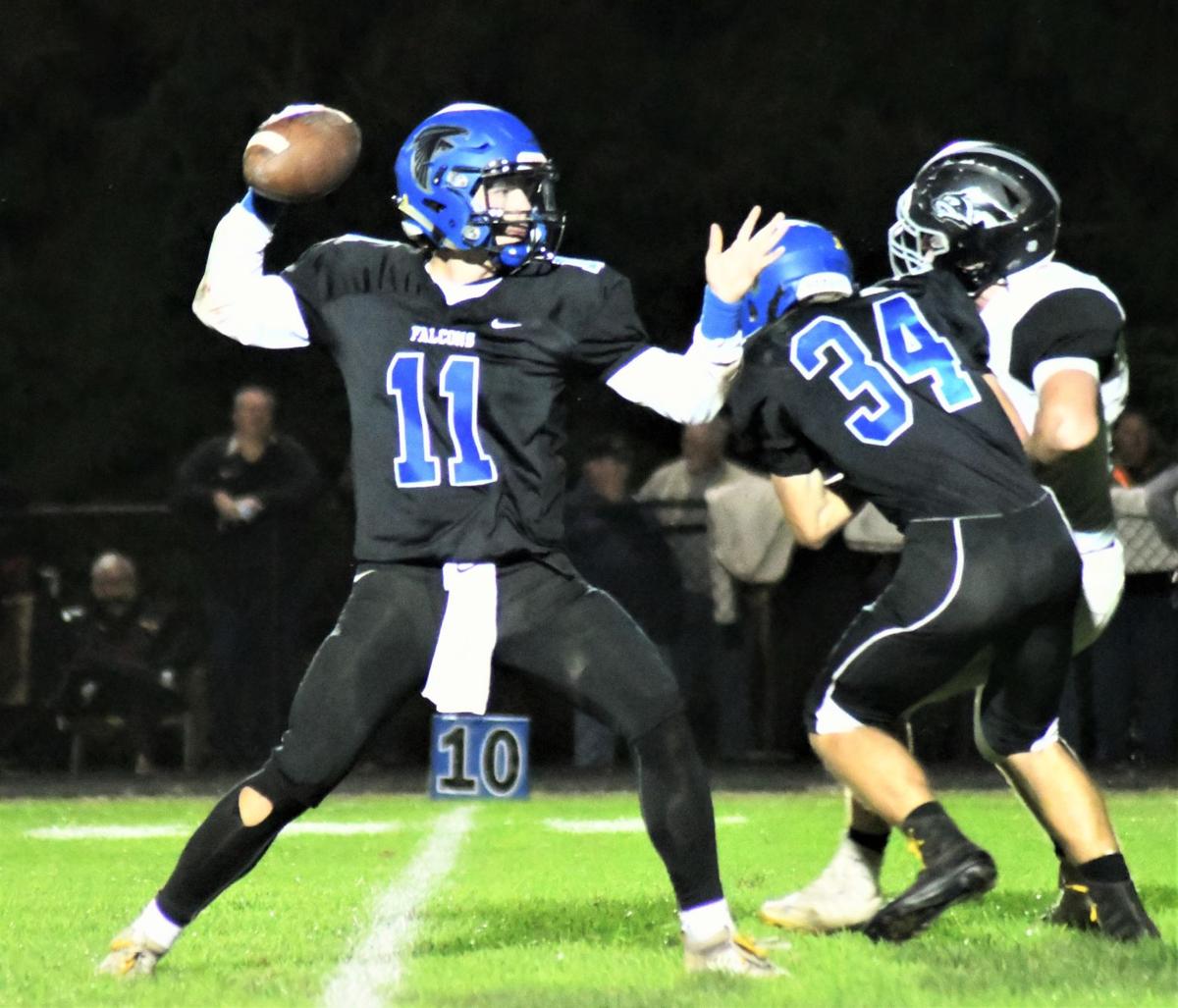 North Vermillion senior quarterback Brennan Ellis prepares to throw a pass in the second quarter of a Oct. 4 game against Parke Heritage. Ellis has directed to Falcons to an 11-1 record, a Wabash River Conference title and the IHSAA Class 1A Sectional 45 championship this season. 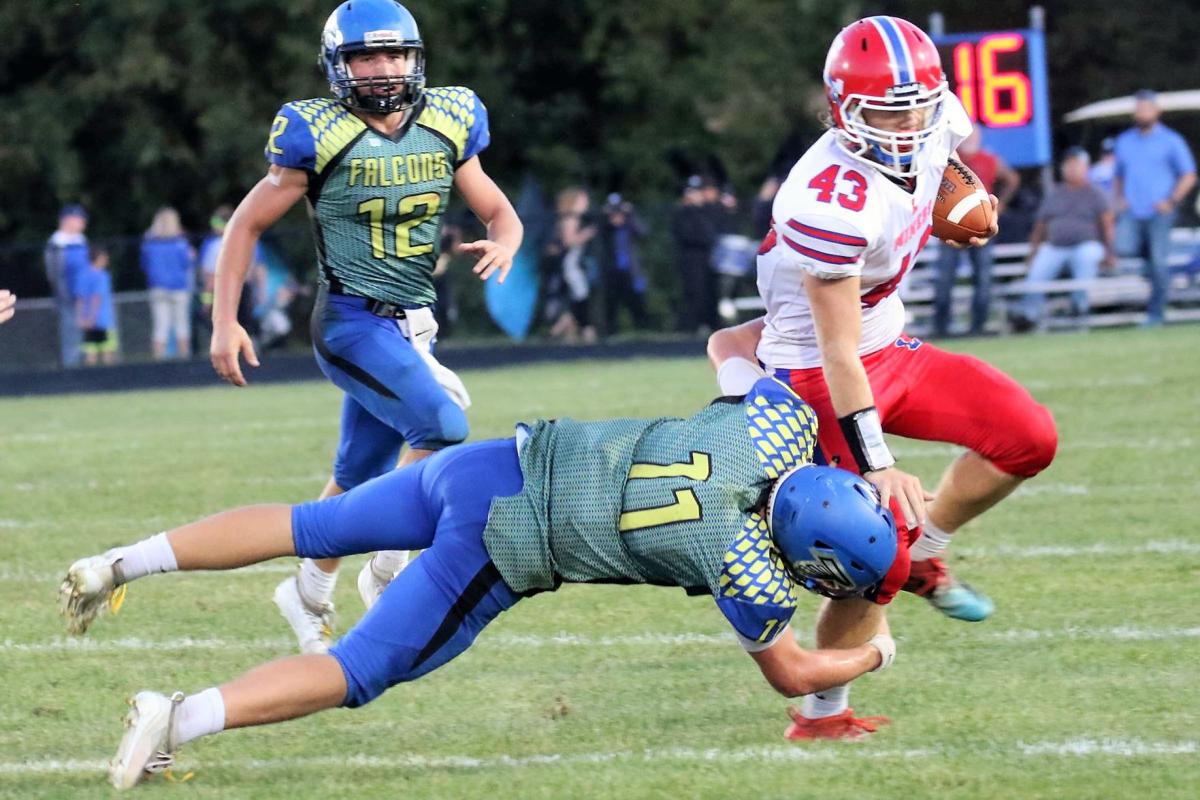 North Vermillion senior quarterback Brennan Ellis prepares to throw a pass in the second quarter of a Oct. 4 game against Parke Heritage. Ellis has directed to Falcons to an 11-1 record, a Wabash River Conference title and the IHSAA Class 1A Sectional 45 championship this season.

“I think it started when I was watching my dad and my older brother play Madden Football on the Xbox,’’ Ellis said. “It wasn’t long after that I started playing in the junior football program.’’

While Ellis admits the real thing is the best, he hasn’t stopped playing the sport on his computer games.

“I think I’m the best Madden player on this team, you can ask anyone,’’ Ellis quickly adds, admitting that the video game has helped him learn even more about the game.

“I’ve study football my whole life,’’ he said. “Right now, I love learning about run concepts. In Madden, I have the best run game that you can have. I like to understand the game and understand what is going on.’’

So, he’s a quarterback that likes running the ball more than passing?

“I love passing it as well,’’ he said. “I learned a lot about passing a few years ago, and now, I’m learning more about running.

“I want to know everything.’’

His thirst for knowledge helped him when he got high school football.

“Brennan is one of those guys that you don’t have to start from scratch with his mechanics,’’ said North Vermillion coach Brian Crabtree, who said last week that Ellis was his best throwing quarterback in his time at North Vermillion. “I’m not saying he is the best, because I’ve been very fortunate to coach some great quarterbacks here, but as far as passing the ball, he has all the tools that you look for in a quarterback.’’

But Ellis quickly admits that it wasn’t always that way for him.

“It seems like when I was a freshman, I threw three picks (interceptions) a game,’’ Ellis said. “Coach (Dwight) George helped me out with that, he also taught me that you can’t be haning your head over something that has already happened.

“I was determined to get better and I made sure to put in a lot of reps. I wanted to know everything like the back of my hand.’’

“Brennan has really studying the game a lot, and he understands what he should be doing at all times,’’ Little said. “His success doesn’t surprise me, because he was always a hard worker, but I didn’t know he would be as good at throwing the ball as he’s been.’’

This season, Ellis is completing 59 percent of his passes for around 2,200 yards and 27 touchdowns.

“I love being the guy that is at the head of this charge and one that runs this machine,’’ he said. “Being a part of North Vermillion football is all that I ever wanted to do when I was growing up.’’

His knowledge of this team and the game really paid off in last week’s sectional championship game against Parke Hertiage.

“I had confidence in my teammates that we were going to get it done,’’ said Ellis. “If I didn’t know this offense and this team so well, I don’t think I would have been as confident as I was in that situation.

“And it’s good knowing that the coaches also have confidence in us.’’

But, they still haven’t added his favorite play from Madden.

“My favorite play is the wham run,’’ he said.

Crabtree says that Ellis still has a little more to learn about run concepts.

So, what is the quarterback’s favorite play from the North Vermillion playbook.

“It would have to be the counter,’’ he said. “I love it when we get a team flowing one way and we are able to hit them with the counter.’’

“I want to be a chiropractor,’’ said Ellis, who is still weighing his college options.

And, he’s in no hurry to leave North Vermillion.

“These are the best times of my life, right now,’’ he said. “I know it is everything I thought it would be when I was younger.’’

Ellis and the North Vermillion Falcons will attempt to extend their football season this Friday night when they travel to Indianapolis to play the Lutheran Saints for the Regional Championship. Kickoff is set for 7:30 p.m (Eastern).

WESTVILLE - Sally A. Johnson, 102, formerly of Westville and Danville, passed away at 5:11 a.m. Saturday, January 18, 2020, at Gardenview Manor Nursing Home in Danville. She was born March 28, 1917, in Westville to Joseph and Theopillia Laurynites Bitaskey. She was preceded in death by four …