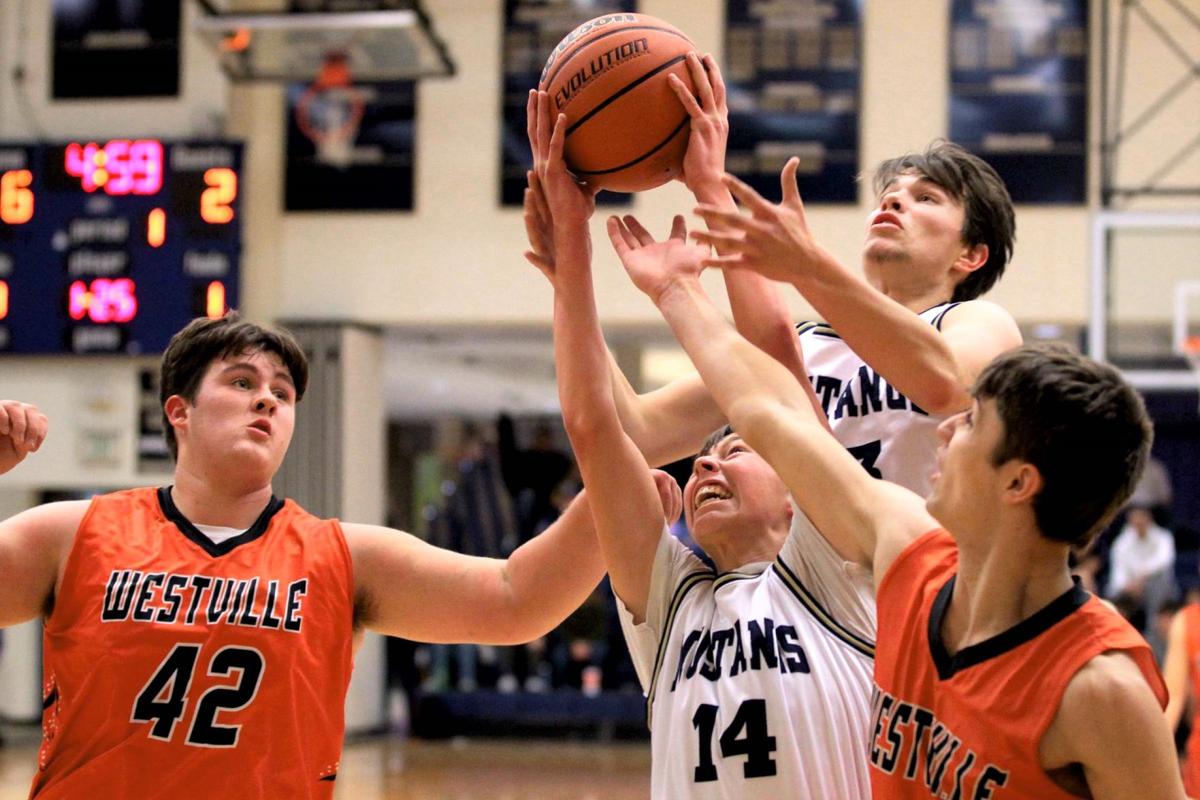 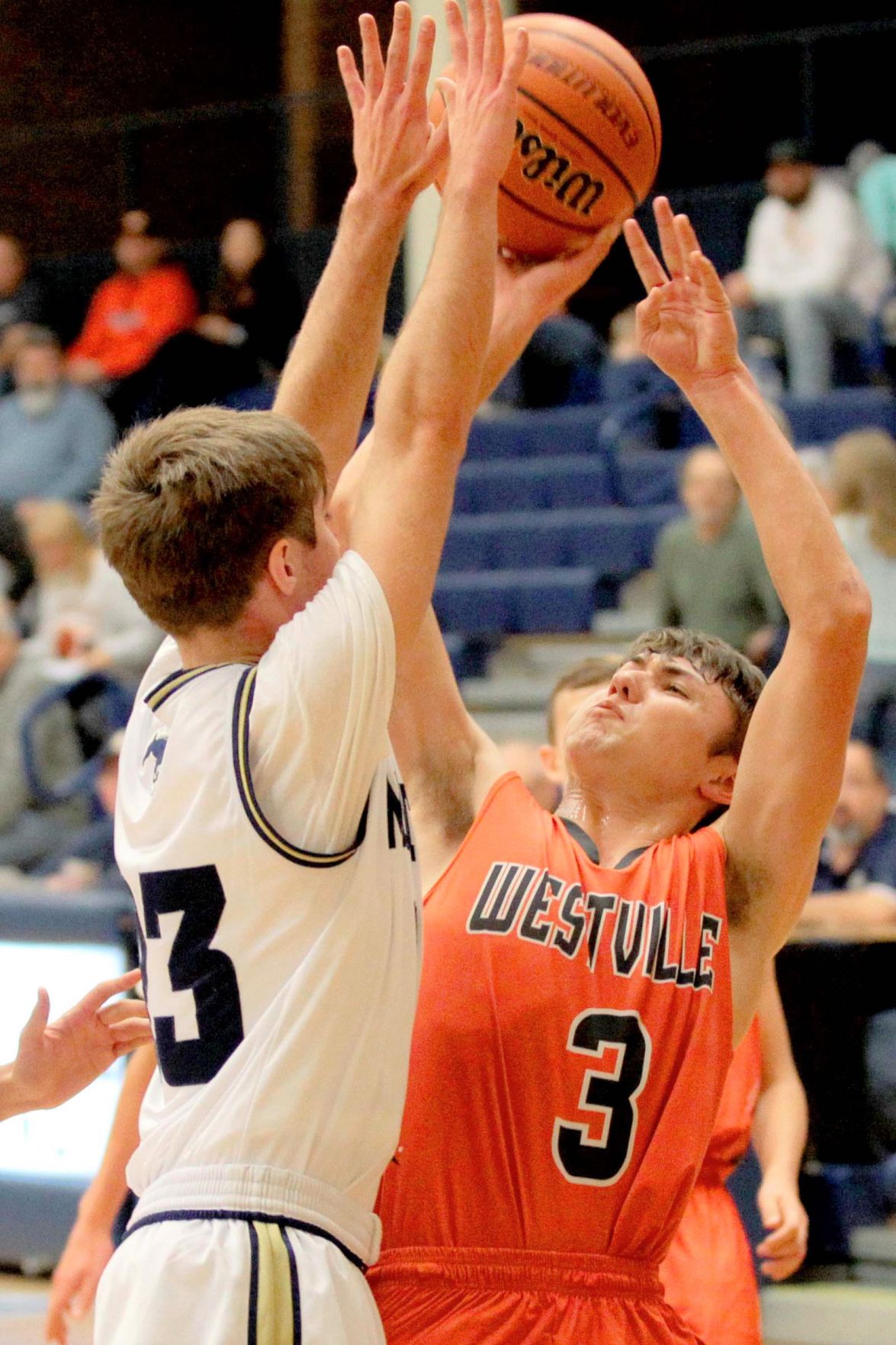 Raef Burke of Westville gets this short jumper over the fingertips of Colton Robinson of Fountain Central. Burke had 22 points for the Tigers.

Raef Burke of Westville gets this short jumper over the fingertips of Colton Robinson of Fountain Central. Burke had 22 points for the Tigers.

VEEDERSBURG, Ind. — It was a battle between two short-handed teams when Fountain Central hosted Westville in boys’ basketball on Friday.

According to Tigers’ head coach Joe Brazas, both teams had to make changes due to injuries.

“We were down three players and they were down two,” he explained. “We were playing a lot of sophomores and guys with no varsity experience.”

Brazas continued, “We play ‘Next man up,’ but it still makes a difference.”

The game could not have started better for his opponents as the Mustangs opened a 13-2 lead in the first four minutes in a run that included two three-pointers.

In the remainder of the quarter, Westville could only add three more points while Fountain Central scored nine more including two more treys for a 22-5 lead.

“We knew from scouting them at the Schlarman tournament that they liked to shoot a lot of 3’s,” Brazas said about the Mustangs, “and tonight they hit them.”

Fountain Central ended up making 11 3-pointers on the night against none for Westville.

The Mustangs were up 17 points going into the second quarter and the hosts continued to make shots from beyond the arc, pushing the margin up to 25 despite baskets from Bryce Burnett and Raef Burke for the Tigers.

The remainder of the second period saw lead stay near that 25-point mark as the Mustangs got baskets from Carson Eberly, Cody Linville and Colton Robinson against baskets by Burnett and free throws from Cole Maxwell and Luke Johnson.

At the half, thanks to a trey from Larkin, the Mustangs led 46-23. Fountain Central head coach Phil Shabi said his team came out from the start doing what he wanted.

“We got our own tempo,” he explained. “Our number one, two and three priority this week has been to get the ball up the floor quicker and we did that tonight much better than we did at Schlarman.”

Burke opened the third quarter for Westville with a putback, but Eberly countered with a three-pointer off a pass from Ray Duncan.

Burnett and Burke scored all the points in the third quarter for the Tigers while the Mustangs saw Eberly and Colton Robertson do the same.

When the period ended, the hosts had upped their halftime margin by a single point, to 24, at 57-33.

Carter Merryman hit a three-pointer to open the fourth period, the ninth such shot for the Mustangs in the contest and Denton Otero immediately followed with another for a 63-35 score.

The Tigers managed to put back-to-back baskets together as Maxwell took a steal the length of the floor and then Burnett made a lay-up, but Fountain Central got their 11th trey of the night from Luke Foxworthy to restore a 25-point margin.

Duncan added three points for the Mustangs late in the contest to make the final score 73-45.

“Maybe a positive from this game was that, with three guys out, we got nine or ten guys into the game, getting some good reps,” Brazas said. “We played hard and we’re going to continue to practice hard so that our young guys get better.”

For Shabi, the win and the play of his team showed that his squad had improved over their opening games in the Topper Classic at Schlarman Academy, but the statement came with a “but”.

“We have an unselfish group and they distributed the ball better and made better decisions,” he said, “but we’ve got a long way to go.”

Shabi continued, “One thing that helps us this year is that we have ten to twelve guys who we can mix up in practice rather than just playing against the JV. That should really help us get better.”