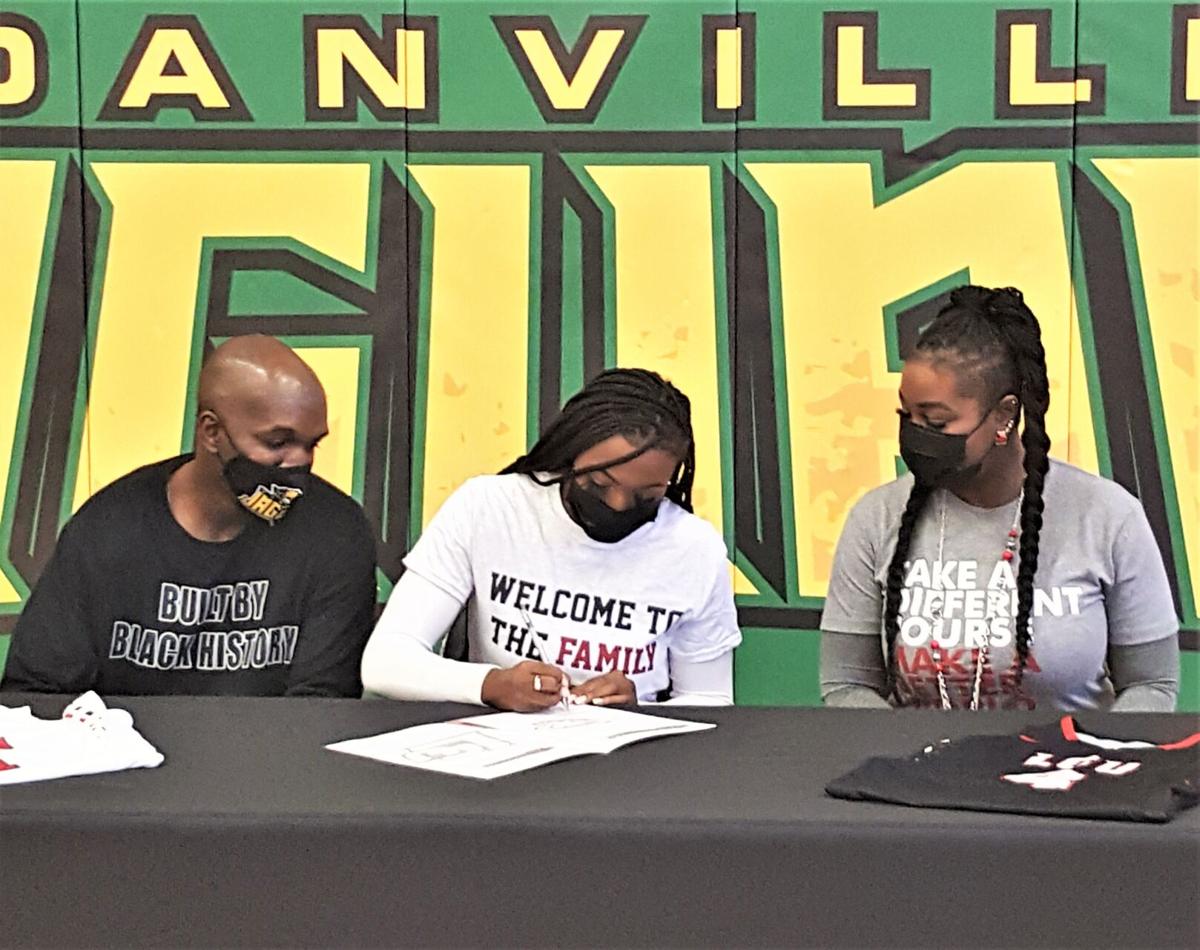 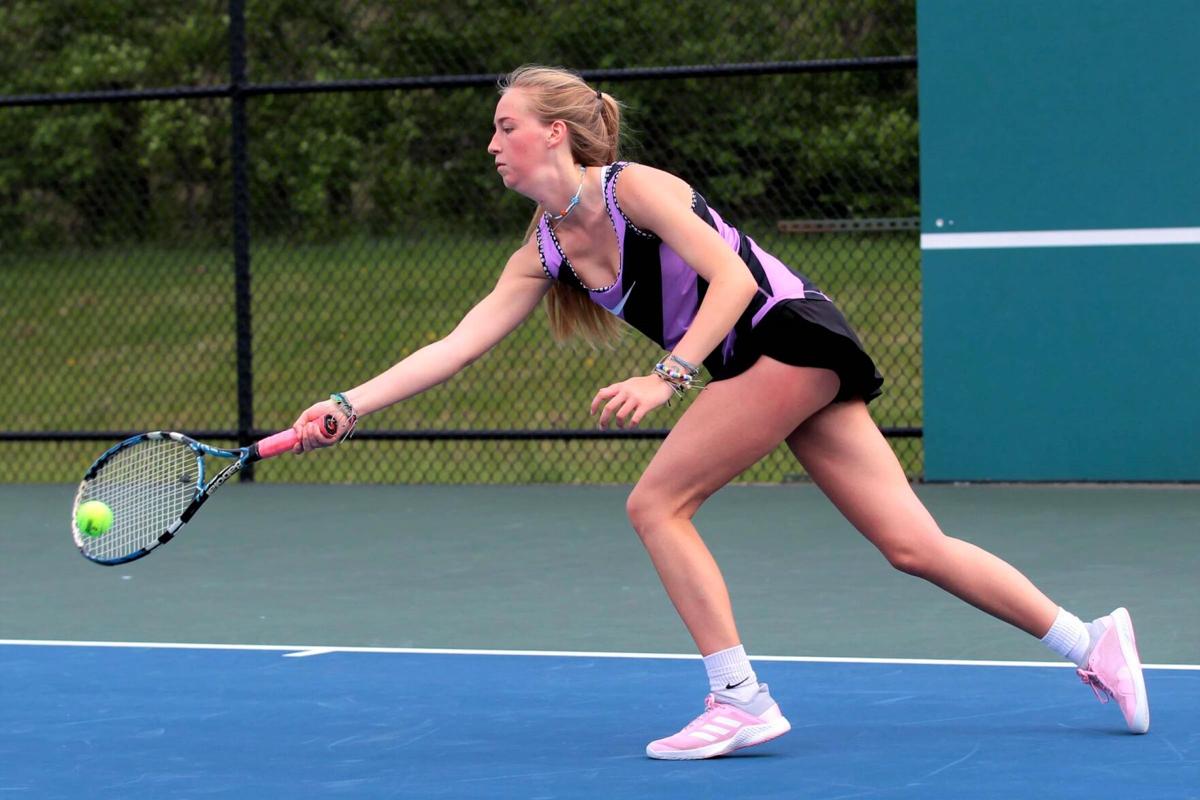 Nai’a Pettit of Covington runs to hit a forehand in her 2-singles match with Benton Central on Thursday.

Nai’a Pettit of Covington runs to hit a forehand in her 2-singles match with Benton Central on Thursday.

Robinson, who didn’t play high school basketball, averaged 3.5 points and 4.2 rebounds a game for the Lady Jaguars this past season.

Lincoln Christian University is an NAIA program in Lincoln and the Red Lions went 4-10 this past season.

Robinson thanked her parents, Durrell Robinson and Selisha Bell, for their support along with DACC women’s basketball coach Erika Harris for the opportunity.

TILTON — The Danville baseball team saw themselves down twice against Bloomington, but was able to rally and get the 9-6 win on Friday.

Cameron Feuerborn had two RBIs for the Vikings, while Tevin Smith had a RBI and Dylan Brown had four hits.

Payton Young got the win with five strikeouts on the mound for Danville, who will play Peoria Notre Dame on Tuesday.

POTOMAC — With five ruins in the fourth inning, the Tigers took the lead and were able to hang on for the win against the Trojans/

Drew Wichtowski had three hits and three RBIs for Westville, while Bryce Burnett and Gage Lange each had one RBI and Zach Russell had two hits.

Austin Rosenberger had two RBIs for Armstrong-Potomac, while Nathan Rogers, Gavin Parkerson and Jayce Townsend each had one RBI.

BISMARCK — The Blue Devils only had two hits as they lost to the Panthers.

Ada Ray and Anthony Jordan each had an RBI for Bismarck-Henning/Rossville-Alvin, while Rance Bryant and Tuff Elson each had a hit.

The Blue Devils started the season on Thursday with a 7-5 loss to Champaign Central. Tuff Elson had two-run home run for the Blue Devils, while Dawson Dodd and Brody Sexton each had two hits and a RBI, Anthony Jordan had a RBI and Rance Bryant had two hits.

The Blue Devils will travel to Armstrong-Potomac on Monday.

VEEDERSBURG, Ind. — Carson Eberly had the lone RBI for the Mustangs as they lost to Lebanon in five innings.

The Trojans were coming off a 3-2 win over Covington on Thursday.

Owen Acton had two RBIs for the Mustangs in the win, while CJ Yager had a RBI and Luke Foxworthy had two hits.

Losing pitcher Dane Gerling had a RBI for Covington, while Trace Hammer and Jordan Inman each had two hits.

CLINTON, Ind. — The Seeger baseball team broke a 1-1 tie with three runs in the sixth and would go on to beat South Vermillion 8-1 on Thursday.

Cade Walker hit a grand slam for the Patriots, while Jameson Sprague, Caleb Edwards and Jace Ware each had a RBI, Nate Hennessey had three hits and Nathan Smith had two hits.

Nick Turner had six strikeouts on the mound and only gave up three hits.

WESTVILLE — Abby Sabalaskey had 17 strikeouts and gave up only one hit as the Tigers shut out the Warriors.

Desi Darnell had two hits and a RBI for Westville, while Ariel Clarkston, Rylee Jones and Aubrie Jenkins each had one RBI and Sabalaskey and Halle Douglas each had two hits.

The Tigers rebounded from a 11-1 loss to Champaign Centennial on Thursday. Halle Douglas had two hits and scored the only run for the Tigers, while Darnell had two strikeouts on the mound.

VEEDERSBURG, Ind. — The Mustangs could not get anything going against North Putnam at home.

Marley Massey had two doubles for Fountain Central, while Chloe Golia had the lone RBI.

ARMSTRONG — Tiffany Paris had five hits, but the Oakwood softball team lost 16-12 to Armstrong-Potomac on Thursday.

Errors were the major key for the Trojans, who errors led to five runs in the bottom of the fifth, and would score the winning run on a bases-loaded walk.

Kyla Bullington got the win on the mound for Armstrong-Potomac, while getting four hits.

DUGGER, Ind. — The North Vermillion softball team scored two runs in the top of the seventh to take the lead for good in a 6-4 win over Dugger Union on Thursday.

Emily Fitzwater had nine strikeouts to get the win on the mound, while Bailey got the final out on a strikeout.

COVINGTON, Ind. — With doubles wins by the teams of Karsyn Engle and Emma Taylor and Cora Reynolds and Daisy Goeppner, the Covington girls tennis team beat Benton Central 4-1 on Thursday.

Grace Wright and Nai’a Pettit each had singles wins for the Trojans, who are 7-1.

DANVILLE — The Danville High School track teams started the season on Thursday with a meet with Normal Community, Champaign Centennial, Bloomington and Bismarck-Henning/Rossville-Alvin.

In the boys meet, Bloomington won with 140 points, while Normal was second at 125, Centennial was third at 116, Danville took fourth at 68 and BHRA was fifth at 59.

In the girls meet, Normal won the team title with 186, while Centennial was second at 106, Danville was third at 100 and BHRA took fourth at 74.

MONTICELLO — The Bismarck-Henning/Rossville-Alvin/Armstrong-Potomac wrestling team started the season with 54-24 losses to Monticello and Oakwood/Salt Fork.

Against the Comets, Gada Bryant (106 pounds) and Robert Brumfield (285) each won by pin for the Blue devils, while Brendan Whitney (113) and Ayden Golden (120) won by forfeit.

Whitney, Issac Tabels (132) and Braxton Wilson (220) won by pin against Monticello, while Golden won by forfeit.

King named to Hall of Fame

King has an 184-141 overall record at Seeger, North Putnam, South Decatur and Rockville in his 30 years which includes leading Rockville to a IHSAA Class 1A state runner-up finish in 2007.

This past season, he led the Patriots to an 8-3 record and lost in the sectional finals to eventual state champion Western Boone.

CHAMPAIGN — For the second time in April, Oakwood native and Illinois runner Jon Davis was named Men’s Track Athlete of the Week on Wednesday by the Big Ten.

Davis won the 1,500 meter run at the Fighting Illini Big Ten Relays with a personal-best time of 3 minutes, 39.85 seconds, which is first in the Big Ten this season and third best in program history.

EAST PEORIA — The Danville Area Community College softball team had two tough losses on Thursday, losing 10-7 in the first game and 6-3 in the second to Illinois Central College.

In the first game, the Cougars took a 7-0 lead in the third inning and withstood an six-run fifth inning from the Lady Jaguars that made the score 8-7.

In the second game, the Lady Jaguars tied the game at 3-3 in the third inning, but the Cougars scored three of their own in the bottom of the inning to clinch the win.

Natalie Shuey had two hits with a home run and two RBIs, while Redman had one RBI.

The Lady Jaguars will try to regroup Friday against Lincoln Land.