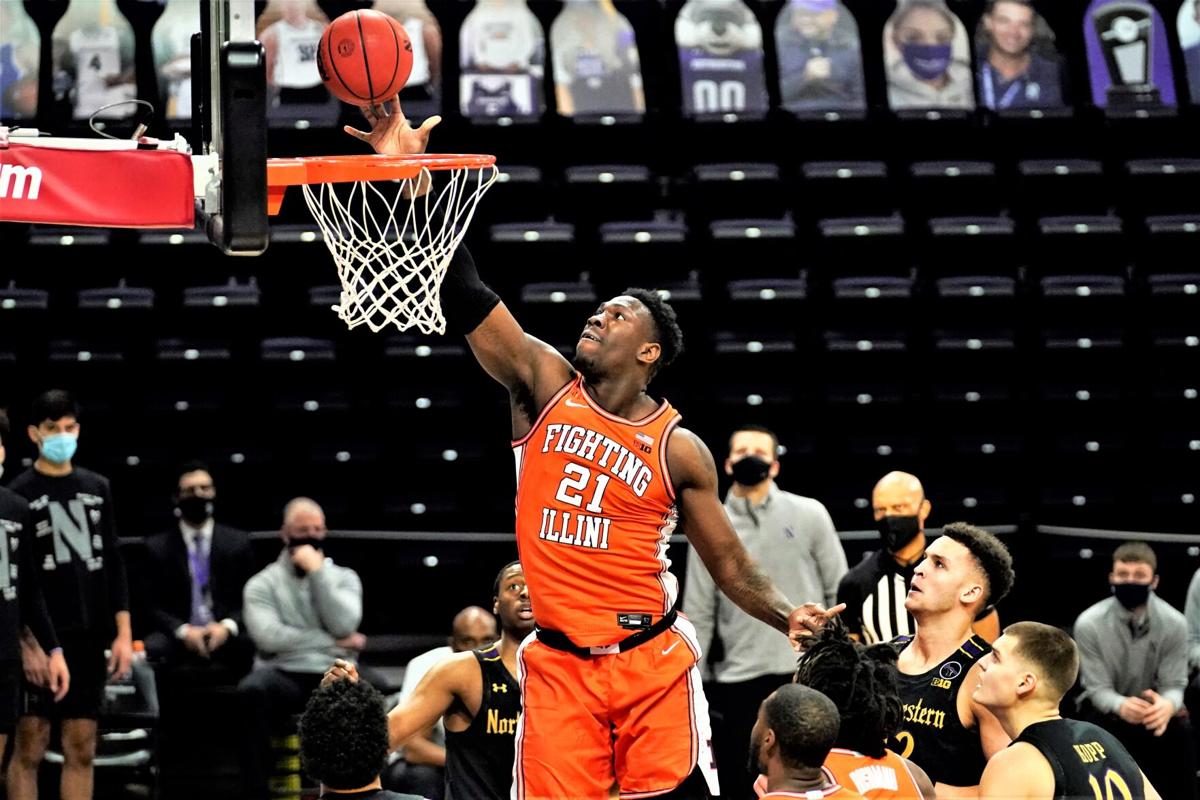 Illinois sophomore center Kofi Cockburn shoots an uncontested layup in the first half against Northwestern at Welsh-Ryan Arena in Evanston. Cockburn had 18 points and 12 rebounds as the Fighting Illini rallied to beat the Wildcats 81-56 in a Big Ten Conference contest. 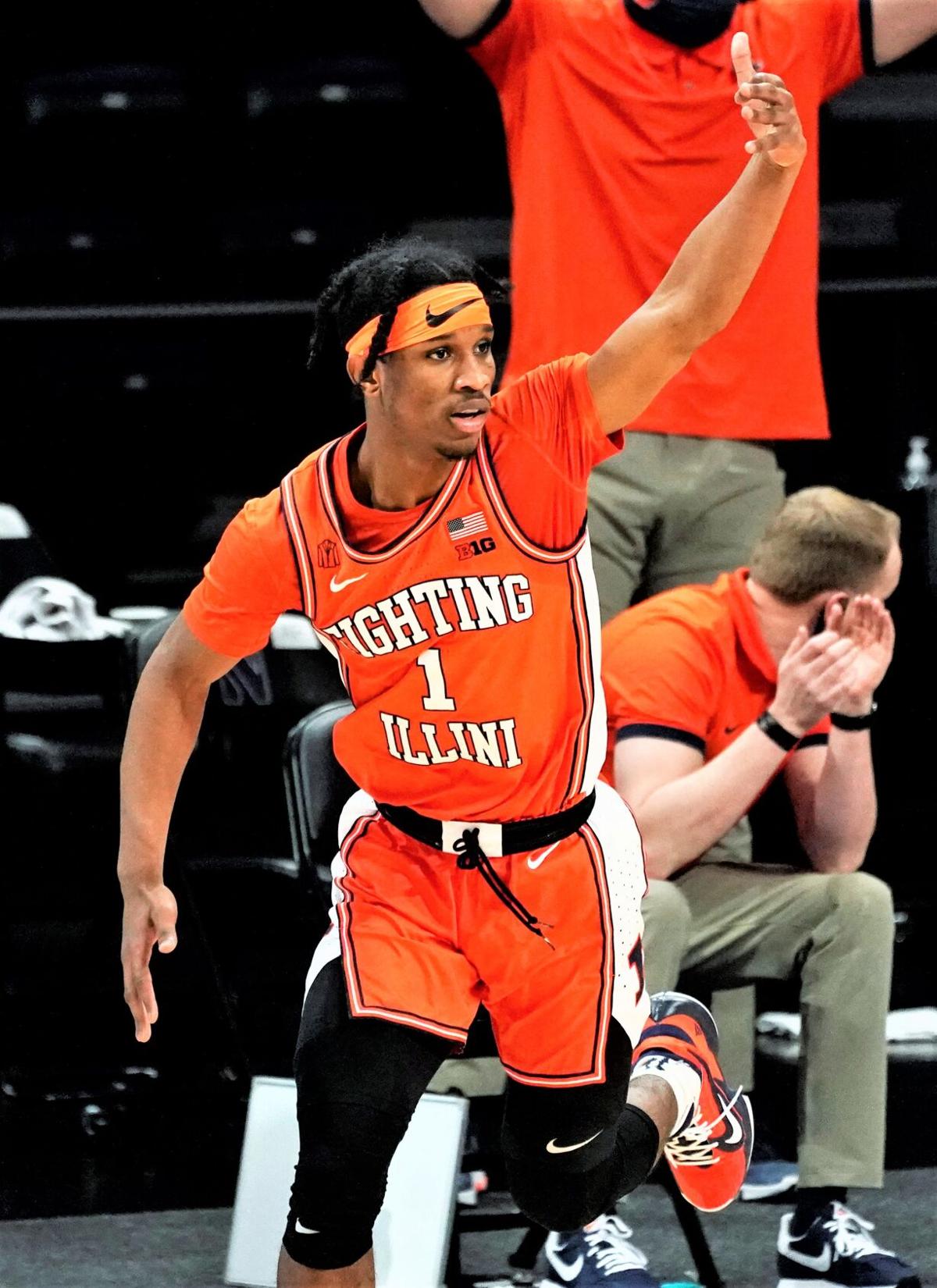 Illinois guard Trent Frazier reacts after making a 3-pointer during the second half of Thursday’s game against Northwestern in Evanston. 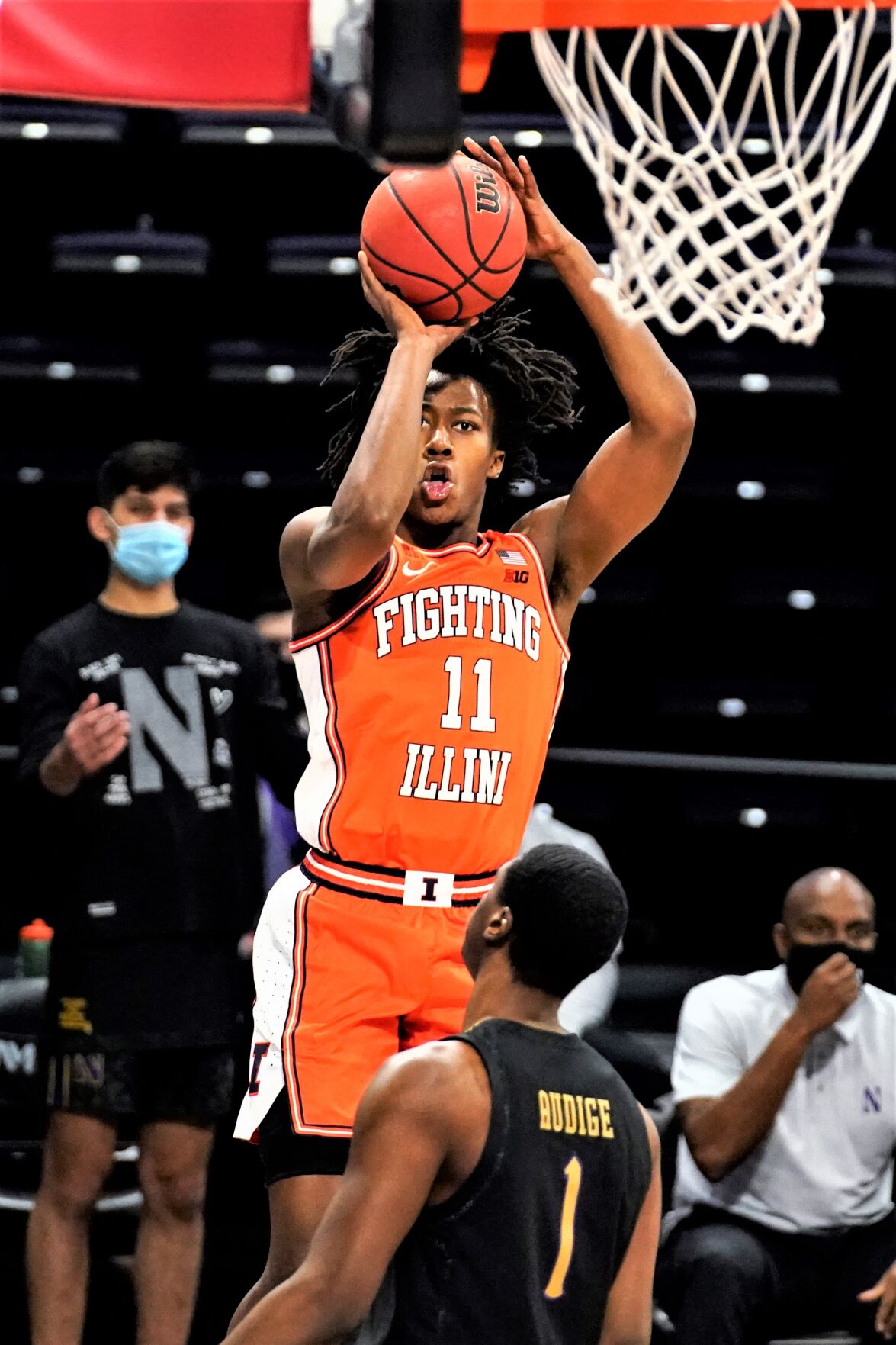 Illinois sophomore center Kofi Cockburn shoots an uncontested layup in the first half against Northwestern at Welsh-Ryan Arena in Evanston. Cockburn had 18 points and 12 rebounds as the Fighting Illini rallied to beat the Wildcats 81-56 in a Big Ten Conference contest.

Illinois guard Trent Frazier reacts after making a 3-pointer during the second half of Thursday’s game against Northwestern in Evanston.

EVANSTON — Being the biggest has it advantages in a dogfight.

After taking several punches from Northwestern in the first half, Illinois challenged 7-foot, 285-pound center Kofi Cockburn to provide a few blows of his own.

Cockburn responded with a double-double in the second half alone. The sophomore scored 13 points and pulled down 10 rebounds as the Fighting Illini turned a 15-point halftime deficit (43-28) into a 81-56 victory over the Wildcats at Welsh-Ryan Arena.

“We got punched and we got knocked down,’’ said Cockburn, who had his eighth double-double of the season with 18 points and 12 rebounds. “But we got back up and we fought back. We ended up dominating.’’

Evident by the fact that Cockburn’s points in the second half were the same as the entire Northwestern team had in the game’s final 20 minutes.

“I’ve been doing this for a long time, I don’t know if I’ve seen anything quite like that game,’’ said Illinois coach Brad Underwood, whose team in the only NCAA Division I program to trail by 15 or more points at halftime and then win by 20 points, according to Stats Perform.

“The thing I love about Kofi, I can really challenge him,’’ Underwood said. “My expectation for him is much higher than it is for himself. I’m never going to let him be satisfied with anything. He does some great things, but Kofi’s potential is untapped. He is so receptive to coaching, he wants coaching.

“He knows I wasn’t happy in the first half.’’

What exactly was Underwood unhappy about in the first half from Cockburn?

“I was kind of playing with low energy in the first half. I wasn’t doing what I was supposed to do and what the team needed me to do,’’ said Cockburn, who had 5 points and two rebounds in the first half. “He got on me and stressed that I needed to come out and play with energy.

Not all players would have responded so well to the constructive criticism from their coach.

“I knew what I was signing up when I came to Illinois,’’ Cockburn said. “Coach expects great things from me. He knows that I’m capable of great things. It’s always good to have a coach pushing pass your limits.

“We don’t settle for mediocre.’’

According to both Underwood and Cockburn, that first half for the 12th-rated Fighting Illini (9-3 overall, 5-1 in the Big Ten) was less than mediocre.

“That first half was horrible, both defensively and offensively,’’ Cockburn said.

On the other side, the Wildcats, who have now lost three straight, couldn’t have asked for a better situation in the game’s first 20 minutes.

“I felt we had a lot of momentum in the first half. We had the energy and we had the life,’’ said Northwestern coach Chris Collins. “They hit us with that spurt to start the second half. You felt the energy shift and it gave them life. Then you really heard their bench and you heard their energy.’’

Illinois opened the second half with an 8-0 run, which became part of a 30-5 run in which the Fighting Illini took the lead for good at 49-48 on a short jumper from Cockburn with 12 minutes, 30 seconds left.

“The first couple of stops that we got in the second half. I think those were big confidence builders, because we converted on the offensive end,’’ Cockburn said. “It’s always good to get momentum from the defensive end.’’

Cockburn added that defense was the difference between the first half and the second half.

The Wildcats made just 2-of-24 shots (8.3 percent) in the second half and they had nine turnovers that led to 15 points for the Illini.

“Once we lost our lead, we lost our poise,’’ Collins said. “We were just never able to get back into the game.’’

Thursday’s game was the second straight Big Ten road game in which Illinois overcame a 15-point deficit in the first half as the Illini also accomplished this feat in their 98-81 victory over the Penn State Nittany Lions on Dec. 23, 2020.

“It’s not only physical strength but mental toughness,’’ Cockburn said. “We are a team, we don’t keep our heads down. When you have confidence in yourself and your teammates — nothing really holds you down.

“We took a couple of punches, but we are going punch back and stay in the fight. That’s what we do.’’

Joining Cockburn in double figures for the Illini was junior guard Ayo Dosunmu with 15, while senior guard Trent Frazier and freshman guard Adam Miller, each chipped in with 14.

Robbie Beran was the only player in double digits for Northwestern with 11, while leading scorer Miller Kopp was held to eight.

Up next for Illinois is a 7 p.m. home game at the State Farm Center against the Maryland Terrapins, who lost at home to the Iowa Hawkeyes, 89-67, on Thursday night.