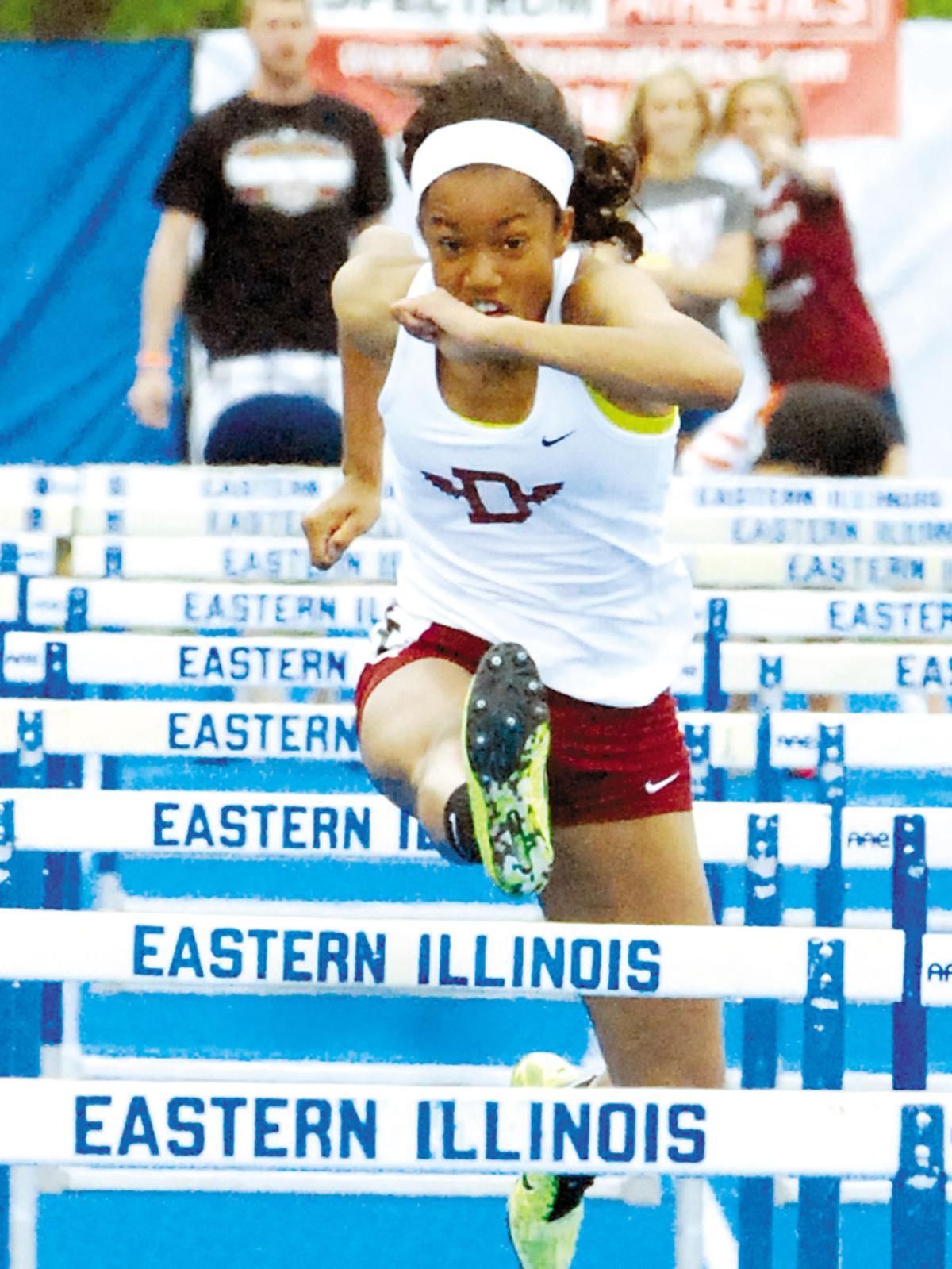 Danville senior Alexus Jimson-Miller clears the eighth hurdle en route to winning her heat of the 100-meter hurdles event during Friday's IHSA Class 3A State Track Meet at O'Brien Stadium in Charleston. Jimson-Miller's time of 14.43 seconds was the fastest in Friday's prelims. 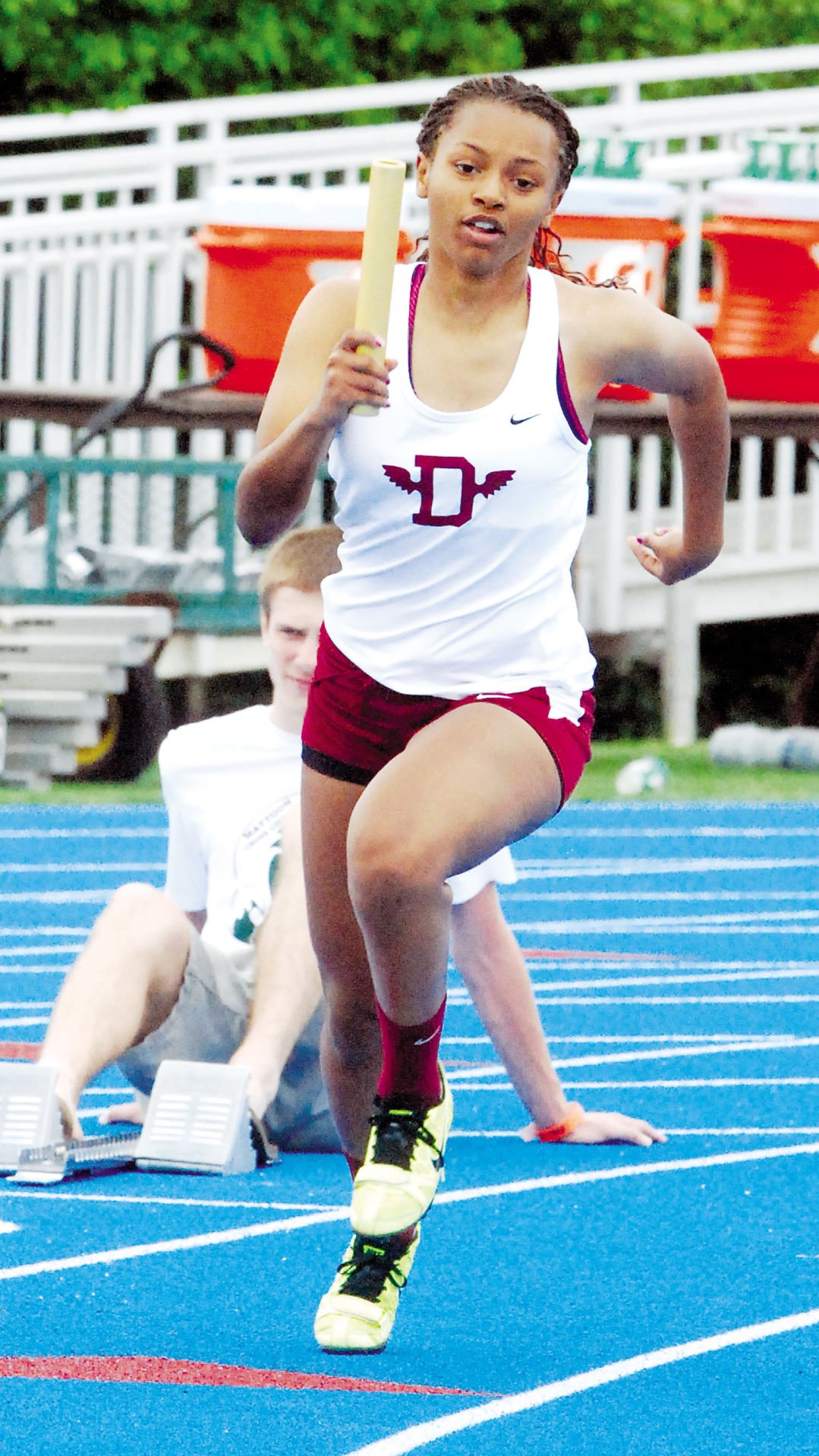 Danville sophomore Michaela Jones blasts out of the starting blocks in the 400-meter relay during Friday's IHSA Class 3A State Track Meet at O'Brien Stadium in Charleston. Jones and her Viking teammates in the relay broke their own school record with a time of 48. 21 seconds.

Danville senior Alexus Jimson-Miller clears the eighth hurdle en route to winning her heat of the 100-meter hurdles event during Friday's IHSA Class 3A State Track Meet at O'Brien Stadium in Charleston. Jimson-Miller's time of 14.43 seconds was the fastest in Friday's prelims.

Danville sophomore Michaela Jones blasts out of the starting blocks in the 400-meter relay during Friday's IHSA Class 3A State Track Meet at O'Brien Stadium in Charleston. Jones and her Viking teammates in the relay broke their own school record with a time of 48. 21 seconds.

A year ago, Jimson-Miller was well on her way to a state placing in the 100-meter hurdles when she clipped the sixth hurdle. The subsequent fall cost her any chance of reaching the finals.

And while the senior described it as one of the worst feelings in the world, she turned it into a motivation for this year’s state meet.

On Friday afternoon at O’Brien Stadium, Jimson-Miller once again exploded out of the blocks and this time, she cruised to a heat victory and the fastest time (14.42 seconds) of any runner in the prelims.

“It wasn’t hard at all — the fall last year wasn’t on my mind at all,’’ Jimson-Miller said. “Last year, things happen. This year I was ready.’’

According to Jimson-Miller, that philosophy of moving on is something she strives for in every day life.

“You can ask any of my friends, I can’t stay mad at anyone or anything for very long,’’ she said. “I’ve been good at put things behind me and then going out and getting what I want.’’

And what she wanted on Friday was to show everyone in the state her ability at running both the 100 and 300 hurdle races.

“Not everyone on the state-wide stage has gotten to see me run in my career,’’ said Jimson-Miller, whose time of 14.15 seconds at Springfield Southeast Invitational on April 6th is still the fastest in Class 3A. “For those people that haven‘t seen me, there might be an expectation for me not to do well, because they didn’t get to see me last year.

“Today, I got out and ran well. I showed people what I can do.’’

Actually, the crowd at O’Brien Stadium didn’t really get to see Jimson-Miller at her best.

She admittedly relaxed on the final few hurdles of both races.

“I think I got out really well and I was comfortable with the race,’’ she said after winning her heat by .28 seconds.

In her 300 hurdles race, Jimson-Miller’s time of 44.01 seconds was the second fastest of the prelims, behind Breanna Detra of Peoria Richwoods, but Jimson-Miller won her heat by .62 seconds.

“I’m really proud of what I did today,’’ she said. “This was my last race of the day, so I knew I had to finish strong.

That should stand as a challenge to the rest of the field in the hurdle races.

Jimson-Miller, who has signed to run track next year at Miami of Ohio is going for the first state championship since Destiny Carter won the 400 in the 2010.

And just like she did on Friday, Jimson-Miller will start her day running the second leg on Danville’s 400-meter relay.

For the second time in as many races, the group of Michaela Jones, Jimson-Miller, Ambrosia Williams and Emone Davis set a school record.

“Everyone is just getting faster,’’ Jimson-Miller said. “We are kind of young, but it’s starting to click with our team.’’

Jimson-Miller is the only senior on the group, but Jorriel Stewart had been the team’s leadoff runner until suffering a hamstring injury at the Big 12 Meet.

“It definitely hurts seeing Jorriel up there in the stands,’’ Jimson-Miller said.

But, her injury has served as motivation for the team.

“It was pretty devasting seeing her go down a couple weeks ago.’’

But, how did the Vikings find a replacement that could fill into her spot.

“We have a good variety of teammates, everyone can run the race,’’ Williams said. “Her injury was tough, but we knew it wasn’t the end. We took that loss as a motivation.’’

Stewart admitted it’s been tough seeing her team run at last week’s sectional meet and at the state meet on Friday.

“I wish I was running with them,’’ she said. “But, I’m really proud that they made the finals for me.

“I started it this season and they have picked it up from where I left it off.’’

Taking off the leadoff leg for Danville has been sophomore Michaela Jones.

“I’ve been working on my starts a lot in the past two weeks, because I didn’t have to do very many before Jorriel’s injury,’’ she said. “All year this is all we’ve talked about, getting to state together.

“Hopefully, we can come home with a medal.’’

Danville finished second in its heat and the Vikings time of 48.21 seconds was the fifth fastest in the prelims.

“Our handoffs could have been a lot better,’’ Jones said. “I think it might have cost us the win in the heat.’’

Williams said that was something the Vikings were going to work on before today’s finals.

In addition to the relay and Jimson-Miller two hurdle events, Danville freshman Sadie Elliott will also run in the finals of 3,200 on Saturday.

Brittany Issac, another freshman, failed to qualify for the finals in the discus event.

Dr. Kimila Sue Caslow Brown, 62, passed away on Wednesday, January 5, 2022. She was born on October 5th, 1959 in Iowa City, Iowa to parents Dean and Patricia (Flynn) Caslow. She married Rick Brown in Danville, Illinois. To this union 3 children were born, Brittany, Dane. and Jordan.They surv…

Janice Franklin Sloan, of Danville, passed away on January 15, 2022 surrounded by her loving family. She was 85 years old. She is survived by her husband of sixty-four years, James Joseph ("JJ") Sloan, and by their six children: Suzanne (Morey-Sloan); Colleen (Jones), Michael, Gregory, Thoma…