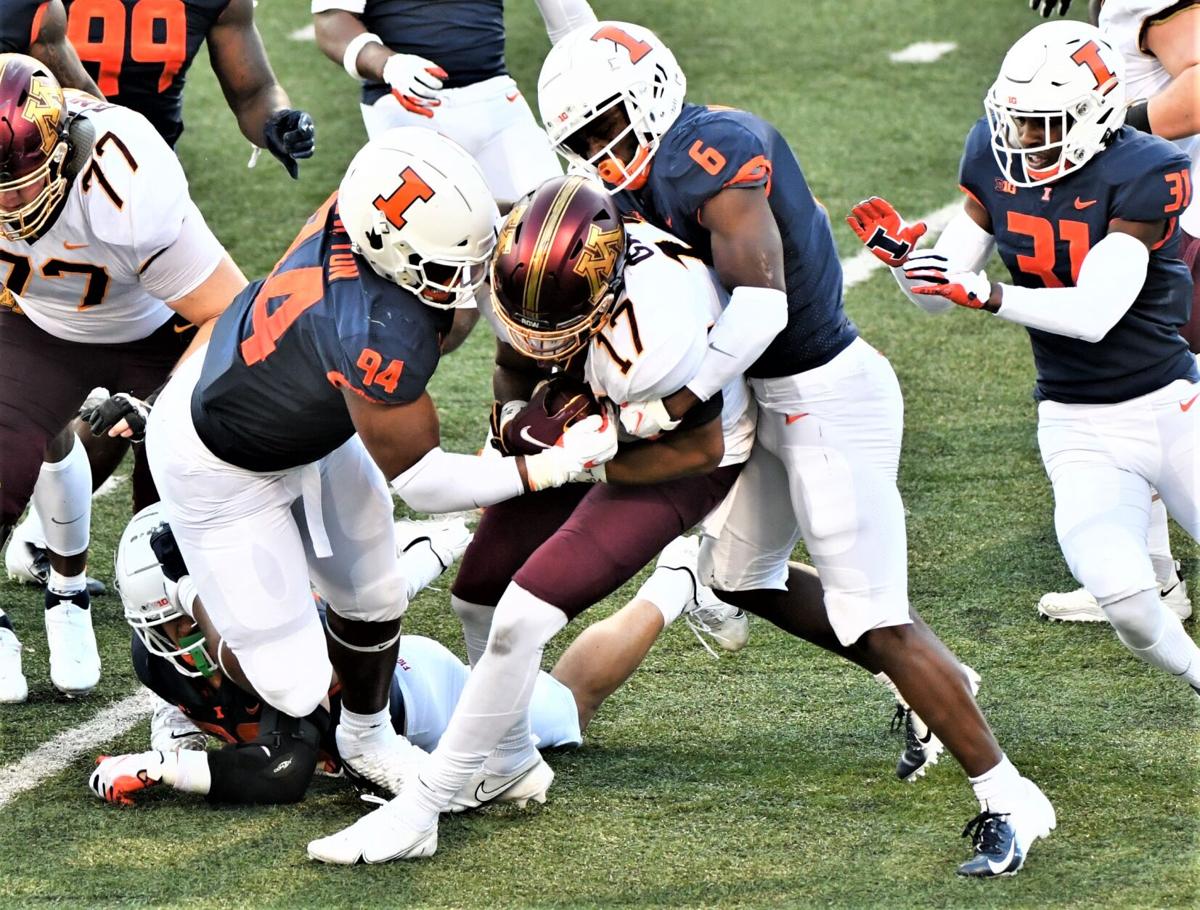 Illinois defensive tackle Jer’Zhan Newton, left, and defensive back Tony Adams, right, combine to tackle Minnesota wide receiver Seth Green during a Big Ten Conference game on Nov. 7 at Memorial Stadium. The Illini defense, which ranks 13th in the Big Ten for total defense and 14th in scoring defense, will need to play better today as Illinois seeks its first win of 2020. 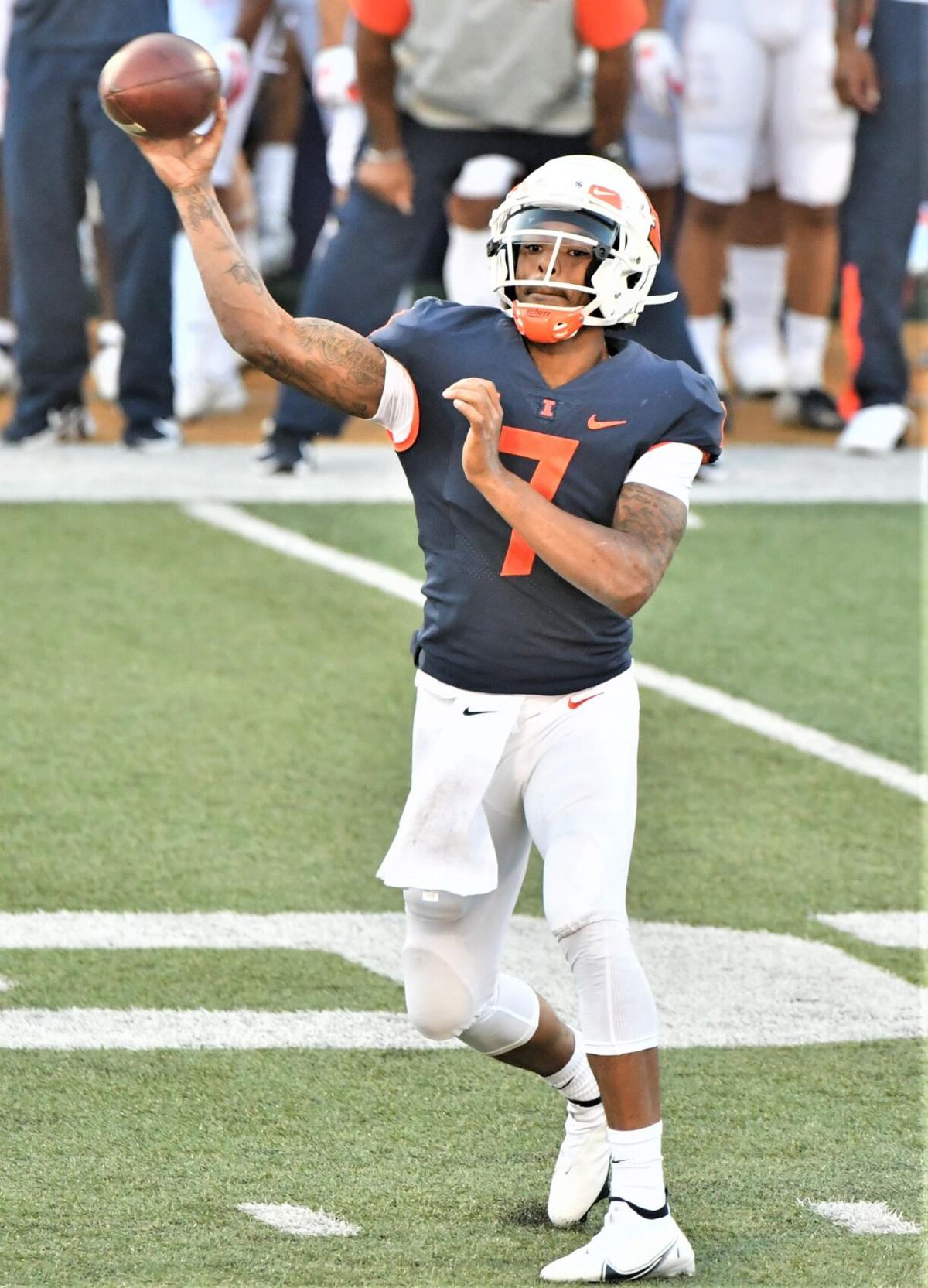 Illinois sophomore quarterback Coran Taylor attempts a pass during the Nov. 7 game with Minnesota. Taylor made his first collegiate start against the Gophers last week.

Illinois defensive tackle Jer’Zhan Newton, left, and defensive back Tony Adams, right, combine to tackle Minnesota wide receiver Seth Green during a Big Ten Conference game on Nov. 7 at Memorial Stadium. The Illini defense, which ranks 13th in the Big Ten for total defense and 14th in scoring defense, will need to play better today as Illinois seeks its first win of 2020.

Illinois sophomore quarterback Coran Taylor attempts a pass during the Nov. 7 game with Minnesota. Taylor made his first collegiate start against the Gophers last week.

Smith came into his fifth season with high expectations, calling the 2020 edition his best but after three games, the Fighting Illini have been outscored 117-45 and Illinois has never had a lead in anyone of the first three contests.

“The expectations we had, I think we had them for a reason,’’ said Smith as Illinois returned 15 starters and has 25 seniors on it roster.

But don’t for a second think that Smith is going to panic over losses to Wisconsin, Purdue and Minnesota.

“Do I look like a guy that is going to panic?’’ he said. “We are disappointed in three games that we have played, and we need to play better in this fourth game.

“There is a lot of football games to go.’’

That fourth game for Illinois is at noon today against the Rutgers Scarlet Knights, who are 1-2 in their first season with their former coach Greg Schiano, who was 68-67 from 2001-2011.

And for the first time since 2014, Rutgers is a favorite in a Big Ten Conference contest.

“We are underdogs again and I see why,’’ Smith admitted. “It’s about us playing our best ball and we haven’t done that. That’s why we are anxious to practice this week and put a better product on the football field this weekend.’’

Illinois is not only looking for its first win of this season but the Illini, who have won the last two meeting with the Scarlet Knights, are trying to bounce back from a 41-14 loss at home to the Minnesota Golden Gophers.

“I don’t have a whole lot of answers for why we played that way,’’ Smith said. “But when you don’t play the way you should, you evaluate the video, which we’ve done several times, you make the necessary corrections that you need to make, and you start getting ready for a Rutgers team that is probably anxious to play us.’’

But according to Smith, Rutgers is going to see a different team today.

“When you play the way we played this past Saturday, you can’t continue on that same path,’’ Smith said. “You have to make changes. So we need to shake some things up a little bit and play a lot better.’’

One of the biggest changes for Illinois this week will be its personnel.

Starting quarterback Brandon Peters will be still be out because of a positive COVID-19 test back in October, but the players like center Doug Kramer Jr., kicker James McCourt, freshman quarterback Isaiah Williams and defensive lineman Keith Randolph are expected to return for today’s game.

“I know that we are a better football team with them,’’ Smith said. “We can’t wait to get them all back.’’

So, with Williams back will Illinois still go with former Peoria High standout Coran Taylor at quarterback this week?

“We have an idea of who will start at ever position, but you still go through practice,’’ said Smith, not revealing his plans. “We didn’t just start practicing yesterday, it may seem that way with the way we played last weekend, but we have had a chance to see all of our players.

“When we have the entire group together, we have an idea of how it will play out.’’

Smith says have Kramer back at center will allow Kendrick Green to shift back to his guard position.

“It starts with your center. It’s different when he is not there,’’ Smith said. “Doug settles everyone in. When you haven’t played your best ball, you want see a little bit of a change. Getting our line back in their positions should help.’’

But Illinois doesn’t just need to make improvements on the offensive side of the ball.

The Illini defense is last in the conference in points allowed (39.0 per game) and they are 13th in total defense allowing 480.0 yards per contest.

“Three games into the season, that’s normally when you see exactly who you are, what you need to do going forward, who you really need to go with. We are at that stage,’’ Smith said. “We need to play our best football starting this week and I think we will.’’

Illinois is 0-3 for the first time since 1997 when the Fighting Illini went 0-11 under coach Ron Turner.

Today’s game is slated for a noon kickoff and the game can be seen on the Big Ten Network. It can also be heard on the Busey Bank Illini Sports Network including Danville stations WDAN-AM 1490 and WDNL-FM 102.1.