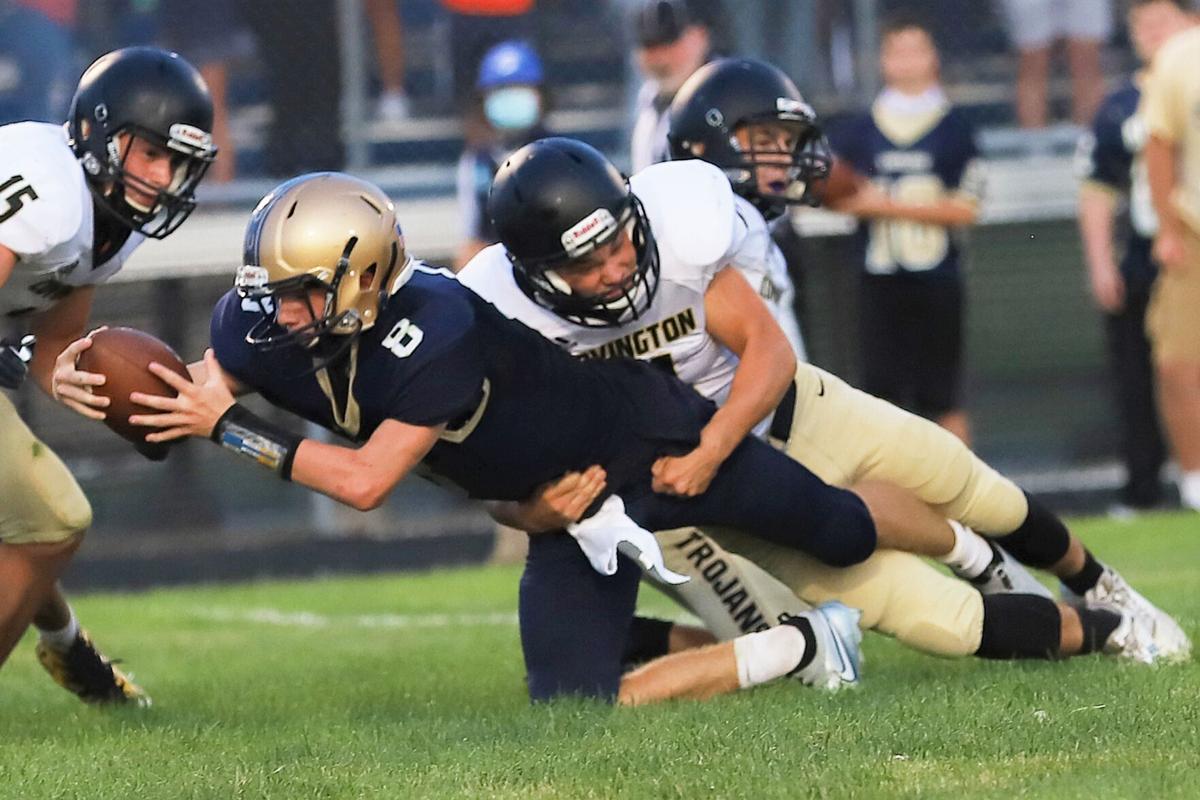 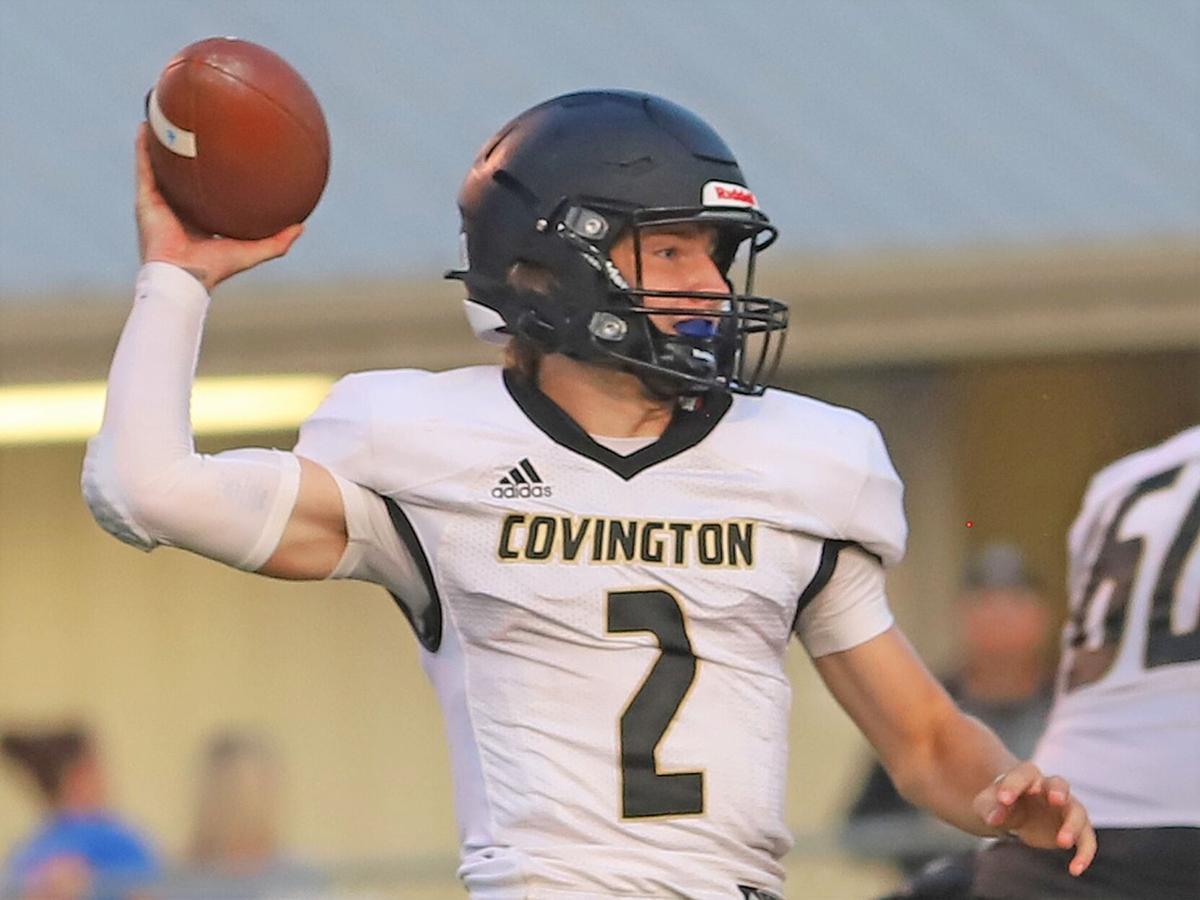 Covington junior quarterback Alan Karrfalt looks for an open receiver during the first half of Friday’s game against Fountain Central. Karrfalt completed 34 of 43 passes for 403 yards and five scores in the Trojans victory.

Covington junior quarterback Alan Karrfalt looks for an open receiver during the first half of Friday’s game against Fountain Central. Karrfalt completed 34 of 43 passes for 403 yards and five scores in the Trojans victory.

VEEDERSBURG, Ind. — Turnovers and goal-line stands are momentum changers in the game of football.

For the second week in a row, the Covington defense came up huge right before halftime and it propelled the Trojans to a 42-14 triumph over the Fountain Central Mustangs.

Last week against North Vermillion, it was an interception return for a score by Duncan Keller. On Friday night, Covington’s defense spearheaded by junior linebacker Neil Ellmore stopped Fountain Central on four plays inside the 10-yard line with less than a minute left in the first half.

“Being able to maintain our lead at halftime was huge,’’ said Ellmore, who had between 10-15 tackles according to Covington coach Tyler Campbell.

The goal-line stand just before halftime was actually one of three times the Trojans (2-2) turned the Mustangs away at the doorstep of the end zone.

“Those were the biggest plays of the game,’’ Ellmore added. “They proved to be turning points. We were able to keep them out of the end zone and then we turned around and got points on the board.’’

That was definitely the case in the second half.

Covington was clinging to a 22-14 advantage late in the third quarter when Fountain Central quarterback Seth Gayler found Austin Pickett for a 64-yard completion. The Mustangs had the ball on the Trojans 2-yard line.

After a quarterback sneak by Gayler got the ball down to the 1, a pair of penalties on Fountain Central (0-2) pushed them back to the 11. Three plays later, Covington defensive back Asa Hohenstein picked off Gayler’s pass in the end zone and ran it out to the 30.

“We had the ball inside the 5 three times and we came away with no points,’’ Fountain Central coach Ryan Hall said. “We went the wrong way on all three of those. If we would have scored those three touchdowns, we could have been up 32-14 or something like that.

“We just didn’t execute down there.’’

Fountain Central ran 25 total plays on five possessions inside the Covington 20-yard line. Those five trips into the red zone resulted in just two touchdowns for the Mustangs.

“That happens when you are not prepared,’’ Hall said. “You have to be ready to go at all times.

And after the last goal-line stand by Covington to start the fourth quarter. The Trojans turned its 22-14 lead into a 42-14 rout with three touchdown passes by junior quarterback Alan Karrfalt.

“They were able to throw the ball whenever they wanted to and they did,’’ said Hall.

Karrfalt was an amazing 34-of-43 passing for 403 yards and he had five touchdown passes — two to Ellmore, one to Dane Gerling, one to Evan Valdez and one to Keller.

“That’s decent,’’ said Campbell when informed of Karrfalt’s passing yardage. “He is making good decisions. He is not chucking the ball 40 yards down the field a ton. He is throwing his hitch routes and slant routes — letting his guys make plays for him.

“We talk all the time that his No. 1 job is to throw completions and he did that tonight.’’

Gerling and Keller had the biggest numbers in the receiving game for the Trojans. Gerling had 157 receiving yards on six receptions including a nifty 81-yard touchdown catch and run in the second quarter, while Keller had 11 catches for 133 yards.