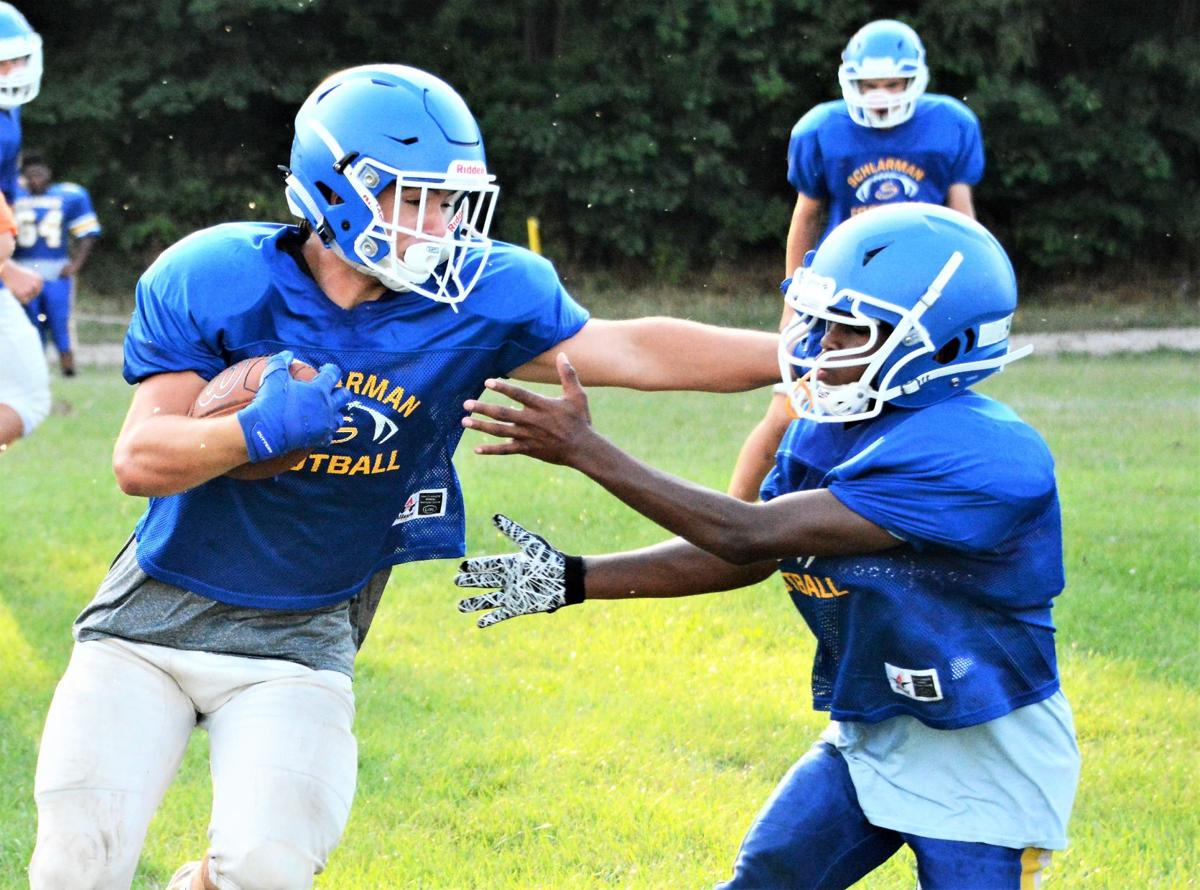 Schlarman Academy running back Zach Henk, left, attempts to fend off defensive back Kionte Williams during Thursday’s practice at Drummy Field in Danville. After five straight seasons playing with Hoopeston Area, the Hilltoppers are fielding an 8-man team this year. 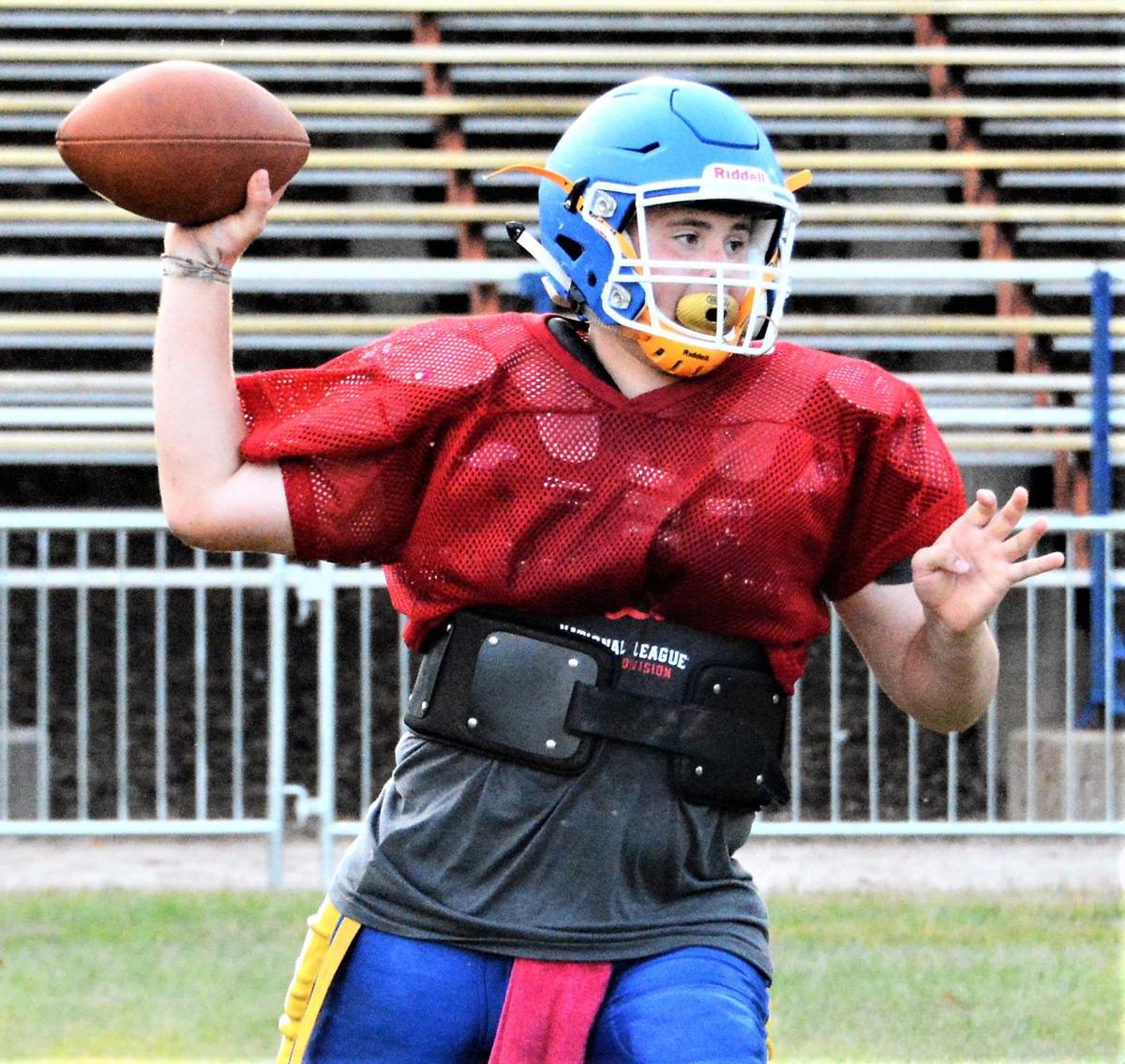 Chad Dare/Commercial-News Schlarman Academy quarterback Marcus Blurton, who threw for 975 yards and 9 touchdowns last season for HASAAP, is one of the key leaders for the Hilltoppers 8-man team this season. 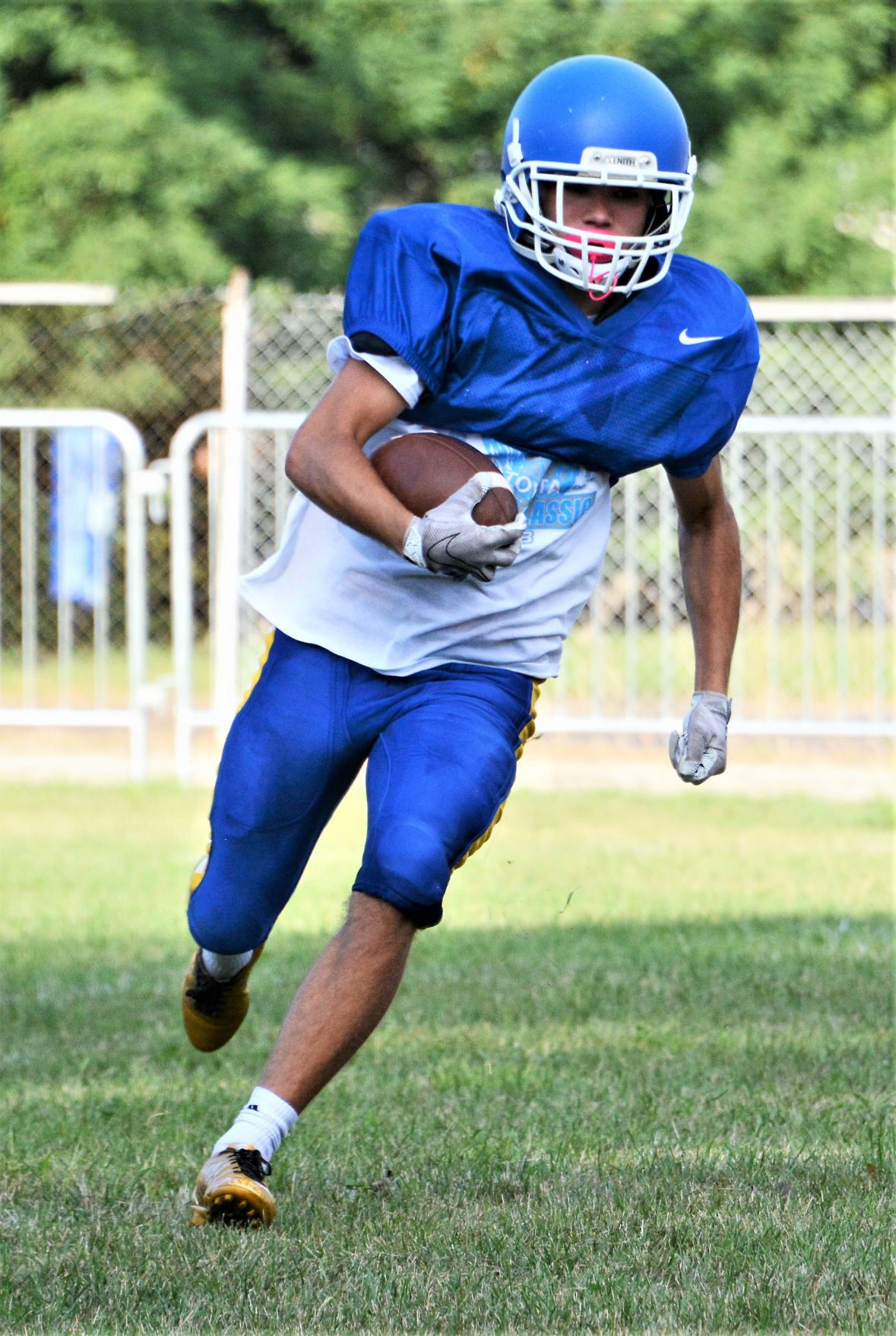 Schlarman Academy senior Vaughn Black, shown here running back a kickoff during Thursday’s practice, figures to be one of the top offensive threats for the Hilltoppers. Black caught 22 passes for 398 yards and 5 touchdowns last season for HASAAP. He also ran for 98 yards on 10 carries.

Schlarman Academy running back Zach Henk, left, attempts to fend off defensive back Kionte Williams during Thursday’s practice at Drummy Field in Danville. After five straight seasons playing with Hoopeston Area, the Hilltoppers are fielding an 8-man team this year.

Chad Dare/Commercial-News Schlarman Academy quarterback Marcus Blurton, who threw for 975 yards and 9 touchdowns last season for HASAAP, is one of the key leaders for the Hilltoppers 8-man team this season.

Schlarman Academy senior Vaughn Black, shown here running back a kickoff during Thursday’s practice, figures to be one of the top offensive threats for the Hilltoppers. Black caught 22 passes for 398 yards and 5 touchdowns last season for HASAAP. He also ran for 98 yards on 10 carries.

DANVILLE — Going to the Drummy Field on Friday nights for Schlarman football games was a special childhood memory for Marcus Blurton.

The Hilltoppers had opened the year with three straight losses, 62-0 against Cerro Gordo/Bement, 82-6 against Villa Grove and 48-6 at home against Oakwood/Armstrong-Potomac. Schlarman forfeited its final six games because of low numbers and injuries. It appeared the football was over at a program that won back-to-back state title in 1980 and 1981.

“It was really sad for me as a kid,’’ said Blurton, a senior this year at Schlarman Academy. “I really thought that my high school football career was going to consist of four years of playing on the co-op team at Hoopeston Area.’’

Hoopeston Area provided an opportunity for Schlarman, as the Cornjerkers hosted a co-op football team for the past five years.

But this season, the lights at Drummy Field will shine bright four times as the Hilltoppers football program has returned. Schlarman Academy has joined Milford/Cissna Park and Champaign Judah Christian in the 8-man football field.

“Honestly, I didn’t think that football would ever come back to Schlarman,’’ said senior Vaughn Black, who is one of five players at Schlarman that was part of the co-op team last year at Hoopeston Area. “It was hard traveling up to Hoopeston every day for practice. And I don’t think the community thought of us as being a Danville team.

“I think bringing football back, even with the 8-man game, is going get the community back out here and supporting Schlarman Academy again.’’

Matt Blurton, who is the first-year head coach at Schlarman Academy, admits there is already a different feeling on the campus.

“I’ve been around this school for a long time and there is a vibe that hasn’t been here in a long time,’’ he said. “I believe it’s an energy that will carry over all all of the other sports like basketball and baseball.’’

Marcus Blurton admitted it was both an exciting and emotional time for him.

“It’s really exciting to bring football back to Schlarman,’’ said the senior quarterback. “But, it also felt that we were leaving a team behind. Some of us had three years invested into that team at Hoopeston and we were looking forward to this season.

“In the end, getting football back at Schlarman is a very big deal.’’

So, what is 8-man football?

Black acknowledged that he was hesitant about playing 8-man football when the announcement was made back in April.

“I was concerned that I wouldn’t get seen by college programs,’’ he said. “But, as I learned about the game, I quickly realized that it still football.

“I have the same responsibilities that I would have had in the 11-man game. On defense, it’s about tackling the guy with the ball. And on offense, its about catching the ball and scoring touchdowns.’’

Both the players and the coach admitted that they went to the Internet to search out information for 8-man football.

“I did a lot of searching and we had a lot of meetings as a coaching staff to develop our gameplan for this year,’’ Matt Blurton said. “When you work on things, it seems like you are always one man short, especially on the defensive side of the football.

“Every defensive plan that I drew up, I kept thinking we needed a guy here or there to really make this work.’’

But, that wouldn’t be 8-man football.

“Because of that, we have really emphasized tackling,’’ he said. “We felt it was important to teach these kids the right way to tackle.

“I feel that we will go as far as our defense takes us.’’

Actually with only five players with football experience, Matt Blurton admitted that the coaches found themselves going back in time during the summer contact period.

“We have many kids that haven’t played football before and they didn’t have any bad habits,’’ he said. “We started with the basic fundamentals back in June, as we just tried to build them up.

“Sometimes, I think we felt like were coaching youth football, again.’’

Guys like Black, Marcus Blurton, Michael Welsch, Dakota Keller and Seth Bennett have been counted on as leaders, but also salesmen for the program.

“I was able to get a few guys to come out for the team,’’ Black said. “It’s kind of interesting seeing all of your teammates walking the halls with you.

“I think we have developed a stronger bond because of it.’’

Matt Blurton says that Schlarman Academy has nearly 20 players on the roster, which is more than enough for a 8-man program.

“I thought we needed 16 before the year started,’’ he said. “I’ve actually been pleasantly surprised that we’ve had more than 16 all summer and so far during the preseason camp.

“The sky is the limit for this group, as long as they believe in the potential that they have. I think we could have a special season, because we have some really athletic kids and the best thing about them is that they are so willing to learn.’’

But, what about size?

“I don’t think we need a lot of big guys,’’ said Marcus Blurton, noting that there are only three linemen in 8-man football. “We just need good strong guys. We can be a solid team if we are strong and quick.’’

Both Black and Marcus Blurton think that a .500 record this fall is within reach for the Hilltoppers.

“We haven’t really seen anyone, but Milford, but I’m pretty confident that we can be around the .500 mark and get into the third round of the playoffs,’’ Black said.

One thing that is for certain with Schlarman Academy football this fall is that the Hilltoppers are getting to see a lot of countryside.

Schlarman plays three straight road games to open the year, and all three trips are more than two-and-a-half hours from Danville.

“We are excited to do all of this traveling to represent Schlarman Academy,’’ said Marcus Blurton.

The Hilltoppers first home game at Drummy Field will be Sept. 20 against Milford/Cissna Park, the defending state champions in 8-man football.