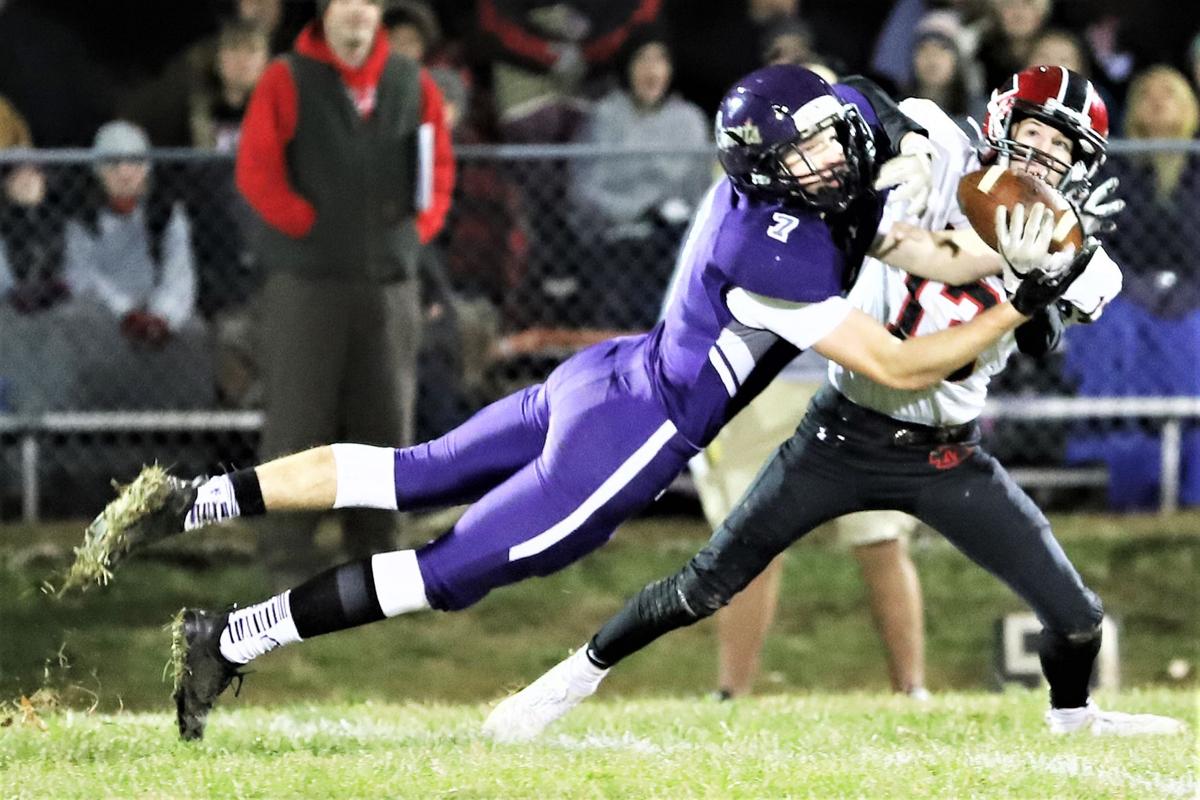 Oakwood Comet sophomore Josh Young dives for a pass from quarterback Rhett Harrison in the second quarter of Friday’s IHSA Class 2A playoff game at Oakwood. Nokomis linebacker Isaac Satterlee was called for pass interference on the play. Oakwood won its first playoff game in 31 years with a 20-0 triumph over Nokomis. 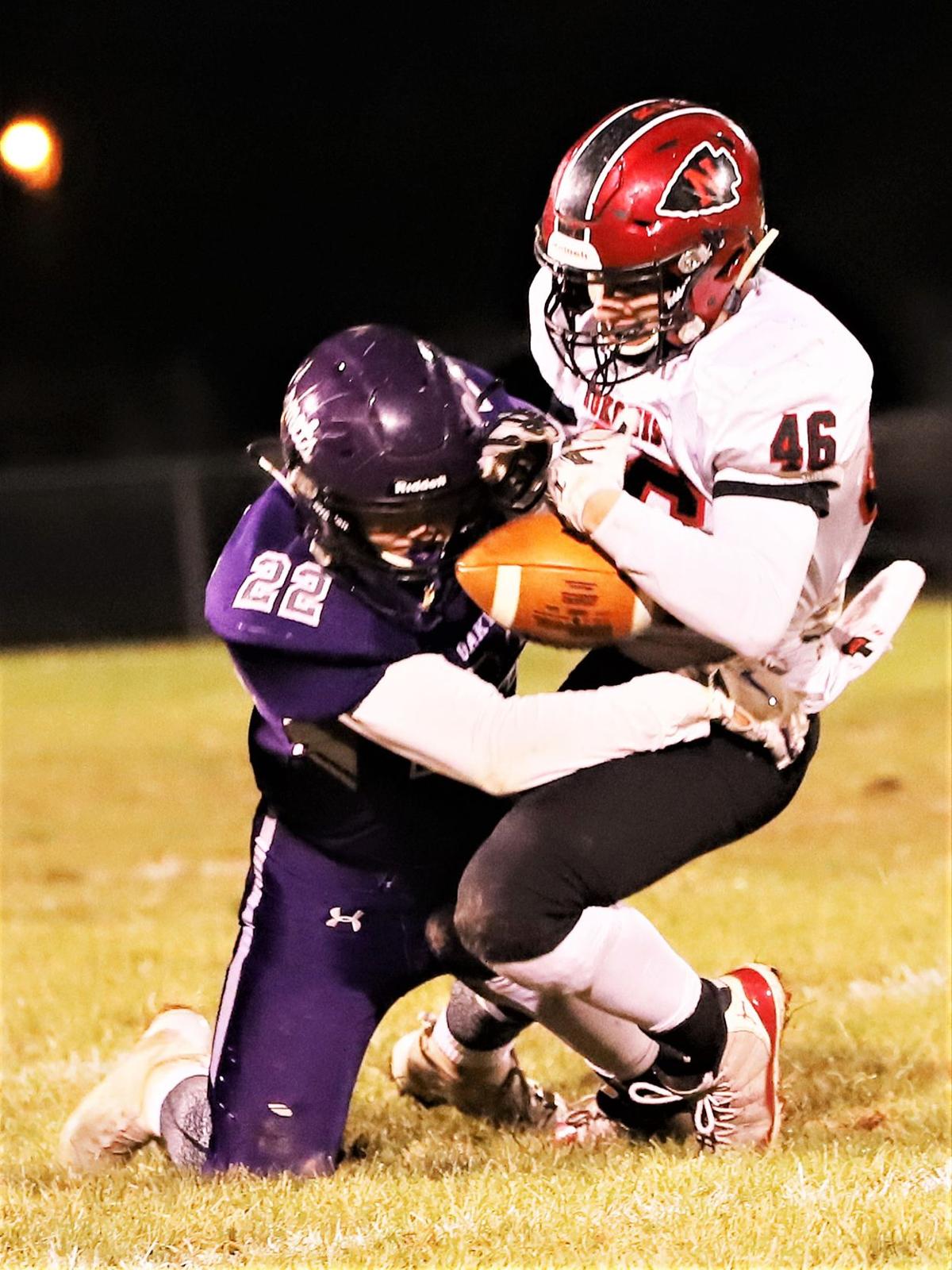 Oakwood Comet sophomore Josh Young dives for a pass from quarterback Rhett Harrison in the second quarter of Friday’s IHSA Class 2A playoff game at Oakwood. Nokomis linebacker Isaac Satterlee was called for pass interference on the play. Oakwood won its first playoff game in 31 years with a 20-0 triumph over Nokomis.

FITHIAN — Oakwood football coach Al Craig is going to spend all weekend looking at himself in the mirror.

Not because he is a vain person, but the second year coach of the Comets will be storing mental images of what he looked like with a full beard.

On Monday, his players get to decided how their coach will look after a 20-0 triumph over the Nokomis Redskins in the first round of the IHSA Class 2A playoffs. It’s the first playoff win in 31 years for Oakwood.

“I had to give them something,’’ said Craig, admitting it was a little motivational ploy by the coach. “This beard has been very important to me. I’ve had it since I was 16 years old.

The Comets (8-2) reached the second round of the playoffs for the first time since 1988 with a good ol’ fashion defensive shutout.

Nokomis (7-3) managed just 109 yards of total offense and the Redskins turned the ball over three times in the loss.

“Our defense played phenomenal,’’ said Oakwood senior linebacker Colby Smiley. “Everyone was hitting their gaps. We gave them a new look and it worked very well.

“In the second half, we went back to our basics.’’

It didn’t seem to matter what the Redskins tried to do on Friday night, the Comets were always in the right place at the right time.

Nokomis was never able to get inside of the Oakwood 30-yard line and the Redskins didn’t have a single drive that went beyond eight plays on Friday night.

“Our defense was lights out,’’ Craig said. “The kids stuck to the plan and they really bought into it. We know that Nokomis was a running team and we’re a running team, so we know how much we hate third down-and-10s and that was our goal was to keep them behind the chains and facing a lot of third-and-long situations.

“We were able to force them to make plays in the passing game.’’

That didn’t work for Nokomis.

Senior quarterback Alex Tosetti was 4-of-10 for 39 yards and sophomore Connor Overby was 0-for-2 with an interception in the final minutes.

“We were just really clicking on defense,’’ said Oakwood senior linebacker Bryce Harrison, who had a fumble recovery in the contest. “We were really hungry for this win.

“Our plan all week was to do whatever it took to get to the second round.’’

The Comets got all the offense they would need on its second offensive possession. Senior quarterback Rhett Harrison capped a 6-play, 61-yard drive with a 20-yard touchdown pass to running back Gaven Clouse.

“Getting this opportunity to finally win a playoff game with a group of guys that I’ve played football with since I was 5 is just a terrific experience,’’ Smiley said. “We don’t want to stop here. We want to keep this going as long as possible.’’

Clouse, Smiley and Jack Carey combined to carry the football 38 times for 232 yards. Clouse who had 82 yards on 15 attempts capped the scoring with 8-yard touchdown plunge early in the third quarter.

Friday’s victory is only the fourth postseason victory in school history for Oakwood and it’s a measure of redemption after the Comets suffered a 28-21 loss in the first round last year at Pana.

“A lot of unfortunate things happen last year, but hopefully, this is our first step toward making up for that one,’’ said Harrison, admitting that Oakwood would welcome a rematch with the Pana Panthers in the second round, if Pana can beat Red Bud in a 2 p.m. game this afternoon.

Regardless of who wins that game today, Oakwood would be required to travel to either Pana or Red Bud next week.

of Rossville, passed away May 28, 2020, at Heritage Health, in Hoopeston. Graveside services 2:00 p.m. Monday, June 1, 2020, at Rossville Cemetery. Blurton Funeral Home is in charge of arrangements www.BlurtonFuneralHomes.com.