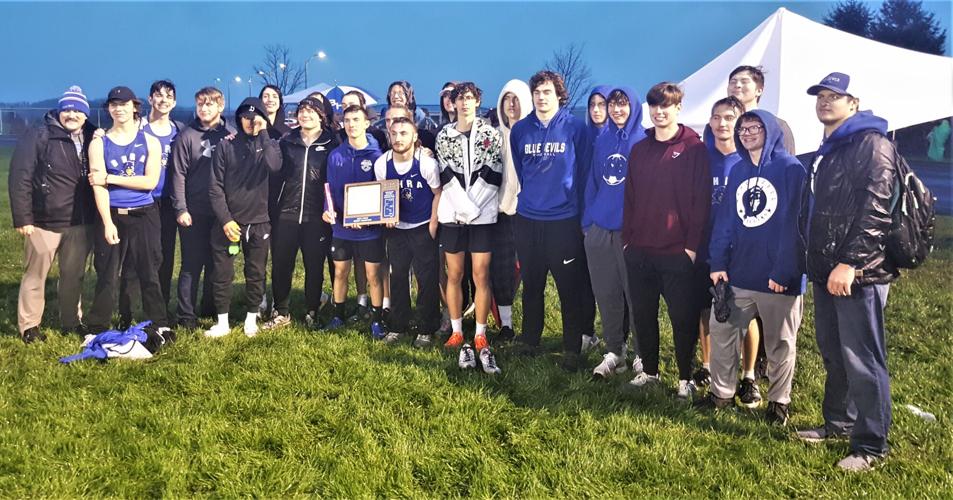 Members of the Bismarck-Henning/Rossville-Alvin boys track and field team pose with the championship plaque after claiming the 2022 Vermilion County Title at Hoopeston Area High School. 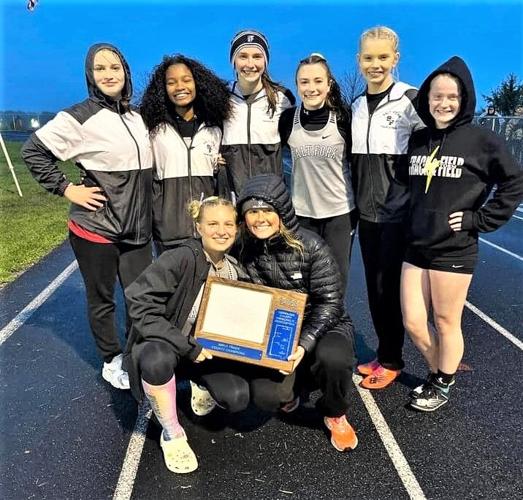 Members of the Salt Fork girls track and field team pose with the championship plaque after winning the 2022 Vermilion County Meet on Friday at Hoopeston Area High School.

Members of the Bismarck-Henning/Rossville-Alvin boys track and field team pose with the championship plaque after claiming the 2022 Vermilion County Title at Hoopeston Area High School.

Members of the Salt Fork girls track and field team pose with the championship plaque after winning the 2022 Vermilion County Meet on Friday at Hoopeston Area High School.

HOOPESTON — Being a four-time champion at the Vermilion County track meet is fairly rare.

With the last few years, athletes like Jenny Kimbro, Abby Nicholson and Caine Wilson from Salt Fork, Sierra Bryant and Blake Reifsteck from Bismarck-Henning/Rossville-Alvin and Oakwood’s Jon Davis have earned the distinction of finishing the high school track careers as undefeated county champions.

Unfortunately the cancellation of the 2020 season because of Covid-19 kept Salt Fork’s Payton Taylor and Gracie Jessup from joining this group.

On Friday night at Hoopeston Area High School, Salt Fork’s Olivia Birge and Brynlee Keeran along with Bismarck-Henning/Rossville-Alvin’s Eli Mojonnier capped their careers with three-time championships. They also missed out on the coveted four-time honor because of Covid-19.

“It really means a lot to me to be a three-time champion,’’ said Keeran, whose three times came in the triple jump. “It’s actually kind of surprising because I didn’t start to triple jump until I got to high school. I did it for the first time at an indoor meet and we just decided to keep me doing it.’’

Birge, whose three titles came in the discus, admits it’s a little frustrating not being able to claim four straight championships.

“It definitely has a better ring to it than a three-time champion,’’ she said. “But, everyone knows that it’s not four because of Covid. There was nothing that we could do about that.’’

Mojonnier, whose titles came in the distance events, admitted its a nice accomplishment but he remains focused on winning another state title in the 800 meters.

Actually both Birge and Mojonnier took advantage of that season off to make themselves better, stronger.

“I know this sound silly, but I remember working out all of time and I lost a lot of weight as I picked up long-distance running,’’ said Birge, who also won the shot put title Friday night. “I think that build up a good foundation for me that I’ve been able to take advantage of the past two years.’’

“I spent all of my free time working out and running,’’ he said, noting there was much else to do. “That was when (cross country) coach (Todd) Orvis came to Bismarck and it turned into a big offseason of me just getting better.’’

Not only did Birge, Keeran and Mojonnier accomplished their individual goals on Friday, but their respective teams, Salt Fork Storm girls and the Bismarck-Henning/Rossville-Alvin boys, claimed the team titles.

“After not winning the team title in our freshman year, Brynlee and I made a pact that we refused to lose again in either the county or conference meet,’’ Birge said. “Winning County is so much fun because it’s about bragging rights.’’

Keeran, who also won the long jump event, pointed out that Storm, who had eight competitors, got contributions from everyone on Friday night.

“Coach (Steve) Trompeter is really good at putting people in the right spots,’’ she said. “We have some teammates that had to get out of their comfort zone for us to win.’’

It is the third straight title for the Storm.

For the Blue Devils, the boys title is their first since 2017 and it snapped a three-year run by the Storm.

“This was really important for our seniors,’’ said Bismarck-Henning/Rossville-Alvin first-year coach Nathan West. “They thought they had a really good squad to win it two years ago, but Covid kept them from it.

“We had a really good plan coming into the night and we had a lot of performances that went right for us.’’

“It was a heavy workload but I just wanted to do whatever I could to help my team,’’ he said, noting that he wasn’t worried about his times. “There is a saying that I like, ‘no one is taller than the last-man standing.’ That is how it went tonight for us.’’

Mojonnier pointed out that the Blue Devils also got some key performances from other seniors like Murphy McCool, Rhett Harper, Mason Hackman and Emerson Thorlton.

Salt Fork junior Garrett Taylor didn’t let the miserably wet conditions affect his performance in the discus. His winning toss of 52.13 meters or 171 feet was a new County Meet record.

“I practice in conditions like this, so I’m used to it,’’ he said. “I knew I had nothing to lose, so I just let one out.

“The weather sucked, but I knew I could still have a good throw.’’

Taylor, who also claimed the shot put title, admits his goal for this season is throw over 180 feet.

Other individual winners on Friday were Nathan Kirby in the 100 meters and the 110 hurdles, Logan Hughes of Westville in the 200, Brysen Vasquez of Salt Fork in the 400, Tyler Miller of Westville in the 300 hurdles, Karson Lewsander of Georgetown-Ridge Farm/Chrisman in the high jump, Dayton Grant of Georgetown-Ridge Farm/Chrisman in the long jump and Ayden Ingram of Bismarck-Henning/Rossville-Alvin.

Westville senior Savannah Tyler was nearly a four-event champion on Friday. Tyler won the 200 and anchored the Tigers’ winning 400 and 800 relay teams but her victory in the 100 was overturned by the games’ committee after she wasn’t disqualified for a false start. Hoopeston Area’s Bre Crose was awarded the 100 title.

Other individual champions on the girls side were Nikita Taylor Oakwood in the 400, Macie Russell of Salt fork in the 800 and 1,600 races, Allison Pickett of Hoopeston Area in the 3,200, and Bismarck-Henning/Rossville-Alvin’s Ella McFarland in the high jump.