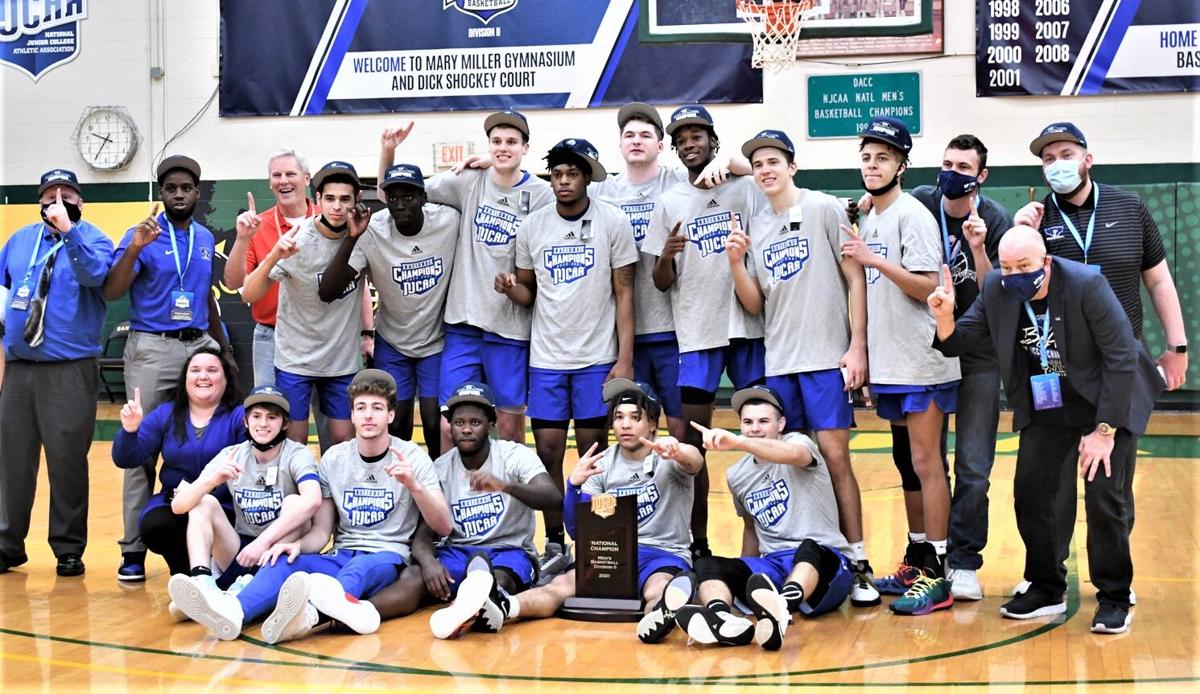 Members of the Des Moines Area Community College basketball team post for a photo with the National Championship trophy after beating Davidson-Davie 86-75 in the title game of the NJCAA Division II National Tournament on the Dick Shockey Court at the Mary Miller Gymnasium. 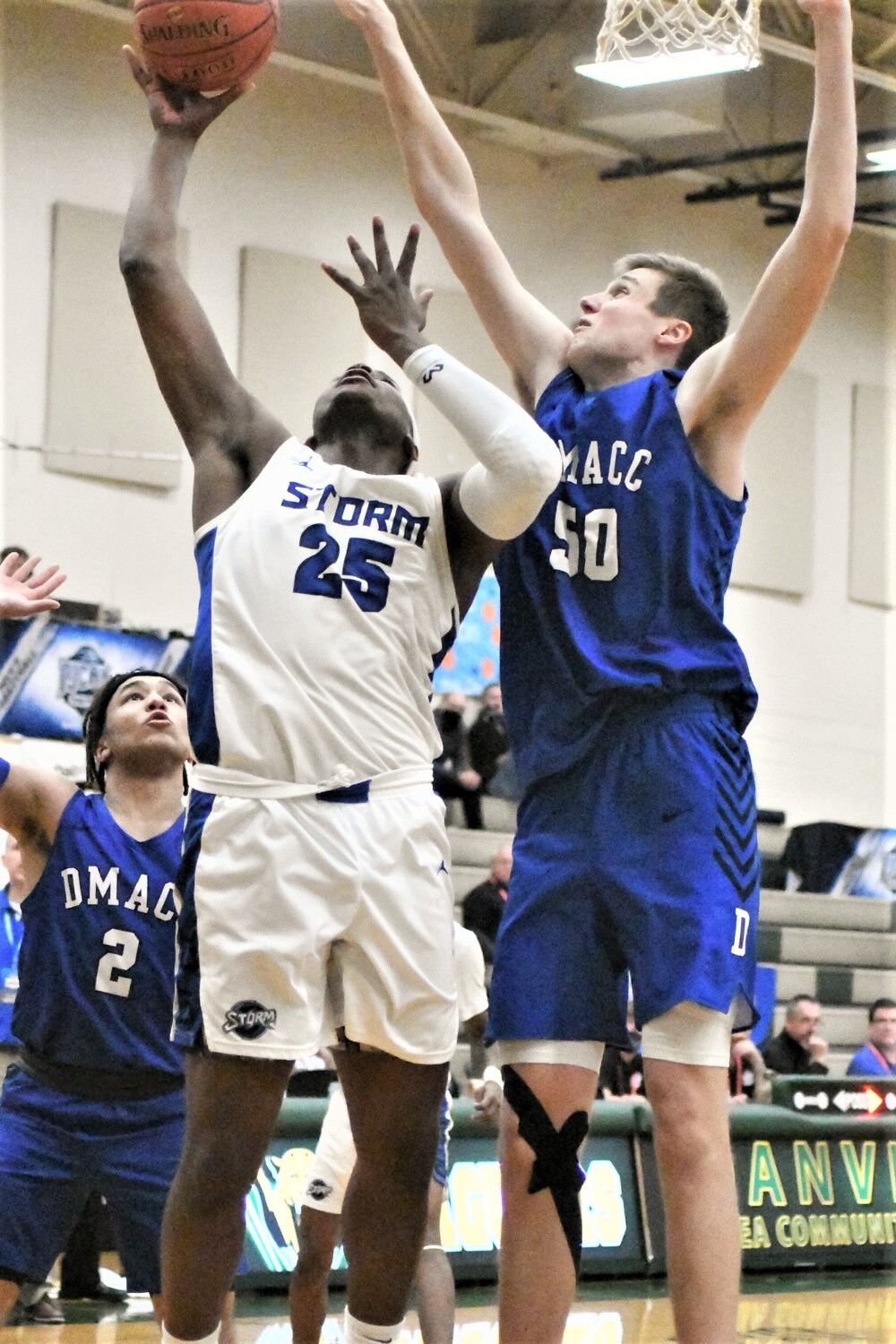 Members of the Des Moines Area Community College basketball team post for a photo with the National Championship trophy after beating Davidson-Davie 86-75 in the title game of the NJCAA Division II National Tournament on the Dick Shockey Court at the Mary Miller Gymnasium.

Yes, he scored a game-high 23 points as he was 7-of-9 from 3-point range in the championship game for the Bears but that isn’t what makes him unique.

No, what makes Haffner unique is that he is 24-years old and he is already married.

“Christian told me that he wanted a chance to win a national championship when he came to play for us this season,’’ said DMACC coach Brett Putz. “We were able to get it done tonight.’’

DMACC claimed its first-ever national title with a 86-75 victory over top-seeded Davidson-Davie on Saturday night.

“Christian picked a really, really good game to have his best 3-point shooting game of the tournament,’’ Putz said.

Haffner, who had been 6-of-18 from behind the arc in his first three tournament games, made five 3-pointers in the first half as DMACC built a 44-39 halftime advantage.

“I was due for one of these games,’’ said Haffner, who admitted he started the season making more than 45 percent of his 3-pointers. “The credit goes to my teammates for getting me the ball in a position where I could knock down those 3-pointers.

“It was pretty easy with those guys creating the shots for me.’’

Davidson-Davie coach Matt Ridge didn’t want Haffner, nor Zach Hobbs, who had 19 points and a pair of 3-pointers, to get any open looks in Saturday’s championship game.

“We wanted to make them drive everything,’’ he said. “We knew if we gave them an inch or two, they were going to knock down those shots.’’

But, how did DMACC get itself a 24-year old sophomore?

“After high school, I went to Marquette and then I went on a 2-year Mormon mission,’’ Haffner said. “Honestly, I thought about giving up basketball, but I realized that I wanted to give it one more chance.’’

So, why did he pick the Bears?

“I knew about the guys that were coming back and I knew we had a good chance of winning,’’ he said. “My only goal was to win a National Title and we did it.’’

One of those players that Haffner knew about coming into this season was sophomore point guard Willie Guy, who was named the tournament’s most valuable player, after averaging 15.5 points, 5.0 rebounds and 8.5 assists per game.

In the championship game, Guy finished with a tournament-best 12 assists to go with 7 points and four rebounds.

“He was awesome,’’ Haffner said.

“To only have four turnovers against that kind of pressure shows just how good he is,’’ Putz said.

Guy admitted that controlling the pace was an important piece of the puzzle for DMACC.

“We knew that they like to get up and down the court and that they wanted to make it a track meet,’’ Guy said. “We had to stay strong with the ball, find the open man, make quick passes and it would lead to easy baskets.

“That’s what you have to do against a team that is playing that type of high-risk, high-reward defense.’’

Davidson-Davie took a 55-49 lead with a 13-0 run early in the second half and the Storm had a chance to extend their lead to 10 with just 8 minutes left on a 3-point attempt by Isaiah Pruett that just went off the back of the rim.

Over the next five minutes, DMACC went on a 20-0 run as Davidson-Davie missed five shots and had five more possessions end with turnovers.

“I was searching for anything and everything to stop their run,’’ Ridge said. “We kept subbing guys and changing our defenses, but we had no answer. We couldn’t get the stops when we needed them.

“They were just really executing their stuff during that run.’’

“We were getting killed with the offensive rebounds,’’ he said. “When we did a better job of rebounding, we were able to push it up court and get some easy looks.

“We just had to turn it up a little more defensively and make sure we got the rebound.’’

“I think this shows that the ICCAC is the strongest and best conference in the country,’’ Guy said. “That conference prepared us for Danville.’’