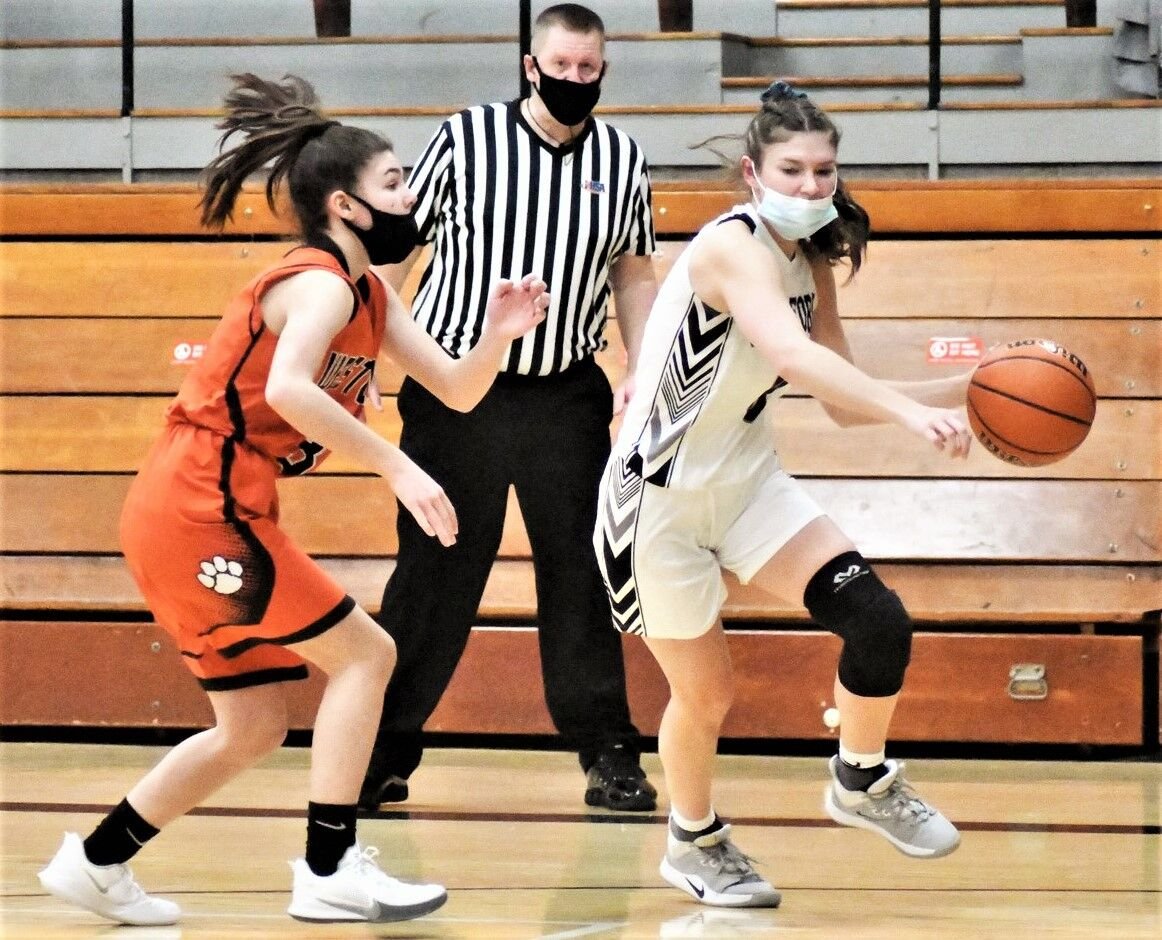 Salt Fork senior Carsyn Todd attempts to drive past Westville sophomore Lydia Gondzur during the first quarter of Thursday’s Vermilion Valley Conference girls basketball game in Catlin. Todd had 14 points and a team-high six steals in a 60-17 victory for the Storm. 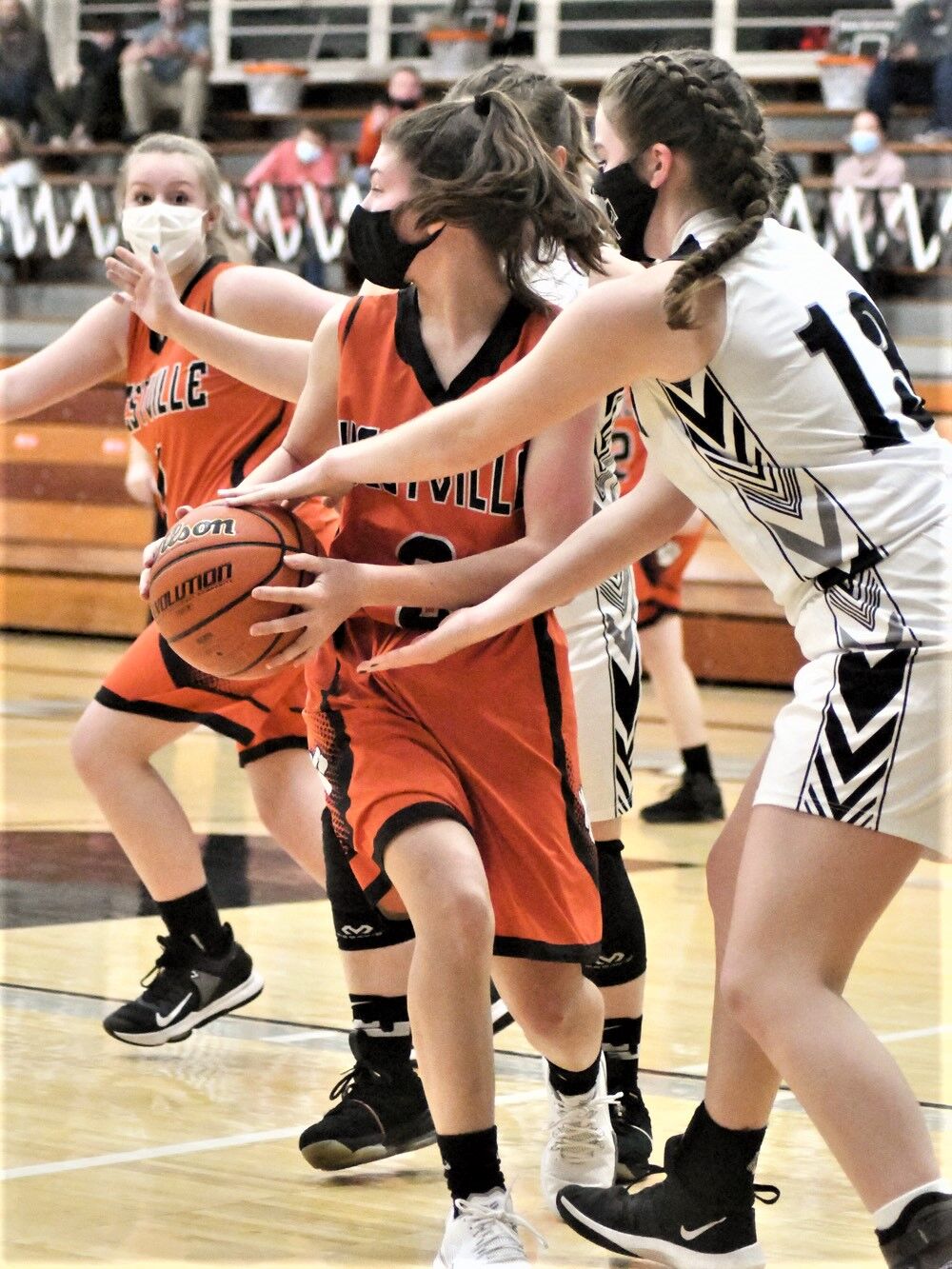 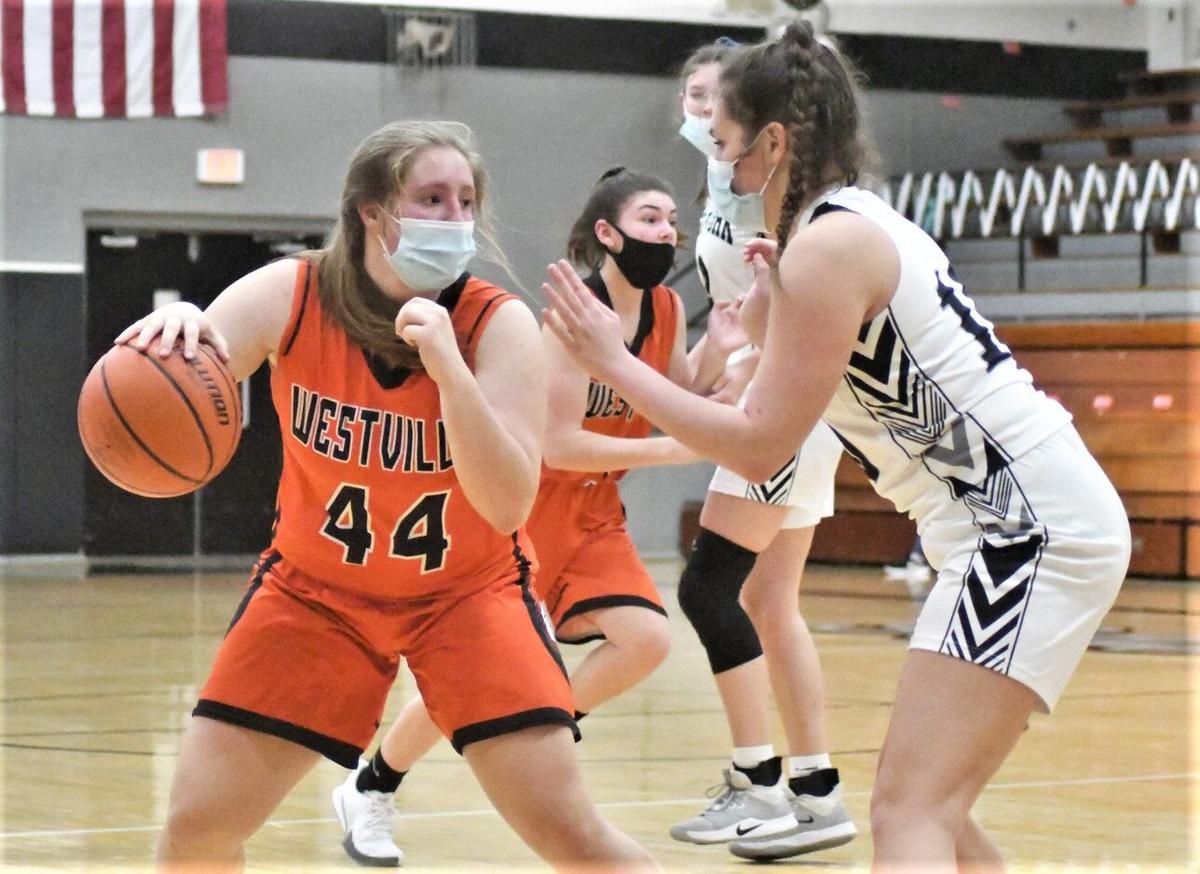 Salt Fork senior Carsyn Todd attempts to drive past Westville sophomore Lydia Gondzur during the first quarter of Thursday’s Vermilion Valley Conference girls basketball game in Catlin. Todd had 14 points and a team-high six steals in a 60-17 victory for the Storm.

CATLIN — Height and quickness are a wonderful combination on the defensive end of the basketball court.

Salt Fork proved that on Thursday night with a 60-17 triumph over Westville in a Vermilion Valley Conference girls basketball game in Catlin.

That group held the Tigers to a paltry 12.5 percent shooting percentage (5-of-40) on their way to a senior night victory.

“They got after us and they came to play,’’ Westville coach Nathan West said. “It was their senior night and you could tell that was a senior-laden group. They beat us in every facet of the game.’’

“Our offense comes from our defense,’’ said Todd, who finished with 14 points. “When we play really good defense, we can get into the flow of our offense and it goes from there.

“We knew what they wanted to do and we knew where we had to be against them.’’

And Todd admitted that’s nice to have a 6-foot-2 center like Chew in front of the basket.

Chew had four blocks in the first quarter and two more in the second quarter before Westville (2-2 overall, 2-2 in the VVC) decided to change it offensive scheme.

“She does a very good job of not fouling,’’ West said. “She plays very straight up, she waits for you to get into your shooting motion and then she just gets the ball. We knew we weren’t going to be able to take it to the rim, but we continued to try to the same thing, expecting a different result.’’

Chew added eight points and nine rebounds to her six blocked shots. At halftime, the senior center was on pace for a triple-double.

“I think this was probably my best game of my career,’’ said Chew, who actually gave up basketball for her first two years of high school. “Honestly, I’m kind of mad with myself that I didn’t stick with basketball, but I’m really, really glad to be back.’’

Salt Fork coach Brian Russell said that Chew has improved dramatically for the Storm, who are now 4-0 overall and 4-0 in the VVC.

“She has allowed us to spread out and they have to worry about her in the middle,’’ he said. “She was very aggressive tonight and we were looking for that.

“I thought all of the girls came out more aggressive and there was a lot of good energy tonight.’’

The Storm, who were rated No. 9 in the first Associated Press Class 1A Poll of the abbreviated season, scored the game’s first eight points and they never looked back.

Senior guard Mackenzie Russell finished with a game-high 20 points on 9-of-11 shooting to go along a game-high five assists, three steals and seven rebounds.

“One of the things that we’ve talked about in this crazy year is doing everything together,’’ said Brian Russell. “Tonight, we played defensive as a collective group and I thought we also did that on the offensive end.’’

The Storm has 12 assists as a team and all five of its seniors scored at least one basket.

“Everyone was looking for everyone and we had a lot of really good passes,’’ Brian Russell said. “I was super happy that we got Lexi (Hettmansberger) that bucket in the fourth quarter.

“Having this senior night, hearing their laughter and seeing their smiles is priceless.’’

Todd acknowledged that she and the other seniors wondered if they were going to get to experience a senior night on the basketball court, just one year after winning a regional and sectional championship.

“Our main focus is to have fun and play one last time as a senior group,’’ she said. “We also want to get a conference championship, since that the only title we can still get this year.’’

Salt Fork is back in action on Friday night when it hosts Paxton-Buckley-Loda in a non-conference contest.