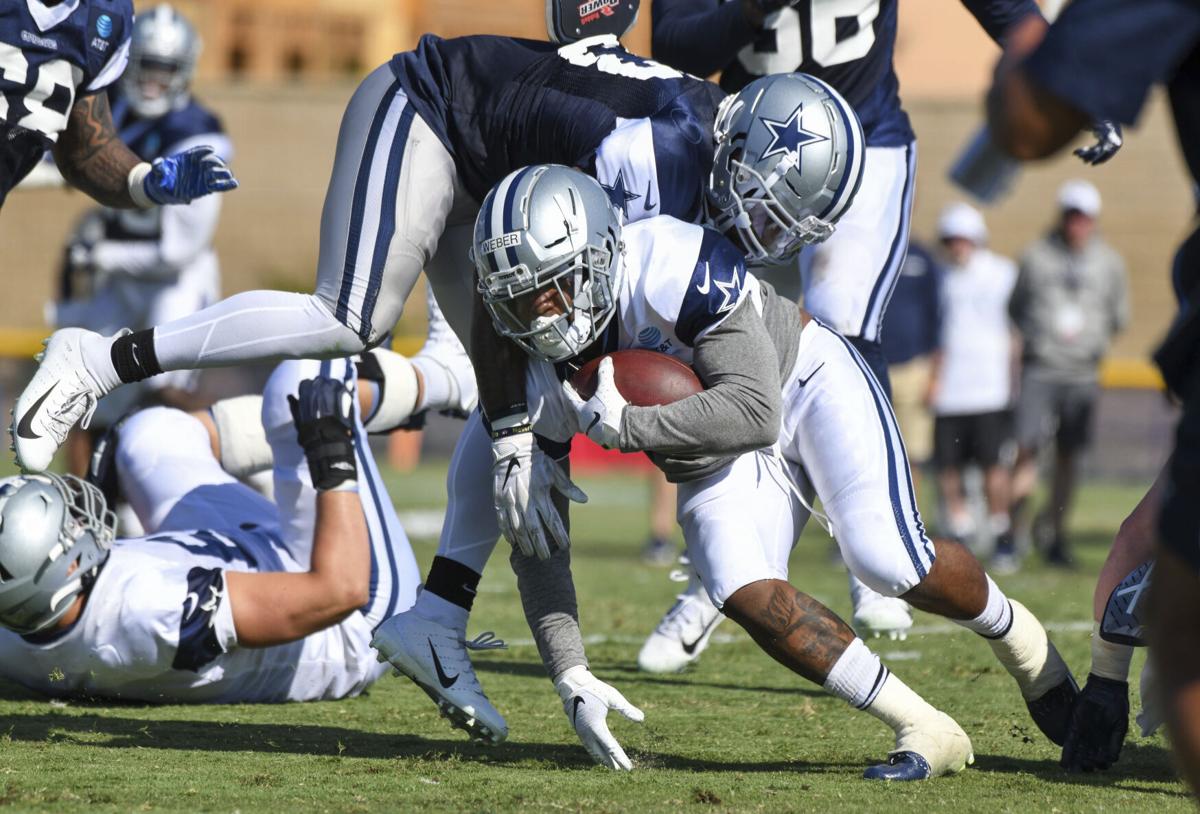 Dallas Cowboys linebacker Justin March tackles running back Mike Weber Jr. during the team’s training camp practice on July 29, 2019 in Oxnard, Calif. March is entering his fifth professional season and his third straight with the Cowboys. 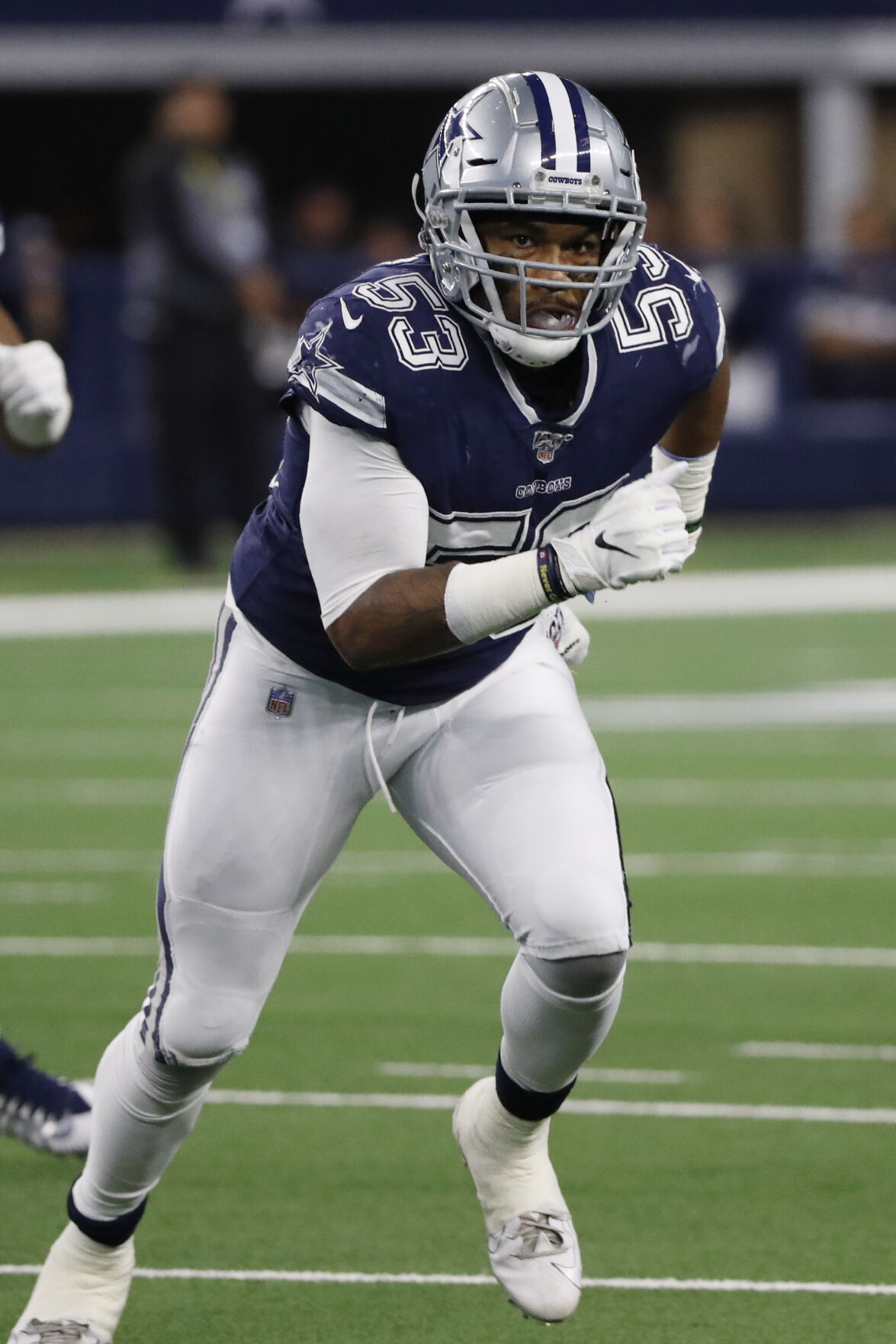 Dallas Cowboys linebacker Justin March tackles running back Mike Weber Jr. during the team’s training camp practice on July 29, 2019 in Oxnard, Calif. March is entering his fifth professional season and his third straight with the Cowboys.

DALLAS — It’s back to work next Tuesday for Danville’s Justin March.

The 27-year old linebacker for the Dallas Cowboys has spent the last four months working out at his home as all NFL facilities have been closed during the coronavirus pandemic.

“I’m ready as much as I can be with all of the adjustments in our offseason programs and that kind of stuff,’’ said March, noting that teams did not have their typical OTAs (off-season training activities) or a mini-camp during the summer. “Thankfully, I had a pretty nice setup at home. But I know that I’m ready for training camp. I’m ready to have some fun and I can’t wait to get back to play some football on an actual field.’’

March, who was the 2009 Commercial-News Player of the Year, is an avid player Madden Football on his gaming console. But, the fact that he hasn’t had one single day of practice in the offseasonis something brand-new for the fifth-year pro.

“You have to go all the way back to high school or actually before I was in high school,’’ March said. “The only thing we were allowed to do is our virtual program. We weren’t allowed to do any of the normal workout stuff that is really critical to our conditioning. In our facility, we have everything that we need, from the right food to eat while working out to hot tubs or cold tubs to just basic access to our trainers. We had to seek out all of that stuff on our own.

“Luckily for me, I was able to turn my garage into a weight room. Some of the younger guys on the team don’t own a house like I do, they live in apartments, so this has been a huge adjustment for all of us.

“But, I know it’s the same for a lot of people over the last four months. Everyone one of us have had to make adjustments in our normal routines.’’

For March, it’s a concern because his livelihood is directly related to his physical condition as 80 players will begin the year in training camp, but only 55 will make the team for the season opener, scheduled for Sept. 13 against Los Angeles Rams.

“I feel great and I’m ready to go. I’ve always been someone that has had the ability to drive myself to get better,’’ said March. “This summer was like being back in Danville during my high school days when I run around my neighborhood to get ready for the season.

“I think the biggest fear for most of us, is that we are not going to have all of the machines that help strengthen different muscle groups like our hamstrings because of the protocols established because of COVID-19.’’

And is he worried about possibly contracting the coronavirus?

“I don’t have any fear for myself, because I think with the protocols and all the stuff that the union and the league have agreed to, that I should be safe,’’ said March, who did admit it was unrealistic to think that 80 guys in the 32 locker rooms around the league won’t have some positive tests. “I think all of the players are more worried about taking the virus home to our wives, our kids and there are some players that have elderly parents living with them. And then there are the players with family members who have pre-existing medical conditions.’’

In an effort to limit their exposure, the NFL and the NFL Players Association have agreed to eliminate all pre-season games this year.

March, who came into the lead an undrafted free agent, see that as a problem.

“I understand what the games are all about. When I came into the league and even now, the preseason games were very important for guys that were fighting for a roster spot,’’ he said. “Not having those games will make it tough to showcase your talent on the big stage. Every year, there are guys that have their football careers determined during the preseason. That might be the last time that some of these guys get to play the game.

“I’ve actually played a lot in preseason games during my career, getting snaps on both defense and special teams.’’

In his last two seasons with the Cowboys, playing in all 32 games, March has played 464 snaps on special teams and 52 on defense during the regular season.

“The preseason has been my time to get in on defense, get my reps and have some fun,’’ March added.

Speaking of fun, March found the best silver lining to his four-month sabbatical from football.

“I’ve basically spent all of my time with my wife (Paige) and my kids (Jaxson and Ryah),’’ he said, adding that he would also regularly call his mother and his siblings. “Normally, I spend a lot of time working on my game and trying to make myself better. So, it was a big change for me to be around the house as much as I was.

“I think this time has made me a better person, husband, father, son and brother.’’

His duties as a father have definitely been challenged.

“My kids only want to eat goldfish (crackers) and stuff like that,’’ March said. “I’ve had to learn that you need to be self-disciplined as father and it’s not as easy as a lot of people think.’’

March admitted that it will be a little difficult leaving his house next Tuesday.

“I have to go back to football and they know that,’’ he said. “Of course, my son (Jaxson) keeps saying that he will just come with me.’’

Unfortunately, the new NFL protocols will not allow family members into the facility.

“That’s going to be another adjustment,’’ March said. “I have taken my son with me in the past and he like hanging around with the guys. I’m not even sure if family members are going to be allowed to attend the games.’’

It’s definitely a new world for March but he is ready to tackle it like he has done in the past.