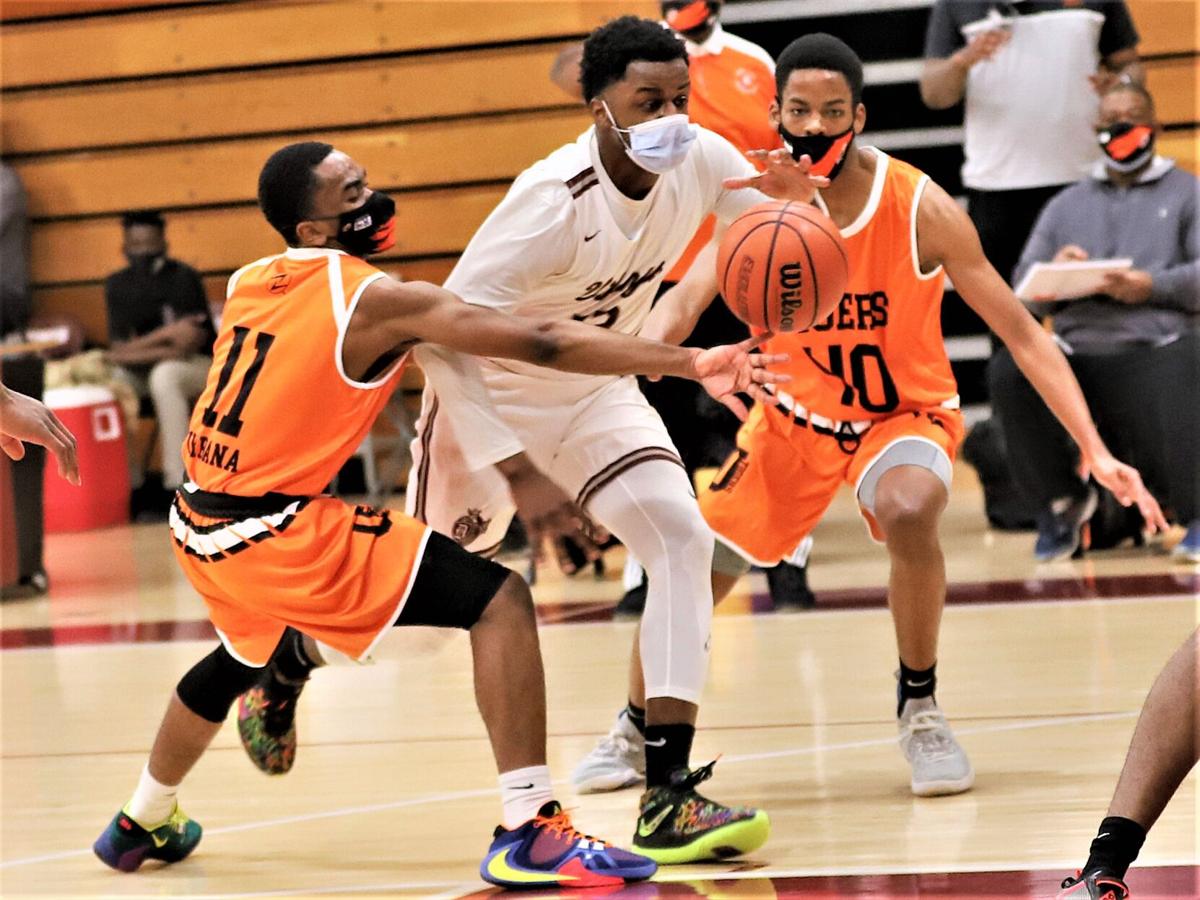 Danville senior guard Nathanael Hoskins drives to the basket past Urbana sophomore Gideon Kapongo during the first half of Friday’s Big 12 Conference boys basketball game at Danville. Hoskins finished with 24 points, 7 rebounds and 7 assists in the Vikings 76-56 victory over the Tigers. 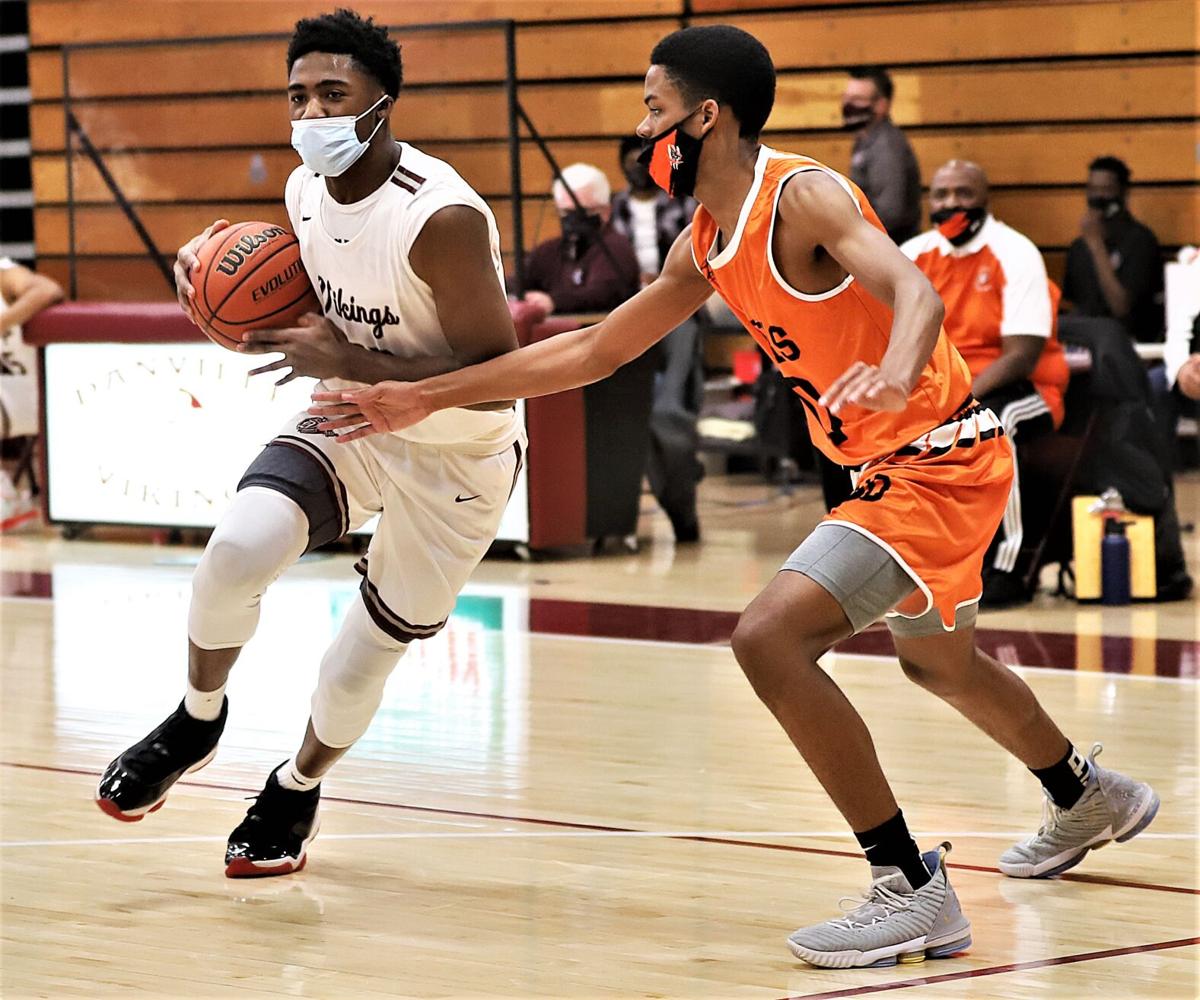 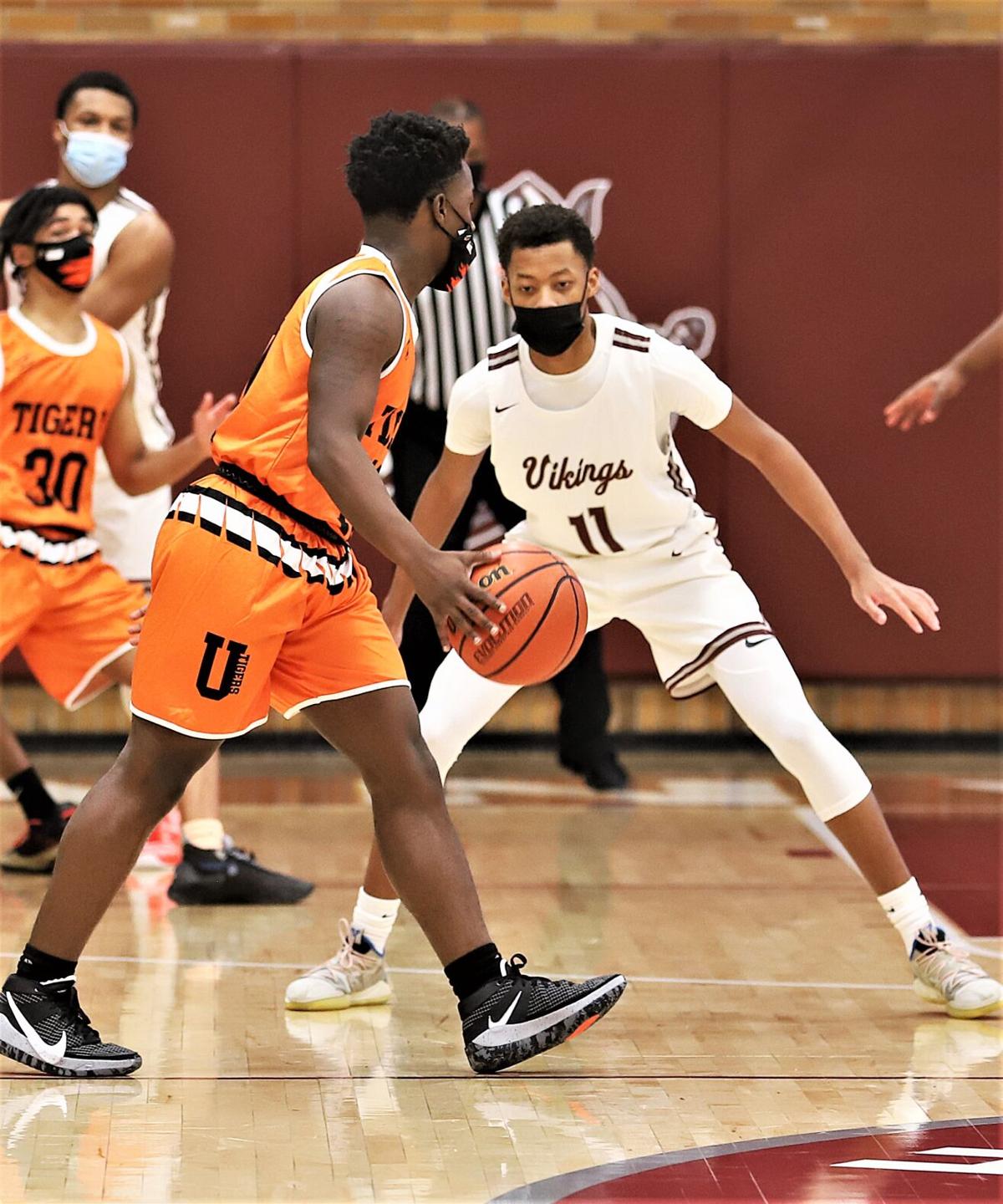 Danville senior guard Nathanael Hoskins drives to the basket past Urbana sophomore Gideon Kapongo during the first half of Friday’s Big 12 Conference boys basketball game at Danville. Hoskins finished with 24 points, 7 rebounds and 7 assists in the Vikings 76-56 victory over the Tigers.

DANVILLE – Senior leaders are supposed to be the face of the program — the guys that set the tone for the rest of the team.

Danville’s Tevin Smith and Nathanael Hoskins are the perfect examples.

The third-year starters for the Vikings not only set the tone during Danville’s 76-56 victory over the Urbana Tigers on Friday night, but Danville coach Durrell Robinson says that duo also gets the job done in other aspects.

“Those two are what our program exemplifies — great students and great athletes,’’ Robinson said. “They do the right things when nobody is watching. They just happen to be really good at basketball, as well.’’

That was definitely the case on Friday night as Smith and Hoskins, along with Michael Moore and Jaylin Howell celebrated their senior night victory in style with plenty of photos with their family and supporters.

“It felt really good to get this win, especially with it being our senior night,’’ said Hoskins, who scored a game-high 24 points. “We got to have our family and supporters here to witness the game in person, which was really special.’’

Friday was the first time that the Vikings played at home during this abbreviated COVID-19 basketball season and it showed.

“We had a couple of mishaps on defense, leaving them open for 3-pointers,’’ said Smith, who finished with 13 points and nine rebounds. “We changed it around in the second quarter as we went to our 1-2-2 zone instead of the 2-3.’’

While the defensive change definitely had an impact on the game as Urbana scored just 8 points on 3-of-12 shooting, it also seemed like Smith and Hoskins took full control of the contest.

The senior duo for the Vikings scored 16 of the team’s 18 second-quarter points as they were 7-of-7 from the field allowing Danville to take a 34-25 halftime advantage on the way to the 20-point victory.

“It was kind of emotional and it was different,’’ said Smith of his senior night experience. “I have watched other senior nights and there was always a lot of people here and a lot of stuff going on. This year, it’s different.

“I’m glad that we are having a season and senior night, but this was just different.’’

Instead of having a crowd of more than 500 people, there were barely 50 people in the gym for a rivalry game with Urbana.

“I can’t speak for everyone, but I know for me, I was a little nervous,’’ Hoskins said. “It’s been nearly a year since we played a game here at home.’’

While Smith and Hoskins were pivotal during the big second-quarter run for the Vikings, it was another senior — Moore — that hit a couple of big 3-pointers in the first quarter that helped get things started for Danville.

“We were able to find Michael Moore, who is a great shooter. We found him in rhythm and his shots really helped change the flow of the game,’’ said Robinson as Moore finished with 12 points.

Danville turned its 9-point halftime lead into a 53-35 advantage heading into the fourth quarter and with its three of its four seniors in double digits, the only thing left for the Vikings to accomplish on Friday night was to get its fourth senior — Howell — onto the score sheet.

With 1 minute, 57 seconds left, the 6-foot-3 senior guard buried a 3-pointer right in front of his team’s bench, much to the delight of his teammates along with the limited number of family and friends.

“We put the pressure on him and we had to make sure that he scored,’’ said Hoskins, who had seven rebounds and seven assists to go along with his 24 points. “I’m just glad that we all had big games on our senior night.

“We’ve been playing together for a long time and we have great chemistry together. Everything worked out great tonight.’’

It was also a big night for Danville sophomore O’Shawn Jones Winslow, who contributed a double-double of 10 points and 10 rebounds.

“O’Shawn stepped up,’’ said Smith, who also noted that freshman Caleb Robinson scored his first points on the varsity level with a pair of fourth-quarter baskets.

It’s that recognition by Smith that Robinson appreciates the most from his senior leaders.

“They have been great, not just with their performance on the court, but talking with the younger guys that we have and allowing them to grow,’’ Robinson said.

In Friday’s JV contest, Danville defeated Urbana 43-35. Micah McGuire led the Vikings with 11 points, while Javion Smith chipped in with 10.

NORMAL — Senior Tevin Smith scored a game-high 29 points as the Vikings improved to 4-1 on the season with a win over the Ironmen.

Smith, a verbal commit to Cal State-Fullerton, scored 9 points in the second quarter as Danville turned a 12-11 deficit into a 28-20 advantage at halftime.

The Vikings then put the game away with a 21-point fourth quarter with Smith scored 9 more points.

Hoskins chipped in with 12, while Jonathan Ireland had 8 points for Danville.

Up next for Danville is a home contest on Tuesday night against Champaign Centennial. The JV game will tip off at 5 p.m. with the varsity contest tentatively set for 6:30 p.m. The game can be seen by going to the Danville Vikings channel on YouTube.