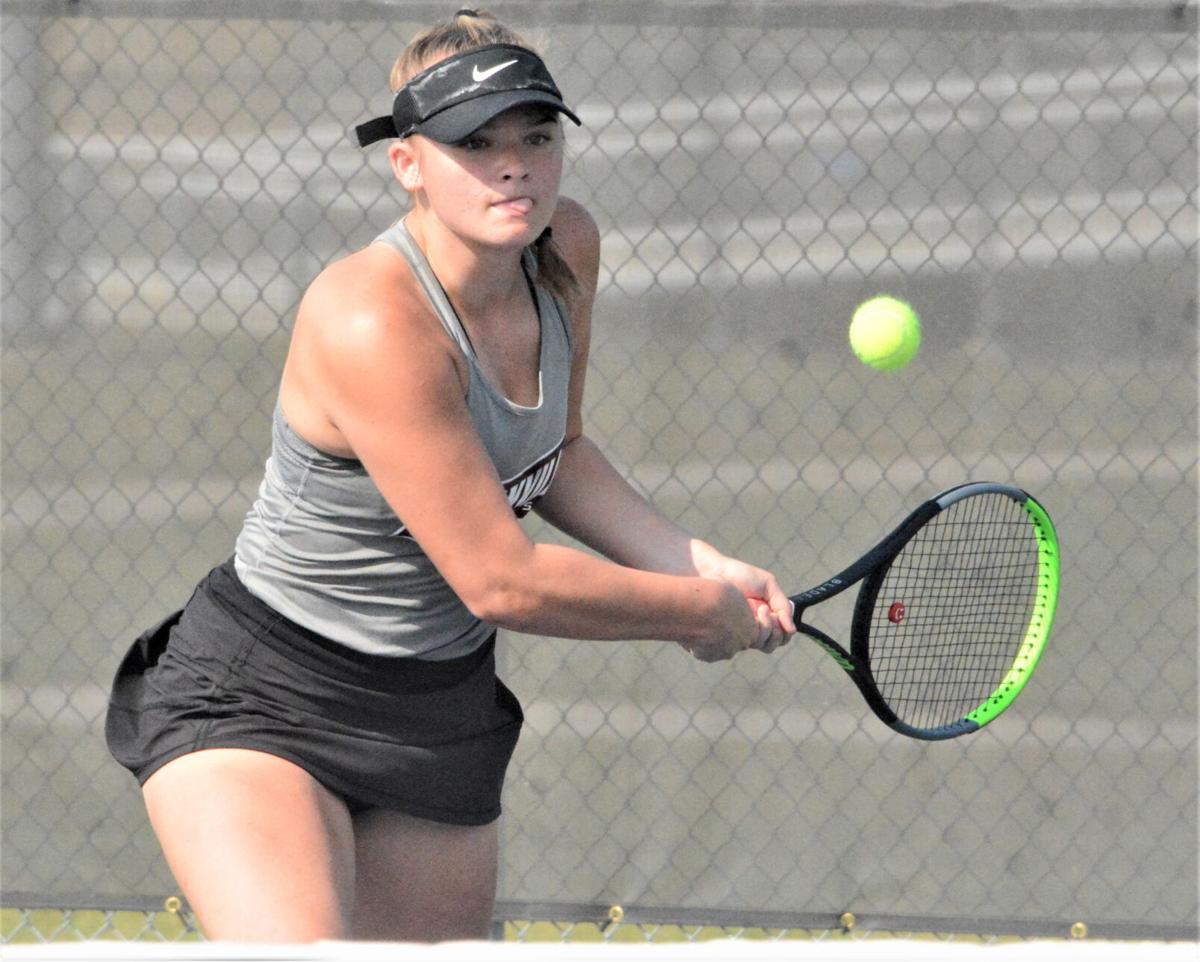 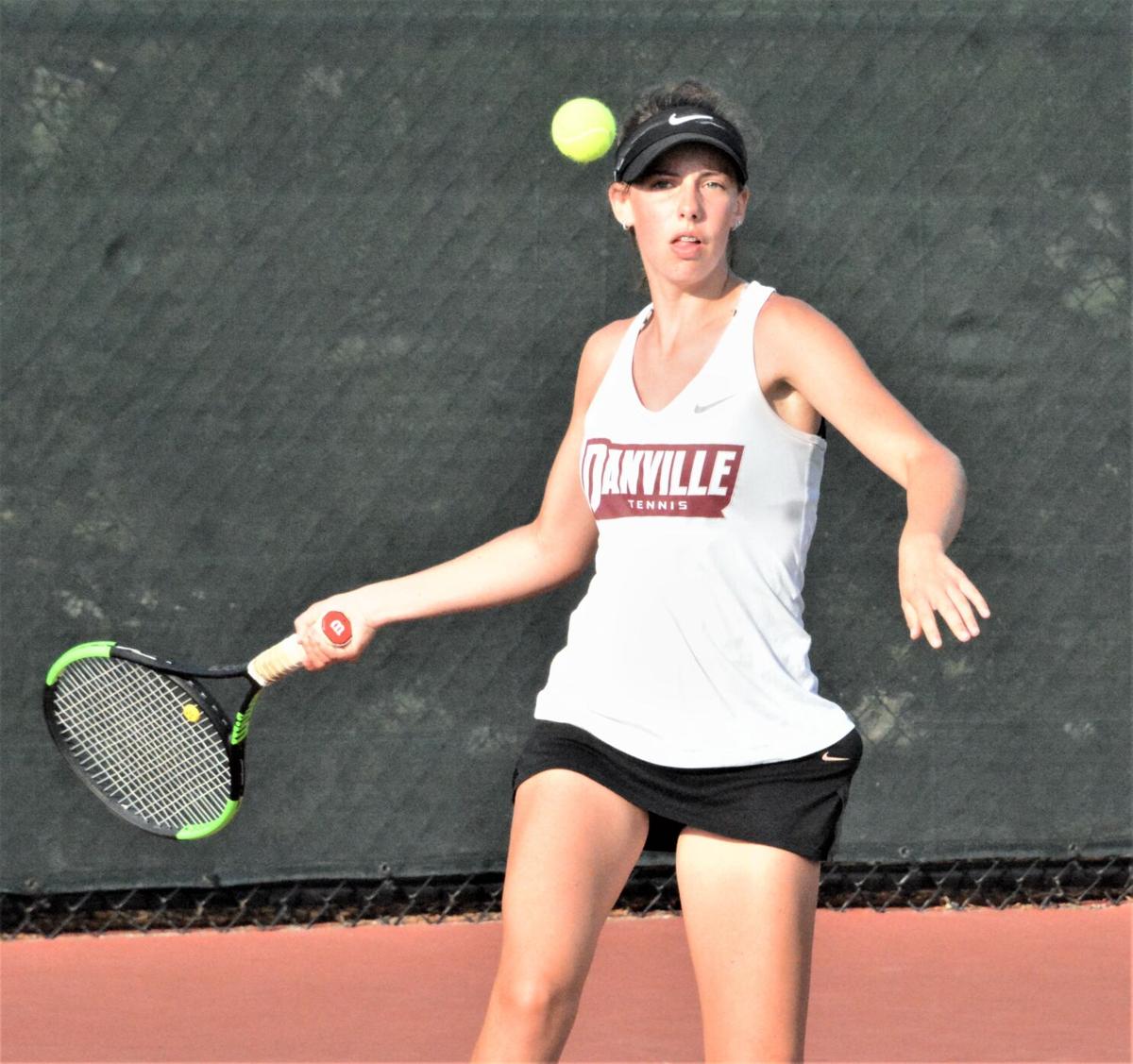 Danville sophomore Ava Towne prepares to hit a shot during her championship match at No. 3 singles in Saturday’s Big 12 Conference Tournament at McGraw Park in Bloomington.

Danville sophomore Ava Towne prepares to hit a shot during her championship match at No. 3 singles in Saturday’s Big 12 Conference Tournament at McGraw Park in Bloomington.

Houpt, who is in her first year with the Vikings, saw the results this weekend in the Big 12 Conference Tournament held in the Bloomington-Normal region.

Griffin rallied in the championship match at No. 5 singles to beat Bloomington’s Oviya Panneerselvam 1-6, 6-1, (10-4) at Normal Community High School.

“It was a tough one, for sure,’’ Griffin said. “I was not very happy after the first set loss, if we are being honest. Some teams were shed.’’

So how did Griffin regroup to win the final six games of the second set and the third-set tiebreaker?

“You just have to let it go. You can’t let your mind take over. That’s my biggest problem,’’ Griffin said. “It was deteriorating to lose six straight after winning the first one and then to lose one more to start the second set.

“You just have to let go of your head and play without it.’’

It wasn’t only a mental change for Griffin, who admitted she just started having more fun.

“I let myself be more consistent instead of going for points that I knew I wasn’t going to win,’’ Griffin added. “I started letting her make the mistakes instead of making them myself.’’

Once Griffin forced the third-set tiebreaker, she said it was only a matter of keeping the momentum.

“When you come back to win the second set, you know that you just need to keep playing like you have been,’’ she said.

Houpt, who was trying to follow her players at Bloomington High School, Normal Community High School and McGraw Park on Saturday, said that Griffin played some of her best tennis this weekend.

That includes Friday’s matches in No. 1 doubles where Griffin and Lexi Ellis finished fourth, but they gave the top-seeded team of Gabrielle Runyan and Mariel Runyan a battle in the semifinals before falling 7-5, 7-5.

“Lexi and I player our best against the Bloomington team,’’ Griffin said. “It showed us that we can play with one of the best doubles team in the conference.

“It just shows how much we have grown as a team.’’

“Ava and Josie were almost flawless,’’ Houpt said. “And then Ava came back today to upset the Centennial girl (Leah Luchinski) who beat her earlier this season.’’

The Vikings finished third in the team standings with 74 points, while Bloomington and Normal Community tied for the title with 82 points each.

“It was an interesting weekend,’’ Houpt said. “It was up and down. We were just a couple of wins here or there from winning this.’’

Danville, which doesn’t have a senior on its roster, could have won the title with a perfect 6-0 final round on Saturday, but the Vikings went 2-4.

“I would assume that we are the only team that doesn’t graduate a player,’’ said Houpt as Danville’s lineup is one junior, four sophomores and one freshman. “That’s really cool that we have the opportunity to bring all six back next year.’’

But before the Vikings start thinking too much about next year, they still have the IHSA Class AA Sectional this weekend in Pekin.

It will be the final weekend of the season as the COVID-19 pandemic has forced the IHSA to cancel this year’s state tournament.