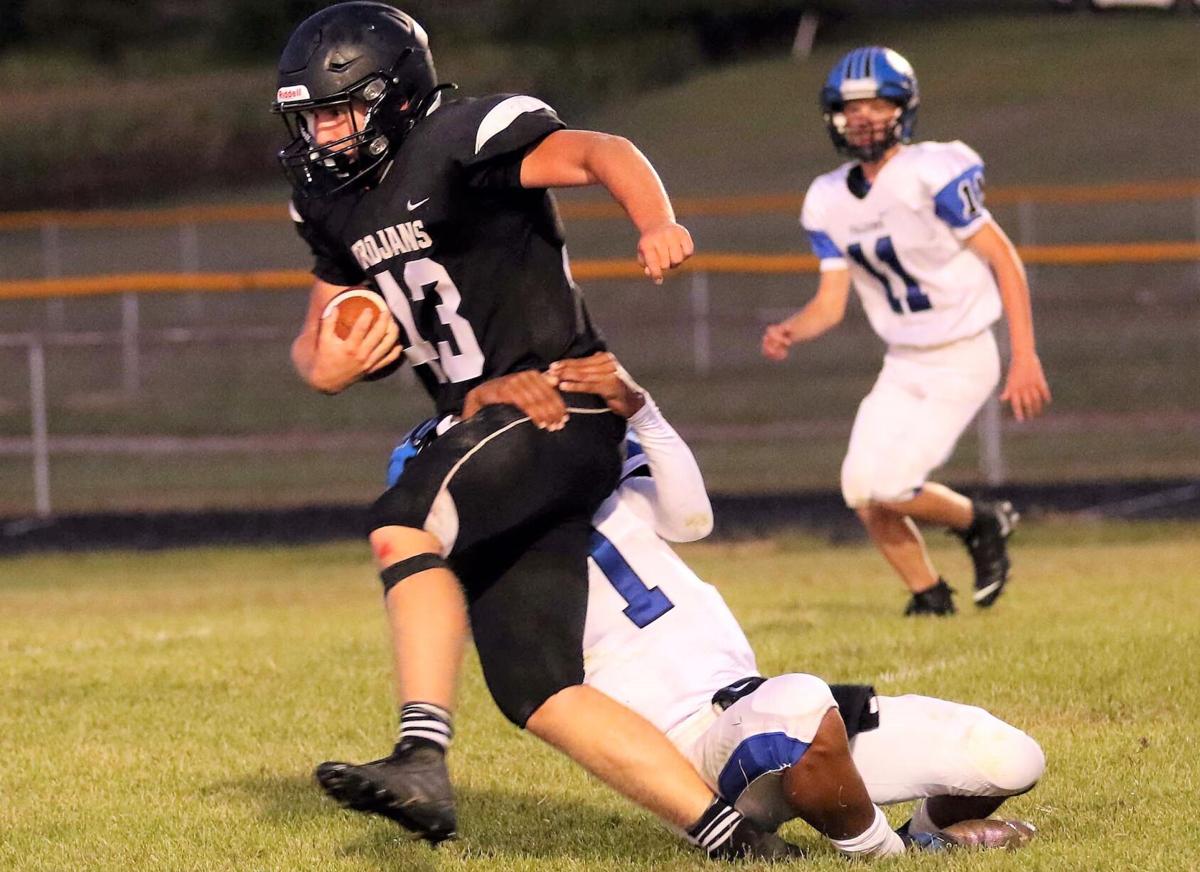 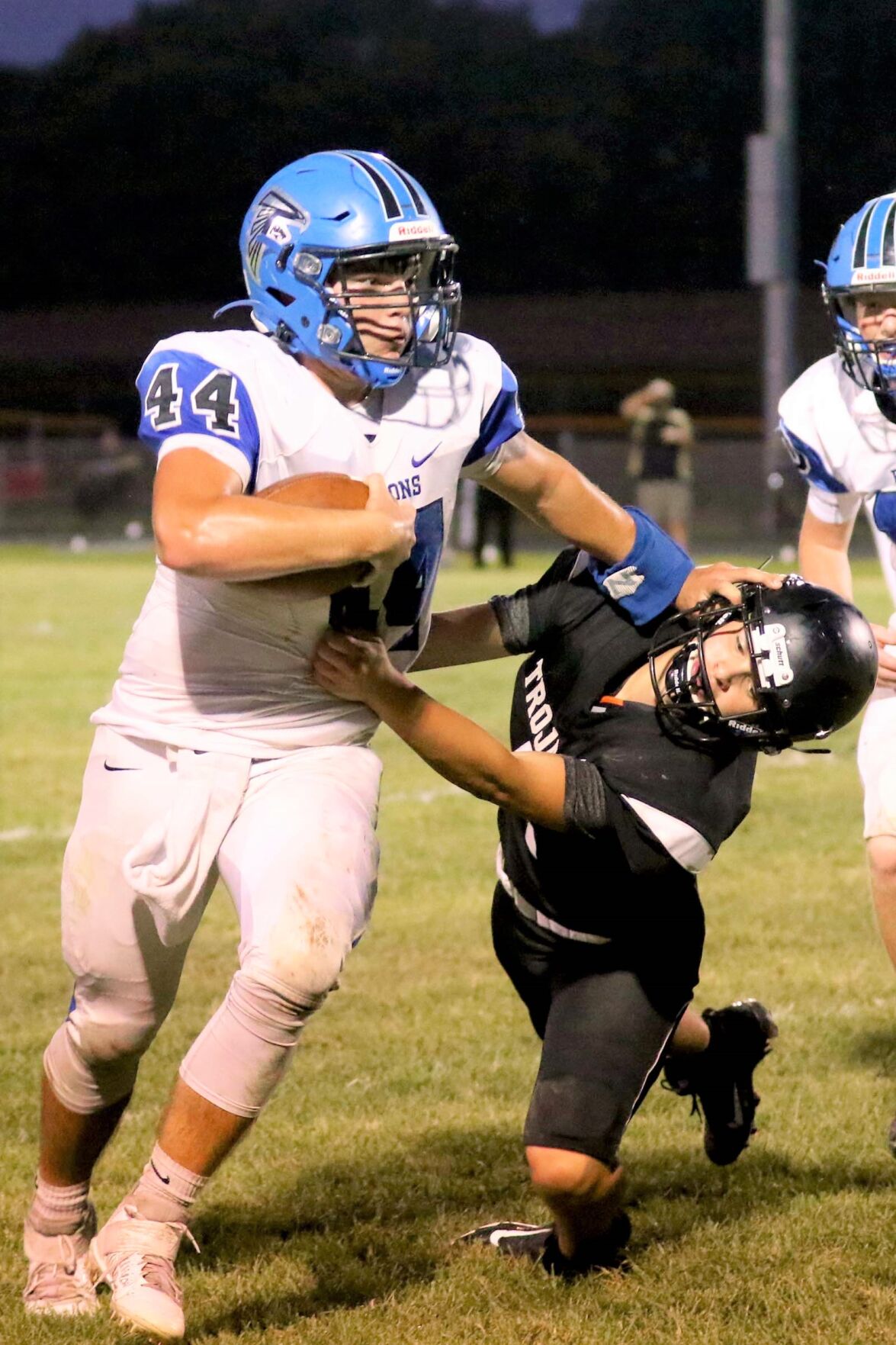 North Vermillion junior Carter Edney fends off a tackle attempt by Covington junior Wyatt Martin on his way to a 17-yard gain in the second half of Friday’s contest.

North Vermillion junior Carter Edney fends off a tackle attempt by Covington junior Wyatt Martin on his way to a 17-yard gain in the second half of Friday’s contest.

COVINGTON, Ind. — It would have been easy for both Covington and North Vermillion to enter Friday’s Wabash River Conference football game at the Trojan Sports Complex with poor attitudes.

That was definitely not the situation. Both the Trojans and the Falcons were excited thinking about that first win of the season.

And the game turned for Covington on one of the most exciting plays in the game of football. Duncan Keller’s interception and subsequent 65-yard interception return right at the halftime buzzer propelled the Trojans to a 52-22 victory over the Falcons.

“It’s hard to put into words but this victory really means a lot to our program,’’ said Covington senior lineman Alex Black. “Starting the season against some of the best teams in our league (South Vermillion and Parke Heritage) was rough. But coming out here tonight and putting 52 points on the board against a team that played for the state title a couple years ago (2018) means a lot.’’

But, how did the Trojans (1-2) overcome being outscored 96-20 in their first two league contests?

“It was absolutely hard to stay positive,’’ Black admitted. “We had our moments in those first two games, but we would make a mistake and that starts to wear on you.’’

Covington avoided some of those mistakes with no turnovers in the victory and the one that the Trojans forced turned a 20-14 game into a 28-14 halftime advantage.

“We have been preaching don’t flinch — believe in yourself, believe in each other and believe in what we are doing,’’ said Covington first-year coach Tyler Campbell. “We finally came out and put a whole game together.

“We are finally playing excited, fun and fast football.’’

That was never more evident that on Keller’s interception return for a touchdown where he eluded a couple of would-be tacklers and then make a sharp cut across the field to find the end zone.

“We got a sideline warning on that play because our kids were sprinting down the sideline, hoopin’ and hollering,’’ Campbell. said. “We looked like a team that was excited to be on the field — which is awesome.’’

But, why is that important?

“You need to be positive. We talk about being relentlessly positive all of the time,’’ Campbell said. “When you are excited, it’s hard to be negative. When you are excited, you get past your mistakes and play the next play. Your excitement will carry you through the rough times.

“And it’s a credit to these kids that they have been able to do that ... to get humbled in the first two weeks and still believe in what we are doing — that’s a huge testament to our kids.’’

That’s exactly what North Vermillion coach Brian Crabtree is trying to do as the Falcons had three freshmen in their starting lineup on Friday night.

“Even though we didn’t get the win, we got better this week,’’ Crabree said. “This is going to test our resiliency, but we are North Vermillion and we will continue to work with what we’ve got.’’

Crabtree took full blame for the interception thrown by Carter Edney in the final seconds of the first half.

“I have to do a better job of avoiding those situations,’’ he said. “It felt so good to be competing, I just wanted to compete a little more. We were in a game, why not be aggressive? We are 0-2 and been up against, so I probably took a risk that I didn’t needed to at that point.’’

The Falcons actually took the lead late in the second quarter (14-12) on a pair of touchdown runs by Edney, who rushed for 161 yards on 30 carries.

But, Covington quarterback Alan Karrfalt hooked up with Keller on a 30-yard touchdown pass with 33.9 seconds left until halftime to give the Trojans a 20-14 advantage. Three plays later and it was 28-14 at halftime.

“If you put guys in spots to be successful they will make plays for you,’’ said Campbell of Keller’s two scores in the final minute of the first half.

The Trojans rolled up 372 yards of total offense on Friday night. Karrfalt had a big role in that with 258 passing yards, while the junior ran for 25 on six carries. He finished the game with three rushing touchdowns and he threw for three more.

Keller finished with 106 receiving yards on six catches, while Asa Hohenstin had five receptions for 100 yards and Neil Ellmore had 30 yards rushing and 24 receiving yards to go with the game’s first score on a 6-yard pass from Karrfalt.

Next week, Covington will travel to Veedersburg, Ind. for a 7 p.m. contest against Fountain Central in a battle of county rivals. The Mustangs are scheduled to play their first game of the season at Frontier today.

North Vermillion is also on the road next Friday with a non-conference contest against the Linton-Stockton Miners, who improved to 2-1 with a 42-36 win over Monrovia.