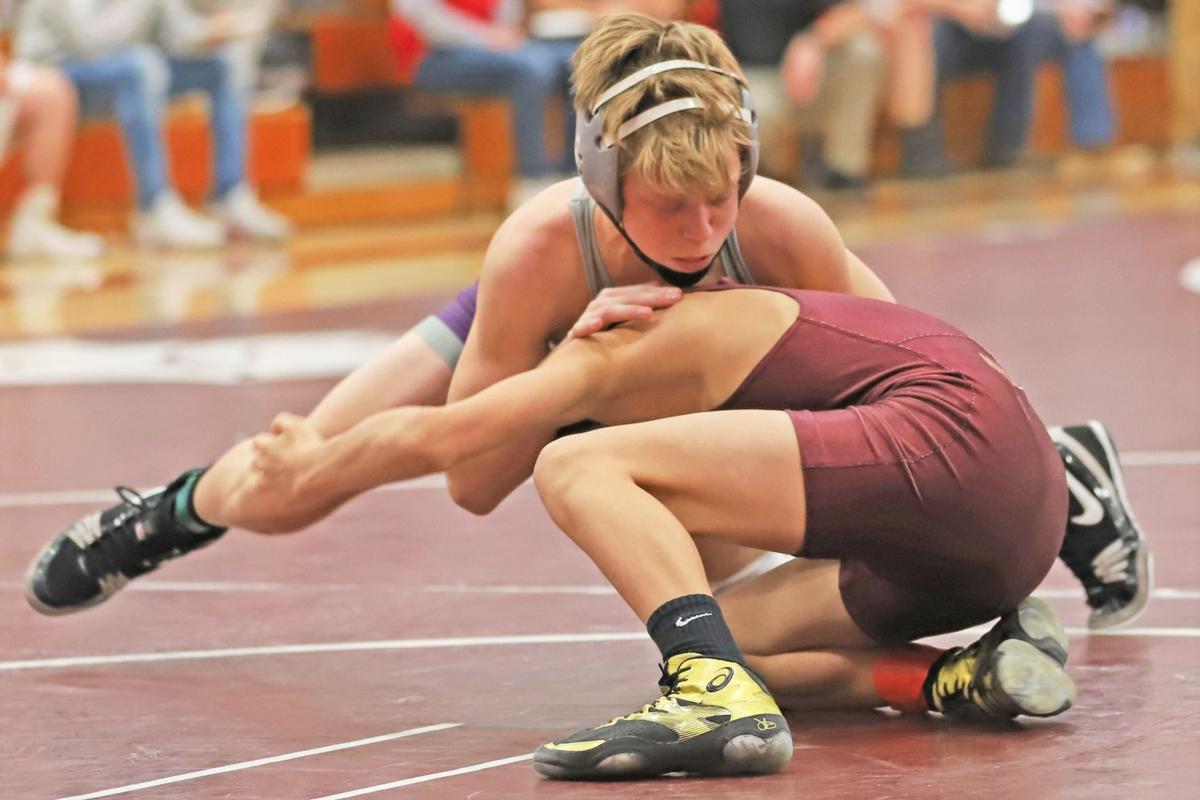 Oakwood freshman Reef Pacot works on pinning Clinton freshman Isaiah Reynolds during the 106 pound class of the IHSA Regional championships Satruday in St. Joseph. Pacot won his match and will wrestle in next week’s sectional at Stanford Olympia. 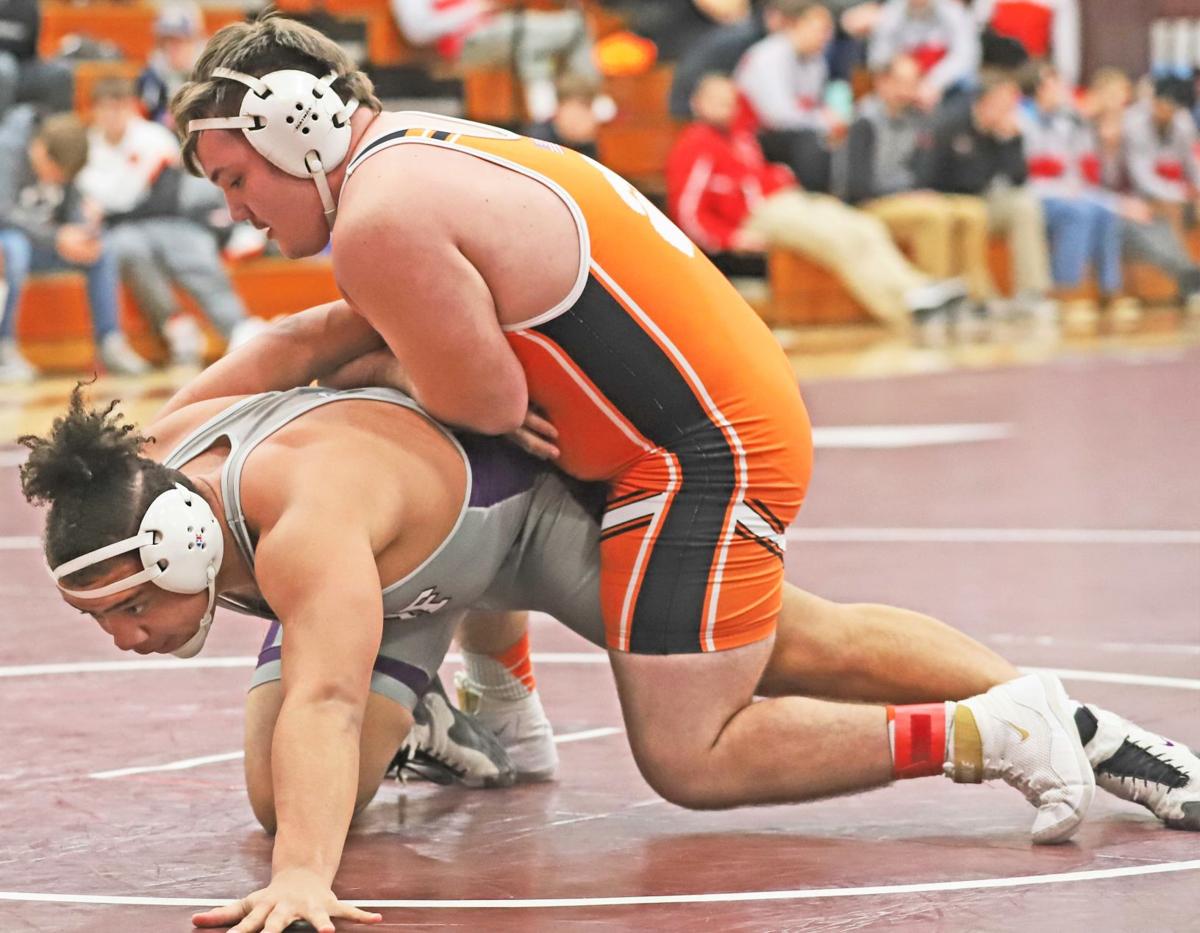 Westville junior Dawson Pruitt works on pinning Oakwood senior Caide Borden during the championship finals in the 220 division of the IHSA Regional Wrestling Tournament in St. Joseph on Saturday. Pruitt got the pin.

Oakwood freshman Reef Pacot works on pinning Clinton freshman Isaiah Reynolds during the 106 pound class of the IHSA Regional championships Satruday in St. Joseph. Pacot won his match and will wrestle in next week’s sectional at Stanford Olympia.

Westville junior Dawson Pruitt works on pinning Oakwood senior Caide Borden during the championship finals in the 220 division of the IHSA Regional Wrestling Tournament in St. Joseph on Saturday. Pruitt got the pin.

ST. JOSEPH — The Oakwood/Salt Fork co-op wrestling team has been turning heads all season with their impressive showings in dual meets and individual competitions.

The Comets qualified eight grapplers for next week’s sectional at Stanford Olympia, including two regional champions, but finished a mere half point behind regional winner Leroy at the 2020 IHSA Class 1A Regional on Saturday at St. Joseph-Ogden High School.

The two regional title winners, freshman Reef Pacot (106 pounds) and junior Gage Reed (113 pounds), bounded through their respective brackets on the way to the title. Pacot’s journey was a little bit easier with only four wrestlers in the bracket, but with his pedigree in the sport, it didn’t matter how many were in his weight class.

“I’ve been wrestling since I was in kindergarten, and wrestling teaches you so much about life. I like the challenge of going against guys that are ranked higher than I am because I want to strive to be the best,” Pacot said after stepping on the podium as the regional champion.

Pacot had just two matches, a fall in 4:15 over Garyson McBride of Westville and then a fall in 1:38 over Isaiah Reynolds of Clinton in the title match.

Reed’s journey was a little longer, having three matches on his way to the title. Reed defeated Jack Green of Leroy in a fall in 52 seconds in his first match, then had a technical fall over Chance Williamson of Heyworth to get into the title match. Reed won a 3-0 decision over SJO’s A.J. Wagner in what was one of the best matches in the smaller weight classes.

“We had a pretty successful day, but it didn’t end the way we wanted to. Still, we had quite a few guys move on and a couple seniors have extended their careers at least another week. Reef (Pacot) is a special person that comes from a great youth program. He should be fun to watch for the next three years,” Oakwood/Salt Fork head coach Mike Glosser said after the match about his team.

The Westville/Georgetown-Ridge Farm Tigers also advanced four wrestlers to next week’s sectional, including their anchors at the heavyweight positions Dawson Pruitt (220 pounds) and nationally ranked Hayden Copass (285). Copass had three falls en route to his title, while Pruitt had two pins and a 5-2 decision over Borden of Oakwood in the regional title match.

Copass, who was injured for the first half of the season, has returned with a vengeance, and hasn’t let his injury affect his quest for his goal, a state championship.

“While I was sidelined, I rode a stationary bike, but you can only do so much on one of those, and I was a little out of shape too, but I’ve gotten myself ready and prepared for a long postseason run,” Copass, the Wisconsin commit said after his title match about coming back strong from his injury.

Copass has also pushed Pruitt in the wrestling room, and according to Westville head coach Kirk Edwards, that has helped Pruitt immensely.

“Hayden told me that he was going to kick Dawson’s (Pruitt) butt every day in practice, and since he’s done that, Dawson has really responded. We had some losses that we needed to revenge and today was the day that we discovered that we can win matches when it’s tough,” Edwards said about his two grapplers at the top of the weight classes.

Also advancing to sectionals for Westville were Craig Johnson (170 pounds) and Rylee Edwards (182).

The Bismarck-Henning/Rossville-Alvin Blue Devils have long been a force in IHSA wrestling, and even though they only advanced two wrestlers to the sectional next week, the road for both were equally impressive.

Jacob Akins, who won the regional title with a 13-8 decision over previously undefeated Ty Baxter of Leroy, had a fall in 2:27 over Ethan Quattro of Heyworth and a technical fall over August Balsamello of Westville on his way to the championship match.

Marshall Gudauskas had a much more interesting route to his third-place finish, winning his first match by a fall in 1:17, then endured four matches in the consolation bracket, culminating with a pin in just 50 seconds over Ben Jessup of Oakwood for third and a berth in the sectionals.

“I’m really don’t know how to describe it (winning the regional title), but last year I took down someone that was ranked second in the state and then to do it again this year and gain a first-round bye in the sectional is beyond words,” Akins said regarding his match to win the title.

Football and wrestling go hand in hand and a lot of the moves that you make in wrestling can also be used on the football field, to some extent. Akins plays both, and according to B-H/R-A head coach Andy Head, is a pretty good wrestler as well.

“Jacob is one of those kids that could be down by a bunch of points and have something crazy happen to pull out a win in a match. He has such a great mentality that he is one that is never out of a match,” Head remarked about Akins and the intensity that he has as a wrestler.

Hoopeston Area also qualified two wrestlers for the sectional, as Abel Colunga won the title at 182 pounds with a pin at 4:20 over Edwards of Westville, while Justin Jones lost a tough 3-1 decision to Isaiah Immke of St. Joseph-Ogden.

Sectional action will begin this coming Saturday with the top four in each weight class advancing to the State Tournament, which will be held on Feb. 20-22 at the State Farm Center in Champaign.