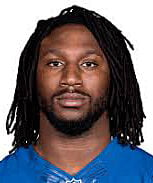 INDIANAPOLIS – When the Indianapolis Colts report to training camp next week, it promises to be an experience unlike any other.

It likely will be early August before players engage in on-field activities, rosters are expected to be capped at 80 players and there will be no preseason games to break up the monotony. That will make it difficult for players to make an impact, but CNHI Sports Indiana this week looks at five players with the most to prove when practices begin:

The 24-year-old safety had the fifth-year option declined on his rookie contract in March, making him a free agent after this season.

There have been moments of brilliance during Hooker’s first three years, including a one-handed end zone interception of new teammate Philip Rivers during last year’s season opener against the Los Angeles Chargers. He’s got seven career interceptions and set a career high with 51 tackles in 2019.

But he’s also missed 14 games with an assortment of injuries, and the Colts want to see fewer peaks and valleys in his play. Defensive coordinator Matt Eberflus saw several steps in the right direction last year, but Hooker must bring the same energy every day.

“He really was playing well at a very high level (for parts of 2019),” Eberflus said. “What he does, and what everybody else does has to do, is just be more consistent. If you are going to be a high-performing player, an All-Pro player or a high-performing starter, the consistency just has to be there, OK?

The 30-year-old cornerback likely needs little motivation after being cast aside by the Minnesota Vikings after seven seasons. He landed in Indianapolis on a one-year “prove-it” deal in large part because of his history with defensive backs coaches Jonathan Gannon and Alan Williams.

Injuries slowed Rhodes in the past two seasons, but he had just one interception and 13 passes defended in that span. He remains a physical presence – an important element for corners in the Colts’ defense – with 63 tackles a year ago, including five for a loss.

Indianapolis believes that hard-nosed play will be a good fit in its scheme and the presence of a few familiar faces could help Rhodes iron out the kinks in his game.

“He is a physical, really good tackler, and he has played at a Pro-Bowl level,” Eberflus said. “We are excited to get him back to that point.”

When the 25-year-old defensive lineman was selected in the second round in 2018, there were high expectations he could put consistent pressure on quarterbacks from the interior and off the edge.

Instead, injuries and inconsistency have limited Lewis to just 17 regular-season appearances and two career sacks. He’s now in danger of being left behind in a deep position group that added all-pro defensive tackle DeForest Bucker in a trade with the San Francisco 49ers, defensive tackle Sheldon Day as a free agent and defensive tackle Robert Windsor in the draft.

It’s a similar spot to the one 2017 second-round pick Quincy Wilson found himself in last year before he was traded to the New York Jets in April.

“What I told Tyquan was, this is a big year for him,” general manager Chris Ballard said in January. “We’re going to expect him to come in and really show what we think his talent level is. Where we end up playing him, we see him as a guy who can play both at end and inside, and he’s got to be able to give that to us.”

A training camp star last summer, the 24-year-old wide receiver lost his entire 2019 season to a gruesome ankle injury suffered during an August joint practice with the Cleveland Browns.

A fifth-round pick in 2018, Fountain now must prove he’s healthy and can be productive without the benefit of snaps in exhibition games. That won’t be easy on a suddenly crowded depth chart that added Michael Pittman Jr. and Dezmon Patmon in the draft and saw Zach Pascal and Ashton Dulin (on special teams) make surprising impacts on the roster last year.

The situation is far from dire for the 23-year-old wide receiver, but he must translate his elite speed and vast potential to the playing field.

That proved to be impossible in 2019 when an array of injuries cut his rookie season to just seven games. Campbell joins Pittman Jr. as young building blocks at a position group that long has sought a consistent sidekick for veteran T.Y. Hilton.

And he still has plenty of support in the front office.