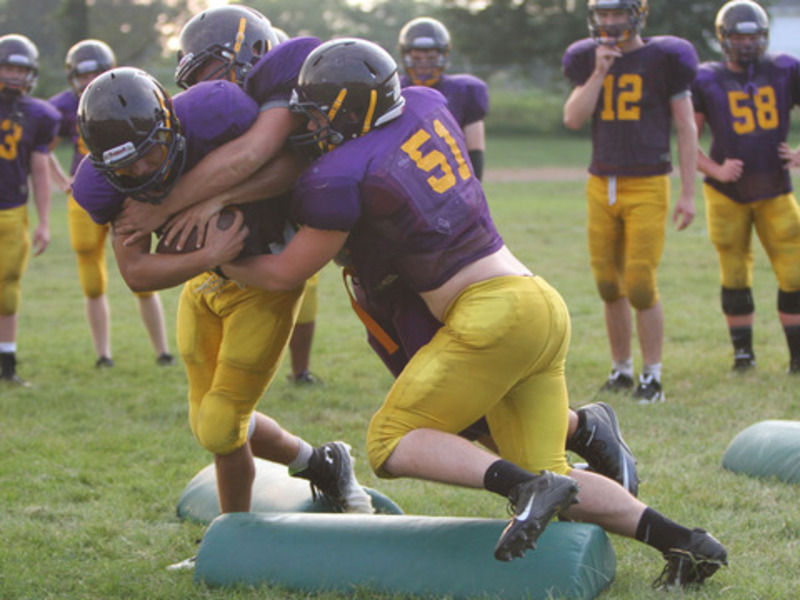 Georgetown-Ridge Farm/Chrisman ball carrier Dylan Bina gets tackled by Colby Roberson (51) and Skylar Austin (in rear) during a practice earlier this week in Georgetown. The Buffaloes start the season on Aug. 30 against Decatur Lutheran. 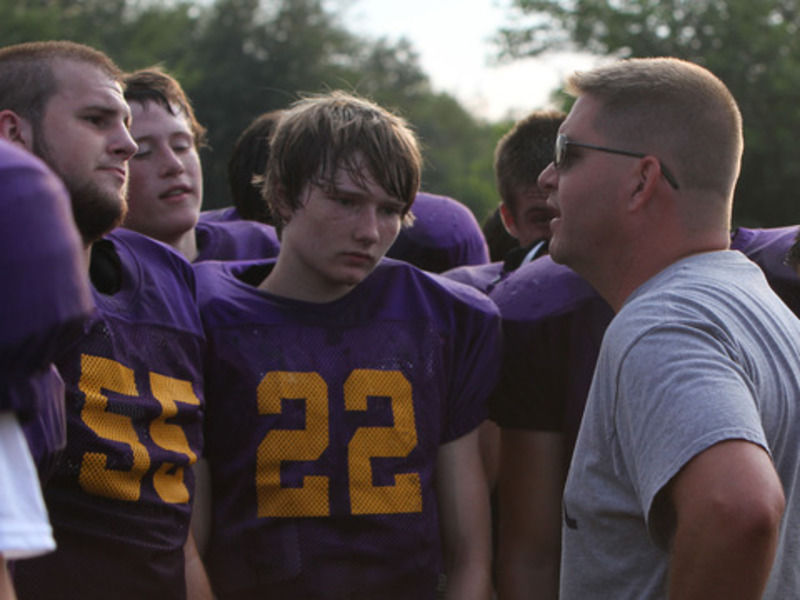 Georgetown-Ridge Farm/Chrisman ball carrier Dylan Bina gets tackled by Colby Roberson (51) and Skylar Austin (in rear) during a practice earlier this week in Georgetown. The Buffaloes start the season on Aug. 30 against Decatur Lutheran.

The Georgetown-Ridge Farm/Chrisman Buffaloes are in full swing of summer practice and there’s quite a lot of competition going on.

“We want our guys to compete every play and get better.” Buffaloes coach Josh Cavanaugh said. “We have a quarterback battle going on and some battles on the offensive line. The guys are going to have to compete for those spots. “

Battling for the spot of quarterback are junior Rylee Goodwin and sophomore Ethan Silva. Last year Goodwin was the starter.

While a few positions on offense are up for grabs, others are nearly locked in. On the line, Matt Willaman, Dakoda Chapman and Clayton Roberson will all be returning starters. Dylan Bina and Troy Rodriguez will be the core of the running game once again while senior Andy Nicholson will start at wide receiver.

“Doing what we do, it’s nice to have the guys we have returning,” Cavanaugh said.

Nicholson is also the only four senior on the roster and has emerged as one of the team’s leaders.

“All of the seniors really just try to lead by example,” Nicholson said. “Go hard every play and get the job done.”

On defense the Buffaloes have a few positions to be decided but all four linebackers look to return. Bina, Roberson, Chapman and Matt Penry will be filling those roster spots. In the secondary, Dylan Mills and Nicholson will be roaming and Tyler Hart who was primarily a linebacker last season, will be playing on the defensive line.

This offseason, players at every position have been in the weight room trying to get bigger, faster and stronger. When practices officially began the work moved outdoors, but according to Coach Cavanaugh there has been one major issue.

“The weather has been way too nice.” Cavanaugh said tongue in cheek. “Finally we’re just starting to get some good, hot football practice weather.”

Georgetown-Ridge Farm/Chrisman is coming off a 6-3 season in 2012. While last year was certainly a good year, the team is focused on consistently improving.

“We want to get better every day,” Cavanaugh said. “Our guys’ motto is ‘good enough isn’t good enough’”

Nicholson has already seen improvements from last year’s team to this year’s squad.

“I feel like we are ahead of where we were this time last year.” Nicholson said. “We’re conditioning more which was an issue last year but we’re also playing more like a family and with more leadership from the older guys.”

The Buffaloes will be playing their varsity versus junior varsity scrimmage on Friday night. Then after a week’s worth of school and practice, the Buffaloes will host Decatur Lutheran. GRFC has a total of six home games this fall including matchups against Oakland, Hoopeston Area, Oakwood/Armstrong-Potomac, Milford/Cissna Park and Bismarck-Henning.