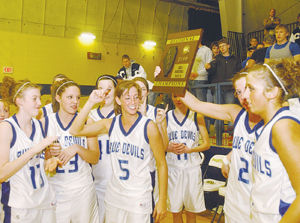 The Lady Blue Devils of Bismarck-Henning celebrate their win over Clifton Central during the Class 2A Regional Championship Game at Paxton-Buckley-Loda High School. 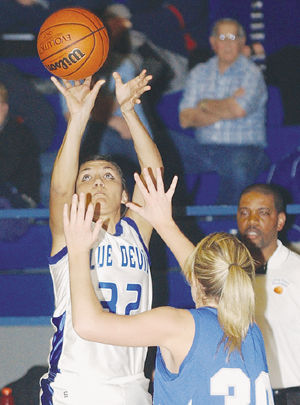 Bismarck-Henning's Jessica Brito shoots from the outside over the reach of Central's Lauren Mathy during Thursday night’s Class 2A girls regional championship game at Paxton.

The Lady Blue Devils of Bismarck-Henning celebrate their win over Clifton Central during the Class 2A Regional Championship Game at Paxton-Buckley-Loda High School.

Bismarck-Henning's Jessica Brito shoots from the outside over the reach of Central's Lauren Mathy during Thursday night’s Class 2A girls regional championship game at Paxton.

Bismarck-Henning junior Jessica Brito didn’t think twice about shooting a contested 3-pointer from the right wing. The Blue Devils were clinging to a one-point lead and her team had failed to score four straight possessions. With a shooter’s confidence, Brito rose up and drilled the shot helping Bismarck-Henning claim its second straight Class 2A Paxton-Buckley-Loda Regional title with a 52-49 win over Clifton Central. “I was kind of feeling my shot, because I had taken one earlier that got waved off,’’ said Brito as two possessions earlier teammate Kristen Tuggle had gotten called for an illegal screen. “I knew I could drain one, and I knew we needed it. “My teammates got me the ball, they got me open and I just made the shot.’’ Tuggle, who made the inbounds pass on the play, said it didn’t surprise her that Brito made that shot. “That was crazy because she had like three defenders on her,’’ Tuggle said. “But, she has thrown up a lot of crazy shots that have gone in. She is good at them.’’ Even with Brito’s big shot with 1 minute, 58 seconds left, Bismarck-Henning (28-3) still had to make a few more big plays down the stretch. “That was a real momentum play for us,’’ said Bismarck-Henning junior center Jeni Free. “We knew from that point, that we could do this. This is our regional, and we are the defending champs.’’ Clifton Central coach Henry Hines could believe it when Brito hit that shot. “To me that was the turning point of the game,’’ Hines said. “I told my team that it was a bad shot — but it went in. “She was closely guarded on that one, and we didn’t closely guard here too many times, but she was closely guarded on this one and she nailed it. That was clutch.’’ As was the defense the Blue Devils played in the final 14 seconds. Bismarck-Henning senior Hannah Ohl made just 1-of-2 free throws with 14.4 seconds left giving her team a two-point lead (51-49). The Comets, who end their season at 23-8, had pulled within one on a 3-pointer from Alysia Mayes on their previous possession. This time down the court, Free stepped in front of and intercepted a pass intended for Mayes on the 3-point arc. “We knew it was either going to be (Melissa) Garner or Mayes on that shot,’’ Free said. “Those are their main players. She already hit one (3-pointer) on me, and I knew if she made another we would be in real trouble. “I just went out there and kept her from getting the ball.’’ Once again, Ohl made 1-of-2 free throws and a desperation 3-pointer from Mayes was off the mark from about 35 feet. “The only way that we were going to put these guys away was to hear that buzzer sound,’’ Bismarck-Henning coach Mike Stephens said. “Because every time, it seemed like we had them put away, they would hit a shot and come back on us. “I really felt like Clifton Central played extremely hard tonight.’’ It was a lot different than the previous time these two teams met when Bismarck-Henning beat Clifton Central 62-39 on Nov. 22. “This is the postseason, everyone plays a lot harder in the postseason than they do in the regular season,’’ said Brito, who finished with a team-high 15 points, five assists and three steals. “Everyone comes out stronger and the games are always more intense. “The key for us was we didn’t get too wound up in the swings. We did what we had to do to win the game.’’ Hines said Thursday’s game against Bismarck-Henning was the best his team played all season as Mayes scored a game-high 19 points to go along with nine rebounds and Gardner finished with 11 points and three assists. Both Brito and Tuggle felt a deciding factor for the sixth-rated Blue Devils was their defense. “Our pressure defense the entire game allowed us to win this one,’’ Brito said. “It’s what we do every day in practice.’’ Bismarck-Henning forced Clifton Central into 24 turnovers, and those offensive miscues led directly to 20 points for the Blue Devils. Tuggle had a pair of breakaway layups after Comet turnovers in the third quarter. “I think those fastbreaks we got off of their turnovers really fueled us,’’ said Tuggle, who finished with 14 points, three rebounds and three steals. The Blue Devils won in spite of making just 9-of-18 free throws. “We made just enough,’’ Brito said. “That’s something we are going to have work on before our next game,’’ said Free. Up next for Bismarck-Henning is a sectional semifinal contest against the top-rated Bloomington Central Catholic Lady Saints on Monday at Champaign St. Thomas More. “We are extremely proud of these kids for winning back-to-back regional titles,’’ Stephens said. “It’s very hard to win a regional title. I think I had a stretch of five years where we were in the championship game and couldn’t get one.’’