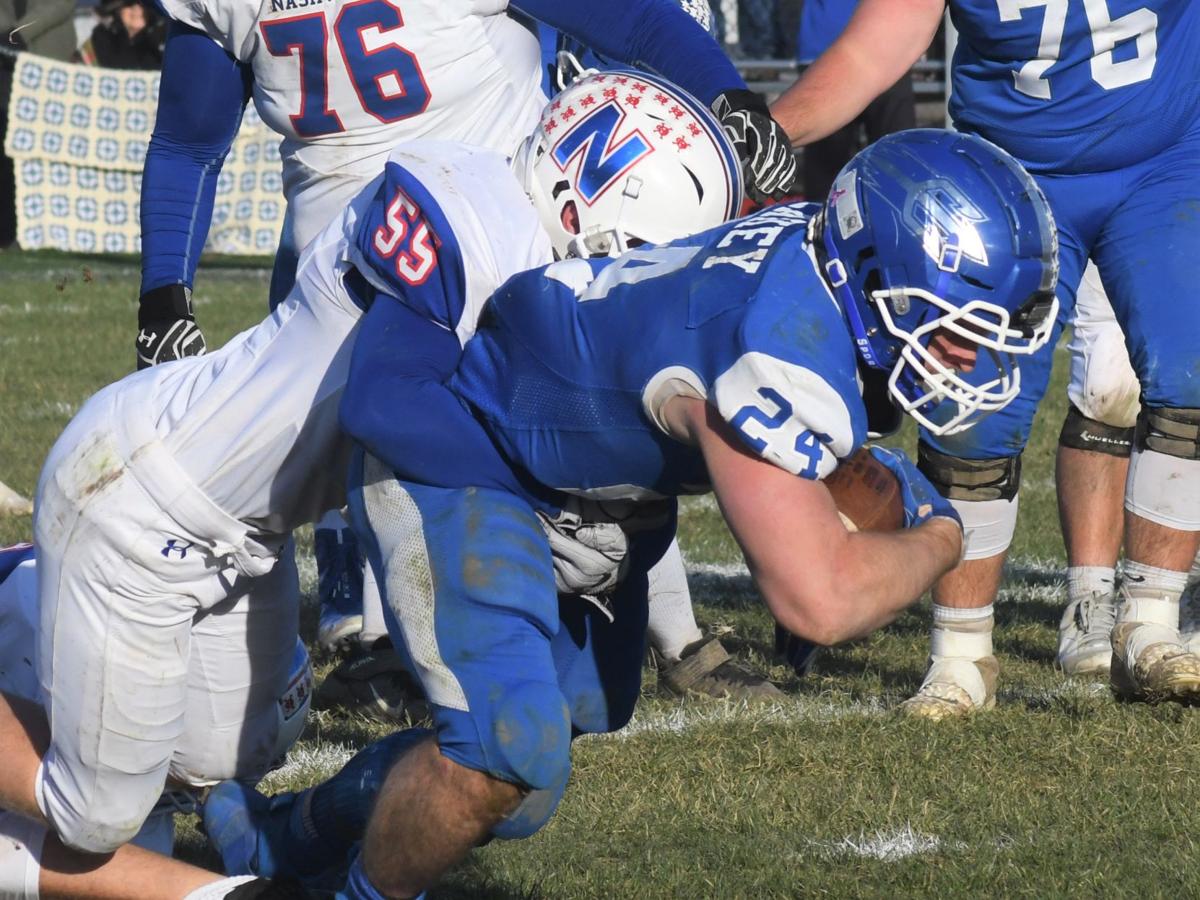 Nashville’s Justin Aulds grabs Bismarck-Henning/Rossville-Alvin’s Caleb Lahey to bring him down in the second quarter of Saturday’s IHSA Class 2A playoff game at Bismarck. Lahey had 99 yards and two touchdowns, but the Blue Devils lost the game 28-14. 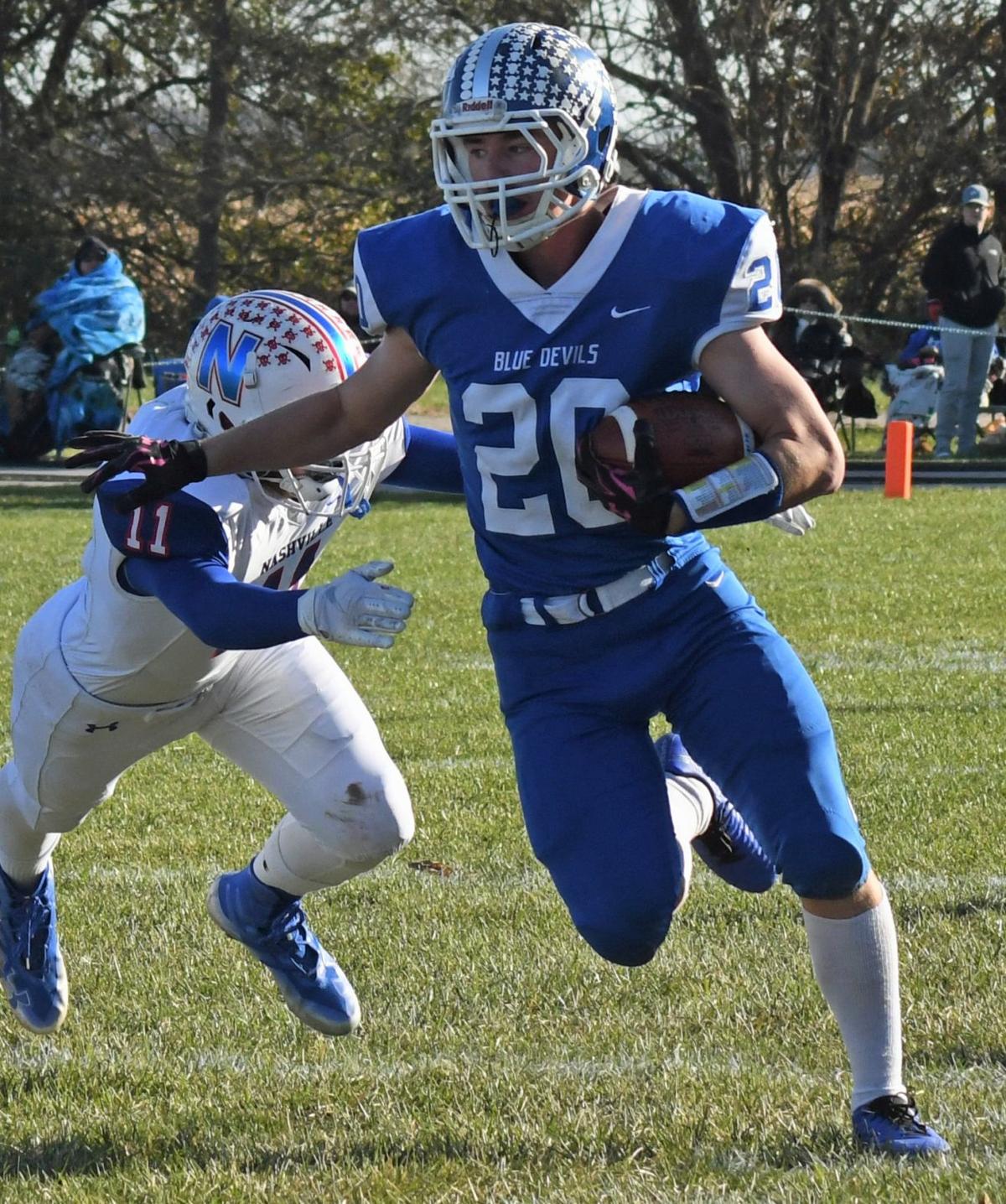 Bismarck-Henning/Rossville-Alvin’s Jacob Akins runs with the ball in the first quarter while Nashville’s Jackson Aulds gets ready to tackle him Saturday afternoon at Bismarck.

Nashville’s Justin Aulds grabs Bismarck-Henning/Rossville-Alvin’s Caleb Lahey to bring him down in the second quarter of Saturday’s IHSA Class 2A playoff game at Bismarck. Lahey had 99 yards and two touchdowns, but the Blue Devils lost the game 28-14.

Bismarck-Henning/Rossville-Alvin’s Jacob Akins runs with the ball in the first quarter while Nashville’s Jackson Aulds gets ready to tackle him Saturday afternoon at Bismarck.

BISMARCK — Sometimes reaching the end of the road is not an easy thing.

The Bismarck-Henning/Rossville-Alvin Blue Devils saw their run toward an IHSA Class 2A State title come to an end as they were defeated by the Nashville Hornets 28-14 in a second-round game on Saturday afternoon in Bismarck.

Nashville jumped ahead early as quarterback Cole Malawy hit Gavin Baldwin for a three-yard touchdown pass just three minutes into the game. The much more physical Hornets posed a problem size-wise for the Blue Devils, as head coach Mark Dodd eluded to after the game.

“They (Nashville) are pretty stout and they are well-coached up front, and we kept trying to mix it up between spreading it out and running between the tackles. We gave them a few chances on turnovers as well, which you cannot do to a team of their caliber,” Dodd said after the game on the size of Nashville and his team’s miscues.

Caleb Lahey got the Blue Devils even with a one-yard plunge late in the first quarter, and then Blue Devil signal caller Avery McConkey called his own number from one-yard out, giving BHRA a 14-7 lead shortly before the half.

Baldwin scored from one yard out for the Hornets, tying the score at 14 just before the teams went into the halftime locker room.

Lahey, who played his final game for the Blue Devils, finished with 26 carries for 99 yards and the pair of scores. Lahey has been known as that running back that goes between the tackles, and in his three years as a starter for BHRA, has helped his team get to the playoffs in each of those seasons.

“For some reason, it just didn’t work out for us today, and that’s unfortunate. We’ve built a bond and these guys are my brothers, and I just hope that we can be role models for the younger groups coming behind us,” Lahey said following the game on the outcome and the legacy that he will leave once he walks off the field for the final time.

The Blue Devils weren’t much of a passing team this season, but against Nashville, McConkey completed 9-of-19 passes for 80 yards. McConkey threw a costly interception early in the fourth quarter as he was driving his team toward the goal line, but the turnover basically sealed the game for the Hornets.

“We gave it all we had and left everything out on the field today. Football changed me these past few years because I’ve been able to be a positive influence on so many people, which is one of the highlights of my life thus far,” McConkey remarked about how the game of football has influenced his life.

Bismarck-Henning/Rossville-Alvin sees their season end at 9-2, and with this group of seniors leading the program the past few years, there are some holes for Dodd to fill next season. The Blue Devils did start several sophomores and juniors, so a return to the playoffs is a definite possibility next season.

“Our seniors have given us four years of dedication to the program and we’ll love those guys forever and they will always remain a part of the Blue Devil program long after they’re gone,” Dodd added about his seniors that exit the program.

Nashville, who improves to 10-1 overall with the win, was led on offense by Malawy, who completed 19 of 27 passes for 224 yards and a pair of touchdown passes. Connor Gladson also had a good day running the football, carrying the ball 15 times for 61 yards and a 5-yard run for a score.

Nashville advances to the Class 2A quarterfinals next Saturday, and will host No. 1 seed Pana, who defeated Oakwood 47-20 on Saturday in Pana.