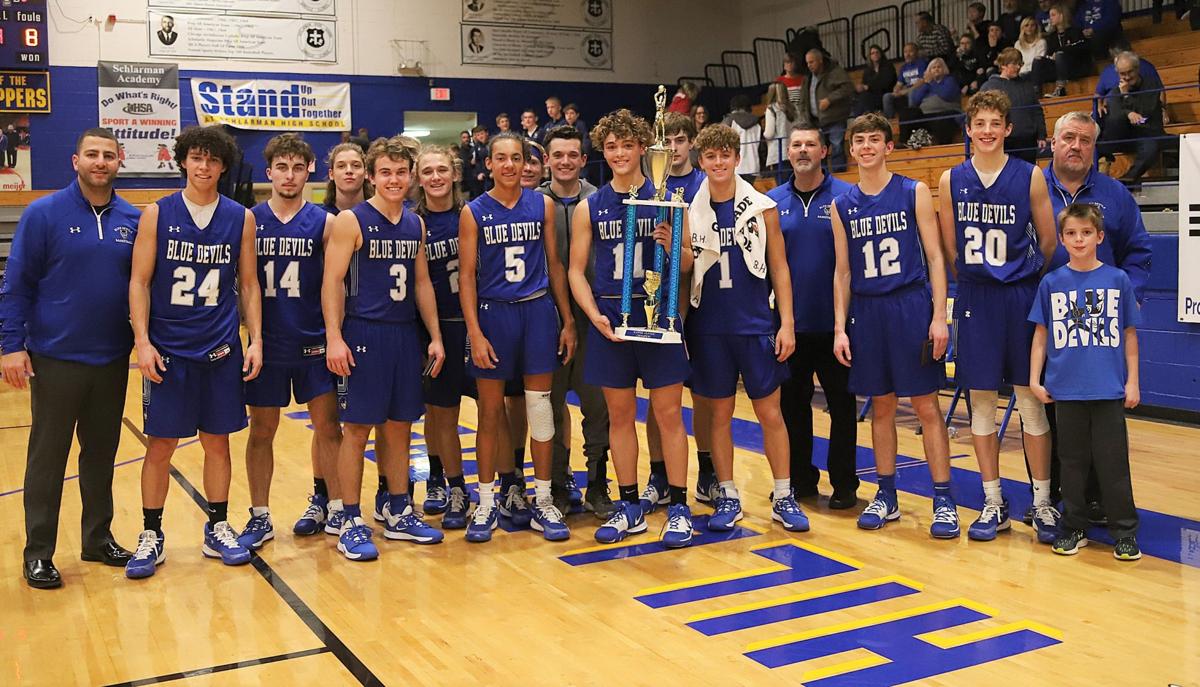 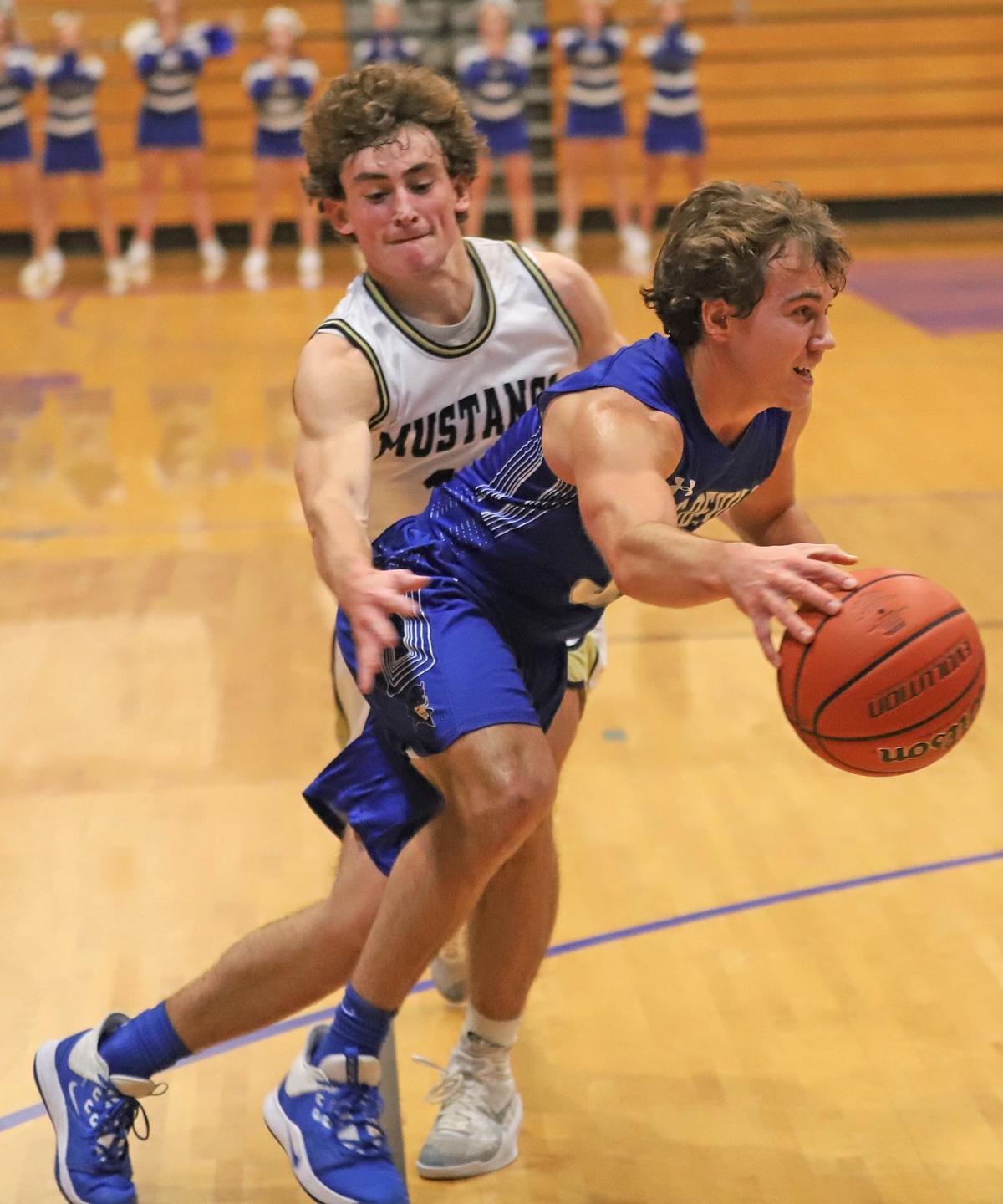 Bismarck-Henning Rossville-Alvin senior Drew Reifsteck drives around Fountain Central junior Carson Eberly during the first half of their championship game in the Topper Classic Saturday evening in Paul Shebby Gymnasium at Schlarman Academy.

Bismarck-Henning Rossville-Alvin senior Drew Reifsteck drives around Fountain Central junior Carson Eberly during the first half of their championship game in the Topper Classic Saturday evening in Paul Shebby Gymnasium at Schlarman Academy.

The Blue Devils capped off their successful opening tournament with a 64-48 win over the Fountain Central Mustangs.

“Well, we were a little flat coming out. We were not very focused at the beginning of the game. We had played well up to that point,” BHRA head coach Gary Tidwell said.

“We were not handling the ball very well and I have to give credit to Fountain Central for that. Overall I thought our effort in the second half was good. We were able to get some breathing room in the early part of the second half.”

The Blue Devils came out in the first quarter struggling to get anything going offensively. Struggles with ball-handling led to the Blue Devils to just 13 points in the quarter, seven of which were from Reifsteck.

Luckily for the Blue Devils, the Mustangs were unable to take advantage of turnovers and finished the quarter with eight points, five of which were from senior Ray Duncan.

A large part of the Mustang’s struggles were due to the strong press that the Blue Devils ran on nearly every play.

“That is one of our strengths. We created some turnovers and pull away,” Tidwell said.

“We work on press at practice, but it is hard to emulate that. They are in a system that they believe in and works for them,” Shabi said. “I thought we did a better job of keeping our composure in the second half.”

Coming out in the second quarter, the Blue Devils found the hot hand. Having more success finding and creating openings, Reifsteck popped off for a game-high 13 points in the quarter.

Tidwell saw his team use their ball handling to put them up 35-17 at the half.

“We had better ball movement. Drew was able to get to the basket and create some things off the dribble. We had a pretty good balance in that second quarter,” Tidwell said. “Our man pressure got us some turnovers and changing the pace was key for us.”

Breaking out after halftime, junior Elijah Tidwell caught fire beyond the three-point arc, shooting 3-4 in the third quarter. Tidwell finished the game with 12 points on 3-6 three-point shooting while going 0-1 from field goal range.

With three seconds left in the third quarter, the Blue Devils drew up a play for Tidwell. Coming off a screen he was given the rock and let it fly. The buzzer signaling the end of the quarter bet the ball into the basket, giving the Blue Devils a 50-30 lead.

“That was a set play. With three seconds left, we knew we could get a quick hit in the corner and he came off the screen well and hit it,” (Gary) Tidwell said.

With a substantial lead, the Blue Devils played most of the fourth quarter without their starters.

“They have multiple kids that can knock down shots. They are very experienced and they play with extreme effort and intensity. Really well-coached and played really well,” Shabi said.

A late comeback was needed for the Milford boys basketball team to overcome the Schlarman Academy Hilltoppers 52-47.

Despite trailing for most of the game, the Bearcats locked in late in the fourth quarter to complete the comeback. Filling in for head coach David Caldwell, assistant coach Joe German led the Bearcats to victory.

German saw the Toppers getting a big lead early due to them forcing the Bearcats to play to their fast pace.

“We let Schlarman dictate what we did offensively and defensively. We forced a lot of passes and let them do what they wanted,” German said.

But he saw his team find their groove late.

“We started taking care of the ball better. We looked down low,” German said. “Trace Fleming was big for us in the second half. He was huge for us getting those down low points.”

Fleming played a large role in that final quarter. After seeing limited floor time due to foul trouble, German unleashed him in the fourth quarter.

The move paid off as Fleming led the Bearcats back with 10 fourth-quarter points. 10 of Fleming’s 18 points came in the final quarter.

“He was aggressive in the post,” German said. “He was doing really well getting really wide and really big and getting the ball.”

The slow pace allowed the Bearcats to find their footing and more importantly limited the Toppers to just seven fourth-quarter points.

“We got aggressive on defense in the fourth. We started moving our feet better and snagging passes,” German said. “Our defense was much better late.”

Watson saw his team’s collapse come in the final minutes of the fourth.

The Bearcats continued to surge in the final two minutes. Fleming tied the game and eventually took the lead on back to back drives both on short floaters.

Schlarman senior Cole Carnahan and Milford junior Trey Totheroh both were selected to the All-Tournament team.

“Cole played great. A senior this year he did what he was supposed to as a senior leader,” Watson said. “We are looking for him to be our senior leader and playmaker to lead us to victory.”