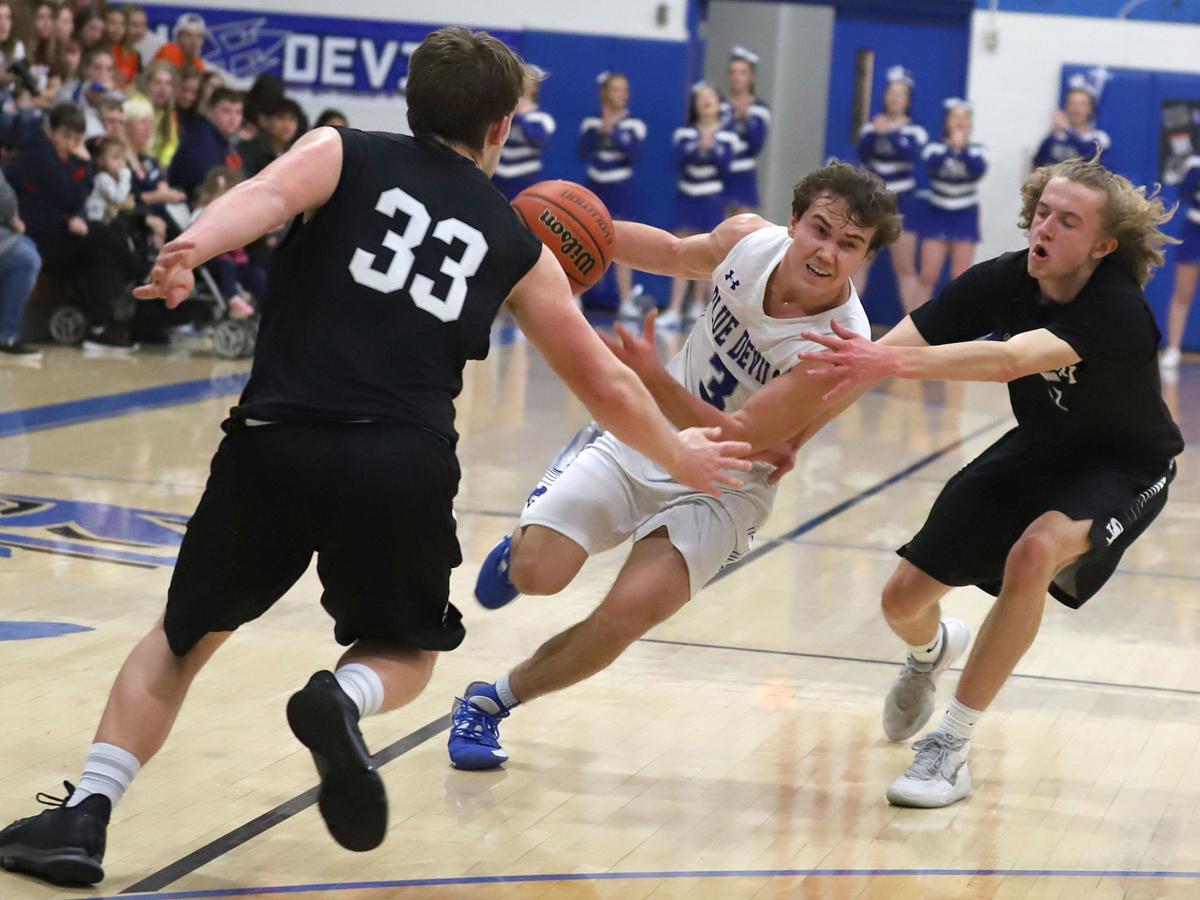 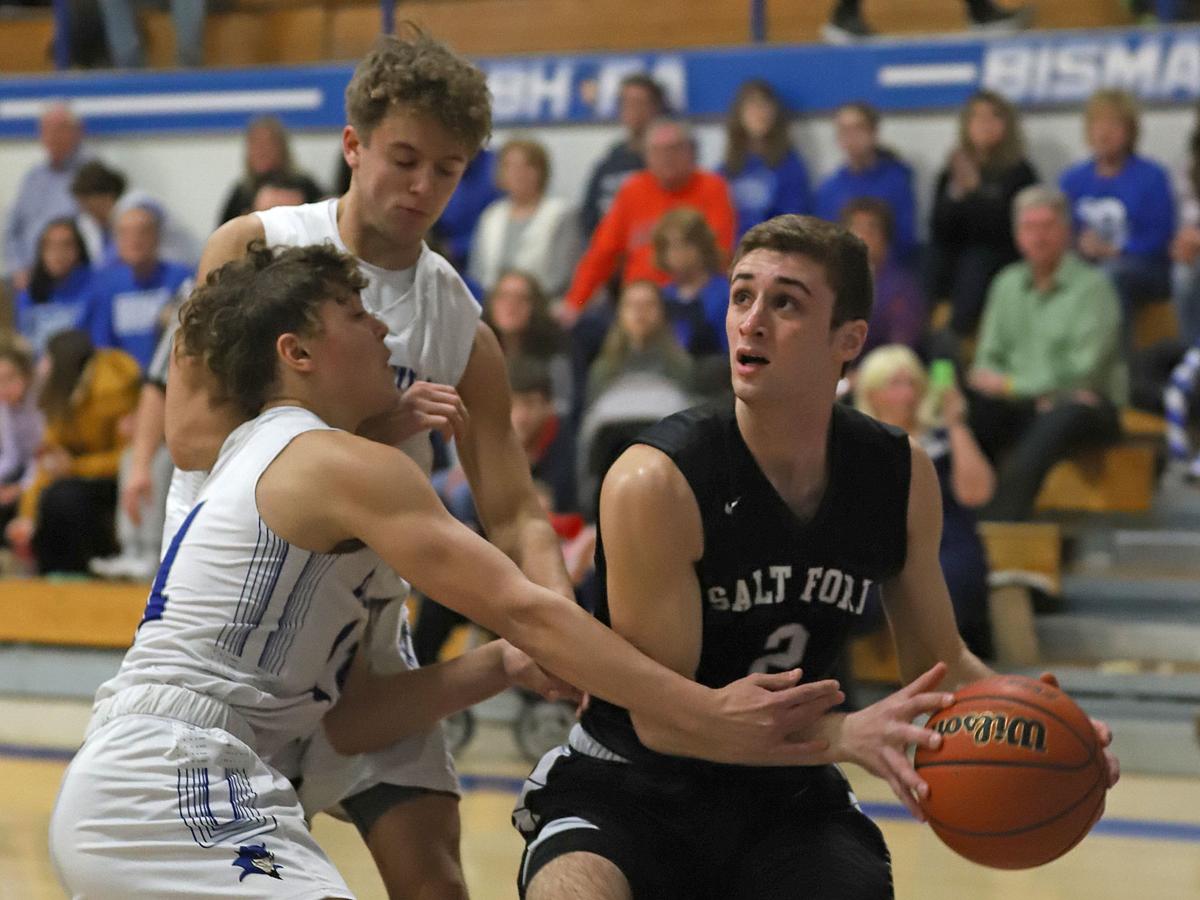 BISMARCK — Honestly, no team in the Vermilion Valley Conference has come close to stopping the Bismarck-Henning/Rossville-Alvin Blue Devils.

On Tuesday night, the Salt Fork Storm took its best shot at the kings of the mountain.

In the end, it was more of the same.

Bismarck-Henning/Rossville-Alvin secured at least a share of the conference title with an 86-40 win over Salt Fork.

It’s not only the 28th consecutive win this season for the Blue Devils, who are ranked No. 10 in this week’s AP Class 2A Poll, but it’s their 11 straight conference win by 10 points or more this season. The average margin of victory in league games this season for Bis-Henn/Ross-Al is 29.4 per game with Tuesday’s win being its biggest of the season.

“We’re playing really good basketball,’’ said Bismarck-Henning/Rossville-Alvin coach Gary Tidwell. “We felt like we had a team capable of going undefeated in the conference and we are two wins from accomplishing that.’’

The Blue Devils can claim an undisputed VVC title tonight with it’s game against the Milford Bearcats. The junior-varsity tips at 6 with the varsity contest set for around 7:30 p.m.

Milford lost to BHRA 56-46 on Jan. 7. That is the only conference game this year that the Blue Devils haven’t won by more than 20 points.

“Milford is a good defensive team,’’ Tidwell said. “We want get this win and cross another thing off our mission list.’’

Pinpoint perimeter shooting was a key to Tuesday’s win over Salt Fork.

According to Tidwell, the Storm tried a triangle-and-two defense on the Blue Devils.

Senior Avery McConkey made Salt Fork pay for that, knocking down six 3-pointers on his way to 22 points, while senior guard Drew Reifsteck had 25 and Mason Hackman returned from injury to scored 12 of his 17 in the second quarter.

“I was really pleased with our ball movement and that allowed Avery to knock down some big shots,’’ Tidwell said. “Elijah (Tidwell) also hit a couple of 3s in that second quarter, while Kaj (Stanford) had one in the first quarter.’’

The Blue Devils drained 11 from behind the 3-point arc in the victory.

“But getting Mason back was the big thing tonight,’’ Tidwell said. “It was good to see him do so well in his first game back.’’

Salt Fork senior forward Payton Taylor had a team-high 22 for the Storm.

FITHIAN — Josh Young scored a game-high 22 points as the Comets improved to 2-1 against the Buffaloes this season, with both victories coming in the conference games.

Senior Elijah Harden scored 10 of his 16 points in the third quarter as Oakwood opened a 52-28 lead against Georgetown-Ridge Farm, who won the Vermilion County Tournament matchup.

Sophomore Cale Steinbaugh was the only player for the Buffaloes in double figures with 13 points.

HOOPESTON — All eight seniors scored at least two points as the Cornjerkers defeated the Trojans for a senior night victory.

Forward Lucas Hofer led the way for Hoopeston Area with 18 points, while Josh Delfino and Cameron Flint joined him in double figures with 14 and 13 respectively.

Rylee Showalter was the leading scorer for Armstrong-Potomac with 17, while Dylan Knight chipped in with 11.

MILFORD — All five starters for the Bearcats scored in double figures in a win over the Hilltoppers on Tuesday night.

Trace Fleming had a game-high 20, followed by Klaytin Hunsinger and Trey Totheroh with 13 each and then came seniors Nick Allen and Tanner Sobkoviak with 10 each.

Cole Carnahan was the top scorer for Schlarman Academy with 13, while Dawson Dean tossed in 11.

MONTEZUMA, Ind. — The Patriots could not overcome a slow start on the road against the Panthers.

Riverton Parke built a double-digit lead in the first half and then held off Seeger in the game’s final 16 minutes.

Kolton Pearson and Owen Snedeker combined for 25 second-half points but it wasn’t enough. Pearson finished with 18 for the Patriots, while Snedeker had 14.