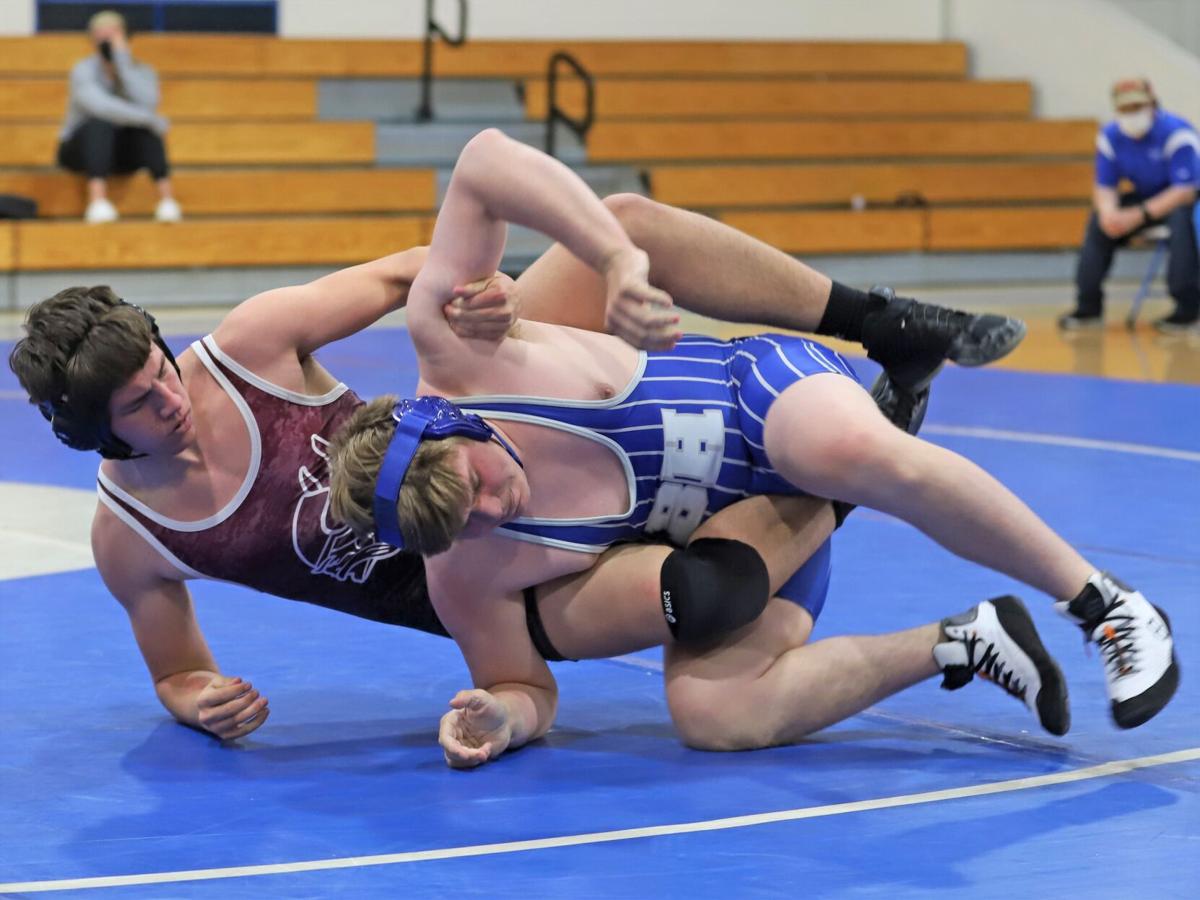 Calvin Hempel of Danville works on pinning Bismarck-Henning Rossville-Alvin senior Braxton Wilson during their match Tuesday evening in Bismarck. Hempel won the match on a pin, but the Vikings lost 54-24. 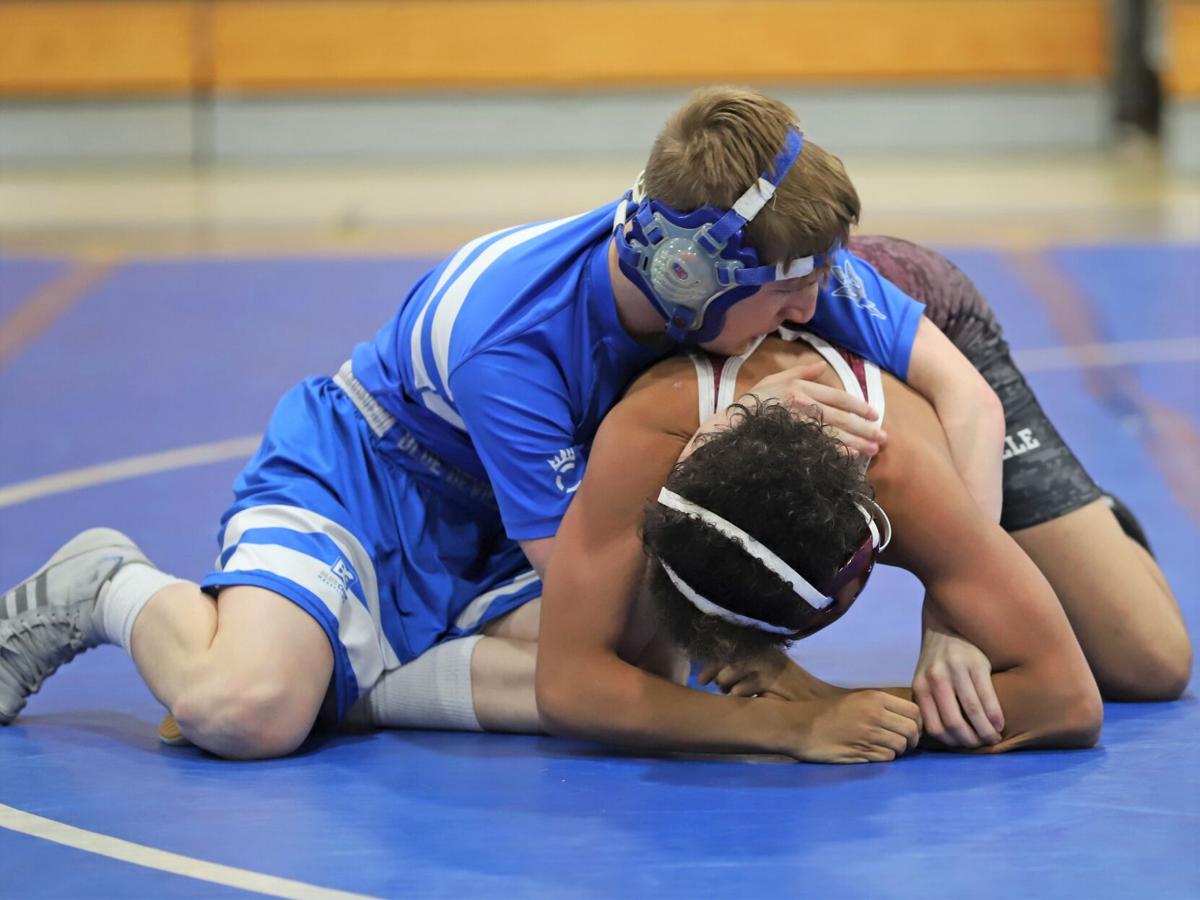 Calvin Hempel of Danville works on pinning Bismarck-Henning Rossville-Alvin senior Braxton Wilson during their match Tuesday evening in Bismarck. Hempel won the match on a pin, but the Vikings lost 54-24.

BISMARCK — With the team score of Tuesday's match was guaranteed for one team, the Bismarck-Henning/Rossville-Alvin/Armstrong-Potomac and Danville wrestling teams were still in the midst of a changing spring season.

The Blue Devils were having senior night en route to a 54-24 win at Wilcox Gym, while the Vikings were in the midst of a season in where they are rebounding from the loss of late coach Terrence Tetter.

"I was an assistant under Terrance for four years and that is why I wanted to coach this year to pay tribute to him," Danville coach Jeremy Stimac said. "We are going to pay tribute to him in a home meet later to honor what he did to develop the program for the last few years."

"That was hard. I remember the last time we went to see him. We drove past his house, but he stopped us to talk to us," senior Eliseo Perez said. "I think he impacted everyone that was here with him a lot. I know my brother was in college and it impacted him."

"Coach Stimac is funny, but there was a good energy with Tetter in the room," sophomore Calvin Hempel said. "He brought the best out of us and he made us better men and wrestlers. He is missed."

The Vikings had six wrestlers available, which has been the way for a lot of teams in this special spring season.

"We had 10 kids come out for wrestling. we fought ineligibility big time but it was going to be down," Stimac said. "The numbers are down all around the state, but we are making the best of it.

"We have a few people that were supposed to come out this season, but they were held back by grades with remote learning," Perez said. "We have three freshmen and one that has not wrestled at all. I t is actually nice to have a smaller team because it keeps the focus and it helps bond with your teammates."

"It was pretty good match. He worked hard in the match and we had a fun time," Brown said. "To come from junior high to high school wrestling has been hard work. We have just started and we are getting back into the groove, but we will make it work."

"It felt good to ruin a kid's senior night, but it would have been good to win as a team," Hempel said. "It still feels good to be on the mat and do what we love again, even though everything is different.."

While freshman Brendan Whitney got the only win for BHRAAP, it was the seniors — Gada Bryant (106), Cole Brumfield, Jacob Darby (285), Donnell McClure (152), Issac Tabels (132) and Braxton Wilson (220) — that was center stage with an pregame event that highlighted their careers.

It was an event that Bryant almost missed as she sprinted from the BHRA softball game to the wrestling mat. It has been part of a new normal for the returning state qualifier.

"It was a big change, we were in the middle of a tough game and we were winning 3-1 and I think we ended up wining by 10-run rule," Bryant said. "I found how to make time with it because in the beginning, I went to one practice and then to another one and then focused on school work or whatever else outside, but after time, I have gotten the hang of it."

BHRAAP coach Andy Head said that to even have the seniors recognized was a major accomplishment.

"I was really excited. We had six seniors and they have been a great group through the years," Head said. "The area is struggling with numbers and to have that many seniors still enjoy what they do is a big deal."

I always had a little bit of faith and hoped we had a wrestling season because I really wanted to have one," Tabels said. "It was great. It's nice to be recognized for your last year wrestling and have people cheer and clap for you. Even though I didn't wrestle, it was great to have little facts shared with everyone."

Head said the team is getting better as the season has gone on.

"Danville had some solid wrestlers and they were experienced. We have a few new faces and I am excited with that," Head said. "I always want newer kids to come out and we have had shorter practices, but wrestling is fun and I want the kids to have a great time."

"We are definitely close to end of season form, so give us the end of the season and we will have some great performances. I have some kids that are going to have a good end of the year."

"We have been doing good. We have a young team and I would say we are in a rebuilding season," Bryant said. "But we are still doing good and we won a tournament last week, which is decent for us."

"I have had a good season and a pretty good record so far," Tabels said. "The team is building and we have kids that will be a part of the future and I am hoping to build that up as much as I can."