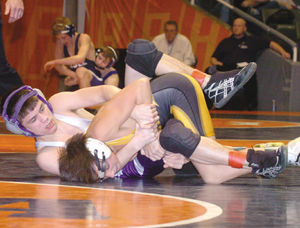 Oakwood's Dacian Alvarez, left, wrestles Braidwood's Trent Lyons during the Class 1A preliminary round in the 103-Pound Class at the IHSA Wrestling State Finals Friday at the Assembly Hall. 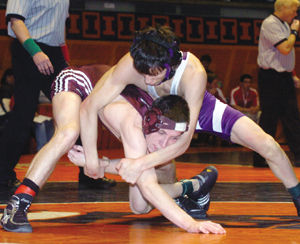 Oakwood's Wesley Patton top, wrestles Benton's Jordan Parola in the Class 1A preliminary round in the 112-Pound Class.

Oakwood's Dacian Alvarez, left, wrestles Braidwood's Trent Lyons during the Class 1A preliminary round in the 103-Pound Class at the IHSA Wrestling State Finals Friday at the Assembly Hall.

Oakwood's Wesley Patton top, wrestles Benton's Jordan Parola in the Class 1A preliminary round in the 112-Pound Class.

It only seems fitting that the youngest Oakwood/Armstrong-Potomac wrestler at the state tournament keeps their Hall of Fame coach working until the end. Freshman Dacian Alvarez of the Comets advanced into this morning’s Class 1A semifinals with his pin over Chris Demming of Rock Falls on Friday night. The victory ensures that Oakwood/A-P coach Dave Markwell, who was recognized as a Hall of Fame inductee before Friday night’s session, will be matside for at least one match during the final day of the individual state tournament. “What a thrill this day has been for me,’’ Markwell said. “We went 4-2 on the day. We’ve got one young man in the semifinals and two more (Wesley Patton and Blake Warren) still have an opportunity of placing at the state meet. “It’s quite a way to end a career. I’ve going to ride this horse until it’s done and then we’ll put a new jockey up in the saddle.’’ Alvarez (33-3) got into today’s semifinals with a move that he has never used before Friday. Midway through the third period, Alvarez used a spladel to put Denning on his back and with just 28 seconds left in the match the Oakwood/A-P freshman was advancing with a pin. “I have never tried before and I’ve just done it in practice a couple of times, but I’ve never done it in a meet until today,’’ he said. “He had my leg and Wesley Patton, my practice partner, always does it to me. I tried practicing with him and I remember him having my leg in the middle, so I just grabbed his leg.’’ Patton, a sophomore state qualifier at 112 pounds, went 1-1 on Friday with a win in the first round followed by a quarterfinal loss to Harvard’s Sergio Figueroa, by pin in 1 minute, 49 seconds. But, Markwell points out that Patton also played a role in the win by Alvarez. “Wesley is a good teacher. He knows what he is doing and he’s been around wrestling for years,’’ Markwell said. “As a result of it, Wesley taught it to Alvarez — he picked it up, and wasn’t scared to use it in a meet. “Our team is close-knit and they are really willing to help each other. They really work together well. That is what makes it so much fun coaching. That is what is going to make it hard to walk away from, as well.’’ In today’s semifinals, Alvarez will have the daunting task of facing the state’s top-ranked wrestler at 103 pounds in East Alton-Wood River’s Josh Bennett (41-0). “He won state in youth wrestling,’’ Alvarez said. “I’ve always seen him in the championships, but I’m ready for him.’’ Have you ever wrestled him? “Nope,’’ Alvarez said. “I’ve seen him wrestle a lot of times and I will do my best against him.’’ Senior 285-pounder Blake Warren, who Markwell coaxed into becoming a wrestler four years ago, also went 1-1 on Friday at the Class 1A State Tournament for the Comets. In his opening match, Warren set an apparent IHSA record with his pin in 19 seconds over Clifton Central’s Jon Dandurand. “Wow, that’s amazing,’’ Warren said. “I think my fastest pin ever is something like 30 or 40 seconds.’’ Whether or not it is a record was debatable. According to the IHSA State Tournament Program, the quickest pin in the Class 1A 285-pound weight class before Friday was 35 seconds by Jesus Gonazles of Aurora Central Catholic in 2007. The official results did not credit Warren with the record, but they did credit Harvard’s Dan Stott with a record at 152 pounds. Warren had just wrestled Dandurand on senior night at Oakwood. “I don’t remember the score, but I know it went the full six minutes,’’ Warren said. “I had no idea that it would end this quick.’’ So, what was the move that worked so well? “It was a simple over-and-under — my favorite move,’’ Warren said. “ I try to use it on everyone. It’s really simple, but simple moves seem to work.’’ Things didn’t go as well in Warren’s quarterfinal match. He fell behind 4-0 to Kewanee’s Andre Dunn (36-2) in the first period. Warren got as close at 6-3, but in the final minute, Dunn caught him and recorded a pin with 32 seconds left in the match. Patton was the second of three consecutive wins by the Comets in the opening round, beating Benton’s Jordan Parola, 13-6. “Getting a win at state means that all of my hard work has paid off for me,’’ Patton said. “I would say the key for my win was conditioning. It seemed like he was out of shape and he just gave up about halfway through the match.’’ Both Warren and Patton will advance into the wrestlebacks at their respective weight classes with semifinal wins today from Dunn and Figueora. Caleb Williams, the senior 152-pounder from Salt Fork, lost his only match on Friday as he was pinned by Stott. “I dropped my head and I got caught,’’ Williams said. Unfortunately for Williams, the Storm’s career record holder for wins (127), Stott lost his next match ending his season.