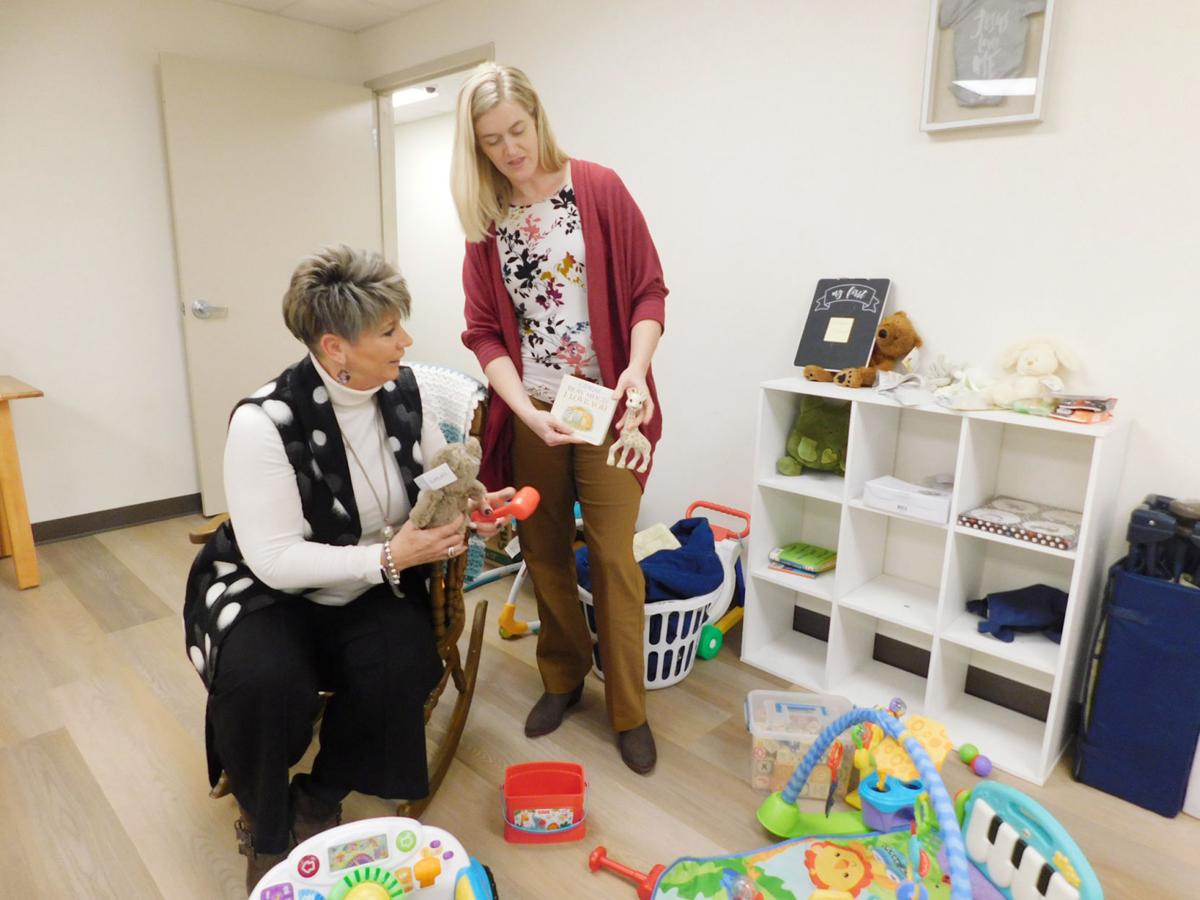 Linda Darby-Dowers, left, president of the Women’s Care Clinic board, and Bethany Hager, director of the center, talk about the toys in a room at its new location on North Bowman Avenue. People may tour the building on Jan. 19. 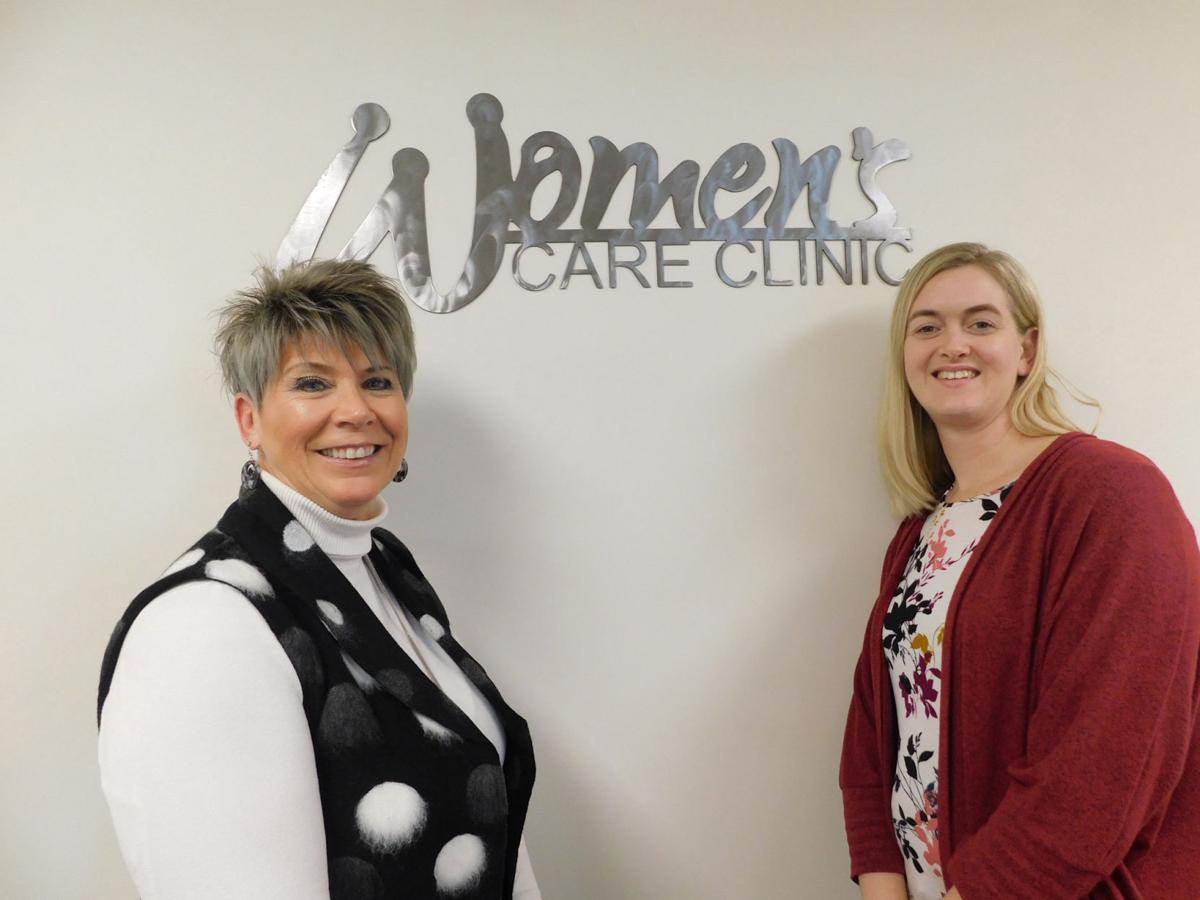 Linda Darby-Dowers, left, president of the Women’s Care Clinic board, and Bethany Hager, director of the center, pose under a sign at its new location on North Bowman Avenue. People may tour the building on Jan. 19.

Linda Darby-Dowers, left, president of the Women’s Care Clinic board, and Bethany Hager, director of the center, talk about the toys in a room at its new location on North Bowman Avenue. People may tour the building on Jan. 19.

Linda Darby-Dowers, left, president of the Women’s Care Clinic board, and Bethany Hager, director of the center, pose under a sign at its new location on North Bowman Avenue. People may tour the building on Jan. 19.

DANVILLE — Every time Bethany Hager and Linda Darby-Dowers walk into the new home of Women’s Care Clinic, they pinch themselves to make sure it’s not a dream.

“It gives me goosebumps,” board president Darby-Dowers said as she gave a tour of the new site at 1509 N. Bowman Ave. “I think of all the moms, kids and dads who will be helped in this place. It’s awesome.”

“We stepped out in faith,” Executive Director Hager said. “There were different days we wondered if it would come together.”

Hager and others are excited about an upcoming open house, which will start with a ribbon cutting and prayers at 2 p.m. Sunday, Jan. 19. Then, there will be tours and food until about 4 p.m.

In 2019, the clinic provided just more than 300 pregnancy testing consultations and 280 ultrasound appointments. It serves 450 women and men through parenting education groups and goal setting courses.

The organization had been located at 200 W. Williams since 2006, but has outgrown that site. That building will be sold or donated, Hager said.

The clinic is making the transition from the old to the new site, with some of the 30 rooms already set up or awaiting furniture and computers.

Both ultrasound machines are in place, and training is under way for the staff. The clinic hopes to offer services starting the week of Jan. 23.

The building, just north of New Life Church, has space for three organizations or businesses inside. It has had many tenants over the years, including Eagle grocery and a recycling center.

Women’s Care Clinic bought the entire building at the end of 2013, but is using only one-third of it. The middle part has been bought by a developer from the East Coast, and the third part is for sale.

“We have prayed over this building for the five years we’ve had it,” Darby-Dowers said. At one point, they talked about how awesome it would be to have non-profit groups in one space, and combine resources so families have to make only one stop.

Since the purchase, workers have stripped the building down to its shell, and put in walls, plumbing, wiring and other utilities. Each stage of construction was funded as money became available.

Only local contractors were used.

“There are people here who want to make our community better,” Hager said. “Those kinds of people poured into this space.”

In 2017, the inside walls went up and that built momentum, she said.

Darby-Dowers said, “It’s really exciting. It’s created more of a buzz about who we are and what we do.”

Hager reached out to local churches to see if they wanted to “adopt” a certain room by outfitting it or making a donation toward it.

For example, the lobby welcomes people with bright-green and black furnishings, thanks to the Second Church of Christ. First Church of the Nazarene adopted an ultrasound room and St. Paul’s Catholic Church contributed to a room.

Plaques will be placed in the rooms to acknowledge the churches’ contributions.

The Cadle Foundation helped furnish the room used for a men’s ministry.

Grants and donors have helped the Women’s Care Clinic become reality, and the building is paid off. Anonymous donors also have matched funds.

The cornerstones of fundraising were the Banquet for Life and the Walk for Life, both of which broke records last year. This year, the banquet will be April 23 at the Fischer Theatre and the walk will be in September.

“Our community has been amazing,” Darby-Dowers said. “So many people have donated time and treasures. It’s been a blessing.”

Referring to people who criticize Danville, she said, “They can say what they want, but Danville rises to the occasion.”

The new clinic has two long hallways, with staff offices on one side and client services on the other side.

One large room will serve as a kitchen for staff and moms who meet for group sessions. Moms will be encouraged to come early and learn tips on preparing meals.

Hager said families who dine together at least once a week are stronger.

There also are some play areas for the children. The Ronald McDonald House Foundation gave a grant to outfit a play area.

There also will be a shopping room, where mothers can spend the points they earn to buy diapers, clothing, car seats and other items.

With all this extra space comes the challenge of staffing it. That’s where volunteers are needed.

“With it being a bigger place,” Hager said, “we need people to be greeters, to facilitate meetings, organize the market …” People with medical experience also are welcomed to volunteer.

Looking over the new site, Darby-Dowers said, “It has been a long journey and we are so thrilled to see this project come to fruition. This building will be a blessing for many women and families in the future.”

Hager said, “When you step out and want to do something bold for God, He gets it done.”

The Women’s Care Clinic is a 501©(3) nonprofit organization that receives no government funding; instead, it relies on donations and fundraisers.

• To donate, go to https://give.classy.org/danvillestars

• More volunteers are needed to help serve as greeters, facilitate meetings, organize the market and other duties. Medical professionals are asked to volunteer time, as well.