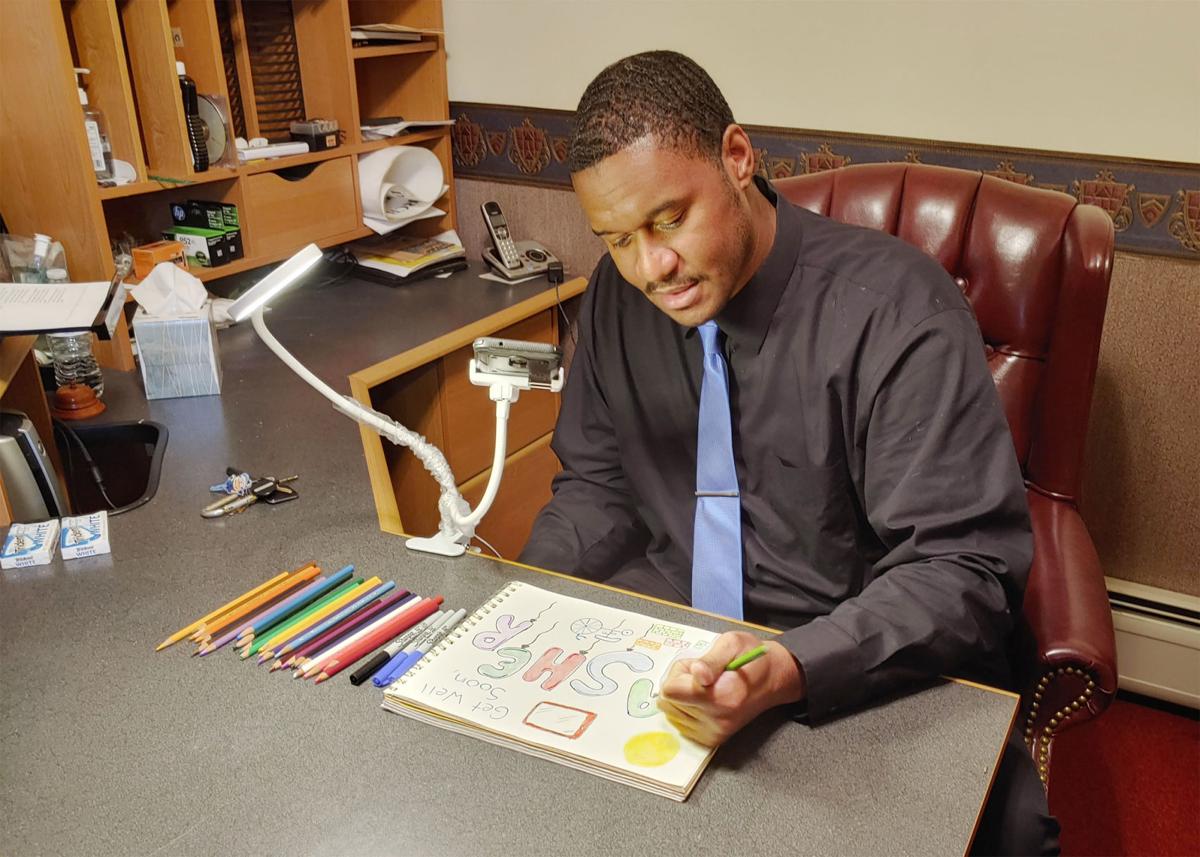 Jason Henton, a Southwest Elementary School prekindergarten teaching assistant, creates a Facebook Live video of him drawing a get well sign for a student. 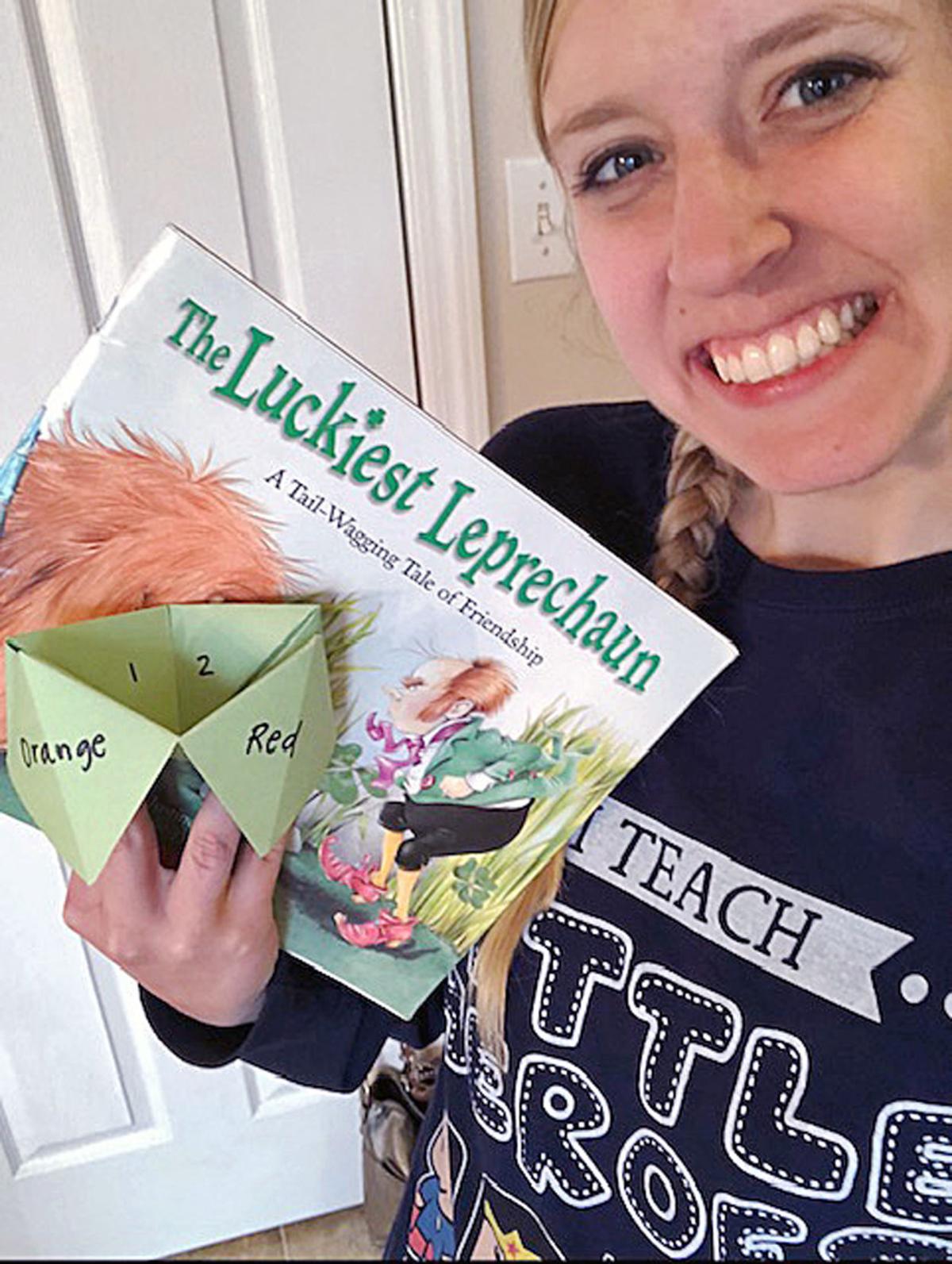 Southwest Elementary School first-grade teacher Katie Witzel shows her students during a video how to make an origami cootie catcher as a supplement to a book they read.

Jason Henton, a Southwest Elementary School prekindergarten teaching assistant, creates a Facebook Live video of him drawing a get well sign for a student.

Southwest Elementary School first-grade teacher Katie Witzel shows her students during a video how to make an origami cootie catcher as a supplement to a book they read.

DANVILLE – Danville District 118 teachers have been getting creative as they try to keep in contact with their students while schools statewide remain closed.

Teachers have been mailing postcards and letters to their students, while others have been posting videos to social media to share fun activities the children can do.

Although teachers at each of the district’s schools have been posting videos, some of the teachers at Southwest Elementary School have quite a following.

“Several of the teachers started talking as soon as we found out we wouldn’t be coming back to school March 30,” Southwest first-grade teacher Katie Witzel said. “We wanted to stay in contact with our students, so some of the teachers signed up to make videos.”

“We decided as a staff we wanted to do our best at staying connected with our families and find a way to let them know we missed them and school as much as they did,” Southwest Principal Lindsey Prunkard said.

“When we originally began posting our Facebook Live videos, we were unaware there would be an extension to our time away from school,” she said. “As the timeframe for being out of school expanded, the district encouraged us to stay connected with our families via social media.

“The Southwest staff is extremely innovative and with a simple ‘let’s stay connected with our families’ directive, they set off and responded with Facebook Live videos that have included daily drawing lessons, circle time, story time, yoga, AVID strategies, work-out activities and bear hunts,” Prunkard said.

“People were having fun with it, so we continued doing it,” Witzel said of the videos.

In her videos, Witzel reads stories and makes crafts.

“I go on every other day and post a video and give them ideas of fun things they can do while still social distancing,” she said.

“For one of my videos, I showed them how to make cootie catchers,” Witzel said, referring to the origami craft. “We made them to support reading comprehension and labeled the sections with characters and settings.

“We’ve had families and friends sharing our activities with others,” she said. “It’s cool what we’re doing is making an impact outside of District 118.”

Jason Henton, a Southwest prekindergarten teaching assistant, has a set time at 9:30 a.m. every day to appear on Facebook Live.

“I’ve done videos where I show the kids how to work out,” he said. “In one of my videos, I went out to Garfield Park and made a peanut butter and honey sandwich, and I also shot some basketball. I made eight out of 10 shots, so that was a good day for me.”

“I can do a different variety of topics because I don’t have a particular class (as a teacher),” he said. “I try to find something that’s fun.”

Henton, however, is probably best known for his drawing and art demonstrations online.

“We’ve done drawings with letters and drawings with numbers,” he said. “I’ve always enjoyed drawing, and I went to school for graphic design.”

“Half the time is spent drawing and the other half is spent coloring it in,” he said.

Most of all, Henton said he hopes his videos are not only entertaining but encouraging.

“I try to be encouraging. It’s a trying time for everyone,” he said. “I try to be positive because the kids are confused about why they’re not going to school and a lot of parents aren’t used to having their kids at home 24 hours a day.”

“Some included pictures and personal letters,” Prunkard said. “Others sent black-and-white lined postcards students could use as a coloring sheet and then post it to the teacher’s online platform to be displayed.

“The mailings communicated how parents could communicate with the teachers via their online platform and had personal messages to the students saying, ‘We miss you,’ ‘We hope you’re doing well,’ ‘We cannot wait to see you back at school,’” she said.

A letter that Desi received included a photo of his teacher and two teaching assistants.

“He kissed the picture and embraced it, which is amazing because he is nonverbal and doesn’t show emotion,” Combs-Williams said.

She said Eliza has enjoyed the teacher videos, especially the ones recorded by Witzel, who is her teacher.

“Ms. Witzel was reading a story about dogs and her dog, Annie, joined in,” she said. “Eliza hasn’t stopped talking about it since.

Combs-Williams said she and her children watch the other Southwest teachers’ videos as well.

“We watch all the videos,” she said. “We see about six to eight videos a day.

“Eliza did yoga with them, and she’s met Ms. Witzel’s dog and Ms. Prunkard’s cat,” Combs-Williams said. “She’s meeting teachers and the principal on a different level and at their home.

“She enjoys all the videos, but she really likes the videos that are personalized and a show a glimpse of where the teacher lives.”

Combs-Williams said she is grateful for the efforts of Southwest’s staff to keep in contact with the families.

“I hope the teachers realize how much they’re appreciated,” she said.