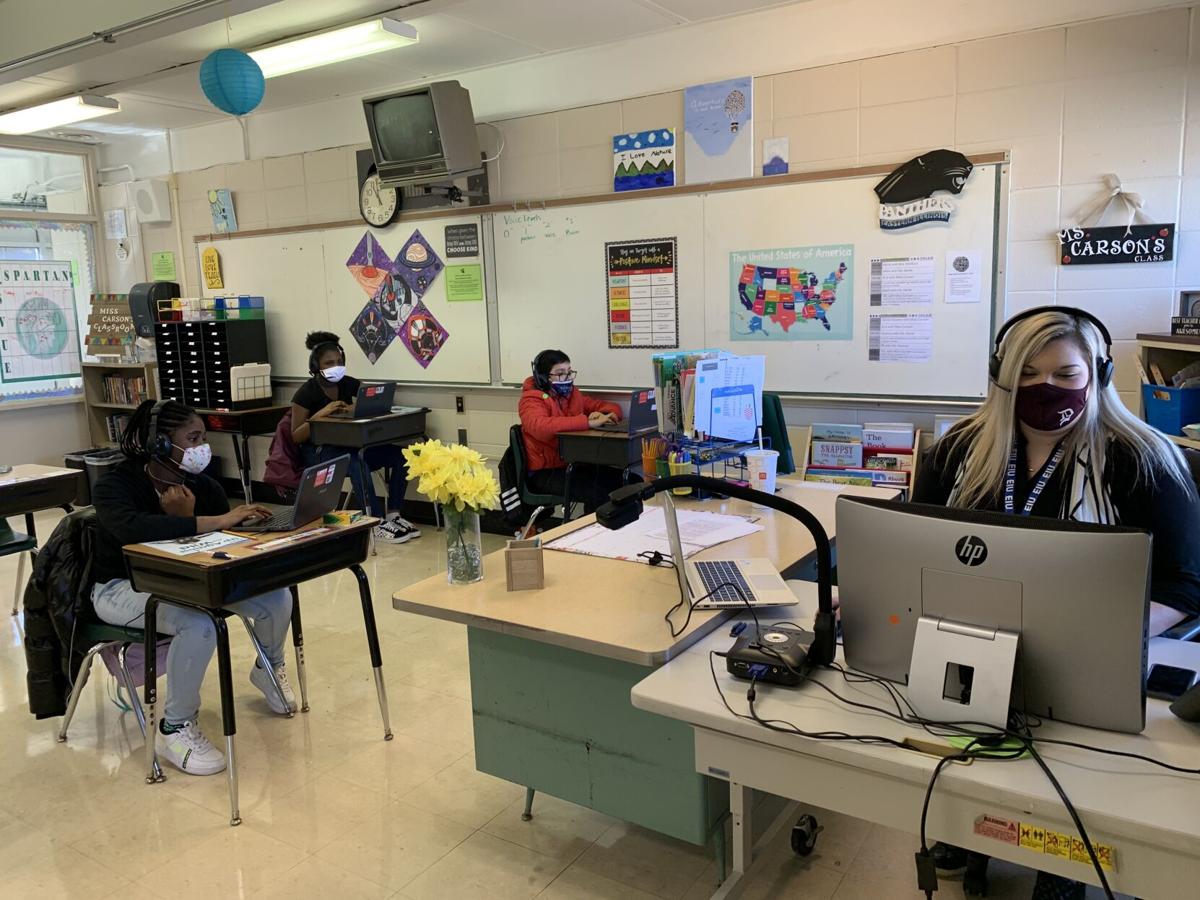 South View Upper Elementary School Teacher Emily Carson talks to a class at her desk computer as students in the classroom attend a different class last week. More Danville District 118 students are returning to in-person learning after being out of school for almost a year due to COVID-19. 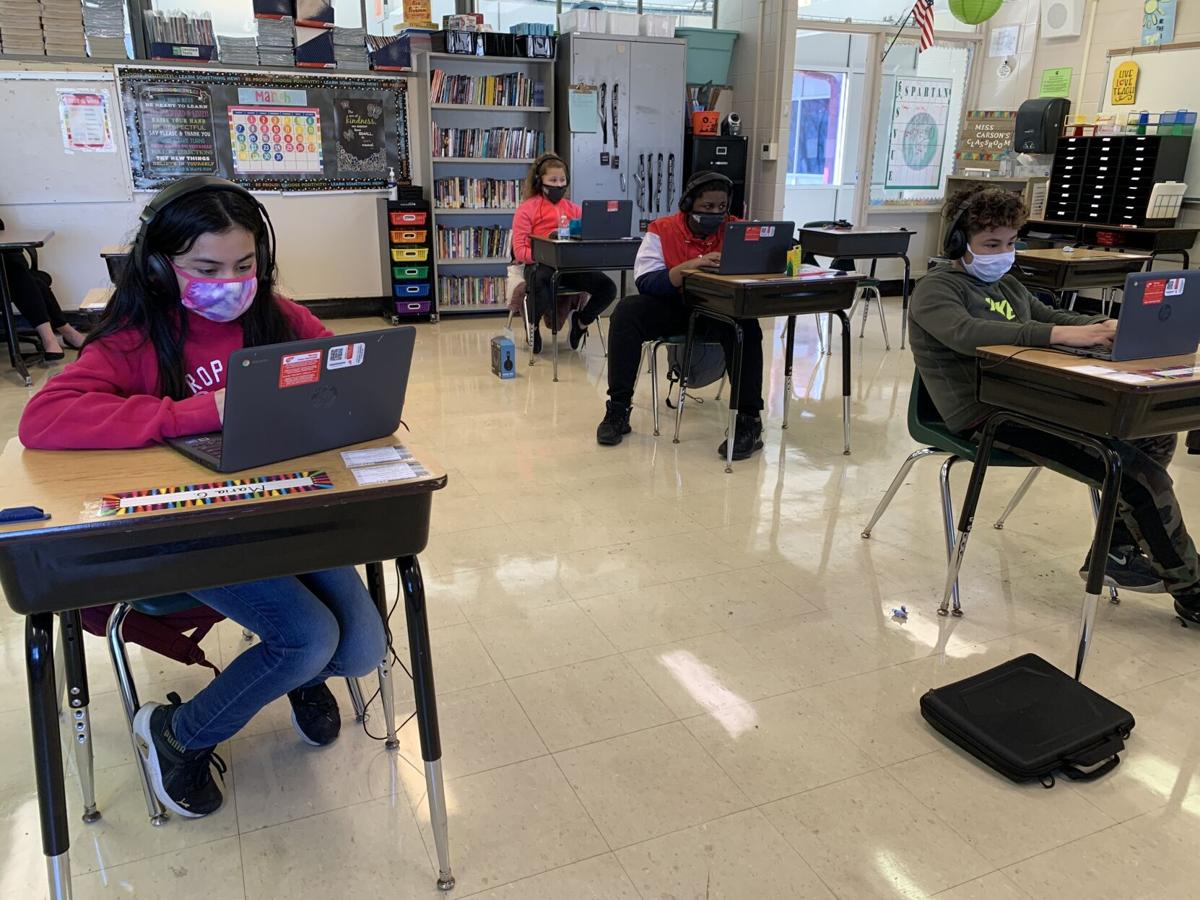 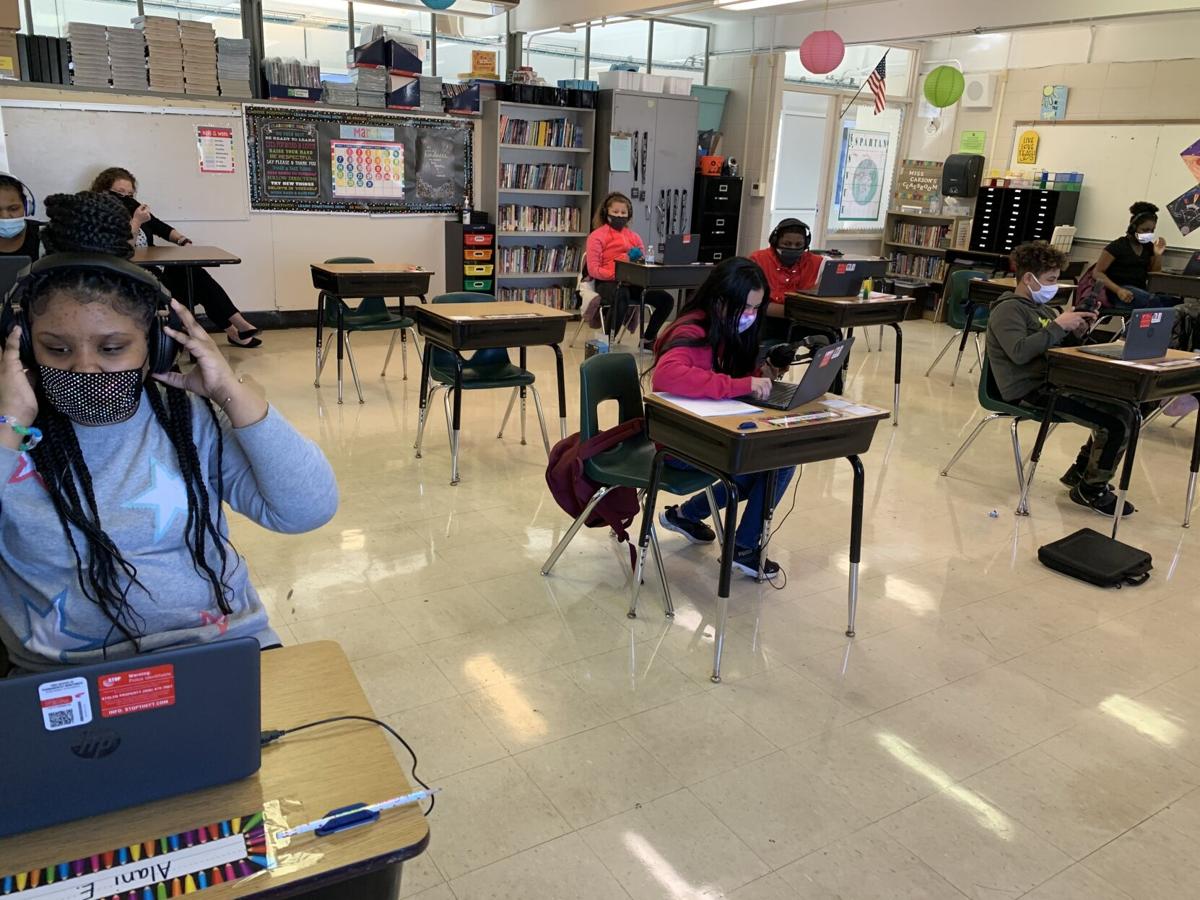 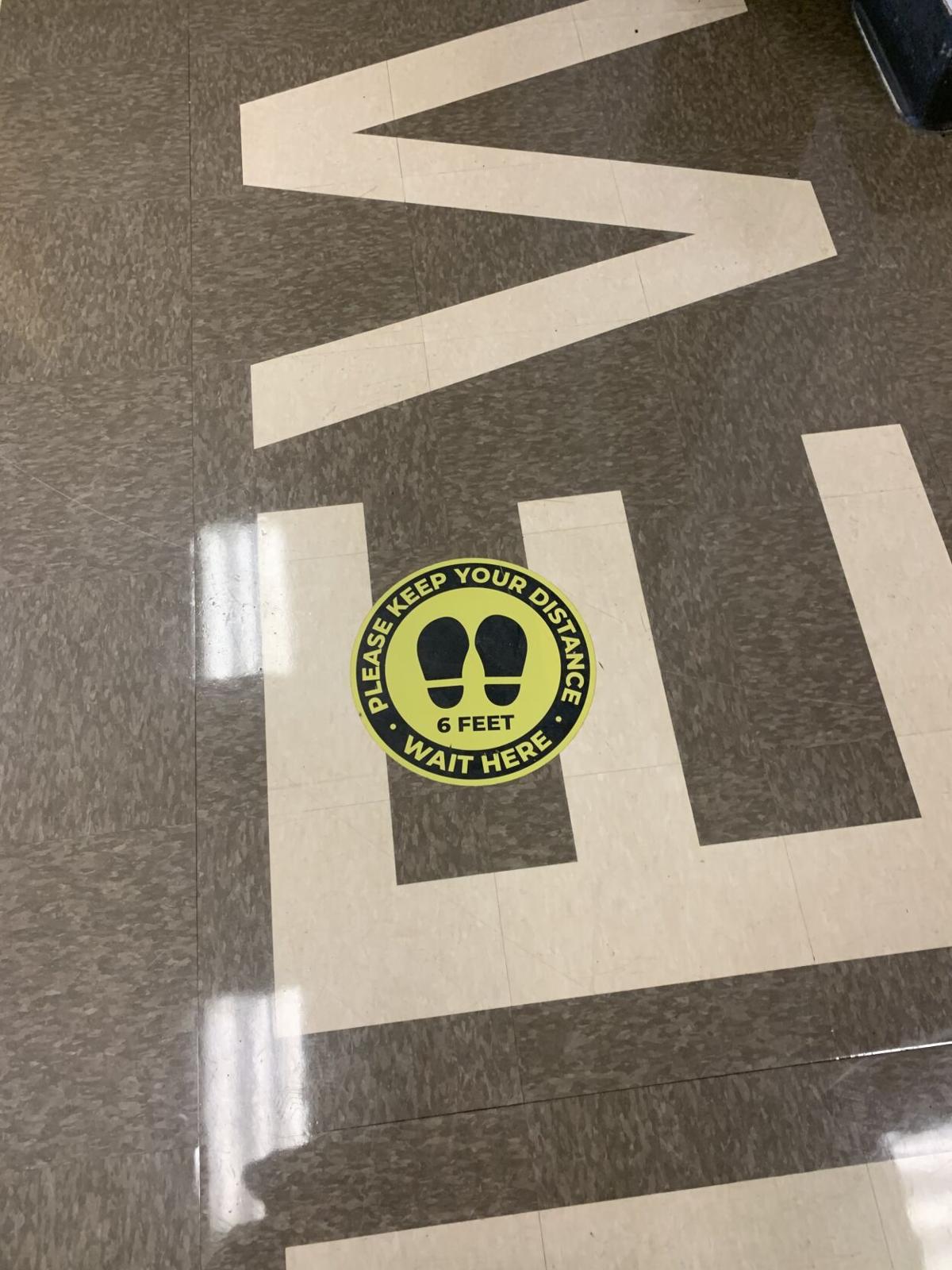 A social distancing decal sticker on the floor inside South View Upper Elementary School in Danville. 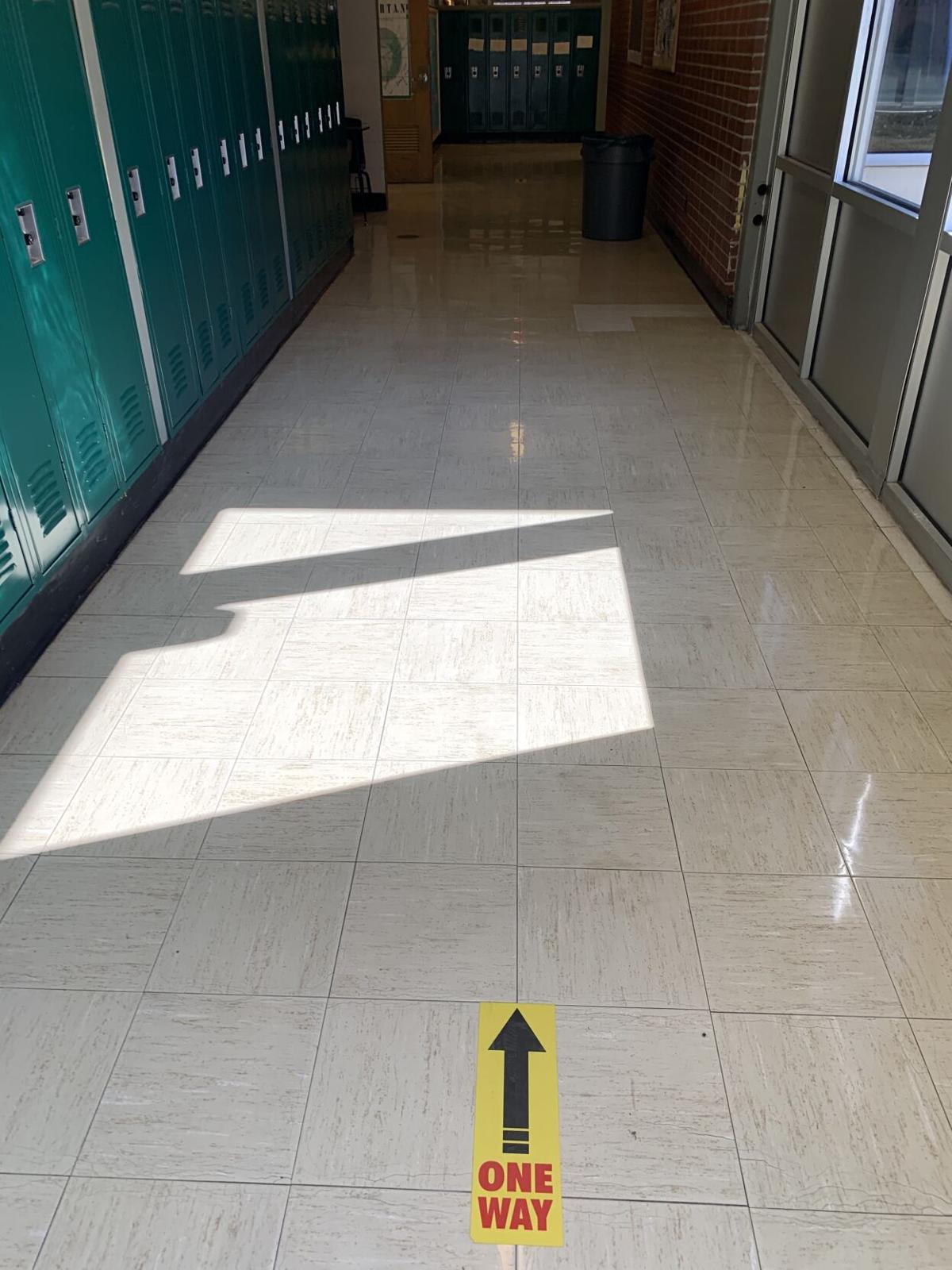 A one-way decal sticker on the floor inside South View Upper Elementary School in Danville.

South View Upper Elementary School Teacher Emily Carson talks to a class at her desk computer as students in the classroom attend a different class last week. More Danville District 118 students are returning to in-person learning after being out of school for almost a year due to COVID-19.

A social distancing decal sticker on the floor inside South View Upper Elementary School in Danville.

A one-way decal sticker on the floor inside South View Upper Elementary School in Danville.

DANVILLE — A recent show of students’ hands in one fifth-grade class at South View Upper Elementary School in Danville showed how excited they are to be back in school.

South View will already be on its third week for in-person school next week for about 270 students, a third of the school’s 670 fifth- and sixth-grade students.

More are expected to join in April, in the fourth quarter, with almost 40 already signed up to be added. Classroom adjustments will be made as needed and allowed by restrictions.

About a third of students also are to start back at North Ridge Middle School next week and more will follow this month at Danville High School.

South View’s Principal Lindsey Prunkard commended the students, teachers and staff in “going with the flow.”

She said plans can change hourly regarding school operations with COVID-19 restrictions.

One bus at a time brings and picks up students between two doors, while students who are dropped off/picked up by parents or guardians are at another door. The students can have breakfast in the mornings, at the start of their 9 a.m. to 2 p.m. school day.

Signs are on the front doors stating the school’s mask and social distance requirements.

Decal stickers are on the floor in the school’s hallways denoting one-way walking, and six-feet social distancing.

Students’ desks are spaced out in classrooms and the cafeteria, where some of the students who eat there instead of in their classrooms have a designated space to sit and eat. Hand sanitizer also is in view.

It truly is an unprecedented time, Prunkard said, adding that they are making it work for their students.

“I have one of the best staff. It’s all hands on deck. It’s the best we can do with the restrictions we’re given,” she said, about keeping everyone safe.

Other classroom changes include: teachers and students are wearing headsets for classes to also interact with students at home, students do not change rooms as usual for different classes (they still go to PE and specialty classes such as band) and students are not using their lockers but have bins in the classroom for items.

Students, including those who’d never been inside the school, were given a tour when they returned to learn about the social distancing changes. Some teachers also had never seen some of their students’ faces before they started back to school due to students not turning on their computer cameras at home. The students still would interact at home, such as through computer chats.

Prunkard said with students back in school, they can interact with their peers again in and between classes, before and after school. They can also raise their hands and ask questions of their teachers in person, and work in small groups.

She said about the first week back, “it went extremely smooth. Kids are resilient.”

The teachers, kitchen staff and others all pitched in, she said, adding that students also help clean and sanitize their desks.

The in-person students are in groups on an A/B schedule, meaning they go in-person two days a week, Tuesdays and Thursdays or Wednesdays and Fridays. Mondays are synchronous days of teacher instruction at home.

There are no more than 14 students in a classroom, based on classroom size.

Prunkard said the Danville school district looked at some other bigger schools’ models on how they operated. Danville school officials felt this model, and providing headsets to reach the 2/3 of students still at home, worked best for interaction.

In teacher Emily Carson’s fifth-grade class this week, with nine students, for English language arts and social studies, students in the classroom participated in a “Simon Says” type game about states. They got out of their seats on a break.

When it was time for the students to change classes, they stayed in the room for their next class. They put on their headphones and started listening to a different teacher through their Chromebook laptop computers.

Carson also put her headset on and started talking to a different group of students via her computer.

Several students said they don’t get distracted because of their headphones.

Student Frankie Resendez said he likes being in school more than being at home learning.

“I’m more focused here,” Resendez said, adding that he’s more focused seeing teachers in person and being in the classroom setting. He’s turned in his homework more, he said.

“It’s helped you,” Carson said, to Resendez of his grades.

Carson too said she missed the more personal interaction with students when they weren’t in school. She pointed out several of the students who she hadn’t seen their faces until a couple weeks ago.

Carson said she sometimes has to remind the students to keep their masks over their nose and mouth, but otherwise, the students are doing great with the virus restrictions.

Student Alani Elliott, who keeps her computer camera off at home, also said she likes being in school better.

Prunkard said it’s all new experiences, but “we’re just excited to be here.”