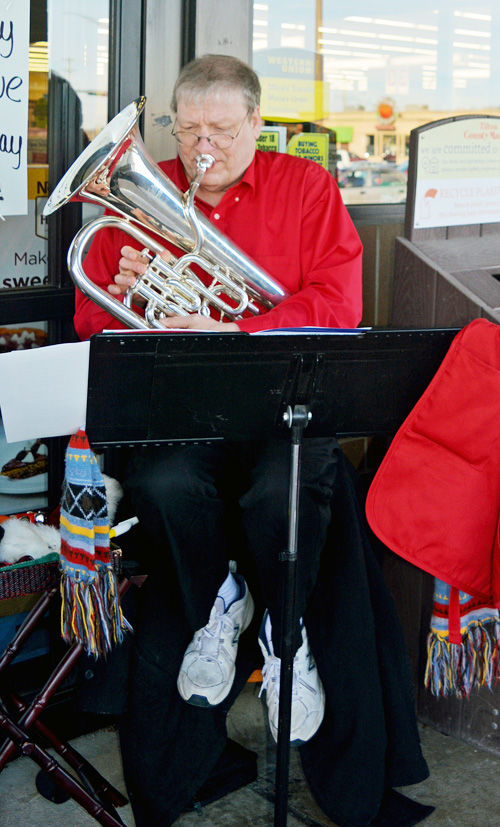 Bryce Bachman of Danville plays Christmas carols on his euphonium Tuesday afternoon during the last few minutes of the Danville Salvation Army’s Red Kettle Campaign at County Market in Tilton. 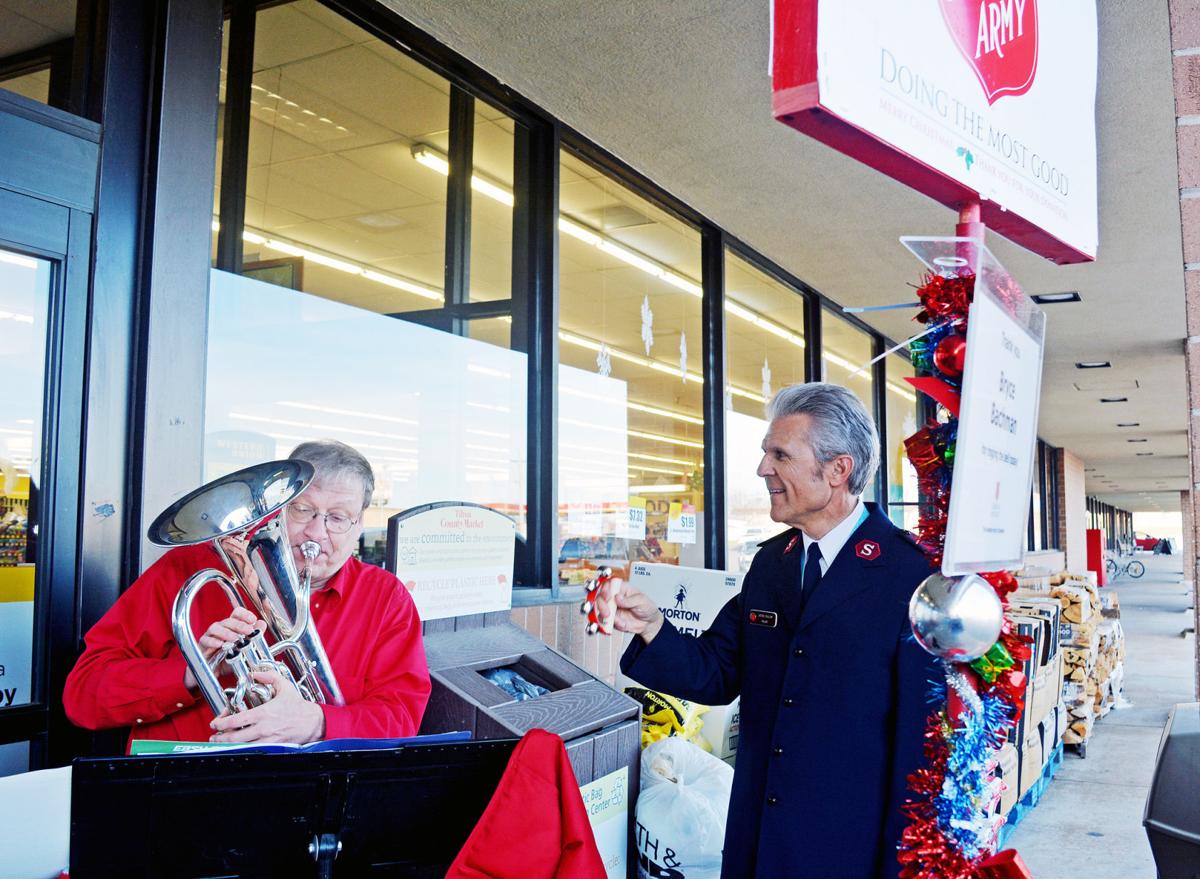 Bryce Bachman of Danville plays Christmas carols on his euphonium Tuesday afternoon during the last few minutes of the Danville Salvation Army’s Red Kettle Campaign at County Market in Tilton.

TILTON – Bryce Bachman put shoppers at County Market in Tilton in the holiday mood Tuesday by singing Christmas carols and playing tunes on his euphonium.

The Danville resident entertained shoppers for two hours with his musical talents rather than ring a bell at a Salvation Army red kettle.

Bachman, who moved to Danville to work at Watchfire, said this was his second year to volunteer at a Danville Salvation Army red kettle site, adding that he also shared his music at red kettle sites in Savoy and Richmond, Ind., earlier during this year’s red kettle campaign.

“This was amazing,” Bachman told Danville Salvation Army Major Jason Pollom as he came to pick up the kettle and stand shortly after 2 p.m. Tuesday. “This is when I feel best about Christmas.”

Christmas Eve marked the end of this year’s red kettle campaign, the Danville corps’ biggest fundraiser of the year.

A large boost in the local campaign came three weeks ago when Pollom discovered a 1975 Krugerrand, a rare South African 1-ounce gold coin valued at $1,475, while counting the change in a kettle that had been located in front of County Market in Danville.

“I am very grateful to have received a Krugerrand,” he said this week. “I actually was the one who discovered it. It happened to be in the kettle I was dealing with.

“I saw a $10 bill folded up in a square and it was taped,” Pollom said. “I knew it was weighty enough to be a coin.

“I was told about Danville’s tradition of receiving a gold coin,” he added. “It’s always wrapped in a $10 bill.”

Pollom said he also discovered a 1915 wheat penny in one of the kettles.

The Danville Salvation Army’s overall goal for this year’s campaign was $85,500, which was a decrease of $24,500 compared with last year’s goal, and covers the local corps’ day-to-day operations for a year, including social services, programming, bills, employees’ pay, food pantry, Christmas baskets and clothing vouchers and helps citizens pay for utilities, rent or shelter and medicine.

Of the $85,500 goal, about $56,000 comes from the kettle donations, Pollom said. Mail appeals, grant money, United Way money and other donations make up the remainder.

As Pollom dismantled the kettle stand, he shared some concerns that the local red kettle campaign possibly could fall short this year because there were fewer red kettle locations than in years past.

“It won’t be as good as last year because of the loss of the two Big R locations,” he said, adding that it was a corporate decision that had been made after Big R became Stock+Field. “It’s going to be difficult to make up that loss.”

Although Danville Salvation Army’s red kettle campaign has ended, online pledges as well as mailed-in and dropped-off monetary donations may still be made to help the organization meet its annual goal by Jan. 31.

Donations may be made online specifically for the Danville Salvation Army at http://centralusa.salvationarmy.org/danville. Checks may be mailed to the Danville Salvation Army at P.O. Box 1366, Danville, IL 61834 or dropped off between 9 a.m. and noon and 1-4 p.m. Monday, Tuesday, Thursday and Friday at the corps’ headquarters, 855 E. Fairchild St.

Sorry, there are no recent results for popular articles.

Sorry, there are no recent results for popular images.