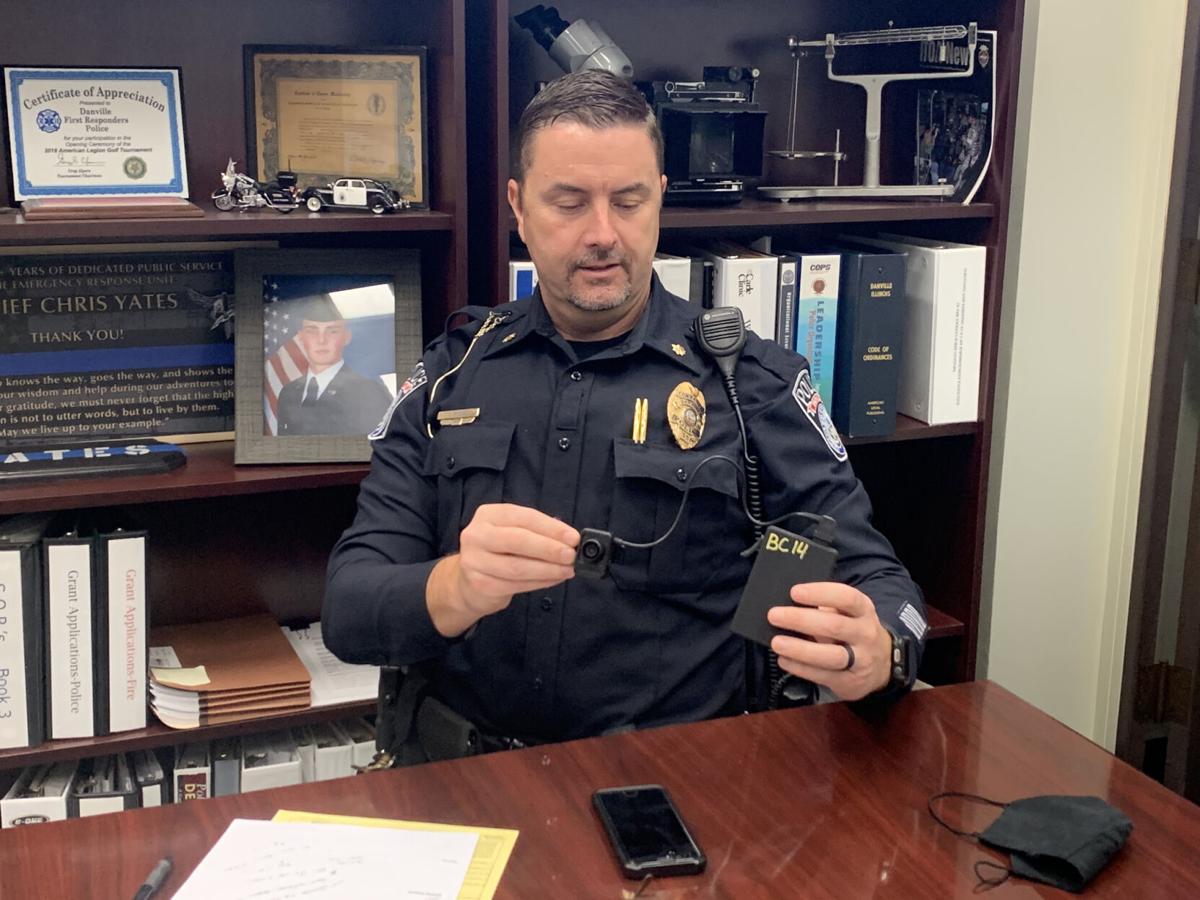 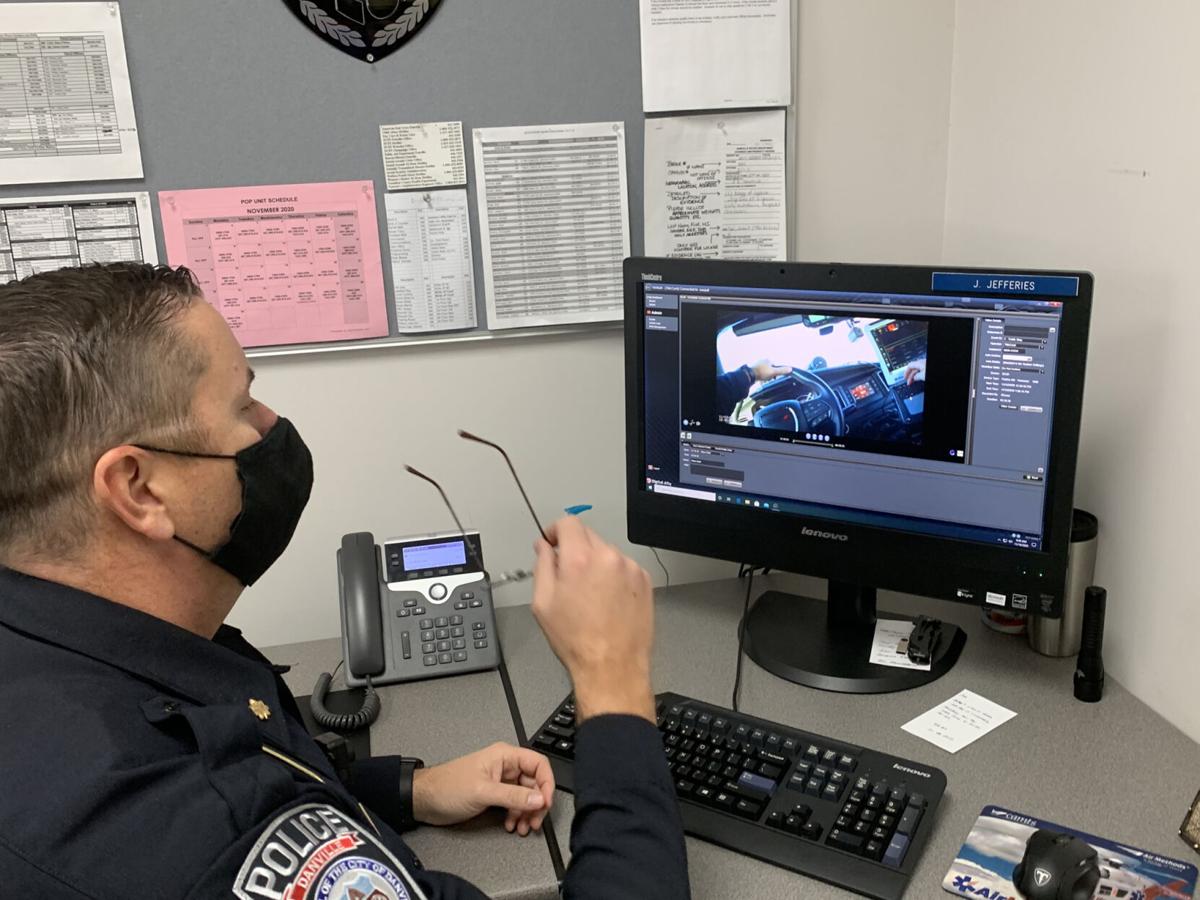 It’s been a long time coming for the cameras. Police department officials have talked about getting the cameras for years, and now have 26 Digital Ally body-worn cameras thanks to a grant.

The department received about $60,000 through an Illinois Law Enforcement Training Standards Board Camera Grant. The grant funding was less than originally expected to purchase the police officer-worn body cameras and new in-vehicle video cameras.

Commander Terry McCord said officers have been trained to use the body cameras.

There’s been reteaching of officers in some cases, such as where to place their hands when speaking to the public on services calls.

One video McCord later reviewed of himself showed him putting his hands in front of the camera when he talked, blocking the body camera.

Yates said it was a collaborative effort with the city’s information technology department in getting the cameras and system ready for use.

The camera clips onto the front of the officer’s shirt. The battery box it’s connected to fits inside their front shirt pocket.

The camera can be manually turned on during a service call, or there are triggers when the camera also turns on, Yates and McCord said.

The cameras turn on when the police vehicles’ emergency lights are on and when the vehicle reaches a certain speed. In-car dash cameras operate the same way.

McCord said the body camera vibrates so an officer knows it’s on. When it’s on there also is a little red light at the top.

There’s a port, docking station inside the Public Safety Building for charging and downloading of video to servers, that holds the cameras for officers to pick one up and report which number of camera they use each shift. The officers plug the cameras back in at the end of each shift.

“The policy is very detailed,” Yates said about using the body cameras.

The cameras also required a lot of storage space for the video.

Yates added the police department can keep the footage for two years or longer, based on if it is evidence in cases. The state’s attorney and others can readily search videos.

“It makes our job more efficient and a lot easier in terms of evidence collection,” he added.

“It was just a lot of work,” McCord said about downloading the video on different DVDs to place into evidence.

Now officers can log onto their computer, fill out a sheet and be done, he said.

“It’s a wonderful tool,” Yates said of the body cameras.

For example, they can go back and assess situations and what happened, such as use of force, at different angles from the body cameras worn on multiple officers at a scene, rather than rely on what officers remember.

The body cameras create transparency and are another public safety tool.

“Our goal is not for discipline,” McCord said.

“It holds the public accountable for what they do and say,” Yates too added. “It’s an excellent source of evidence.”

McCord gave an example of a body camera being turned on when a police officer arrives at a domestic dispute, with the officer not responding with lights and siren.

The officer turns the camera on, with the recording going back about 30 seconds when arriving. In this instance, the call turned into a gentleman resisting arrest, which was recorded on the camera.

McCord said in another example, of an accident with injuries, different angles of the incident can be seen from the responding officers’ body cameras.

“That’s a benefit of having two cameras,” he said too about the in-vehicle cameras.

Yates added that multiple cameras can be important, such as with a DUI case and the in-dash camera and body camera showing police officer arrival and the scene, and when the officer conducts a field sobriety test.

“The different angle is already an advantage,” he said of the cameras, in which one camera might be too close to the subject.

McCord added police investigators also can use the body cameras, but school resource officers won’t be wearing them.

Also, an officer has to ask permission to turn on the camera responding to certain calls, such as a burglary or criminal damage report.

“We don’t want to violate anyone’s rights,” McCord said, but added it can help the police department to have it on.

He said they also don’t have the cameras on in a medical facility, unless responding to a call such as if there was an active shooter or combative subject.

The goal is to purchase more body cameras in the future for all officers to have their own body-worn camera. The department has about 65 officers and supervisors.

Two years ago, when 34-year-old Danathe M. Gulliford died in a police officer-involved shooting, there was poor quality and dark squad car video from the night of the incident. No criminal charges were filed.

Mayor Rickey Williams Jr. then stated “as a result of this incident our administration has taken the following actions: initiated a review of all audio-visual equipment used by the police to ensure proper function; begun reviewing various updated audio-visual systems such as body cameras to ensure the safety of both our citizens and officers moving forward.”

Danville NAACP President Ed Butler also said at the time that the department needed to invest in body cameras for its police officers so there are no questions on situations.