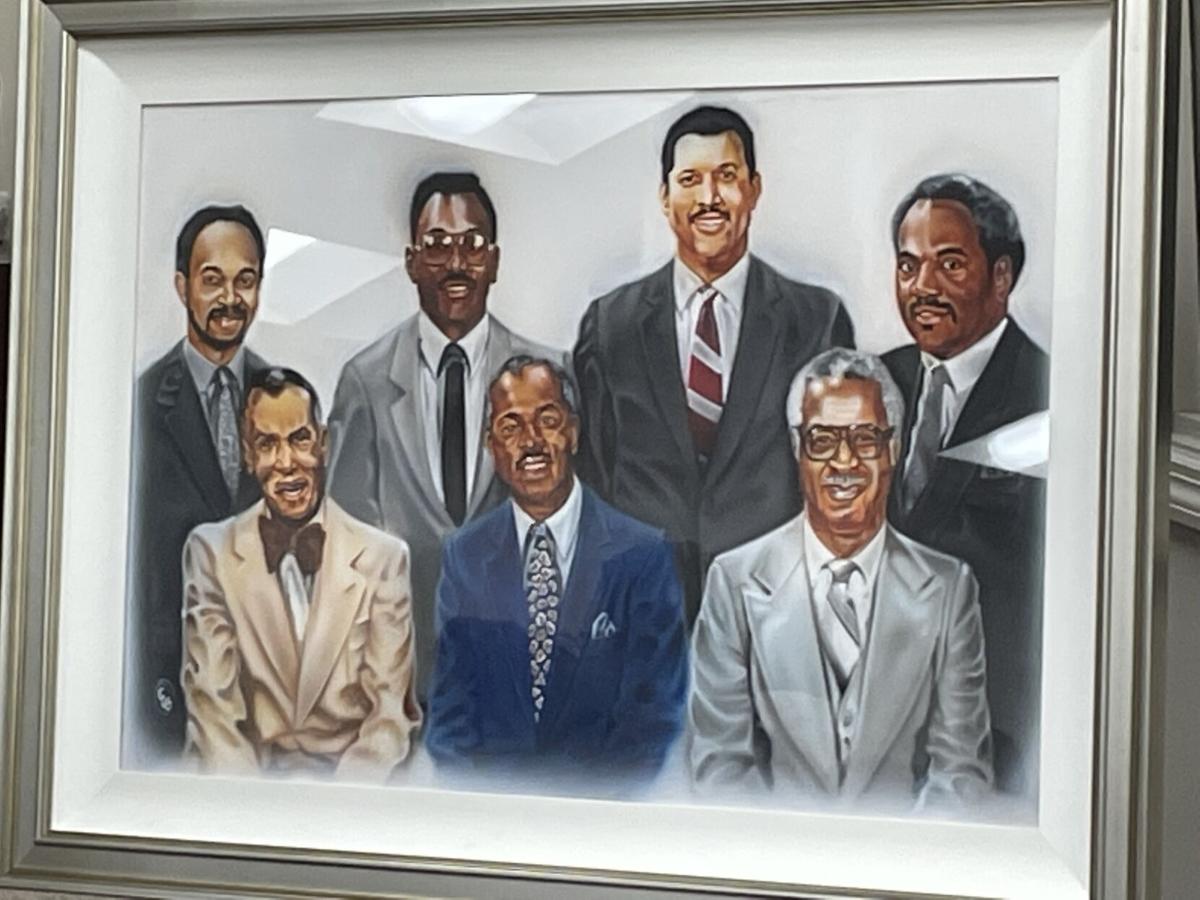 A painting of the seven plaintiffs was unveiled at Tuesday night’s recognition ceremony. 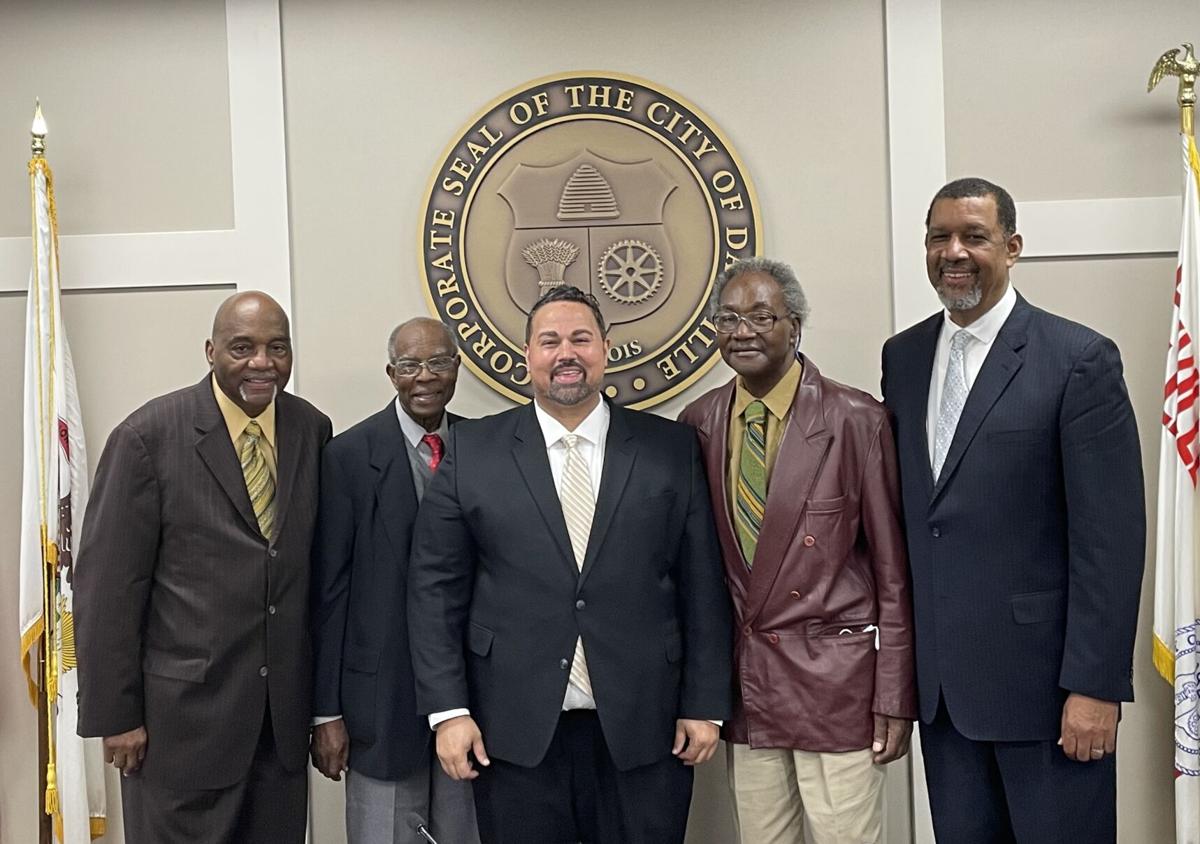 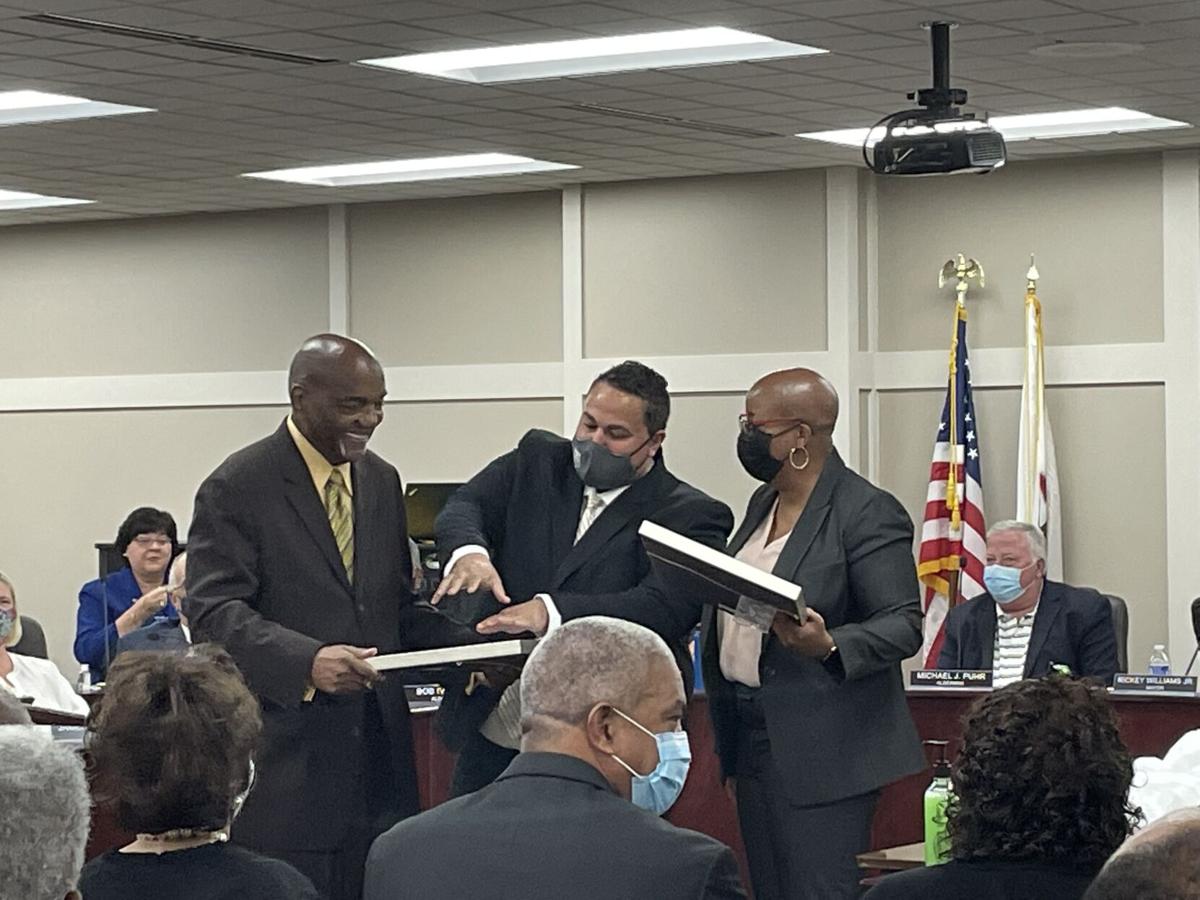 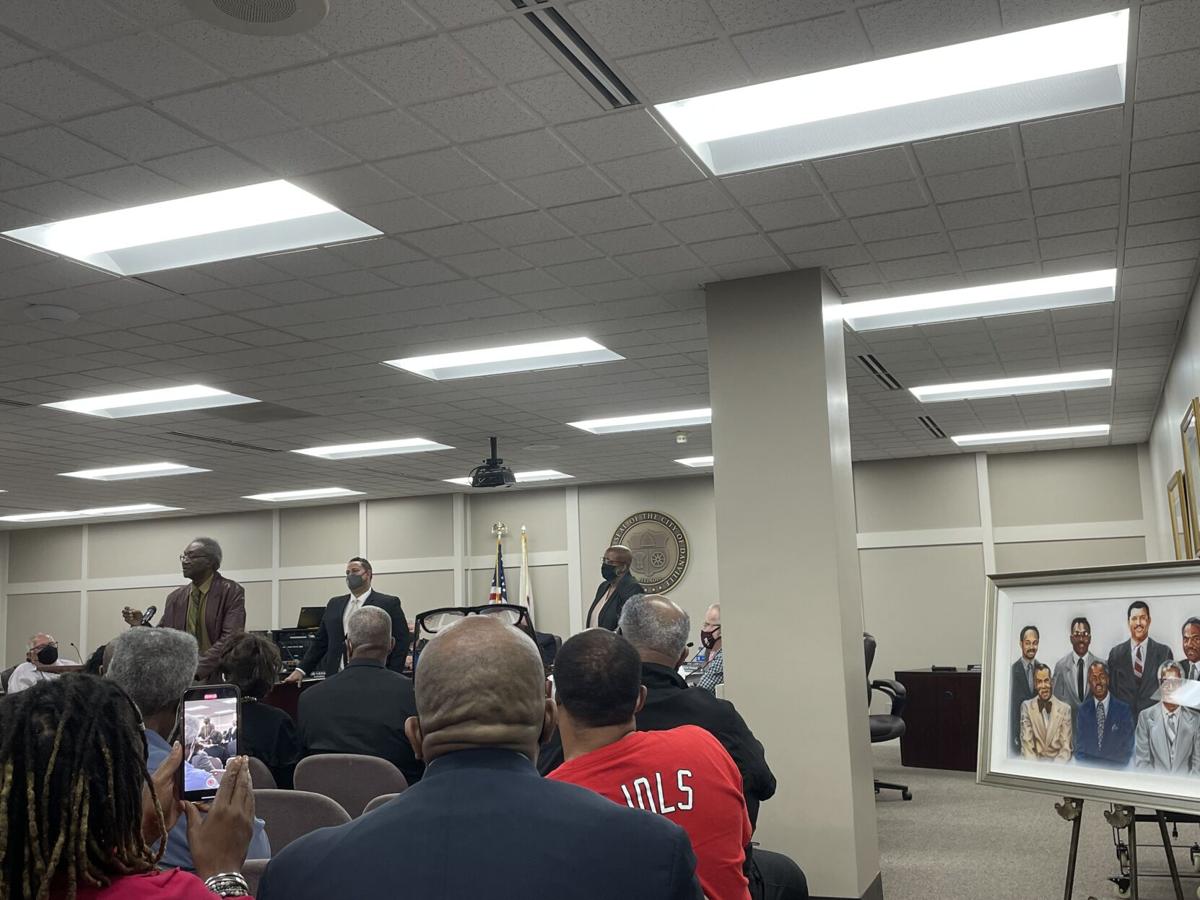 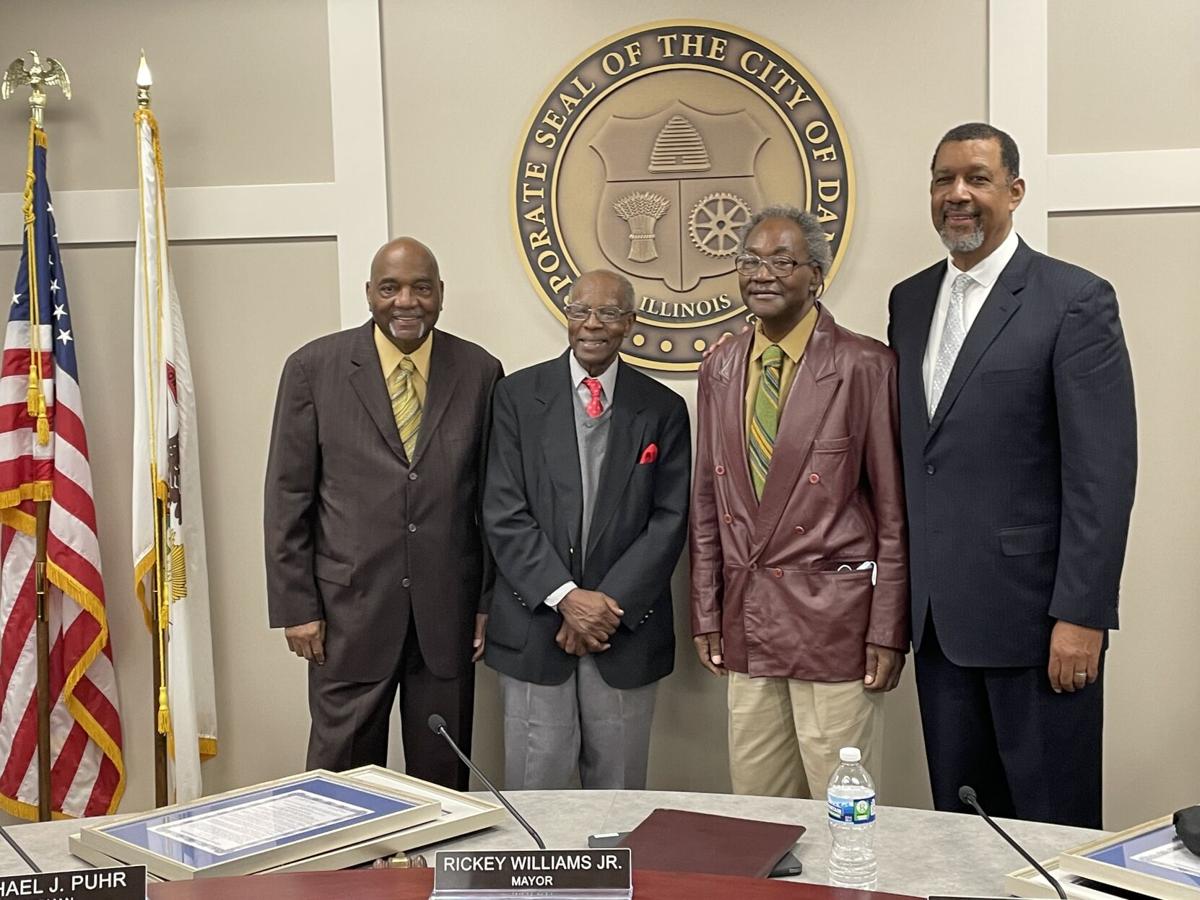 A painting of the seven plaintiffs was unveiled at Tuesday night’s recognition ceremony.

DANVILLE — It was 34 years ago that seven men risked their lives and livelihoods to change Danville’s form of government in 1987.

Four of the plaintiffs and family members of three who are deceased, reminisced about that time in the city’s history and their strong desire to see a diverse city council, and urged citizens today to work to make the city better with Mayor Rickey Williams Jr.

Several said there’s been a lot of progress, but as Eugene “Radio” Thompson would say, “the struggle continues...”

There was a ceremony to honor the seven plaintiffs at Tuesday night’s Danville City Council meeting.

The plaintiffs and their family members heard Williams first read a city proclamation approved by the city council declaring Sept. 21, 2021 “7 Plaintiffs Day” in the city of Danville.

The proclamation reads, “Whereas, on Jan. 14, 1987, Albert Derrickson, Eugene Thompson, Roosevelt J. Davis, Bashir Ali, Frank Abram, Nate Cunningham, Sr. and Wence H. Cunningham, Jr. better known as the ‘Seven Plaintiffs,’ filed a lawsuit against the city of Danville, Illinois for violation of Section 2 of the Voting Rights Act, and requested that members of the city council be elected from single member districts rather than in at-large elections; and

“Whereas, the court found that the lingering effects of segregation and racial isolation in Danville created socioeconomic disparities between Black and white citizens in the fields of employment, education and income and these disparities showed the existence of racially polarized voting,

“And whereas the court found that Black citizens were unable to elect candidates of their choice, and that no Black person had been elected to the city council in the 60 or more years of its existence under the commission form of government; and

“Whereas, on Feb. 3, 1987 in order to settle the lawsuit and cure any possible violation of the Voting Rights Act, the seven plaintiffs and the city entered into a consent decree which ordered that Danville be governed by a council and mayor and be divided into seven wards which elect two aldermen per ward.”

The city council adopted the final consent decree, and the first Black aldermen were elected in Sept. 1987 — Eugene Thompson and Les Brown in Ward 1.

“And whereas the seven plaintiffs’ decision to fight for the rights of African-Americans and other minorities changed the trajectory of the city of Danville; and will forever be known as one of the greatest acts of courage in the city’s history,” Mayor Williams said emotionally.

Springfield saw a group of concerned community activists in 1986 file a lawsuit against their city being in violation the voting rights act. These actions and verdict, inspired the Danville seven in their own community.

Bennett said the seven men put their reputations and lives on the line.

“These sons of Danville changed our history for the better...,” he said.

The plaintiffs and family members heard from Ward 1 Alderman Robert Williams who said they were courageous in coming forward, and left a legacy.

“I want to thank you for me being here,” he said about being a current aldermen.

Mayor Williams too said to the plaintiffs, “there is no me without you.”

Ward 1 Alderwoman Brenda Brown and Ward 3 Alderwoman Sherry Pickering read the names of Black aldermen and women aldermen who have served on the city council since the government change.

Nate Cunningham Sr. looked around at the Black and white men and women current aldermen and said “that’s America.”

City officials unveiled a painting made with modern technology, Mayor Williams said, of the seven plaintiffs together.

The portrait will be placed inside city hall and Laura Lee Fellowship House, and the plaintiffs and family members also received copies of the portrait.

“We thank you for this distinguished honor,” she said.

Davis said so many people in that room 34 years ago could have been a plaintiff.

Davis also said he was a different person then. He’s almost 85 years old.

Ali said Thompson and Derrickson mentored him. Thompson was a fireball and loved to talk. He was full of passion and a tireless worker for the community, Ali said.

Ali said Derrickson was very wise, cerebral, a strategist and a very kind and loving person.

He thanked the community that supported the effort and what has brought us to this point.

The consequences were secondary to the struggle, Ali said.